Pros: Excellent, slightly forward, yet not sibilant treble, Musical, yet highly detailed midrange, Outstanding build quality
Cons: Drivers a bit heavy and slips down your ears (impossible to wear over ear)
Prior to purchasing these, my primary concern is to have a proper alternative for my ESW9 which have  better isolation to be used for listening to my ballad tunes on the road. While I don't have any issues with louder tracks, with more subtle ones, my ESW9 aren't up to the task, and so my search began. Actually, I'm not really keen on the idea of using an IEM since they irritate my ears quite easily, but given the situation that finding a perfect sound as my ESW9 is quite difficult, I had no other options. I've research enough and eventually stumbled on these e-Q7s. With all the glaring reviews I've read on this forum and on other sites, I decided to get them, which proved to be the best decision I've made so far. All fireworks lit up!

Upon opening the small box, you will be greeted by another box, one that mostly used on jewelries. It's a fine luxurious box. Opening them (in a luxurious fashion) reveals the IEMs themselves, pleasantly placed in a small recessed enclosure. Along with it are the accessories which includes 2 pairs of silicone tips (M, L), a pair of foam tips, 3 pairs of dirt filters, 2 enclosure rings and a toothpick, and a rather snazzy zipper pouch. It's large enough for both a medium-sized player and the IEMs. I use them to store my Cowon J3 along with the e-Q7.

The casing (which referred by the manual as the 'acoustic chamber) is made of aluminum, milled to perfection by a master machinist, or so it says on the manual, but regardless, looks good and very well built. The strain relief holding the cables are made of flexible rubberized plastic. The cables connected to the drivers are your typical rubber wrapped wire. The manual says the wire is covered by pure silver plated OFC, I'm not familiar with those kind of stuff though 'audiophiles' seem to regard them as good quality wires. At the Y ends, downward however, the cable is sheathed with fabric. I've read from some reviews that it seem to generate a lot of cable noises or the so called 'microphonics' though I haven't experienced them so far, but maybe I just tend to clip the Y end to my shirt just below my collar bone as the drivers are a somewhat heavy and slips downward, and even though the manual states that it can be worn over the ears they didn't include ear guides to secure the wires in place. It's quite a nuisance to wear the e-Q7 that way since I always wear glasses, so I just pin the Y splitter on my chest.

Since I have a rather imperfect ear shape, having a perfect seal is a bit difficult on this e-Q7. It took some time before I settled with the perfect fit (with the large tips) but unless your ears are like mine, getting a good fit with the e-Q7 should be no biggie. I also tried the added foam tips, and while they isolate more than the silicone ones, the treble doesn't seem to respond well. Because of the drivers' weight (as stated earlier) they tend to slip down your ear, even while walking, not ideal if you intend to use them as your work out partner. Isolation is just fine, not total black out, but very tolerable. It's just the ideal isolation for me since I always commute and being isolated too much can be dangerous.

The sound is rather new to me, at that It's my first time wearing an IEM coming from majorly on-ear headphones. Mostly, I'm more inclined to a sonic character with  warm and easy sound with some euphonic weight to it, thus, the sound on these e-Q7s seem to stray away from my preferences. Not that I don't like it, I actually fell in love with it! Like the ESW9, it shares the same euphonic sound of its midrange, yet have more sparkle to it, giving more clarity and detail on the tracks I listen to. Despite this, I would not consider the e-Q7 a warm IEM (or cold, or dry) at all. They're rather a balanced type with richer, musical sound while still retaining its speed and detail.

I've given my e-Q7 a total of 3 weeks (3-5 hours a day) run time before the writing of this review and never noticed any sound improvement at all on my unit. Others' experience may be different though. Mileage may vary from ear to ear as they say. Since this IEM was bought primarily as my on-the-go alternative to my ESW9 with better isolation, most of the comparisons stated below are between those 2 phones to see if the e-Q7 will fit to the task.

*Bass - This is where the ESW9 tops the e-Q7, quantity-wise. There isn't enough body on the e-Q7's bass, particularly the mid-bass regions. Needless to say, bass freaks need not apply.  However, what the e-Q7 lacks in quantity makes it up on quality. It can produce low-end bass from which my ESW9 struggles with. It is well textured and excels in its timbre that sounds natural and pleasing. Despite the
deficiency in the bass, I don't feel like tweaking it with an EQ like I always do with the rest of my gear, it's just perfect with all my Japanese ballad songs.

*Midrange - This is one's hard to justify. Perhaps it will drain down to personal preference in my opinion. The e-Q7's midrange is highly detailed, with superb transient speed. It's all there, nothing's missing, yet, it is not thin sounding. It's lush, euphonic and very dynamic. It's slightly forward in that regard. The ESW9 is not far behind, only different in approach. It is a bit laidback in presentation yet not lacking, same as the e-Q7. Although it can be sometimes a bit distant sounding and can be unnatural in some music tracks.

*Treble - This is where the e-Q7 obliterates the ESW9 completely. The treble on e-Q7 gives that sparkle that I miss on my ESW9, particularly in the low treble region (high midrange) where instruments (particularly cymbals and hi-hats) and vocals can sometimes lack in presence. It's also much airier, more cohesive, and more detailed. It adds to a more cohesive soundstage.


*Soundstage - Pretty good as well. For a tiny sound equipment it can really provide a wide enough amount of space. Add the superb instrument separation and you have a grand soundscape to enjoy. Something you usually hear in full-sized headphones, though not the 3D soundscape you hear in open back, full-sized designs.

Well, this came as a big surprise. What I expected to be a proper alternative came out to be an upgrade. A huge one at that. But then again, considering how the e-Q7 was tuned It's rather  improper to compare a monitoring in-ear to a casual headphone in the same aspect of simply enjoying music, and the ESW9 is designed that way. So no matter how badly beaten, my ESW9 is here to stay. Forever, like a great work of art!

As far as Ortofon is concerned, they really made a huge entry in the market. It just proves that more drivers doesn't necessarily mean better sound quality,  and you can only expect the technology to improve in time. That is something to look forward to in the coming years for me.
Pros: Beautiful airy presentation with great timbre
Cons: Microphonic cables. Available only in Japan (excl grey market)
This review will have a lot of references to the e-Q5 which will be explained later.

Again, like the e-Q5, the presentation and the packaging of the e-Q7 is impressive. It comes in a box, and a carry case in addition to the extra flanges, filters and tip cleaner. 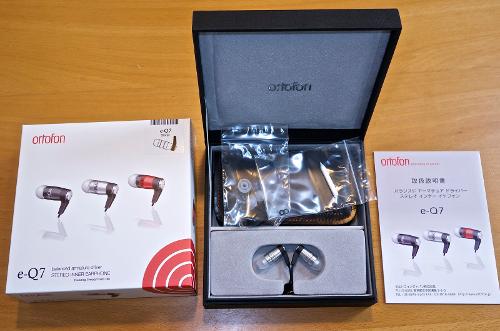 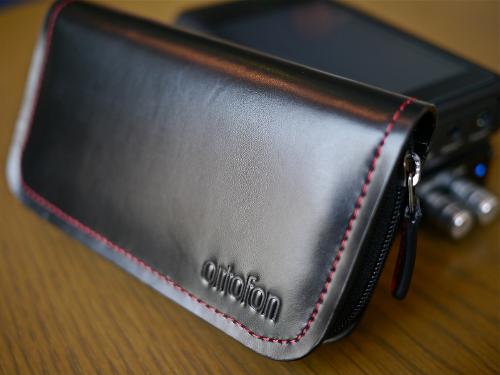 The big difference in the cables aren't only with it's construction but also the way it's cloth-material wrapped. The cables are as such somewhat less tangle-free but somewhat introduce microphonic vibrations.

The cables also come down perpendicular making it easy to wrap around the ear if desired with less stress on the joints. Strangely though, the isolation on the e-Q7 seems to be tad less than the e-Q5 and possibly the extended length appears to be add weight to the ends pulling the earphone down a tad. I've not tried different flanges to see if it improves isolation. 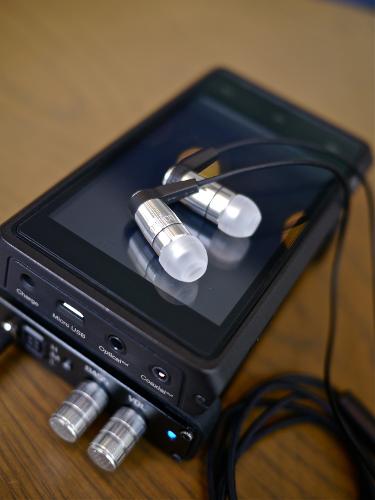 Since the balanced armature is the same as the e-Q5, a lot of my impressions are in comparison to the e-Q5 - to see the difference in SQ between the OFC cables vs pure silver plated cables.

Acoustic instruments sound more refined, controlled, & clearer than the e-Q5. Somewhat with more finesse, detailed & less mid-forward. There is still the mid hump, but its a tad pulled back in comparison to the e-Q5. The mids also sound a little more detailed, and overall, I'd say the eQ-7 is a tad more balanced & a little more neutral than the e-Q5.

The trebles seem a little bit more airy, detailed & can be somewhat revealing to tiny details in recording, more so than the e-Q5.

The soundstage is also slightly larger than the e-Q5 but depth-wise is the same. It maintains the airy tube-like presentation of the e-Q5. The e-Q7 also adds a little more depth to the dimension. I'd also rate the a better timbre than the e-Q5.

As with the e-Q5, these earphones deliver a lot for it's online street price of Y21,400 (USD$270). Whether the e-Q7 is worth the extra USD$95 over the e-Q5, that's a more difficult question. Purely in terms of SQ, it's harder to justify. However the e-Q7 does provide a nice box for storage and carrying case for transporting around; in addition to the SQ improvement over the e-Q5. 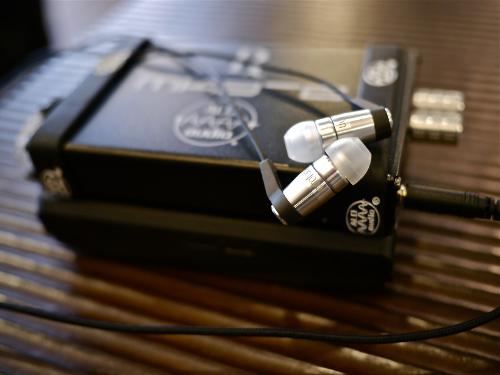