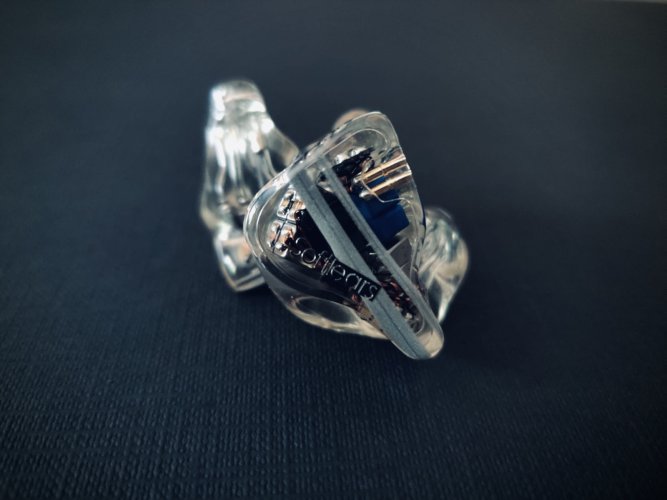 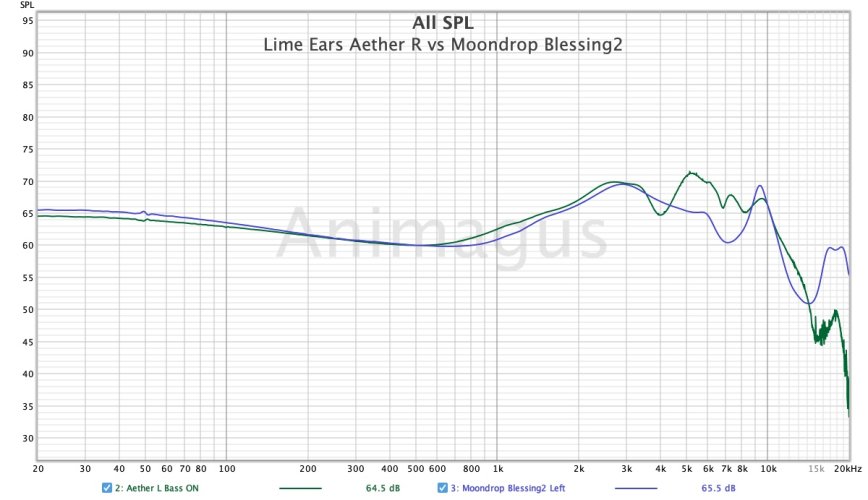 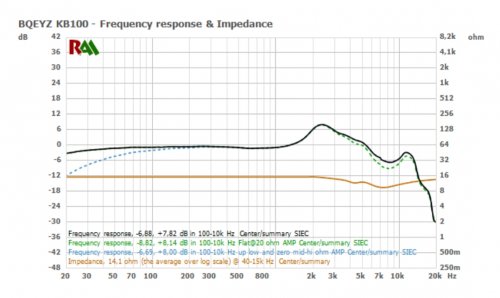 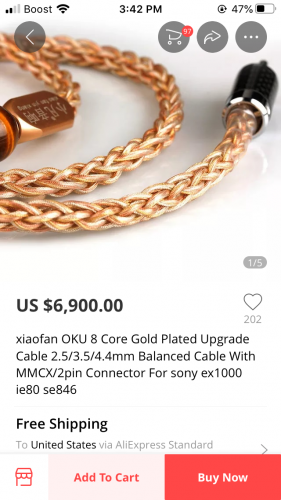 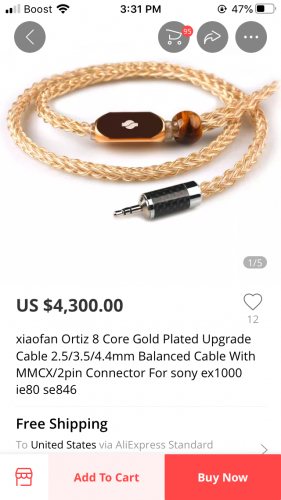 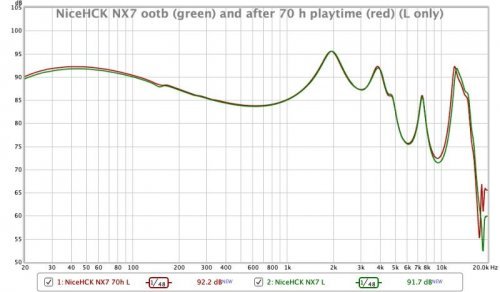 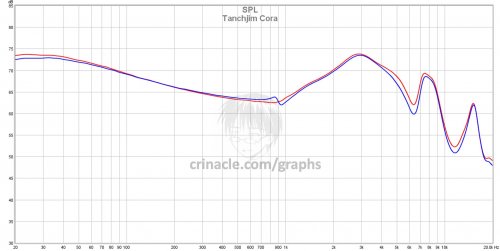 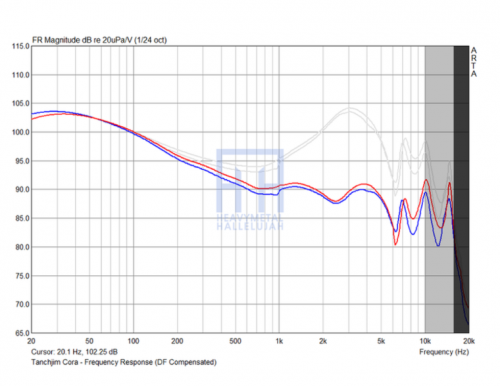 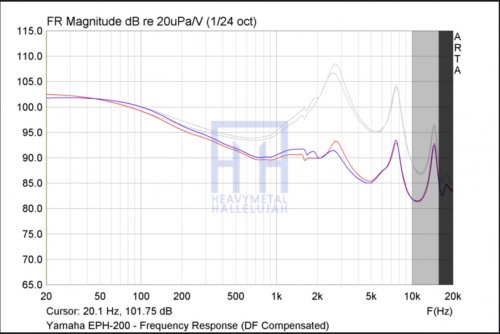 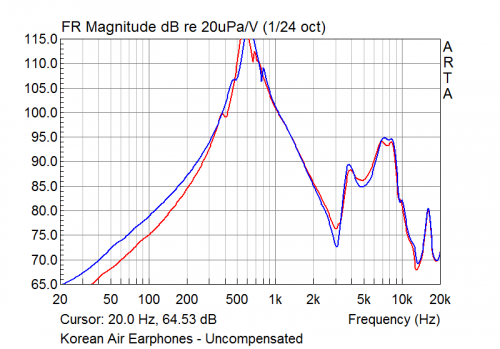 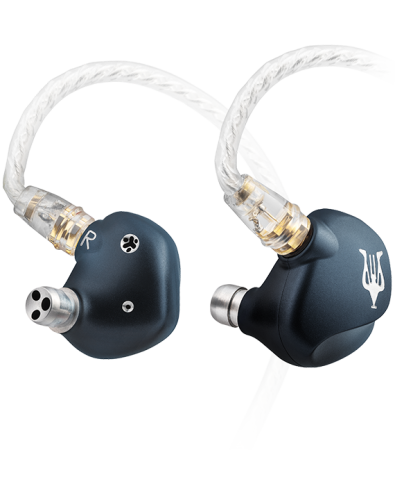 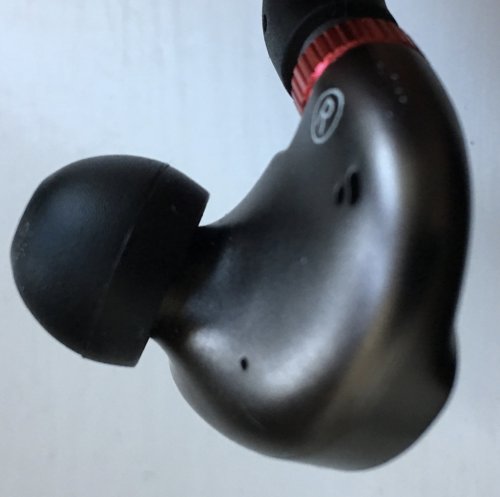 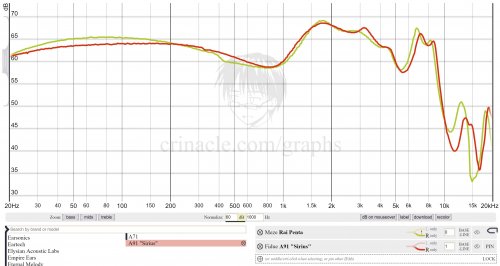 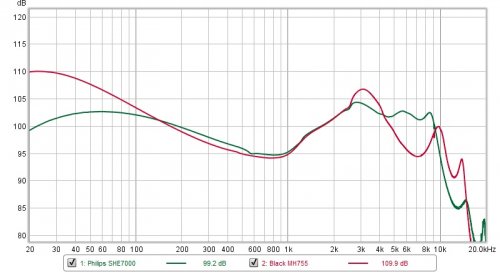 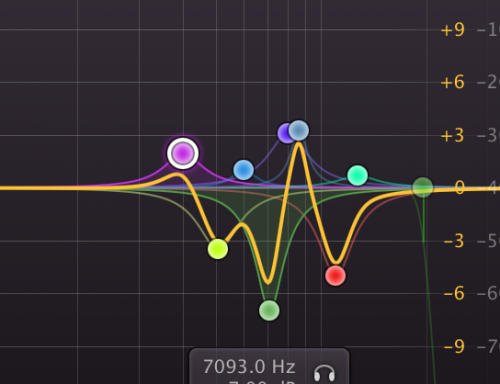 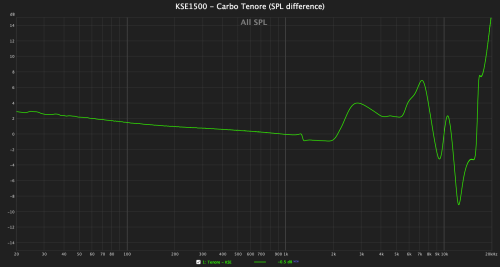 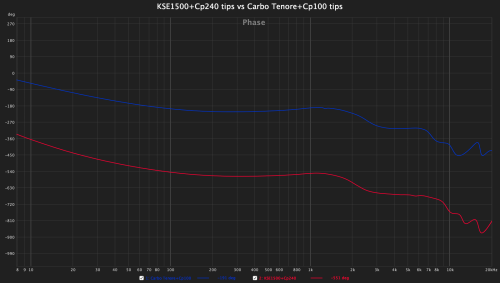 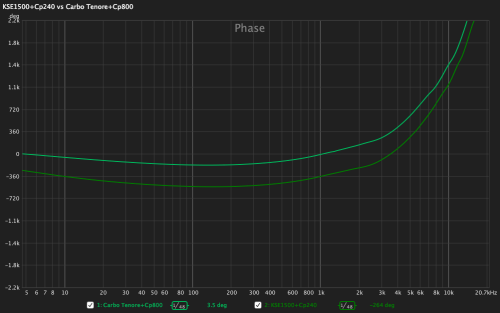 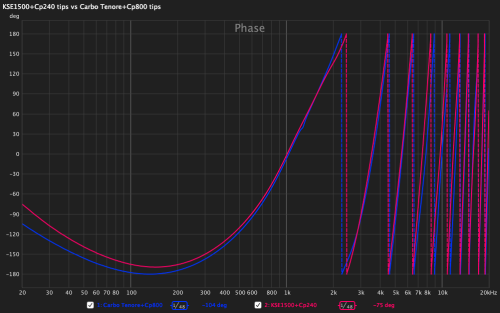 You are using an out of date browser. It may not display this or other websites correctly.
You should upgrade or use an alternative browser.
crinacle's IEM FR measurement database

crinacle said:
Yeah, the IMM6 is quite the fragile piece of equipment. But if you superglue the capsule part down, I think it can last a pretty dang long time. Case in point: Mine had been used, abused and gone through hell and back over the course of a year. The input connection is shot and the capsule tip is now in a permanent weird angle, but it still works. But hey, the way I see it it's meant to be a cheap way to measure sound on a phone. I doubt it was built to withstand years worth of use and even more doubtful that it was built to allow the installation of a coupler (hence the casing getting ripped off in all these specific situations).

You could sidegrade to a Veritas for something more durable or a miniDSP EARS for something with a measurements base you can reference against. But if all these are for measurements that you do once in a blue moon then I think it's best to just get another cheap IMM6 (or something similar, its particular design is pretty common) and use it till it breaks.
Click to expand...

I just got notified that my mic is being replaced under warranty.
Find more of my write-ups here: https://www.audioreviews.org/author/jkraus/

I'm probably going to get the Dayton to do my measurements. It's cheap. What couplers do you guys find more precise? Anybody try any ear dummies?

SilverEars said:
I'm probably going to get the Dayton to do my measurements. It's cheap. What couplers do you guys find more precise? Anybody try any ear dummies?
Click to expand...

You don't need an artificial pinna if you're just doing hobbyist-level IEM measurements. Just get 8mm inner diameter tubing to act as a coupler, though that might be too small for a lot of nozzles so I suggest fitting an additional 10mm inner diameter tube on top of that to accommodate.
If it's not on the list, it doesn't exist
crinacle+​

Does anybody have experience with this software?
http://www.artalabs.hr/index.htm
Find more of my write-ups here: https://www.audioreviews.org/author/jkraus/

It's been quite a long time, but better late than never. For those who have donated to my GoFundMe all the way back in March (special shoutouts to Head-Fiers @EagleWings and @flinkenick, apologies to the rest whose handles I do not know), I thank you again. You've made the following possible.

May I present to you the prototype concept of a portable, single-channel headphone measuring rig: 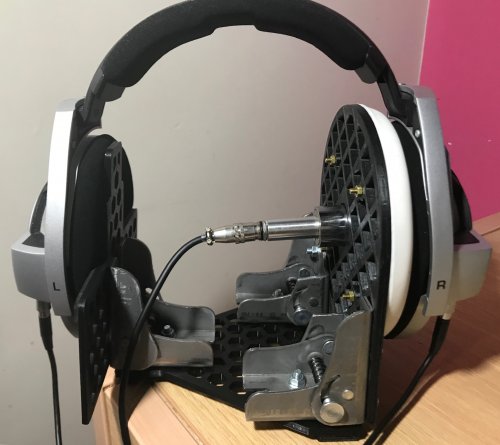 ​
Built by @WaffleIron with 3D-printed plates, 90-degree folding hinges and the miniDSP EARS silicone blocks with artificial pinnae, so as to accommodate the use of an IEC coupler. Initial designs were drawn up fairly early but there were issues with the 3D printer and the sculpting of the silicone block to specifications, thus the long delay. 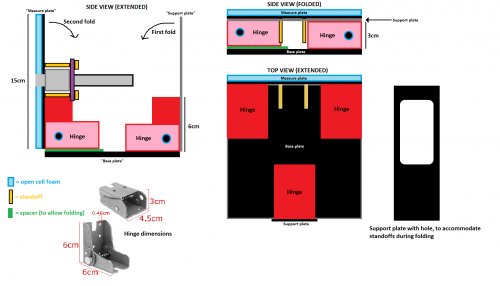 Original schematics (to scale)
​
And of course, the fact that it folds allows for compact storage as well as the separation of microphone and headphone stand. 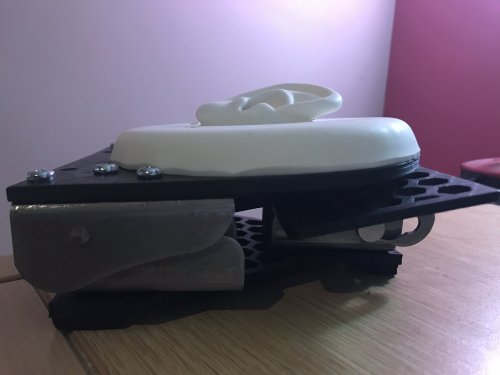 Fully folded
​
Here is the first test with the only headphone with me right now, a Sennheiser HD800 with SuperDupont Resonator (raw, 5 placement average per channel, 1/12 octave smoothing):

​
As usual, the caveats and disclaimers:

Sweet rig. Anytime man, but my contribution was quite small. Looking forward to the measurements.

EagleWings said:
Sweet rig. Anytime man, but my contribution was quite small. Looking forward to the measurements.

Btw, do you have the original SDRs from sorridge, or is it a DIY foam SDR?
Click to expand...

Originals.
If it's not on the list, it doesn't exist
crinacle+​

As a start, this is what you need:

1) A computer
2) The REW software (free download: https://www.roomeqwizard.com)
3) A USB microphone OR a calibrated measurement microphone (like this Dayton imm-6)
4) If you don’t have a USB microphone but the second kind (“Dayton”), you need an USB audio adapter such as this one between the mic and the computer’s usb port
5) Female to two male arphone mic audio Y splitter (to connect the mic with the usb audio adapter)
6) An external dac/amp with volume control connected to another of your computer’s usb ports (I use the Schiit Fulla but could also use the Shanling M0, for example)
7) A sound meter like this one

More later. I am presently on the "workflow". With this you cannot only check out the flavour of an earphone, no, you can also QC its channel balance, for example. 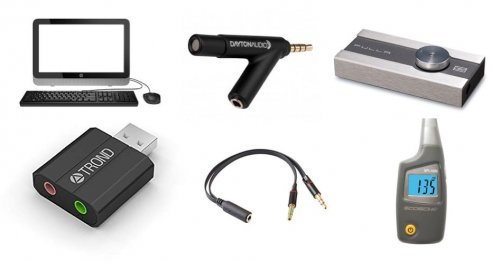 And that’s all, folks…always good to get the big picture right away.

An exercise in graph manipulation​
There seems to be a worrying trend of audiophiles taking manufacturer's graphs as the absolute truth and dismissing everything else that looks dissimilar as inaccurate. While it may be true that manufacturers are typically the ones with access to highly accurate, industry-standard, multi-kilobuck measurement gear, it is also in their own interests to ensure that whatever data they publish is as "pleasing" to the consumer as possible. While the raw data itself may not be directly modified, there are still many ways to "trick" the reader.

In a way while this may be an educational post, this is also protection against myself in case anyone tries to compare my graphs with the manufacturer's. Just because the measurements are different doesn't mean they're wrong.

There are some ways to make a graph aesthetically pleasing without actually fudging the raw data.
Taking the BGVP DM6 as an example since they seem to be a popular IEM these days (and also because I have one with me right now). Below is what I found on the official store, assumed to be performed on a standard IEC60318-4 system (and posted various times around the forum to show how "flat" it is): 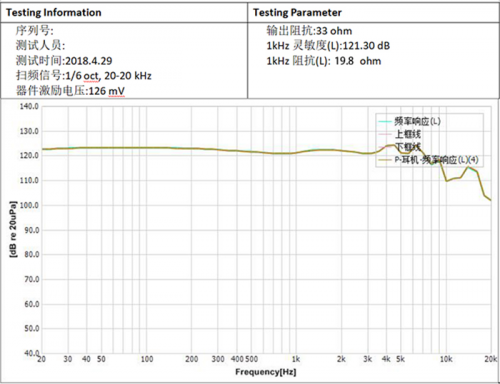 ​
And here is mine based off my own rig (also IEC60318-4) and procedures that I follow with every measurement I perform: 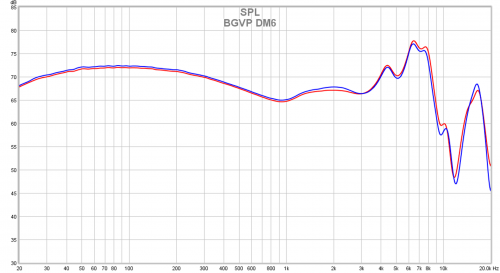 Smoothed at 1/12 octave
​
So why is my graph different from the manufacturer's? Is my setup wrong, or is their setup wrong? The reality is that both of our data can be "truthful" and yet be displayed differently; I can get a near-identical graph to what the manufacturer provided if I simply reverse-engineer their settings and procedures (most of which they have thankfully provided). What I've determined is the following:
The final result matches the manufacturer's graph almost to a T:

​
To reiterate my point again, just because two graphs are different doesn't necessarily mean that one has to be wrong while the other has to be right. Just like with reviews and impressions, don't just take data from a single source; seek out as many as you can before forming an opinion.

Stretching out the vertical axis is a common thing I see manufacturers do. The way I see it, manufacturers will do what they need to do to sell units. It's up to us to figure out what those axes are. What disturbs me more is that many of them QC/development test their IEMs on similar axes, putting their testing acumen in question. 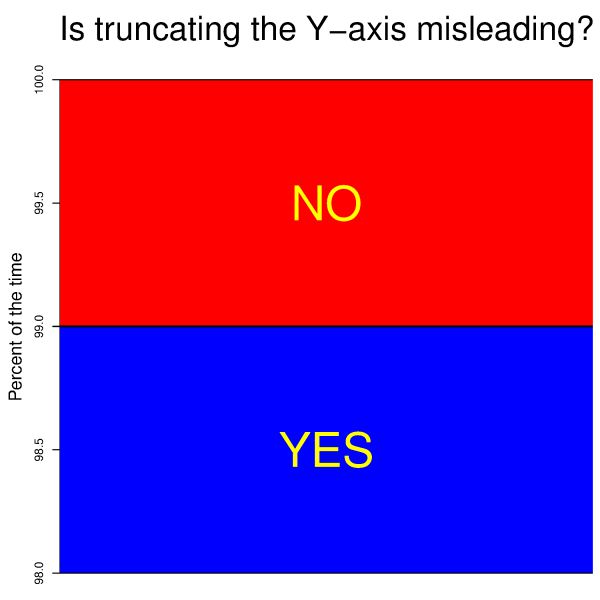 Just want to say thanks to @crinacle for these measurements. I find them to be very helpful and very accurate as to what I hear with my own subjective trials. I own the U18t and find that your measurements were spot on to what I heard.
Last edited: Nov 24, 2018
https://www.facebook.com/RivulBand/

My favorite is Fever!
You must log in or register to reply here.