Pros: Top class bass
Lightning fast and defined transients
Imaging & Separation
Immersive soundstage
Dynamism
Resolution
Flat electrical phase and impedance
Cons: Uneven treble harmonics (more on the review)
Slightly shrill/shouty midrange
Introduction
The Craft Ears CRAFT SIX is CE's newest flagship IEM with a 6 BA configuration. Where it differs from your typical multi-BA setup are the resonance chambers attached to the subwoofers and the supertweeters. The subs are attached to a long and low ID spiral shaped low pass filter (ala 846/ACME8 but much longer in length) and the tweeters have a horn to further extend its high frequencies. It also promises a flat electrical phase and impedance which is very rare in the case of multi-BA iems.

Onto the sound. I'd describe CE6 as a W-shaped signature. The troughs (of the W) are at its upperbass-lowmid regions and the low-mid treble. I do hear the subbass (20hz-100hz) as being very cleanly boosted & free of any sign or form of midbass bloat, uppermids (1khz-4khz) seeing a harman/DF-like gain and upper treble (>10khz) being MASSIVELY lifted. The immediate hook is the aggressive and engaging presentation of sound. 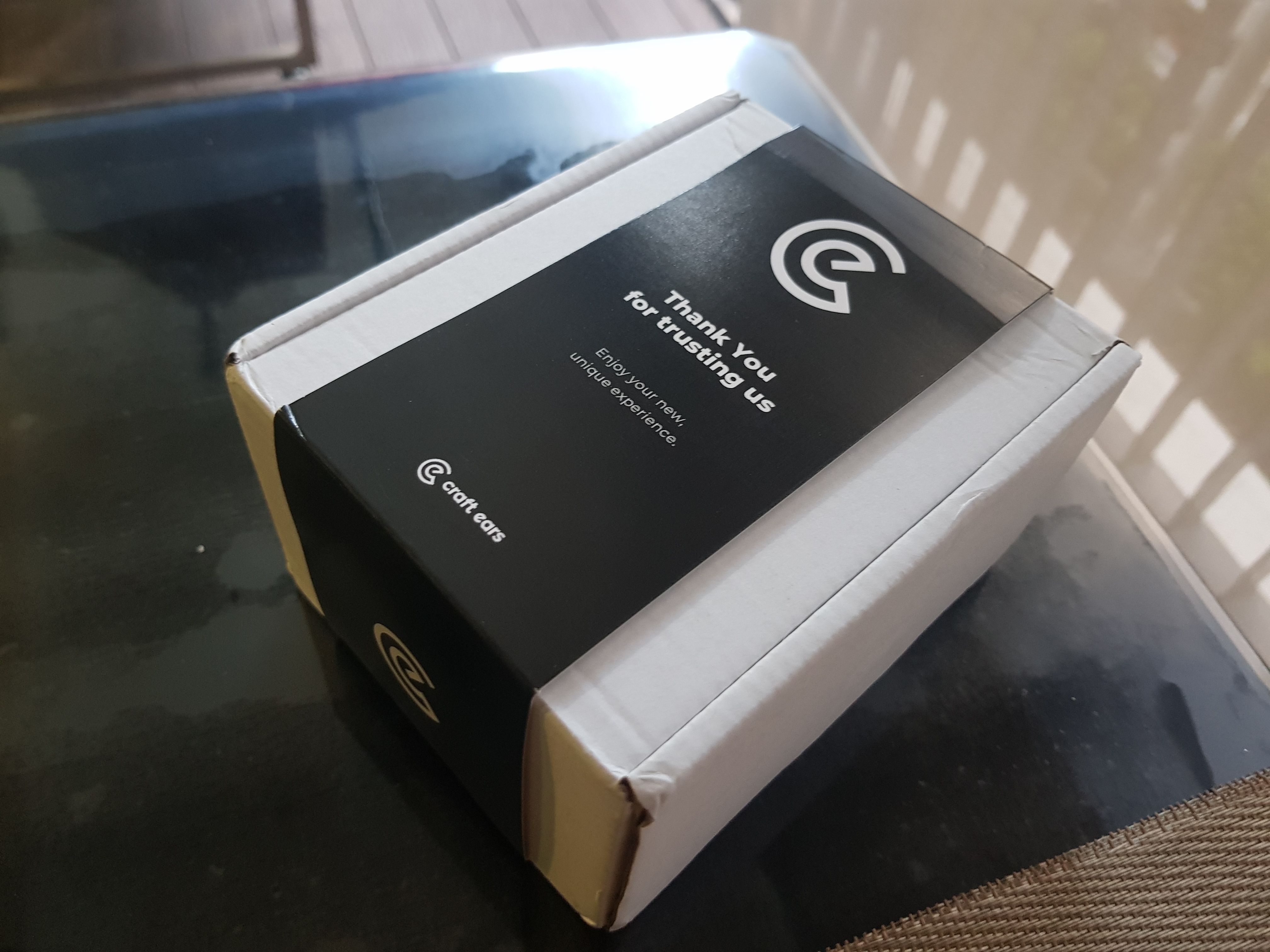 The earphones & its accessories were packed in a simple cardboard box filled with bubble wrap. Nothing extravagant. Nothing extra to comment here. 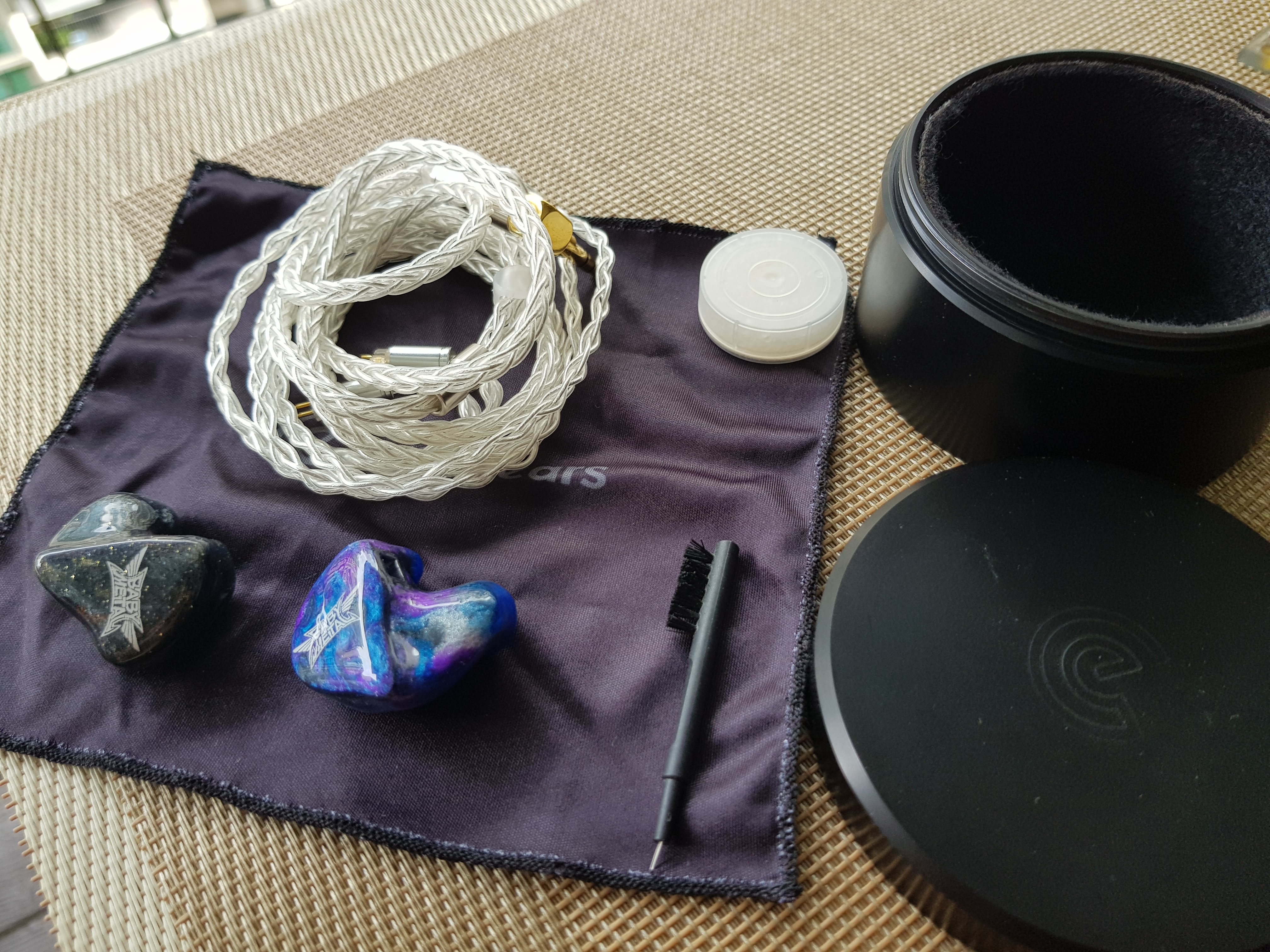 The CE6 were shipped in a very sturdy aluminium case with desiccants, a cleaning tool and a microfiber cloth. I was also greeted by a pleasant aroma which added a nice touch to the experience. Not sure exactly what flavour was the aroma but it still lingers nicely after weeks of me owning it. It really adds to the unboxing and to the overall experience. 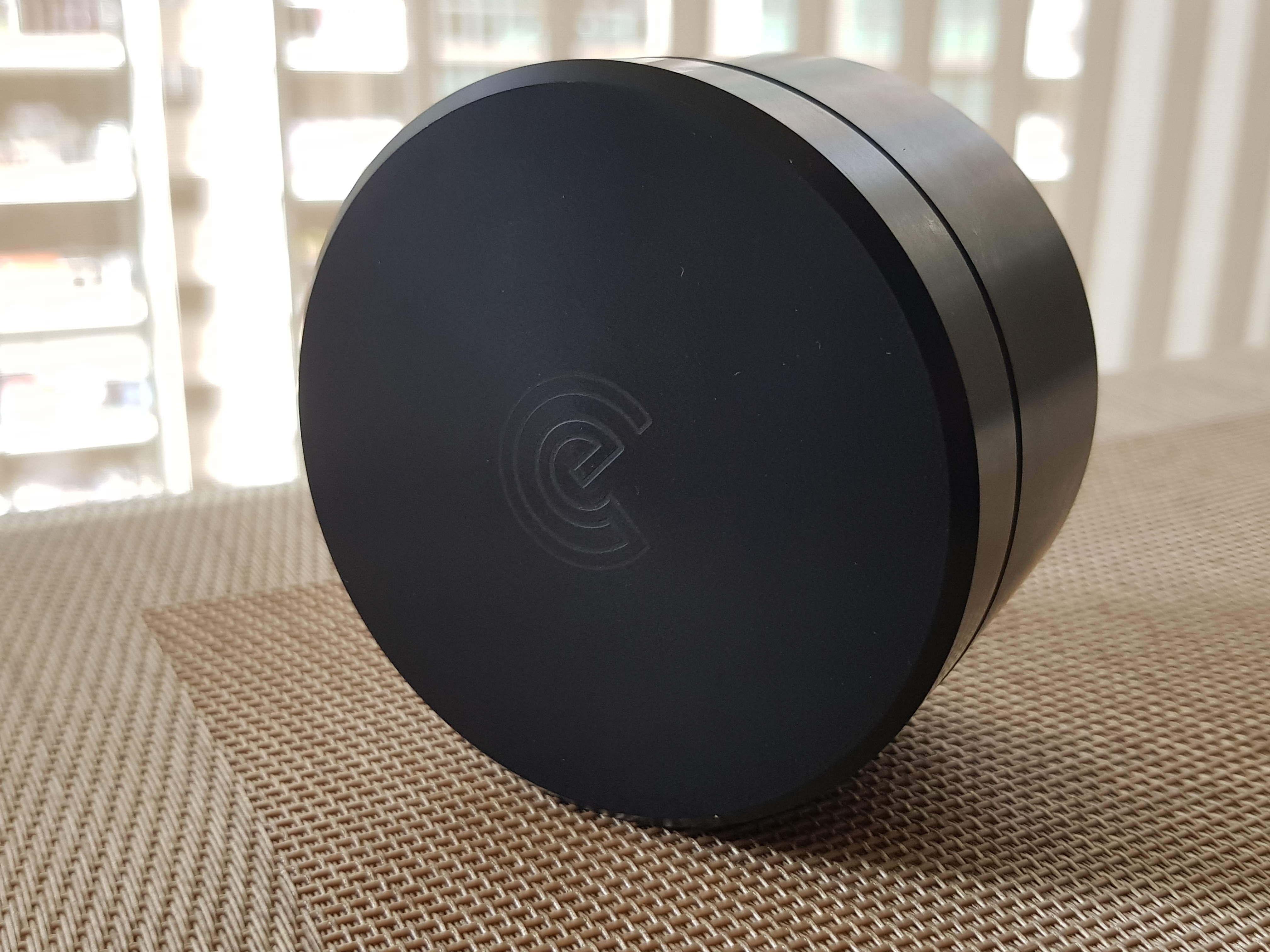 The aluminium case is incredibly sturdy and from what I know, is self-made by Craft Ears themselves. Jedrek (owner of CE) is specialized in the trade of lathing and has the machinery to make his own cases. 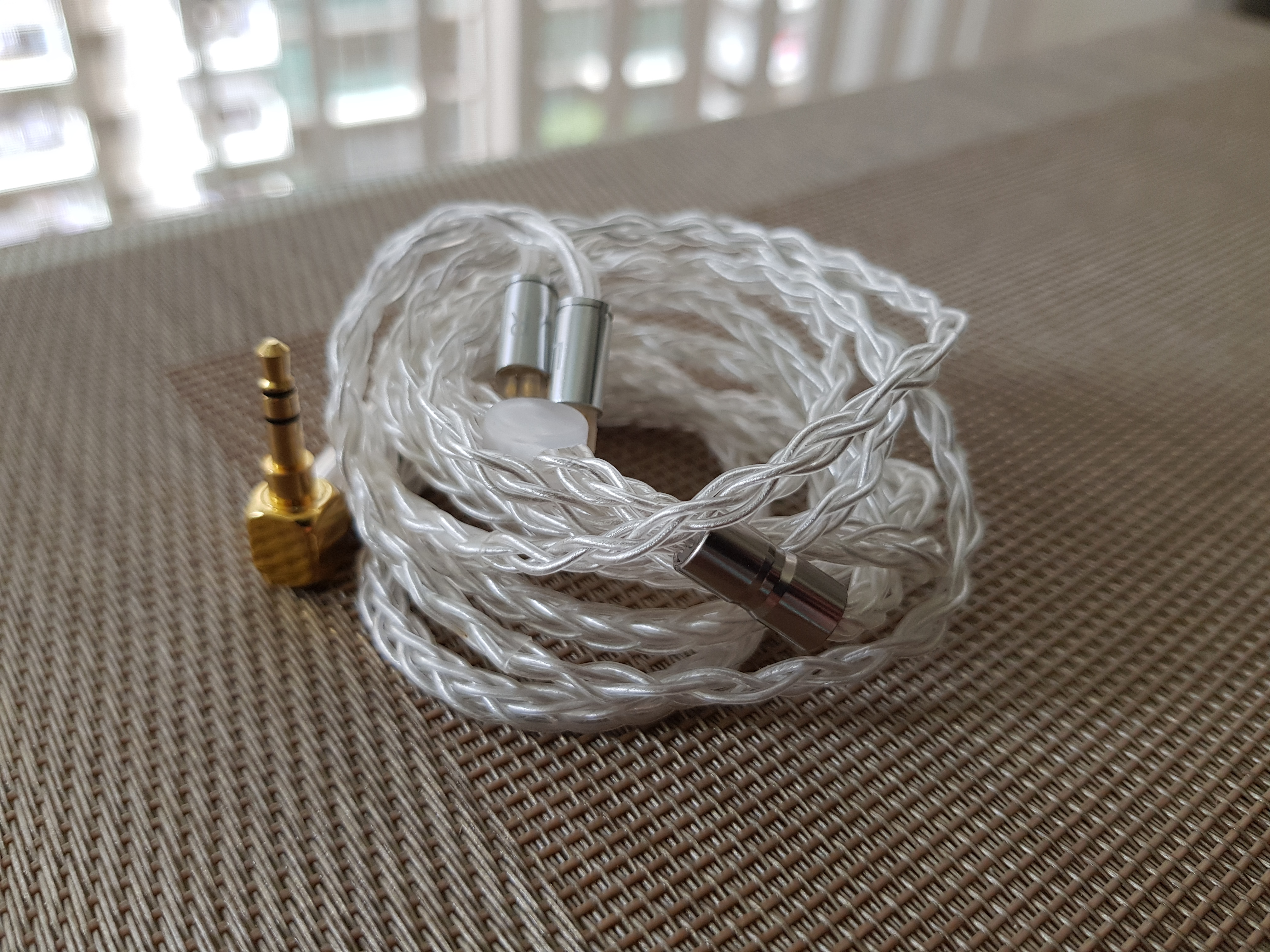 The stock cable of the CE6 is an 8-wire braided SPC cable. It's pretty soft with a slightly waxy feeling on its sheathing It's nice as a stock cable but I still do prefer those cheap 4-wire throwaway cables since they are lighter and thinner. Nothing wrong with the 8, just that 8 core cables are thicker and heavier. 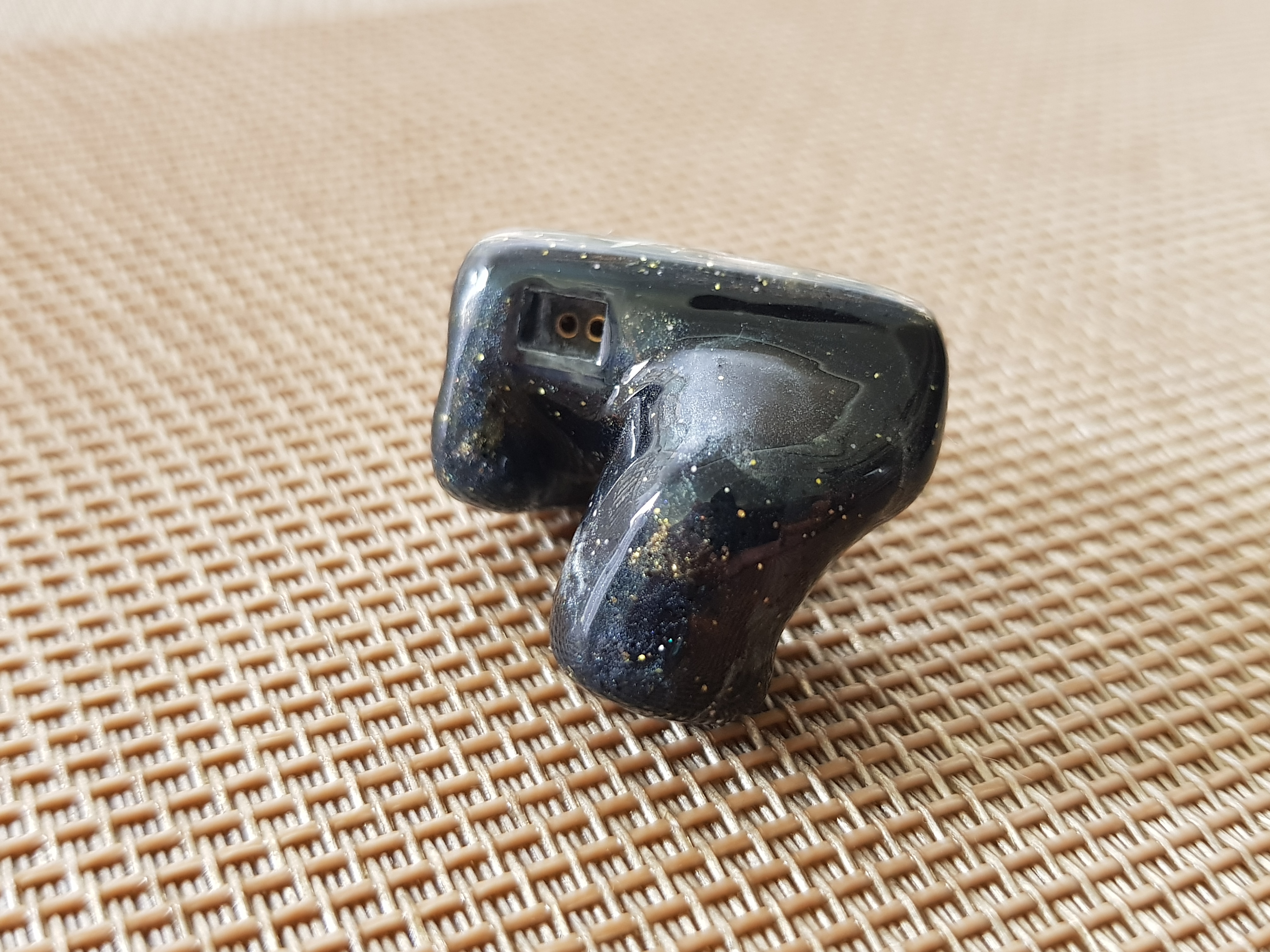 I requested Jedrek to make recessed 2-pin many months back and he delivered! The previous Craft FOUR that I received had a flushed connected and I provided feedback to Jed. Happy to see a recessed connection here. It's sturdier and feels more reliable. 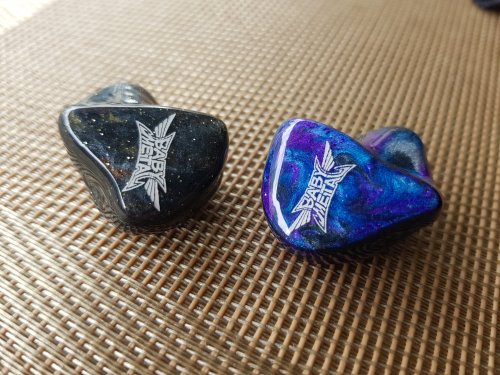 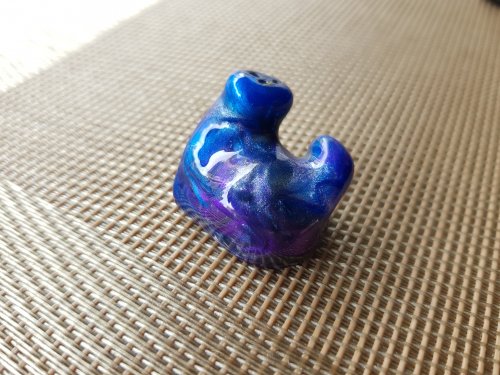 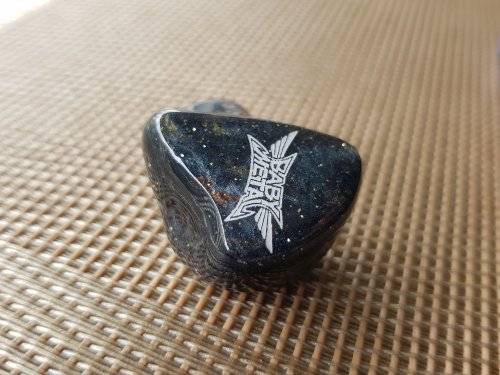 Immaculately finished with plenty lacquer and a beautiful galaxy-like design that I requested. Absolutely stunning. 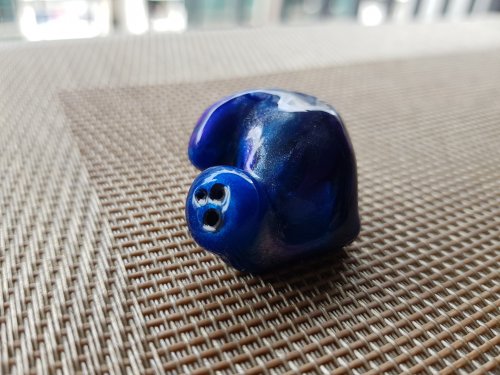 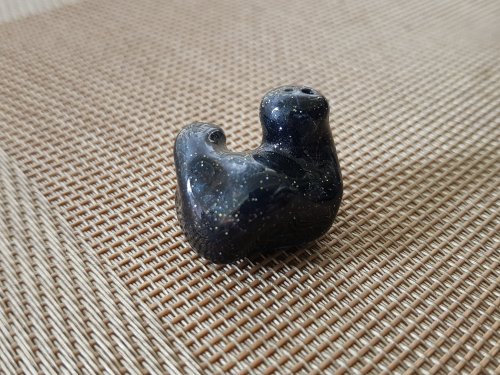 Bass
CE6's bass, in my honest own opinion, is some of the very best I've heard thus far in IEMs. Likely the best. The subbass is cleanly extended and boosted without any form of midbass bloat. Bass is on the quicker side of things but still retains great definition and slam for a satisfying experience. If you're a basshead I'd think you might want a little more midbass, but for my own preferences I do think its bass nails it. Compared to multi-BA sets like u12t that are touted with having the best bass, u12t almost sounds sluggish and almost bloated in comparison when it comes to the reproduction of bass. Positionally, CE6's bass is in line and does not overstep or overwhelm the midrange. No bleeding, just clean, well extended bass. I love hearing well recorded bass guitar basslines on the CE6. So tight and clean yet extended.

I do also have to mention that I legitimately prefer this presentation of bass over a dynamic driver's. Dynamic driver bass often sounds overwhelming, bloated or slow. Or maybe a combination of everything.

Midrange
The midrange is somewhat shaped similarly to the Harman target. If you're any familiar with the harman target, some users dislike the shrillness and/or shoutiness of the target. It's thin and leaner sounding which I would describe the CE6's lower and upper midrange as. Due to the aforementioned lack of midbass bloat, the sound takes on a presentation somewhat akin to Harman's. I personally have no problem with it but I can see why someone who's used to thick and heavy lowmid boosted signatures would dislike it. This uppermidrange boost makes brass instruments like trumpets and sax sound aggressive and textured. Outside of the potentially thin midrange, I don't have much to say about the midrange. I don't think its that divisive or offensive. It has good articulation and clarity without any form of suppression/haze/veil.

Treble
Now this should be the most controversial, love it or hate it aspect of the CE6. I do have to mention that it needs some getting used to. It is dipped at the 5-7k region which balances out with some warmth BUT it can rob some tracks of their harmonics. It is in no way muddy but when put next to IEMs with "full" treble harmonics (e.g DF and Harman targets), it can feel like a part of its treble response is audibly dipped. I guess there could be a case for such dips to reduce treble fatigue like with what qdc does on the 5-6khz range but I feel like the dip is of too much a degree here since the larger bandwidth (5-7khz) is dipped. As such the CE6's midrange also does take on a diffuse-y presentation (not to be confused with the Diffuse Field Curve) but rather the literal term of diffusion - being spread out which maay be contributed by this same dip. It has a big sound presentation (which I know some people are big fans of) but I'd like it more focused sounding with less diffusion. It one of my qualms with transducers like the HD800 too.

You might think the 5-7k dip leads to a forgiving sound but I will say this: the CE6 doesn't joke about a last octave (10-20khz) boost. The horn-loaded tweeter boosts the hell out of the region and it is especially unforgiving to poorly mixed and mastered tracks. It makes 64's tia and UE's truetone tweeters sound constrained and held back. It takes all the air, zing and shimmer and throws it at your face, it being at the forefront of the IEM's presentation. If you think u12t is u-shaped... ho ho ho this will show you what a real u-shape is. On Little Sims' Selfish, it pushes forward a recording mistake - Cleo Sol's microphone having some kind of ring/buzz. Try the track yourself - the ringing/buzz at 16khzs starts from 10s into the track. See if your own transducers can play it loudly. The CE6 definitely does. On NPR's live recording of Julien Baker (Julien Baker: NPR Music Tiny Desk Concert), try to see if your transducers pick up this ringing/sibilance whenever Julien vocalises. The CE6 picks up this noise artifact like it eats it for breakfast. These are some of the many examples that the CE6 can be incredibly unforgiving. On well mastered & mixed tracks however, this same ringing/noise/cracking/sibilance will not show. I don't know if this is a good or bad thing as an audiophile I am also looking for smooth replayability and rendition of music. I don't need to hear these recording artifacts that the engineer missed out.

Due to the 5-7k dip coupled with the big boost past 10khz, the treble response of the CE6 is uneven. There's much more shimmer and zing to cymbals than their fundemental frequencies. It leads to a highly energetic rendition of cymbals. It's hard to describe how it sounds until you hear it for yourself. I do also think age and hearing ability does play a large part here. If you're younger and more sensitive to ultra high frequencies I do think it the treble response of CE6 can also get too intense past 10khz sometimes.

Technical Ability
The imaging and spatial reproduction of the CE6 is really good. Transients are clean with zero bloatedness and L/R imaging has laser-like precision. Perhaps this laser-like precision is also due to the presence of the ultra frequency boost - the brain needs to compensate less for sound localisation. Layers and separates instruments/voices great. Nothing much to say other than a great job here other than that I would prefer a less diffuse presentation. I do really think the CE6 images better than most stuff out there, and comfortably sits on TOTL levels of imaging and resolution.

Dynamism & Engagement
Usually I don't comment much with regards to dynamics but I do think the CE6 does a pretty exceptional job here which I do need to point out and commend. Loud parts of the song pop out while soft parts stay in the background. IEMs do feel held back when compared to speakers with regards to dynamics but I think CE6 fares very very well. It grabs hold of my attention with great handling of dynamics and has an aggressive presentation that can keep me on the edge of my seat at times. It can be really surprising how it presents sound to me in a way I've never heard before with both IEMs and speakers.

Comparison against the Universal variant
I also got to try the Universal form of the CE6 and was pretty surprised how different the treble response was compared to the custom. The universal is unfortunately much peakier with the midtreble and its peak is very much audible when compared to the custom. I do think further adjustments and refinements to the universal form has to be done to emulate the custom sound better. The universal's treble sounds colder and much peakier.

Conclusion
I've really grown to enjoy the CE6 and have heard all its strengths and weaknesses in the month I've had them. They make for an aggressive listen with amazing bass

toranku
@max1236 Totally get what you mean. I used to hear u12t as rather sharp and overly sizzly on the top end, but perhaps its either my tolerance increased or my brain has burned in with such treble response. I like tia and truetone tweeters now, but the CE6 does crank it up even higher in terms of that upper end sizzle.

dhruvmeena96
As per graph, this iem is purely made for resolution and mastering purpose. Where the mixing engineer can properly hide noise, pops etc while mixing and mastering song.
Read more…