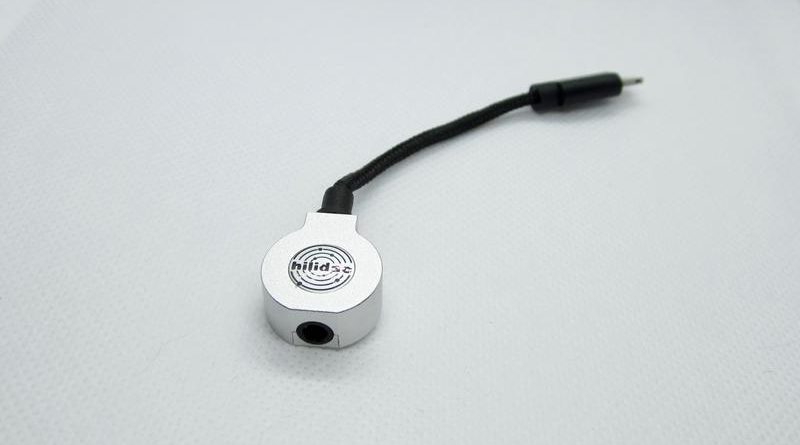 So-So Chifi warm sounding DAC
Pros: + ergonomics
+ warm sound
+ not very power hungry
+ clean sound
+ great for iems
Cons: - not a lot of power
- pricey for what it is
- not high volumes even for iems
- many competitors at this price point
I mainly made a video review, which I invite you to watch.

The DAC is ok, but not great, a bit pricey, and doesn't make much sense to get unless you really want a warmer / thicker sounding DAC

Great for music and if you have bright / brittle sounding IEMs

More in the video!

Otto Motor
I tested the power consumption it it was very power hungry with my iPhone...63% of charge left after 3 hrs of continuous play...75% with Audioquest Dragonfly...and over 90% with the Apple dongle. Other than that, I did not see much of a difference between the $10 Apple dongle and the $70 Atom Pro.

Dobrescu George
@Otto Motor - I do not have the apple dongle, but i agree that it is not necessarily a great deal. MQA would matter more if it had more resolution I think

The Audirect Hilidac Atom Pro (iPhone lightning version) offers subtle sonic differences to the Apple lightning audio adapter [review here] but adds essentially no additional power to drive higher-impedance headphones – and it is a notorious battery drain. It is a redundant, overpriced product unless you rely on MQA.

UPDATE: It was brought to my attention following this review that the Hilidac Atom Pro is the cheapest dongle with MQA functionality. When you look at it from this angle, you may find it a good deal. I personally do not subscribe to Tidal.

Audirect are a company out of China that specialize in portable decoding devices. Their latest model, the Hilidac Atom Pro comes in two flavours (and a range of colours): with a USB-C connector (for use with Android phones and computers) and with a lightning (for the iPhone family). HifiGo sent me the iPhone version, which begs the question how it holds up against Apple’s own audio adapter. I recently reviewed the $10 Apple “lighting to 3.5 mm headphone jack adapter” – which features a microscopic stereo digital-to-analog converter (DAC), a stereo headphone amplifier, a microphone preamplifier, and monophonic analog-to-digital converter (ADC) – and power converters to run this all. In my review, I cited the informed opinions of other reviewers. It has been well established that the Apple audio adapter is the gold standard for the iPhone for loads up to 50 Ω. It is hard to beat, sound wise, but has power limitations with higher-impedance headphones such as the 300 Ω Sennheiser HD600.

Audioquest was the first company to offer a series of dongle amp/dacs as alternative to the Apple audio adapter. My $99 Dragonfly Black v.1.5 adds a lot of power to the iPhone – good for driving higher-impedance headphones – but apparently does not add to the sound quality as reported here.

In this review, I will test whether the Hilidac Atom Pro beats the Apple adapter in both sound quality and amplification. Could higher-impedance headphones be driven easily with the Atom Pro? Is it worth spending more than 7 times the price on this dac/amp compared to the Apple adapter?

I usually do not reflect on packaging but in this case I have to: the box only contains the dongle and a thin manual but is so big that it could easily hold 50-100 of these Atom Pros. Considering the product is shipped from Asia around the world, this is a waste in terms of both environment and postage.

The packaging clearly mimics Apple products. The dongle is pretty small however much longer/bigger than the Apple adapter. The chord is woven textile. The housing has a somewhat crude powder coating and the detail on the seams is soso. The build is far behind any sleek iPhone. Shape-wise, the housing is also a bit plump compared to Apple designs. The Hilidac looks cheap next to an iPhone…but it is not, price wise. 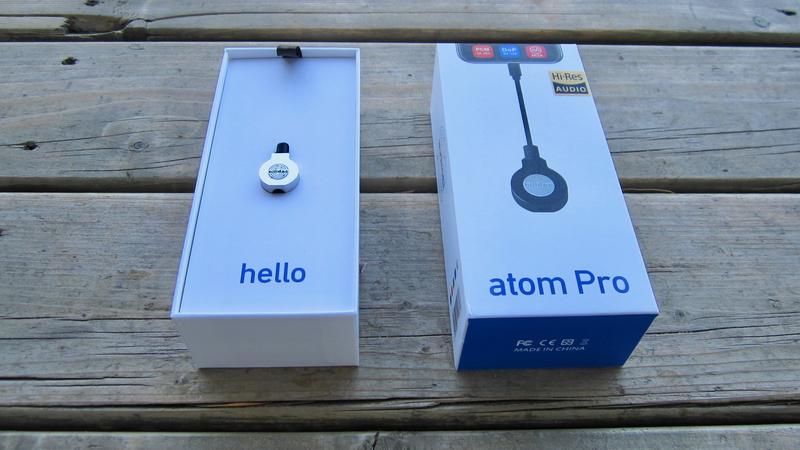 The Atom Pro does not contain a battery – it draws energy from the iPhone. Operation is easy: it is plugged into the iPhone’s lightning port and boots up automatically. During the boot process, the LED changes quickly colour from blue through green to stay red for the entire time of operation up to 48 kHz signal processing. The LED changes to blue above 48 kHz, and allegedly to magenta when playing MQA (which I did not do as I do not have a TIDAL subscription). Like most dongles, one has to disconnect and reconnect the Atom Pro when changing the headphone. The volume is entirely controlled on the iPhone. Like all the other 3-rd party dongles I have tested, the Atom Pro sacrifices the phone capability with my iPhone SE. 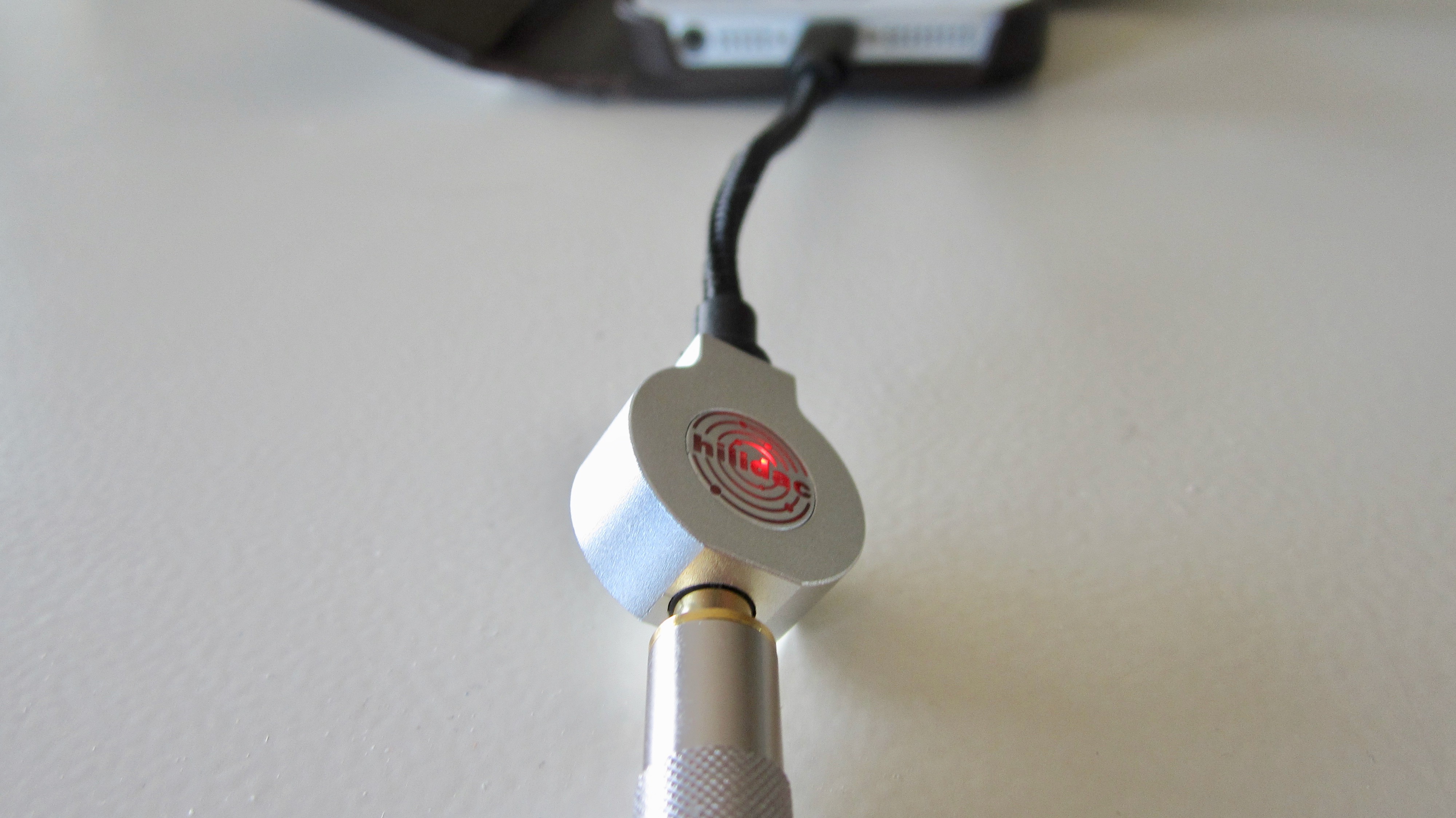 Since the published power specs between dongles are hard to compare, I tested the relative power of the three dongles at a load of 32 Ω (the Blon BL-03 earphone; 32 Ω are earphone standard). I played a white-noise sound file and turned the phone’s volume slider up to measure 85 dB (C) with a Dayton microphone and the SPL (sound pressure meter) of the REW software.

Volume slider of the iPhone SE needed for 85 dB output with different dongles.

I let the fully charged iPhone SE (2016 model) (screen off, only “Music” app running…identical condition for each dongle) play a song in a three hour loop at the same audio volume (calibrated with white noise at 85 dB through a Dayton microphone) with the Hilidac Atom Pro, Apple audio adapter, Tempotec Sonata Pro HD, and the Audioquest Dragonfly, attached again to the Blon BL-03 earphone at 32 Ω. I ran some of the tests twice. The remaining charge in the iPhone after three hours was:

This means that the Hilidac Atom Pro consumed more than five times as much battery as the Apple Audio Adapter at the same output volume. I would like to note, that the absolute numbers listed above are meaningless, what alone counts is the differences between the dongles.

My tonal preference and testing practice

The Hilidac Atom Pro adds a tad of warmth to the low end of the frequency spectrum and clips the spikes out of the upper end compared to the Apple lightning audio adapter. This thickens the midrange a bit but that also removes sparkle and transparency. Which signature is the better one remains in the eye of the beholder. In the end it doesn’t really matter as they are very subtle (in contrast to the price difference)…and they certainly do not matter at all on the daily commute. The Dragonfly has a much stronger amplification than the Atom Pro, which allows for driving less sensitive earphones and headphones better, but it also adds some bass to the mix so that the recession of the midrange in U-shape earphone is exacerbated. The $45 Tempotec Sonata HD PRO (review forthcoming) sounds very similar to the Atom Pro.

It appears that Apple has put the bar very high with its $10 lightning audio adapter as it provides stellar audio quality at minimal battery consumption. The only reason for purchasing another dongle dac/amp for iPhone is to drive higher-impedance/lower sensitivity headphones above 50 Ω/below 100 dB or to decode MQA files. The Hilidac Atom Pro does not offer significant additional amplification over the Apple lightning audio adapter, it is also sonically not above it and only excels as battery drain. The better option would be the cheaper and more versatile Tempotec Sonata HD PRO, which also sounds good/is built well, and it comes with all adapters to connect to iPhone, USB-C, and USB-A.

Considering the Hilidac Atom Pro is 7 times the price of the Apple lightning audio adapter and that Apple gear is typically vastly overpriced, and also taking into account that you get the good sounding JWD JWM-115 DSD Lossless Portable Music Player at the same $69.99, I wonder how anyone could justify buying the Hilidac Atom Pro for iPhone. It is a good sounding but nevertheless largely redundant and overpriced product – unless you rely on MQA.

Until next time…keep on listening.

The Audirect Hilidac Pro was provided unsolicited by HifiGo for my thorough analysis. I am sorry for the result (I am equally disappointed), but in the end I have to be honest in my reporting.

You find an INDEX of our most relevant technical articles HERE.
Last edited: May 26, 2020
Reactions: Dobrescu George, antenorhs, XERO1 and 1 other person
Read more…

I disagree. I have every dragonfly and the Sonora pro hd. I really love this dongle. I liked the fiio l1 but this is better and offers a sabre dac. However I have to say I only listen to iems now. For iems it’s ultra convenient and offers a great sound improvement over the iPhone’s dac
@davescleveland: what is needed is more reviews. A single swallow does not make a summer. Strangely, nobody takes on this one.
Tempotec Sonata HD PRO: @$45, you can connect to any device...all cables and adapters are in the box.
Hilidac (lightning version, as reviewed) : @$70, you can only connect to an iPhone.

The Sonata is also built much better and consumes substantially less phone battery. The textile cable and crude powder coating of the Hilidac is pretty poor.

I don't see anything in favour of the Hilidac in this tight dongle market.
You can’t use the sonata on the iPhone unless it’s plugged in to power. I like the sonata but it is a pain because of that. Dragonflies are all good for iPhone and So is the hilidac
I don't know which Sonata HD Pro you are referring to. Mine works with the iphone.
https://www.audioreviews.org/jvc-ha-fdx1-pairings/
Yes it works but draws too much power. iPhone has to be charging
Worked fine for me. See the battery drain test above.
Hi! I have a hilidac Atom too, but mine is USB type C, and I use it in my galaxy S10+ and PC, and I didn't noticed any above average battery drain, or something like this. For me, The only issue using this on Andriod, is that you have to buy thrit party software to use MQA. I spend extra buck buying the USB audio player pro, and the MQA pluggin... This is kind of annoying, because you can't just open the original Tidal App and listen to music... You have to open another app, with a poor Tidal interface, and use it... I don't know if there is a way to unfold MQA directly from TIdal app using this DAC on Android phones, but the hilidac support gave me only this solution.