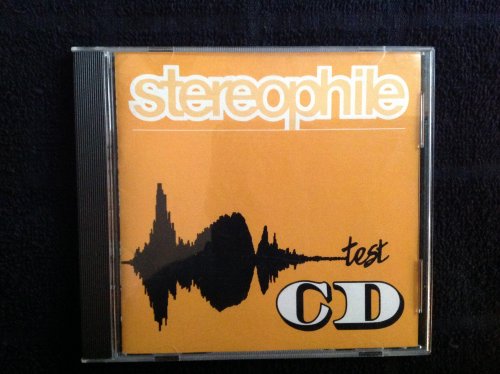 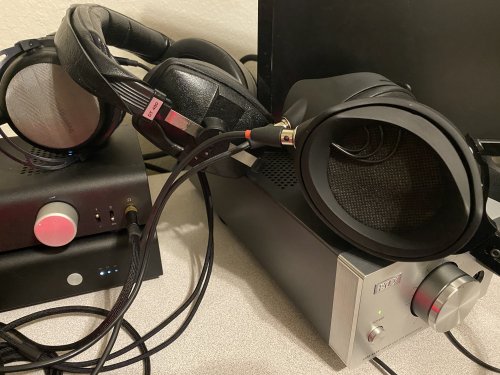 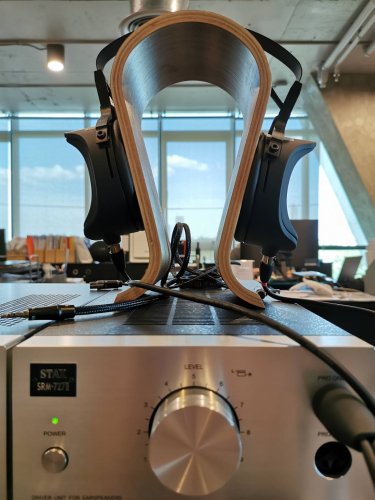 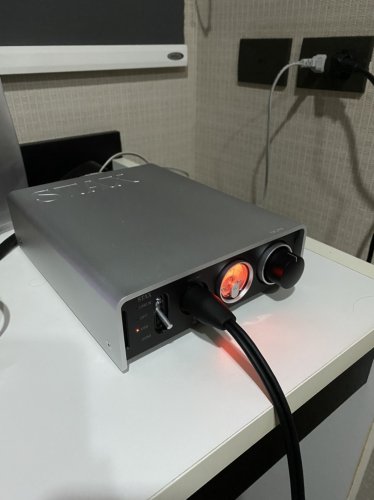 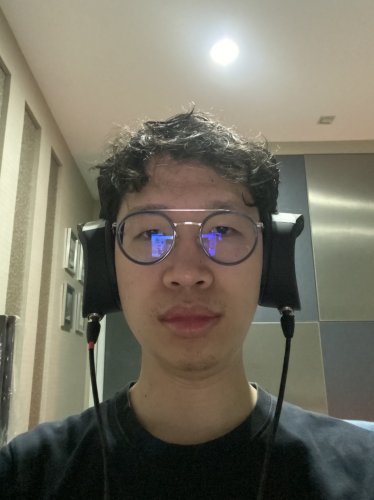 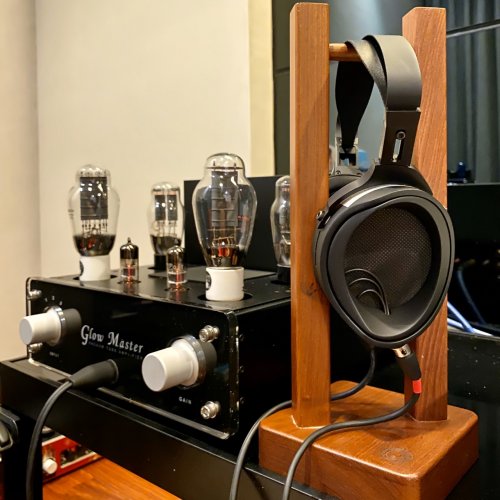 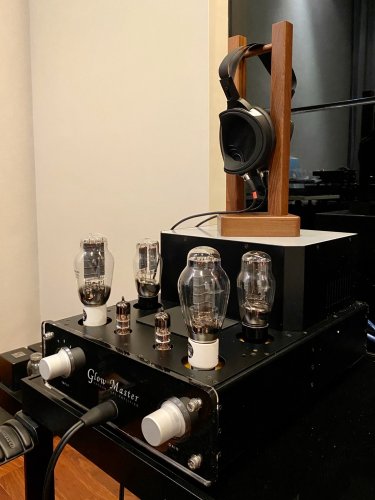 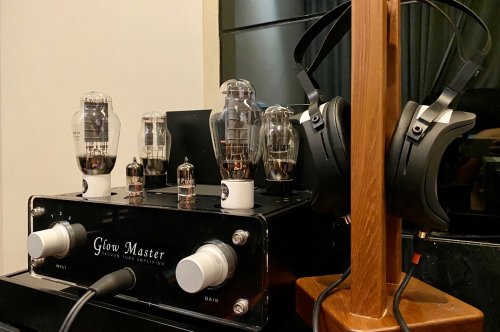 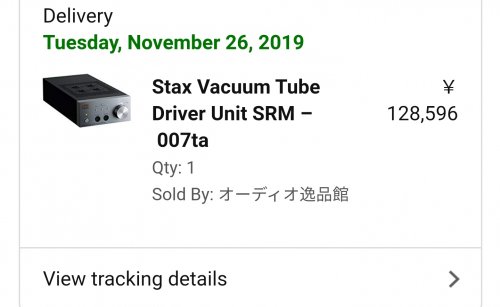 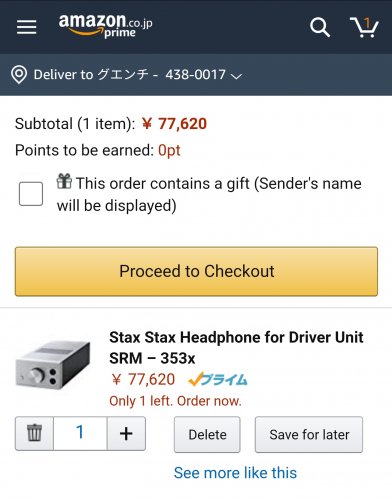 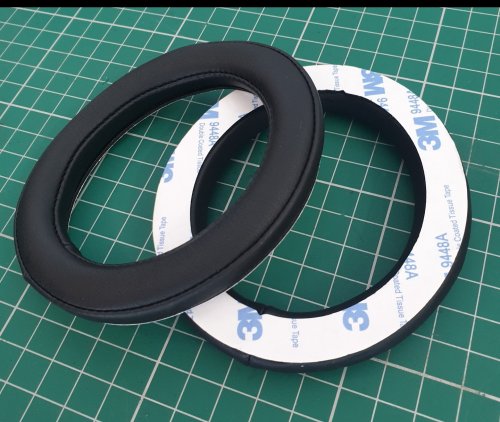 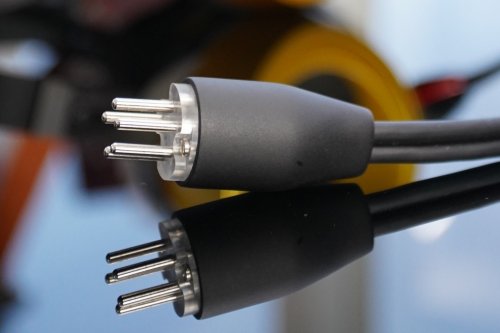 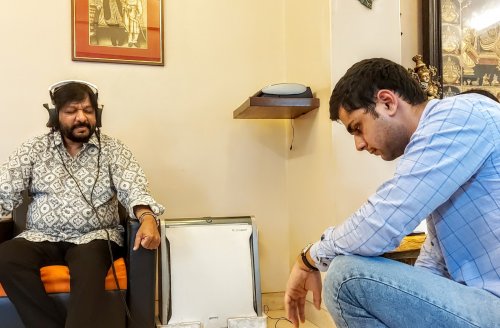 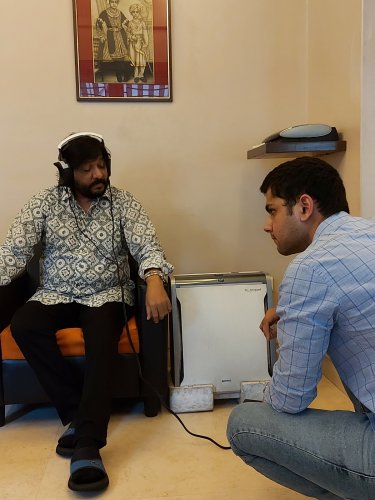 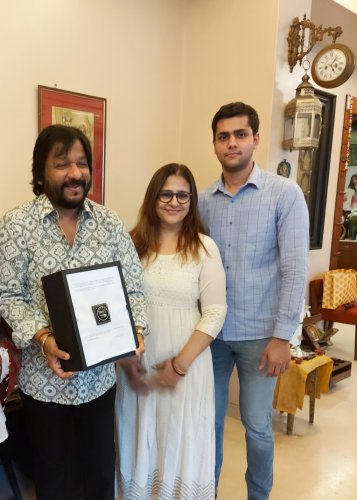 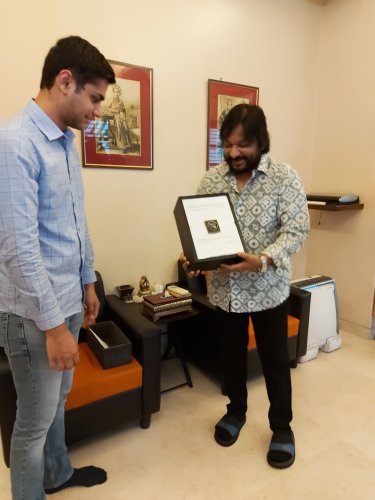 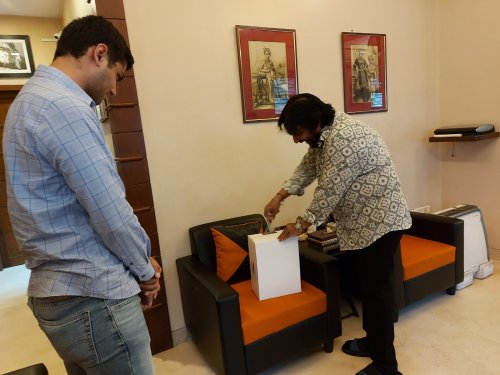 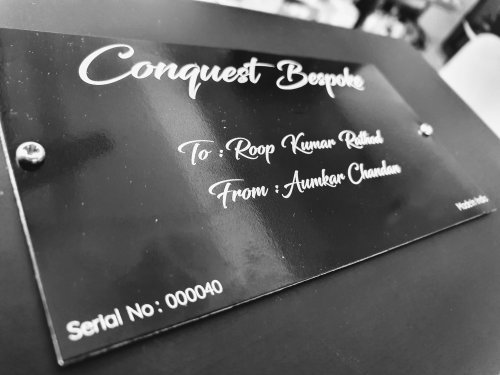 Just got my hands on these.

initial impression: they sounded really good for the price. I have to agree with some others’ comment about the sound being almost like a planar but with estats highs.

Decent bass reproduction (in estats world, they r great). As detailed as Stax L300 but with slightly less treble quantity. So, they dont sound as airy or has that ethereal feel to the sound as the stax lambdas, but at the same time they r slightly more forgiving for modern/pop song genres.

build quality is miles better than Stax L300 thats for sure. Earpads r on the thinner side (my ears slightly touching the internal wall, but not as thin as L300), but they r still comfortable and not annoying unlike the L300.

again, these r my first impressions (gave it a 3 hours listen). But yea, for usd500, if you r looking for budget estats, u cant go wrong with these. Definitely the best USD500 headphone right now. Possibly under USD1000 too.

ponyhead said:
How ethereal are these? How does the timbre compare to a dynamic such as the hd650?
Click to expand...

gken92 said:
Nothing can produce timbre as good as Hd650 unfortunately. Not even sennheiser’s own dynamic flagships
Click to expand...

If you use hd800s on Sonarwork app...
Like this

Second day with the RR1. I feel that I can post some first impressions. This is my first set of electrostatic headphones, so take this with that in mind. My only experience with them otherwise was at a Denver meet some years ago, I think headamp was there with a BHSE, a set of SR-007 and a newly released SR-009. I listened to them both, they were fine and good, sounded as good as anything I had heard, but out of my league. Spending thousands on a headphone system, wasn't in sight. Anyway, these impression might be more of electrostatic headphones than the RR1 electrostatic headphones, as my experience with them was previously virtually nonexistent. But I think they could useful for someone who is only familiar with dynamics/planars. Not to mention you know, new gear, excited about it. I also wonder if things were flipped, and I had lived my life with a RR1 and you gave me a HD-650 if I would be writing the same thing, anyway..

They sound really good. Presentation of material is more complete than I've heard before, and not in a minor way. Details are there, they're not straining to be there, they're just there. Listening to rock music one can more easily hear when others join in with the lead singer, and really hear the tone and thump of the bass drum as it's struck. Same with any instruments, really it just goes to hearings things in a more complete way. I am very much aware that this effect exists with all new headphones, high end dynamics, etc. But I would say that while in the case of having a set of dynamics and getting another, you feel you are hearing things new when it is actually you are just hearing things differently, and maybe more things (simply because you are paying better attention to music with the new toy). But essentially it's not necessarily that one is marginally better, they're just different. I will say with the RR1 that effect, of hearing new things, different, more complete, is the strongest I've experienced. Only listening over an extended period, and eventually going back to dynamics, will tell.

I also dig the build. They are unique in that they are designed for use by a single person. Once you find the right for your head, you tighten it down with an allen wrench. To adjust, you have to loose and re-tighten. The same with the cup positions, which I was surprised by initially but now am not opposed. I remember seeing a set on the FS forums where the tape covering the cups was left on. The gimbal mechanism is machined aluminum, and when loose it does sit close to cups and will touch the cups if moved in towards them. But once you adjust to your heard, and tighten down, they sit at a good distance from the cup. Though to be honest I haven't removed my tape either. I think best practice would probably be to insert the thin strips of foam that came with headphone, should you need to adjust. Make the adjustment with the foam on, tighten, remove the foam. Anyway, I'm planning on taking out the tape. These don't have the same super polished feel of some the TOTL cans, but they have their own charm to them that is quite original.

Comfort is good. I'm going to try to swap in the larger headband later I think. They do squeeze your head a bit, might try to bend headband if the larger pad doesn't do it. They're not heavy, which is important.

I dont like the yoke due to its lack of flexible.
If hd800/s is given 10points for comfortable, RR1 will be 7.

I am two days into enjoying my new to me RR1. I am very impressed with the build quality and the sonic character of these headphones. Teamed up with a 252s and a tube pre amp they are very special.

re: Re1 fitment and comfort. I was very concerned about this from reading other posts and conversing with an RR1 owner. I wear an XL motorcycle helmet, so I thought that this might be a problem for me.

They seemed tight at first, but the excellent design for the cup height and angle, it was easy to get the cups where I wanted them. Then it was about getting the clamp pressure right. The steel used in the head band is the best in strength and flexibility that I have seen from any brand.

I am still fine tuning mine. Do not bend the head band by holding the cups! Hold it in both hands a few inches up from each cup and lightly bend in the direction that you want to relieve pressure from. Do it in baby steps on both sides until you get your perfect fit.

Zach at ZMF has a very good video on the subject. Maybe a specific video from Kaldas on the RR1 head band adjustment could help.

The RR1 continues to impress. Plenty of detail and very real real bass.

If you are on the fence about ordering an RR1 but the lack of an energizer is holding you up, I have an affordable Stax SRM 252s that I would part with. It pushes the RR1 with room to spare. It is a U.S. voltage version that does not require a step down transformer.

Got in the replacement RR1 cups/drivers with 3mm spacers adhered to the pads. I went ahead and blu-tacked on the spacers/pads to the cups. Comfort is a little better, but still not as good as my STAX L300 Limiteds with L700 pads and arc assembly. Left ear still touches the driver screen fabric, but less noticeable than without the spacers - but still noticeable. No squeal with the new drivers though, working as they should! Sound does seem a little different with the 3mm spacers, little more expansive sounding along with a tad more treble emphasis. Will say that I do like the sound with 3mm spacers more than stock.

Just wish it had the yellow wire insulation I had requested, and was promised since my custom gunmetal-graphite painted/yellow wired bespoke RR1s had squealing issues. I can live with all black, but was pretty bummed when unwrapped them and there was no yellow insulated wires on them.

Pro-tip: cut a 6 1/4" length of 3/8" dowel rod and bevel the ends to make a stay that goes in the headstrap adjustment slot area to keep the end of the pads/cups from smashing against each other...

Got my RR 1 all ready to go, really enjoying what I’m hearing so far. It’s my first e-stat so will take some getting used to. Definitely already in my top two headphones sound wise but have to get a handle on them, will post initial impressions in a couple days. Comfort is good, a bit of pressing against my ears and notice it more after a couple hours but no discomfort or irritation. Picture of the RR 1 with my two favorite dynamic headphones. 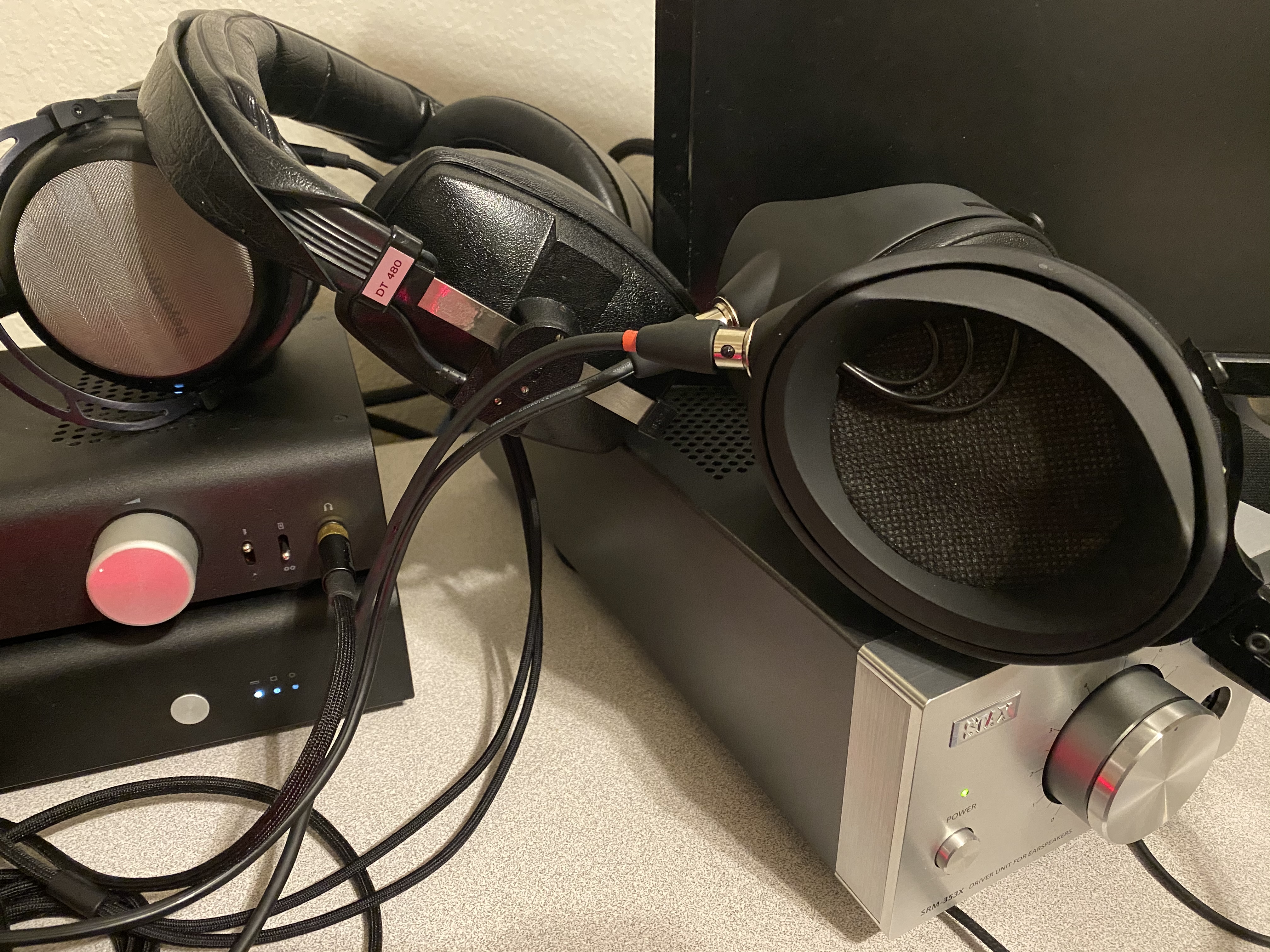 Curious as to people's thoughts on how long these take to warm up at each listening session. What's bugging me is the right channel takes a considerable amount of time to reach the same output level as the left channel. So I have to turn my system on and play music for a good half hour before I can put the headphones on. Otherwise one channel is noticeably quieter than the other, they seem to be playing at similar levels after this warm up period though.
My old feedback thread
Share This Post
Reactions: nepherte
You must log in or register to reply here.
Share:
Facebook Twitter Reddit Pinterest Tumblr WhatsApp Email Link