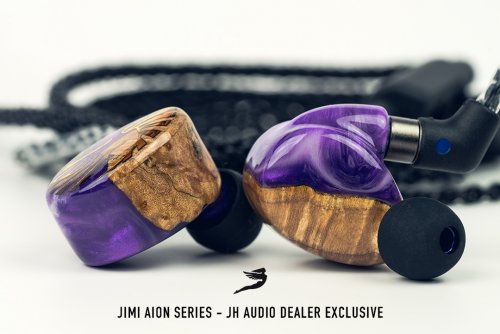 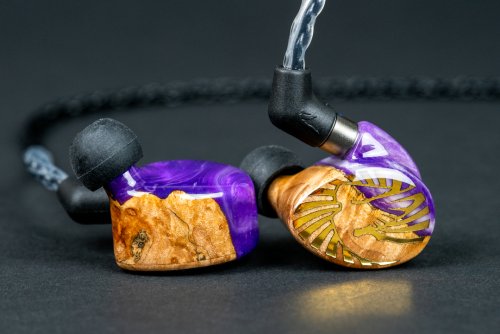 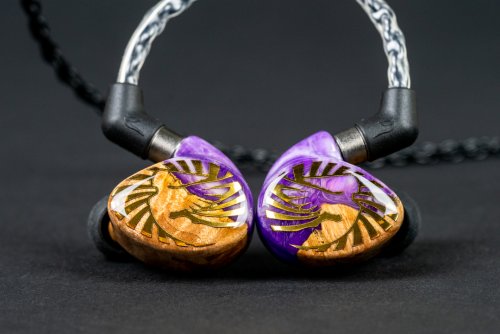 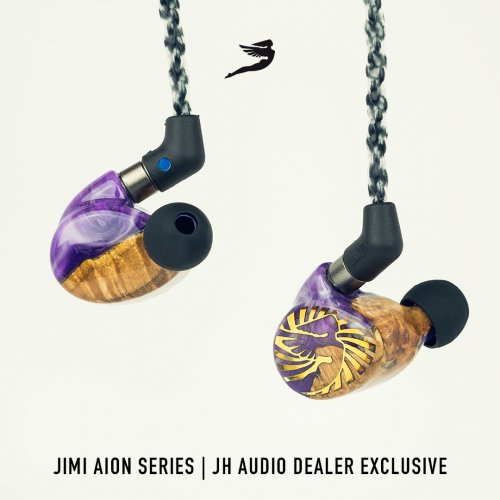 You are using an out of date browser. It may not display this or other websites correctly.
You should upgrade or use an alternative browser.
Jerry Harvey Jimi AION - Limited Edition Universal IEM (Pre-Order now)

Jerry Harvey Audio is releasing a universal fit version of their JIMI custom IEM, limited to 200pcs, and offering it exclusively through its dealers such as HeadAmp. The shells are are also smaller than JH's previous generation of universal fit earphones!

Jimi AION is JH Audio’s newest addition to the AION Series with their Sonic Tube Chassis that was last featured on the Layla AION and Roxanne AION products released last year in 2019.

This is JH Audio’s FIRST EVER Universal IEM in their newest featured and upgraded Signature Design as well as the smallest profile shell they currently offer! They will be numbered and include a Metal Limited Edition card engraved with the number of the IEM. 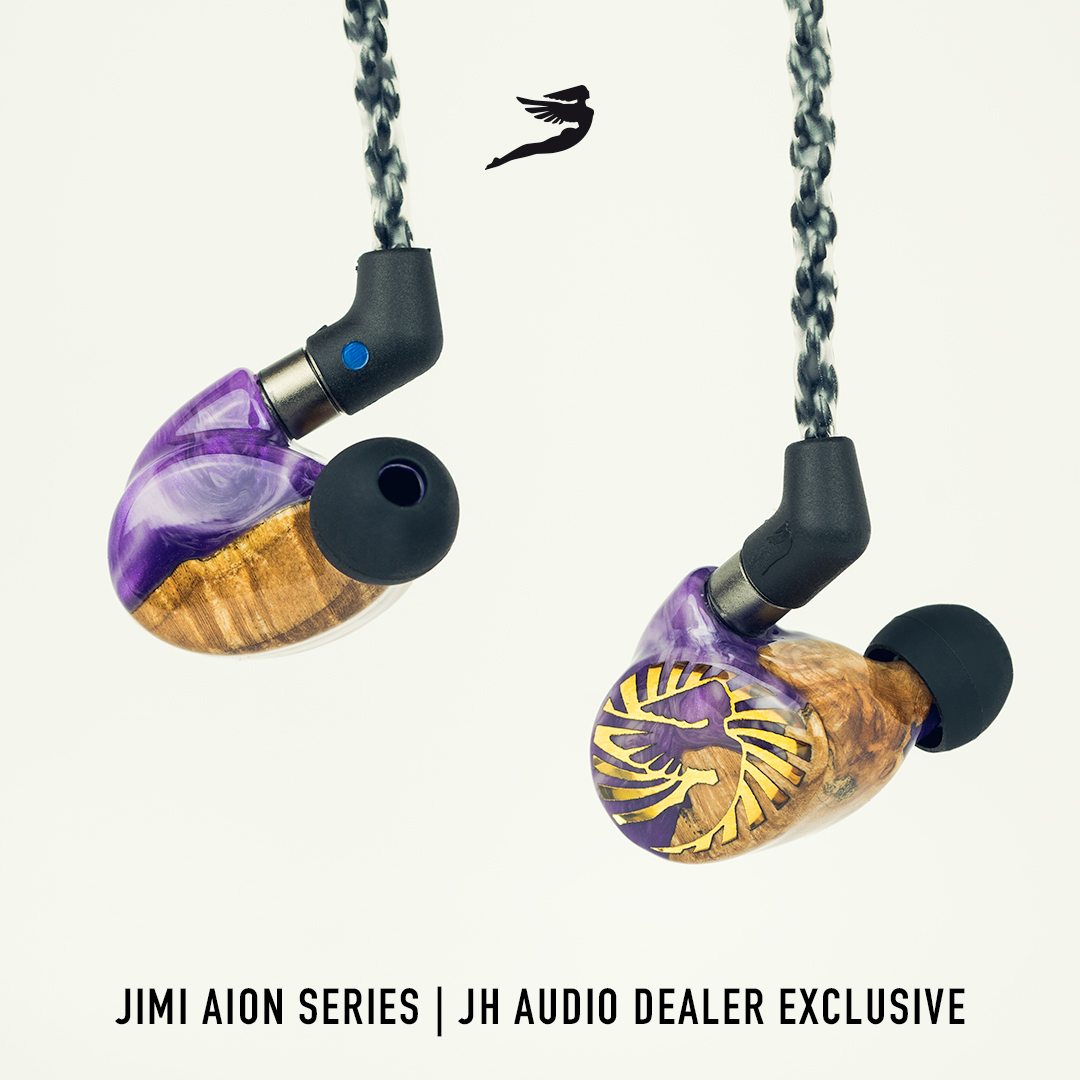 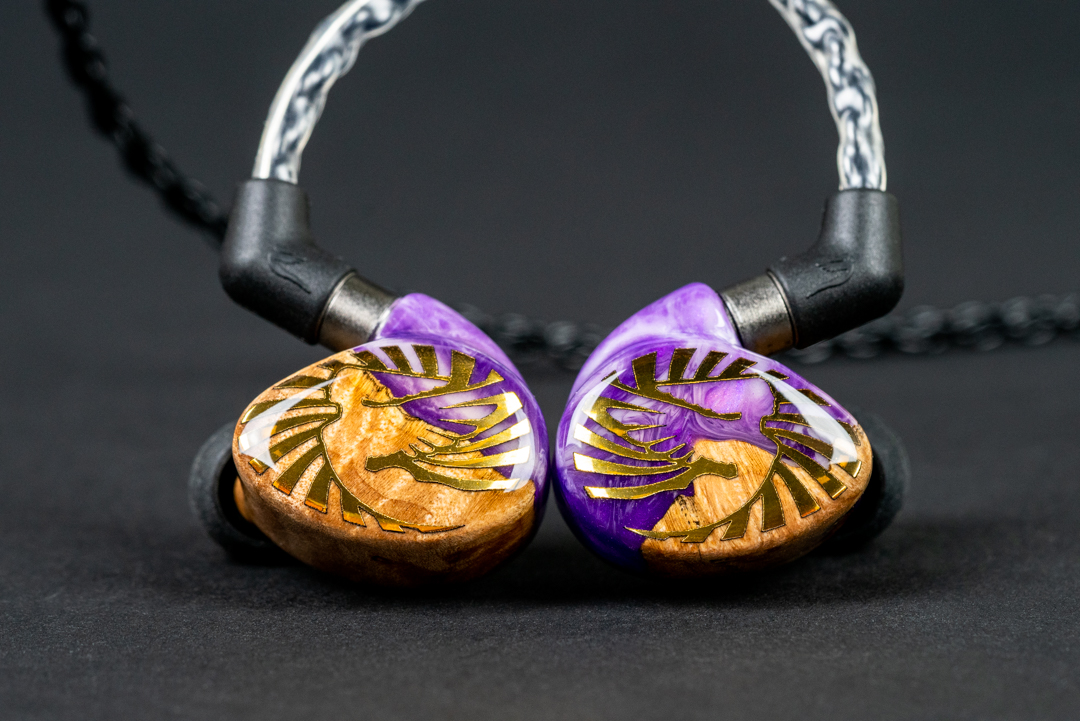 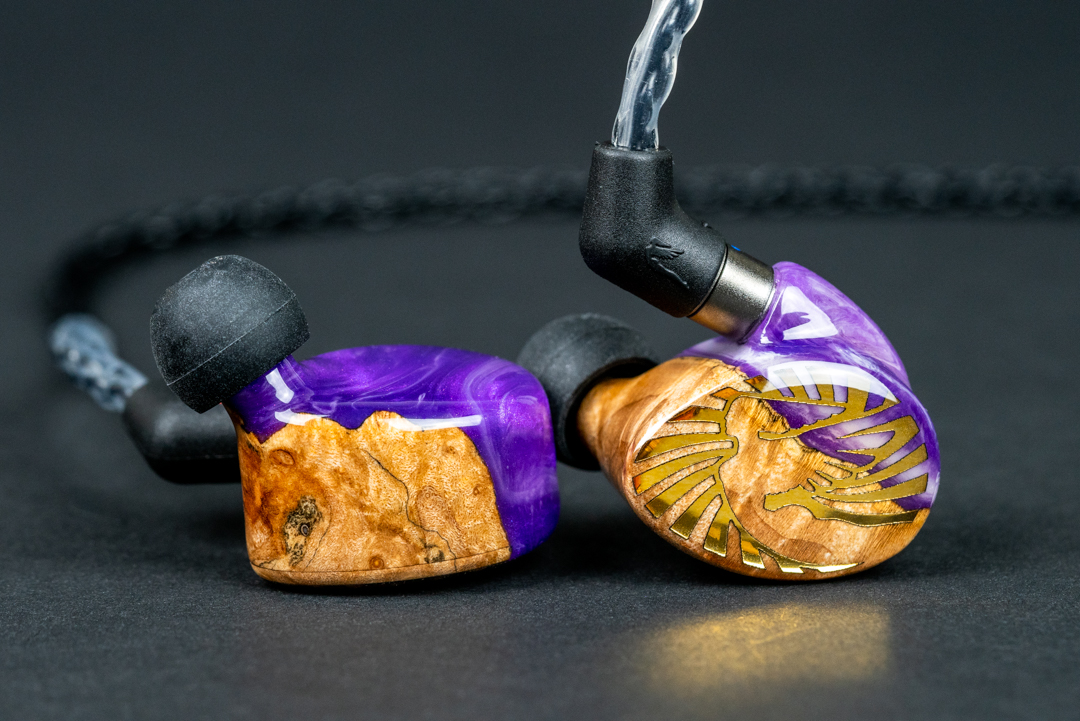 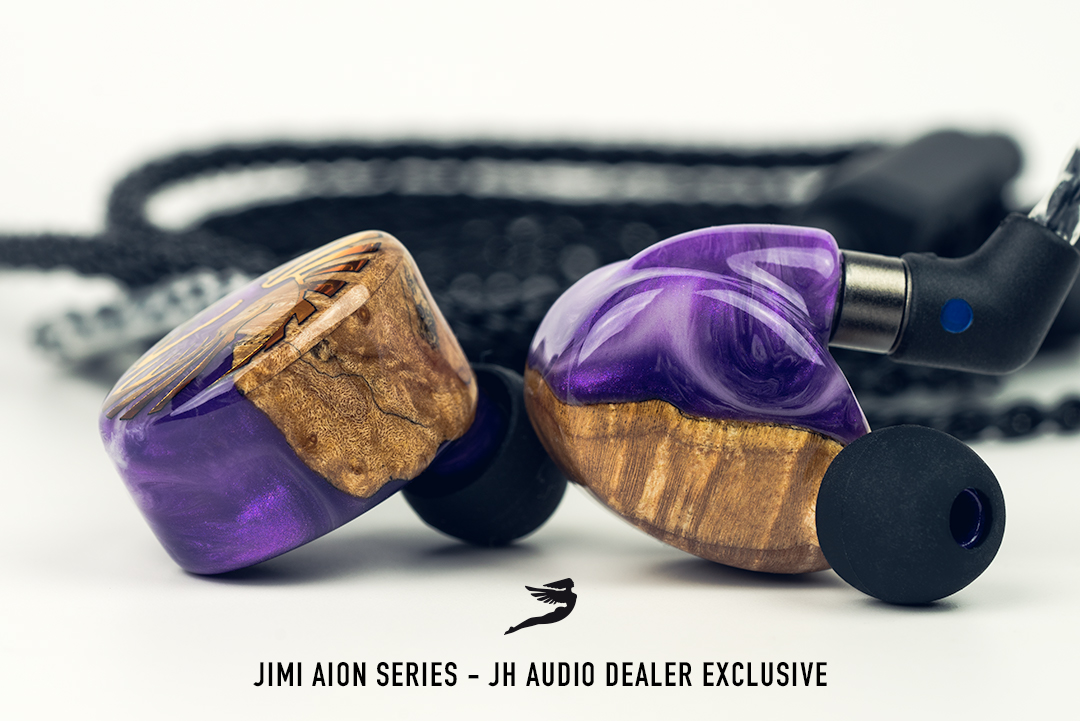 John Massaria said:
beautiful! with seven drivers I wonder how timing is- I can't stand iems with terrible synergy between frequency drivers
Click to expand...

JH introduced FreqPhase back in 2012 with the updated JH13 and JH16. Read about it here: https://www.innerfidelity.com/conte...-transparent-freqphase-jh13-and-jh16-jh-audio

and a video:
HeadAmp - www.headamp.com

justin w. said:
JH introduced FreqPhase back in 2012 with the updated JH13 and JH16. Read about it here: https://www.innerfidelity.com/conte...-transparent-freqphase-jh13-and-jh16-jh-audio

I have the Jimi in custom (I also have 4 other JH Audio IEMs, as I really I dig their sound sig).

The Jimi has a very nice sound, very warm mids, tight and deep bass, and the top end lacks shrill-ness or sibilance (which I thoroughly hate). The Jimi is my go-to IEM right now, especially if like me you listen to vibrant music (house, deep house, nu disco, pop etc).They can be worn for hours without fatigue. If you mainly listen to acoustic and vocals, the JH 16 Pros or JH Lola would be a better fit. For pretty much anything else the Jimi's sound great.

Update! JH tells us they are getting our allotment of Jimi AION finished & packed and on the way to us
HeadAmp - www.headamp.com

The JIMI AION is now in stock and ready to ship at HeadAmp!

We have 2 pairs of demo JIMI Aion that we can send around. These are in black shells not the purple haze signature design, but the internals are the same. Existing and recent HeadAmp customers can sign up first if they want to try one of these out -- just post here.
HeadAmp - www.headamp.com
D

Greetings Head-Fi’ers! As there are few comments here or elsewhere regarding JH Audio JIMI AION earphones (likely due to their limited production run), I feel obligated to post my initial impressions.

My main gear over the past seven years has been Shure SE846 run through AK240, with custom cables from hybridaudio.ru. I’ve been more than satisfied, but at some point felt the need to shake things up and try a different pair of earphones.

Well, as fate would have it, that time has arrived. After being accosted by a mentally disturbed SOB in the Moscow metro, my right earphone was lost and my high-end cable was damaged. I felt the best way to ease my shock from this crazy incident was to immediately start looking for a replacement.

I’ve had my eye on various JH Audio earphones for a while now, but was somewhat put off by the cost and had no urgent need to upgrade. Fortunately, as cost is no longer a major concern, and I needed new IEMs ASAP, I began looking around on doctorhead.ru. As they are an authorized JH Audio dealer, I was pleasantly surprised to see that they had the JIMI AION model in stock in their Moscow store, listed at $1,400. Although this is certainly pricey, they do come with a supple and high-quality Litz cable with a 7-pin connector to match the seven internal drivers (dual low, single mid, quad high).

The choice of seven drivers in this model was interesting and got me thinking. Having now listened to the JIMI’s, it seems that more drivers does not necessarily equal “better” sound. Granted, if you seek to wring out every last detail from the music, more drivers (and a neutral high-end DAP/cable) might be the way to go. But having been there/done that, I’m looking for something a bit different at this point. And perhaps in the mood to take a gamble.

What initially drew me to the JIMI’s as opposed to the Lola’s available at doctorhead.ru was the gorgeous color/design of the shell. It is striking and unique (which they actually are, as JH Audio produced only 200 pairs). So there is certainly a pleasing aesthetic/exclusivity factor.

After listening to a quite impressive but otherwise neutral presentation through my SE846’s for so many years, the promise of a warmer and more colorful analog sound (according to Jerry Harvey himself – “funky, smooth, yet electric”) was intriguing. I was also drawn to the promise of boosted mid-to-low frequencies to give the bass and drums an extra punch (I listen to quite a lot of classic rock/metal).

This may be anathema to some, but I went ahead and ordered the JIMI’s without testing them for sound or fit. However, as the JIMI’s are advertised as having the smallest shell of any AION universal model, and they come with plenty of tips to ensure just the right fit and seal, I wasn’t too worried.

I read somewhere how the nozzle was a bit too wide for comfort, but in my case the JIMI’s fit like a dream. They slipped right into my ears with no need to change the tip. The fit and seal were perfect, as if I had ordered customized impressions with a re-shell. Already off to a great start!

As for the sound, one thing I’ve missed in my years of listening through IEMs is the feeling of being in a room with great acoustics and listening in front of a pair of excellent speakers or in surround sound. The JIMI’s ‘acoustic sound chamber’ may have something to do with this, as it seems to allow the signal to pass through some ‘air’ within the chassis and smoothen the timbre of the signal (forgive me for my less than technical description).

You can palpably feel the thump and echo of the drums against the walls of your virtual headroom. The sound is weighty and punchy, and the bass lines growl underneath with outstanding definition. Against this sonic background, the tone of the guitars really stands out as well. Remarkably for such a prominent low and mid-end, the high end does not seem to suffer much, if at all.

The feeling is decidedly analog and darker-hued, perhaps how rock musicians from 70s and 80s might have heard their own recordings in the studio. As several have noted, the JIMI soundstage is indeed unified, which, at the arguable cost of some sonic separation, allows you to listen from a different vantage point. As someone put it, it’s like standing in front of a band performing live in the studio as opposed to listening from the mixing board. It’s a much more physical and head-on experience as opposed to an analytical, cerebral presentation. The bass and drums are right in your face, and the guitar tone simply shines. For example, it was jaw-dropping to listen to Randy Rhoads’ playing on Blizzard of Ozz. And of course I had to listen to some Hendrix – not sure if I’ve ever heard 1983 from Electric Ladyland quite that way before!

As someone put it, JIMI’s make you want to listen to your entire music collection again to hear what you’ve been missing. I know that sounds cliché, but given my initial impressions from these earphones, I can’t disagree.

To sum up, if you’ve 1) got the cash, 2) are looking for a change of pace from your standard/neutral high-end earphones, and 3) your tastes lean toward classic rock/metal, the JIMI AION is absolutely worth your consideration.
You must log in or register to reply here.