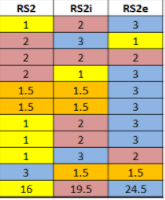 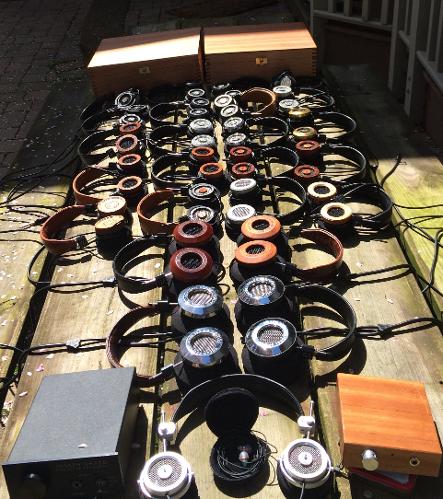 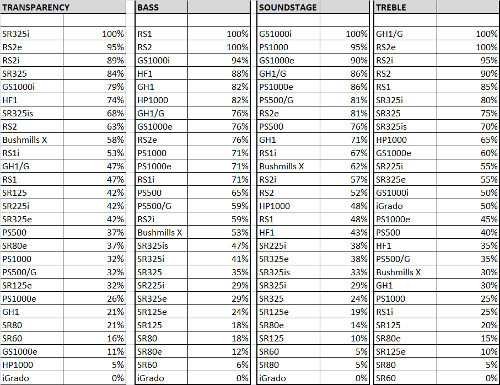 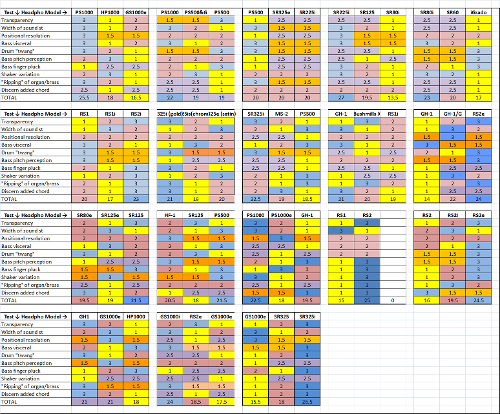 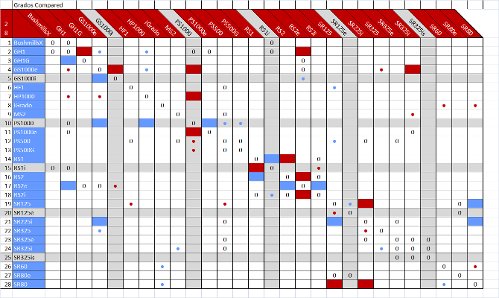 You are using an out of date browser. It may not display this or other websites correctly.
You should upgrade or use an alternative browser.
Huge Comparison of [Almost] All Grado Headphones -- Post Your Own Comparisons Here (thanks, @giogio!)

This thread collects comparisons of one model of Grado headphone to another, beginning with comparisons of my 26-Grado collection and inviting others to contribute their comparisons.  It differs from other Grado threads by comparing multiple Grado models to each other.

This thread is inspired by this thread from head-fier @giogio, who has started a thread of a similar title for comparing (nearly) all Bluetooth headphones.  That thread has become one of the handful of select resources that folks trying to determine which pair of BT headphones to buy.  This thread strives to provide a similar service for persons standing agape at the foot of the mountain of models of Grado headphones, wondering which to buy.

As far as I know, I have the largest collection of Grado headphones in private captivity.  In addition to the joy that it gives me, it also gives me both an opportunity and, perchance, a responsibility to compare these models systematically. Perhaps one of the best ways to assess a headphone is through comparison with other headphones.  This is because:

I have used this test method many, many times on many headphones.  I used four songs, all encoded in Apple Lossless Format at CD quality (I actually bought the CDs and ripped them... no internet download involved) and played by my Apple iPod Touch 5th Gen.  Because each of the 10 acoustic tests used a limited segment of music (2 - 10 sec), an infinite loop was used to repeat the appropriate segment of each song while headphones were switched in and out.


The 10 tests were as follows:


These tests generally emphasize what I find most pleasing in a headphone, namely high-frequency-related features including transparency, upper harmonics of sounds from drum-head, brass, organ pipe, and string bass, and high-resolution effects such as fine detail of each shaker sound and the finger on the bass string.

I have run 52 comparisons of Grados over the years using the methods above.  Here are links to those tests.  The link names themselves indicate which three headphones are being compared at a time:

Here are the results, as a tile of tables, of the above comparisons.  An individual tile appears in the respective thread linked above, with further discussion and often photographs of the headphones. Data from about 60 comparisons of various Grado headphone models to each other used in this master comparison.

Here, I choose four major features from those 10 and rank all 26 headphones for each of the features. I then rank the headphones overall based on their ranking for each feature.  This work involved the merging of multiple 3-way rankings for each of four features into one 13-way ranking.  Some ties remain when I could not hear a clear difference, and there were many additional tests I had to perform to merge two disjoint lists of three into an integrated longer rank order list.

The features I chose were most important to my listening and were fairly independent of each other: We can "average" each headphones score to come up with an overall four-feature ranking of the headphones, from top to bottom.  Here a perfect score, if a headphone achieved 100% in each of the four attributes (Transparency, Bass, Treble, Soundstage, and Treble), the total score below would be 100%.  However, the same headphone does not lead each of the lists, so even the best will not score 100%:

Approximate overall ranking of Grado headphones based on comparison scores on 10 acoustic tests.

Due to the nature of a three-way comparison, the difference between two headphones, as represented by numerical score, can depend upon the identity of an unrelated third headphone in the comparison.  The approach below avoids that problem.

Here, we compare all pairs of headphones that can be taken from the three way compares.  Every three-way compare (A, B, and C) yield three two-way comparisons (A to B, B to C, and A to C).  Pairwise comparisons are made by simply scoring for how many of the 10 features each headphone beats the other.  If each headphone wins on 5 of the features, the score is 0; if one headphone wins on 2 and the other wins on 7 and there is one tie, the second headphone scores a 5, as winning on 5 more features than the other headphone.

We then set three levels of "similarity"


Here is the resulting matrix: Model vs. model comparison matrix of Grado headphones.  Largest differences are solid boxes in the color of the winning column or row.

For example, we can see that the PS1000 (row 10, blue, or here, actually gray for alignment, but in a blue header) is approximately equal (within winning one feature of 10) to the GH1 (the "0") and significantly better (i.e., winning out on more than 3 of 10 features) than the GS1000e, as indicated by the blue square in the GS1000e column.

We can trace back these two way comparisons and come up with a grouped list of headphones, from winning most feature contests to winning the least.  When there is a not a clear difference in score, headphones are grouped at the same level of the descending 10-step ranking here:

I have here compared and contrasted 27 Grado headphones, using comparisons of two or three headphones at a time on each of 10 acoustic features, using a standard set of musical passages.  The results indicate which Grados have the most transparency, most subbass response, largest soundstage, and best treble detail.

This is merely my assessment.  There are MANY other excellent assessments published here that compare Grados.  I will reserve the next post in this thread for me to start compiling links to some of those, sorted in a way to guide readers to particular headphone models, and doing this as my time permits.

Meantime, please post your own comparisons of different models of Grado headphones here.  Thanks!

Awesome as ever, John!
My journey into the Vietnamese earphone scene

AYA Nightingale YK-S: Breaking the norm
Notes Audio AT10: A surprise, to be sure, but a welcome one​
Little Dot I+ with Burson V5: a Grado & Audio Technica fanboy's dream come true!
Rise of the mid-priced DAC/amps: Mojo/iDSD Micro/M9xx vs Others

You win the internet today, John! I thought I was obsessive about my hobbies. This is an entirely different level. Amazing work.

So the RS2e is the best overall Grado headphone? (according to the reviewer)

hawkeyea said:
So the RS2e is the best overall Grado headphone? (according to the reviewer)
Click to expand...


According to the scores on the first list, where they are combined...yes.

It is interesting but not exactly in line with preference to rank headphones based on scores, as I did.  This is because each of the 10 acoustic features is treated equally, while in our minds, we may care more about one feature than another, or even care a lot about a feature that is non-acoustic (e.g., comfort!).  I value high transparency more than bass, and I do value comfort, so I would personally prefer an over-ear Grado that is transparent (GS1000i) to another Grado scoring higher in other areas.

So despite lists computed from scores such as mine, your preferences may vary!

I am in shock.
Just so comprehensive and complete.
We are all forever in debt to the efforts of ruthieandjohn.

Wow, this is great. Thank you.

Thanks for your awesome comparison. It's very comforting to hear (see what I did there) that my first and only high end headphone purchase of the RS2e was a solid choice.

I just noticed that according to your final analysis, there is a 26% difference between the GH-1 and GH-1/G.

So the logical conclusion is that the G cushions make the headphone sound 50% better than in its stock form. Really? While i'm sure there is *some* improvement, i'm rather skeptical it would be that a big jump.
You must log in or register to reply here.