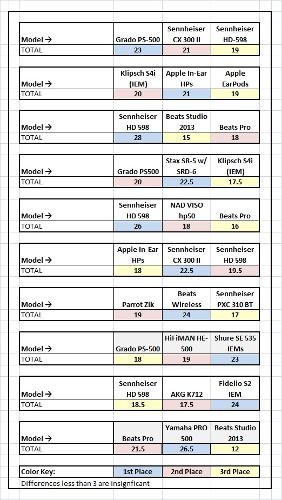 You are using an out of date browser. It may not display this or other websites correctly.
You should upgrade or use an alternative browser.
How We Rank Our Own Headphones -- Statistics of 2,000 Owner Rankings, Compiled

We Rank Our Own Headphones - Statistics of 2,000 Owner Rankings, Compiled

I have compiled an aggregated list of how we rank our own headphones, based on the thread "Rank the Headphones That you Own," ( http://www.head-fi.org/t/109756/rank-the-headphones-that-you-own#post_1284577 ).  Data is based on the most recent 2,000 rankings of that thread, extending approximately one year back.

This list differs from other lists in which a single reviewer compares multiple headphones.  This list aggregates the comparisons of many persons, each with some subset of the full list of headphone models.  It has been often said that the best headphone comparisons are those made by persons owning all headphones being compared:  this analysis attempts to capture these results.

This list is useful for someone considering a new headphone and wishes to know how folks who already have that headphone rank it against some others, with the hope that the inquirer will be familiar with some of the headphones to which it is compared.

To that end, I have:

The 2,000 headphone rankings were extracted from posts on the thread "Rank the Headphones that you Own" with dates ranging from 5/31/2013 through 5/16/2014.  For folks who (endlessly) kept updating their ranking, I tried to use only their most recent ranking (though I admit some double rankings slipped through!).

Those 2,000 rankings encompass a total of 340 users posting their rankings.  The rankings included 816 headphone models.  However, 544 of these models only had one person ranking them.  Many of these were unique modifications to commercially-available headphones (e.g., "AKG Q701 w/ bass port sticker removed").  Others were truly one-of-a-kind users of apparently non-customized headphones (e.g. only one person ranked the HiFiMAN HE-300).

Because the goal of this work was to provide some statistically reliable characterizations of how a particular headphone is ranked against others, I chose to concentrate extra attention on those headphone models that had at least 10 people ranking them. The following table identifies the 37 headphone models that met this criterion.


Fig. 1:  Listing of Headphone Models Ranked by 10 or More Persons, With Count Of Rankings And Positional Score (10=top rated).

The headphones each have a score ranging from 1 to 10, indicating (the reverse of) their average ranking across the persons who ranked them.  For example, if all 53 persons indicated in the "Count" column ranked the Sennheiser HD 800 at the top of their list, that headphone would have a score of 10.0.  The fact that it has a score of 8.9 shows that several of the 53 rankings placed other headphones above it.  In some cases, those were headphones on this list of 37 (e.g., HiFiMAN HE-6, Audeze LCD-3); in others, they were headphones not ranked often enough to appear on this list of 37 popular models (e.g., Stax SR-009, which had 6 persons ranking it).

RANKINGS OF MOST POPULAR HEADPHONES:

All 37 headphones appear as both rows and columns in the following table.  Each cell shows the ranking of the two headphone models that label its row and its column position.  For the diagonal, both row and column model are identical and it is filled with a black square.  Below the diagonal, the information is simply reflected from above (i.e. ranking the Sennheiser HD 800 against the Beyerdynamic T1 is the same as ranking the T1 against the HD 800), so cells below the diagonal are left blank, since the same information exists in the table above the diagonal.

Specifically, the colors are assigned by the fraction of multiple rankings won by the (blue) row title as follows: 80%-100% (blue); 60% - 79% (green); 40% - 59% (white); 20% - 39% (orange), and 0% - 19% (red).  Hence, a red dot means the same for the red column model (more than 79% preferred) as a blue dot means for the blue column model (again, more than 79% preferred).
The confidence of each ranking is measured by the number of pair-wise comparisons that contributed to the dot.  If there were 10 or more, the background color of the cell is a dark gray; 5 to 9 gives a medium gray background, and 1 to 4 gives a light gray background.  If there were no instances of a ranking of one headphone model vs. another, the corresponding cell is blank (white, no dot). Hence, it is interesting to note that at least 10 persons ranked the Sennheiser HD 800 against the HiFiMAN HE-6, and approximately equal numbers selected either as superior to the other.  Hence, its cell is dark gray with a white dot.

Do "bassheads" tend to favor a certain set of headphone models in their purchases?  Are there "trebleheads" favoring a different set?  If an unusually large number of people that have a Sennheiser HD 600 also have a Sennheiser HD 650 (and the data shows that they do!), should you get one too to go with your HD 600?

This portion of the effort looked for pairs of headphone model ownership that were significantly higher than random chance.  The table below identifies where an unusually high number of persons that have one particular headphone model also have another headphone model.

I need to look at these correlations more to find other effects, but I submit the data shows a "moneybags" effect with its heavy correlation in the stratosphere of top-ranking headphones at the upper left... people who have HD 800s also are more likely to have other top-end headphones such as the HiFiMAN HE-6 and Audeze LCD-3 (they probably have Stax SR-009 too, but not enough are in the data set to appear here). This sort of table is a start in automated recommender systems such as Netflix or Amazon, where user product preferences are predicted from their preferences of product they already have.

This data is really a small subset of the information that is available.  If you are considering a headphone purchase or want to know how a headphone model fared in this data that did not appear here, just post to this thread and let me know, and I'll be glad to post both statistics and (if not too numerous) individual ranking lists (sometimes, such as for the HD 800, there are too many, 53 in that case).

For example, I have been pointed to the Beyerdynamic T 5 p as a great audiophile headphone for iPod portable use.  Only 6 folks ranked it, but I can retrieve the six ranking lists as shown here and see what headphones are ranked better and worse than the T 5 p (and by whom, if I want to ask questions).


Fig. 4: Table of the Six Rankings for the Beyerdynamic T 5 p - each ranking list is a column, with the number at the top giving the rank order position, in percent, of the model of interest (0% = top of list; 100% = bottom of list).  This is an example of the ranking lists that can be extracted for any headphone in the database.

Great post. May get more traffic in the regular headphone section though.

NAD VISO hp50s were in the mix, but since there were only four ratings, they didn't make it into the 10-or-above cut.

Here are its four rankings (by the way, I have them and was Rater #4, on the far right):

Thanks for going to all this effort. The results are quite fascinating.
“Beware of false knowledge; it is more dangerous than ignorance.”
— George Bernard Shaw
❖ DCA Stealth Review Video ❖
❖ High-end Headphone Shootout ❖ Youtube ❖ hear.audio
❖ Funny comments from the Forums ❖

Not sure it makes sense to separate:

When owners started adding HP's and subtracting HP's I just gave up.

The stats you compiled are amazing did you reach outside that thread or did you take it further?

claritas said:
Not sure it makes sense to separate:

I understand.  I've seen some folks cite specific design or sonic differences between LCD-2 and LCD-2.2, and between Q701 and K701.  Not sure about SR80 and SR80i, and have NO familiarity with KSC75 and Porta Pro.

But when I didn't know, I tried to err on the side of separation, the thought being that if someone changes a design to improve it, it will (hopefully) improve and sound better, or at least different (hey, I even separated out those common models where the owner helpfully offered that they had gone to genuine unobtainium cables to replace the braided sterling silver ones that were stock!).

since a kind of structure has been devised, maybe a regular half or yearly survey can be sent out to each member...
instead of waiting for postings to be made to the "Rank the Headphones that you Own" thread.

When owners started adding HP's and subtracting HP's I just gave up.

The stats you compiled are amazing did you reach outside that thread or did you take it further?
Click to expand...

No, everything in the statistical analysis comes entirely from the "Rank the headphones that you own" thread, for the 1-year period of May 2013 through May 2014.  There is at least 4 times as much info prior to May 2013, but earlier I did a smaller analysis of just 1,000 entries from that thread and found that the data changed little when I went up to 2,000... for example 10 of the top 12 headphone models were the same in both analyses, with the Sennheiser Momentum and HiFiMAN HE-6 in the 2,000 model analysis displacing the AKG-K550 and the PortaPro in the 1,000 comparison analysis.

Next steps could include:

You did an incredible amount of hard work ^^

I love stats, and the HP's that are ranked are in the realm most can afford.

lorspeaker said:
since a kind of structure has been devised, maybe a regular half or yearly survey can be sent out to each member...
instead of waiting for postings to be made to the "Rank the Headphones that you Own" thread.

I dun see any stax... nor the AD, these happy campers aint shouting about these cans, just snuggling in with their whisky.
Click to expand...

Ask and ye shall receive (fewer than 10 people ranked Stax, hence they are not in my original matrix).  Here is the Stax SR-009, which had far more rankings than the other flavors of Stax (SR-007, Lamda, etc, which all had either 1 or 2 persons).  Not sure what the "AD" is, but be glad to look for it if you tell me.

I'm guessing that Stax owners probably may not be aware of, and have little participation in the "Rank your headphones that you own" thread.

Good job on the analysis though.