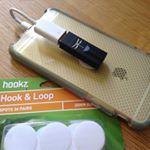 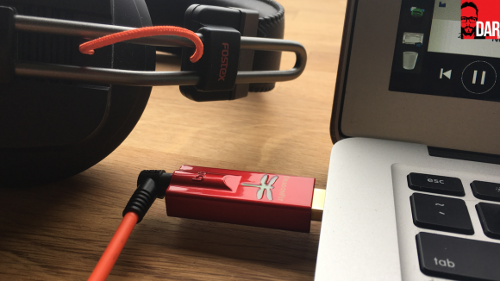 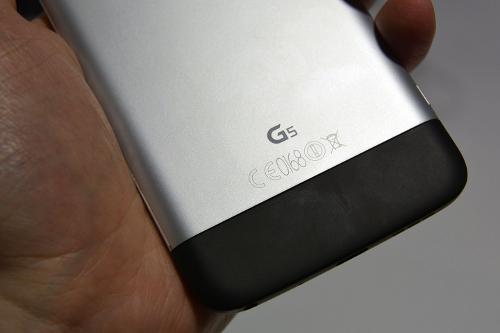 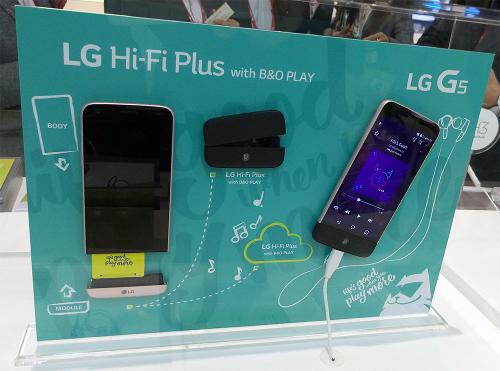 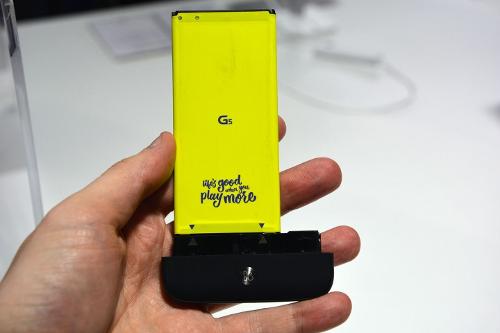 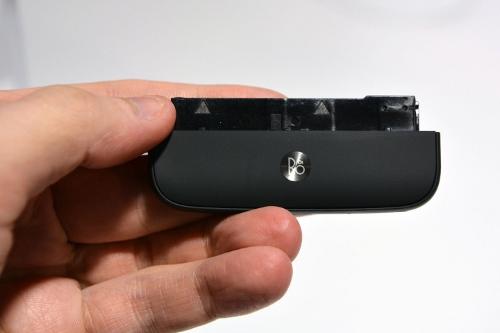 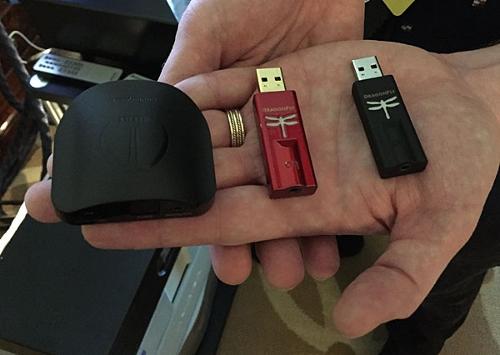 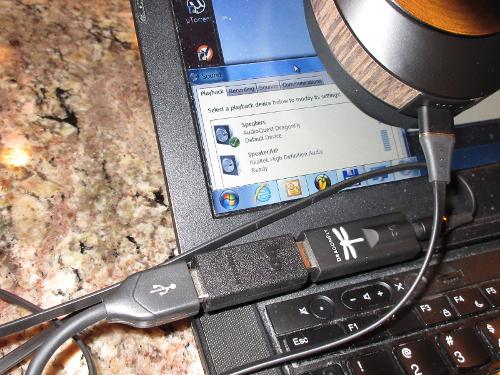 See full thread gallery...
You are using an out of date browser. It may not display this or other websites correctly.
You should upgrade or use an alternative browser.
AudioQuest Dragonfly Review : Affordable, Outstanding, Tiny DAC / Amp ​
(above) The AudioQuest Dragonfly USB DAC/amp, uncapped, with its included drawstring carry pouch.​
​

Is that a USB DAC/amp combo in your pocket, or are you just happy to see me? In the case of the new AudioQuest Dragonfly that would most definitely not be a compliment, as the Dragonfly is downright tiny.

In addition to tiny, here's what the Dragonfly also is: It is a USB bus-powered DAC that is built around an ESS Sabre DAC chip (audiophile-approved buzzword item, check); has asynchronous USB transfer via Gordon Rankin's Streamlength code (big-time audiophile-approved buzzword item, check); 64-step analog volume control (check); support for up to 24/96, including 24/88 (check); and is the size of a USB thumb drive. (What?) Yup. What the AudioQuest Dragonfly also is is my new USB DAC/amp combo of choice for travel/hotel use, and also my new coffee house USB DAC/amp. It's $250. And, for what it is, it's unique and superb.

Again, the Dragonfly looks like a fancy USB thumb drive (in a heavier duty metal chassis), but with a mini-jack (3.5mm) output on its rear end. If you plug a mini-plug-terminated interconnect cable into that jack, then you've got a DAC with a 2-volt lineout that you can plug into your favorite headphone amp, preamp, power amp, integrated amp, or receiver. If you plug a headphone directly into that jack, then you've got a surprisingly good (and outlandishly portable) DAC/amp combo. As a USB DAC, the Dragonfly, to my ears, exceeds the performance of my previous USB bus-powered DACs, more detailed, more full sounding, than the Styleaudio Carat-EMERALD and Fostex HP-A3. In fact, I'd recommend its comparison to anything I've used in the sub-$1000 price range, just because it plays in that ballpark, and does so in this exciting little (and pocketable) form factor. In other words, it doesn't just check off the audiophile buzzwords on its packaging, as a DAC, it sounds the part too.

Relative to the DACs I consider my current personal references--the Lavry DA11 and the Fostex HP-A8C--the Dragonfly falls a bit short compared to the DA11's outstanding detail retrieval (one of the reasons the ol' Lavry's still a favorite of mine), or the HP-A8C's level of detail (comparable to the DA11) and open, airy soundstage (one of my favorite things about the flagship Fostex). (The standalone amps I've used these DACs with include the HiFiMAN EF-6, Ray Samuels Audio Raptor, and Apex High Fi Audio Butte.)

As a DAC/amp combo (used to directly drive headphones), again, I prefer the Dragonfly to the Carat-EMERALD and HP-A3 for all headphones I've tried with all three of them. I have found that from the standpoint of directly driving several headphones I've tried with it, the Dragonfly is sonically comparable to directly driving those headphones from the likes of the Lavry DA11 and ASUS Xonar Essence One (though with less overall drive than either), but not at the level of the Fostex HP-A8C, which is fast-growing into one of my favorite audio components, the new Fostex flagship being possibly the best of the DAC/headphone amp combos I've so far used. What's remarkable, though, is how well the Dragonfly holds its own, at its size and price. All things considered, it's nothing short of extraordinary.

Some of the over-ear headphones I've used with it so far include the beyerdynamic T5p, Sennheiser HD 650, Sennheiser HD 700, Sennheiser HD 800, HiFiMAN HE-400, HiFiMAN HE-6, Audeze LCD-2, Audeze LCD-3, and the Fostex TH-900. And I'll continue to use the Dragonfly with those, with the exceptions of the HE-6 and the HD 800. With the HE-6, it simply felt underpowered, which is not anything for the diminutive Dragonfly to be ashamed of, as many dedicated desktop amps shrink at the sight of this headphone. The HD 800 could be driven by the Dragonfly to volume levels exceeding what I can tolerate, but sounds rather dry in this pairing, relative to my favorite HD800-driving amps. With the other headphones, though, it's easy to find satisfaction, and I've already used it as a hotel rig with the Audeze LCD-3, and it helped keep me from missing my primary rigs while away.

Sometimes just as challenging as driving top-tier over-ears--but for entirely different reasons--is finding ideal performance with sensitive in-ear monitors. Obviously, having ample power isn't the issue with most in-ears, but finesse can be an issue. Is the noise floor low enough? Does the volume control keep the channels matched at even the lowest volumes? From single-driver universal-fit IEMs to eight-driver-per-ear high-end custom IEMs, the Dragonfly is fantastic. So far, I've used the Ultimate Ears In-Ear Reference Monitor, Ultimate Ears Personal Reference Monitor, JH Audio JH13 Pro, JH Audio JH16 Pro, Westone ES5, FitEar MH334, Klipsch Image X10 and Sony XBA-3iP with the Dragonfly. Noise floor is practically nonexistent with most of those, somewhat perceptible with the MH334, and most noticeable (though still low-level enough to not be a big problem for me) with the ES5. In other words, the Dragonfly's background is quite black, its noise floor very low. As the Dragonfly uses USB Class 1 data transfer, it is, again, limited to 24/96, which isn't a problem for me right now, as I currently have very little music in my library above that. One advantage of this, though, is that the Dragonfly should work with most computers without the need for any driver installation--that is, it should be plug-and-play with just about any computer. The Dragonfly also supports 24/88.2, which I'm thankful for, as not all DACs do, and I have a decent number of 24/88.2 albums and tracks in my library.

With my Macs, I use Sonic Studio's Amarra software to both improve my computer audio systems' sound, and to facilitate automatic sample rate switching to match the track's native sample rate, and it works with the Dragonfly without any issues. AudioQuest even implemented a clever sample rate indicator on the Dragonfly's tiny body, which works by changing the color of the illuminated Dragonfly logo to indicate certain sample rates--green for 44.1kHz, blue for 48kHz, amber for 88.2kHz, and magenta for 96kHz. (Some of my other DACs don't indicate sample rate at all.)

One month in with the Dragonfly so far, and I'm absolutely thrilled with it. I have no doubt that the itty-bitty AudioQuest Dragonfly is going to make big waves in computer audio, significantly altering expectations at the $250 price point. I think it provides enough performance to satisfy most music aficionados, and all but the most demanding audio enthusiasts. The AudioQuest Dragonfly's tiny form factor is also a very big deal, not just because it's lightweight and fits in your pocket, but because it also encourages its use in places and situations where you wouldn't otherwise whip out a USB DAC/amp combo (like airplanes and places in your home and office where you use your laptop, but don't have a rig otherwise handy, to name just a couple).

So, yes, that is a USB DAC/amp combo in my pocket, and an affordable, outstanding one at that! Thanks Jude, is a writeup I've been waiting for.

One question I have is how is the power draw when using full size cans, esp. LCD-3s?  I imagine there's no getting around physics, but I have some Thunderpants and was thinking about using this with my 11" MBA.
MBP -> Mojo -> KSE1200 / HD58x

Very nice jude! and well written. I think i can agree with everything you said after hearing it at ChiUniFi a couple weeks ago. Absolutely loved it with my JH-13s

bobeau said:
Thanks Jude, is a writeup I've been waiting for.

One question I have is how is the power draw when using full size cans, esp. LCD-3s?  I imagine there's no getting around physics, but I have some Thunderpants and was thinking about using this with my 11" MBA.
Click to expand...

My Thunderpants is out on loan, so I haven't yet tried it with the Dragonfly--I'll let you know when I do.

As for its power draw: I'm not sure how much power it's drawing to do so, but the Dragonfly will drive the LCD-3. I've mostly used it so far with a few different MacBook Airs, an old MacBook Pro, and will be using it with the latest MacBook Pro with Retina display whenever it arrives (probably not for a few weeks). I'll bring home an old Samsung Windows netbook today, and see how it does with that.

(Let me know if I misunderstood your question.)
• Headphone Measurements: Did We Really Need A New Hearing Simulation Standard? •
• Head-Fi Audio Measurement Systems: The Gear •​

Edit: Curious to hear how this stacks up against ODAC/O2 or ODAC/c421, seeing as it plays in the same ballpark pricewise.

Very interesting little device. Eager to hear more about it.

I think this has potential from very thin laptops (like the Vaio pocket) as a new portable contender.

Seems like Sabre ESS chips are becoming more popular, apart from that I don't really see the similarity to the ODAC.

Any comparisons to the Centrance Dacport?   Quality of sound and power?  Is it on the bright side, or dark side, neutral?

Nice write up Jude thank you! Any chance you can do a comparaison with the Centrance DACport?
My Feedback , Equipments

Also, some direct comparisions against other Sub USD$1'000.00 DACs would be great! Would, specially like to know how it's sound fares against Schiit Bifrost and Buron DA-160 DACs.


PS: How many watts RMS can it output per channel working as HP-amp, and what's the max gain (in dbs) of it, please?

Wow I realized an amp was part of that tiny package! Great review Jude! Can't wait for someone to start comparing it to other DAC's in that pricerange.

typhoon859, I'm very happy that you enjoy your E17 and are content with it. Please understand some people are looking for the best sound money can buy, and are willing to pay much more. If you aren't interested in this product, I suggest you ignore this thread.

I am done now for certain period on Hi-Fi but i would read headfi as a hobby.

Sound is just a sound, get your preference, enjoy it and stop wasting money on them. @ 2012 Sept

Looks interesting! I'm pretty sure I'd lose something that small though. =/