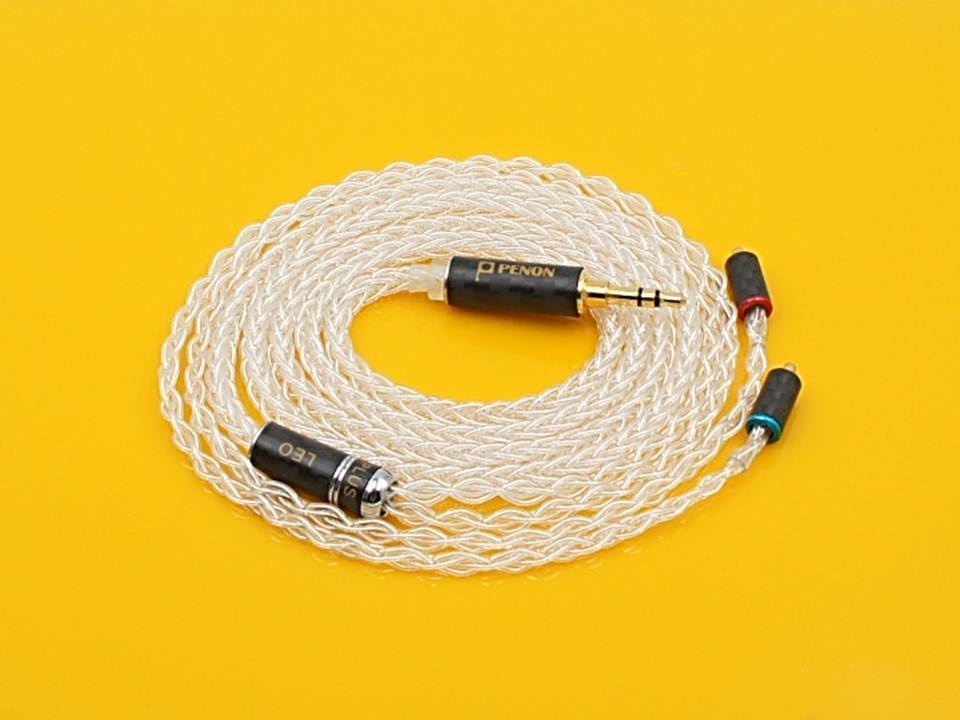 Cable adds stage, definition, precision, a clean background, and texture from treble to bass.
Cons: Premium means you have to spend $300 for such a cable. Good news is these don't cost $1800.
Penon Leo Plus 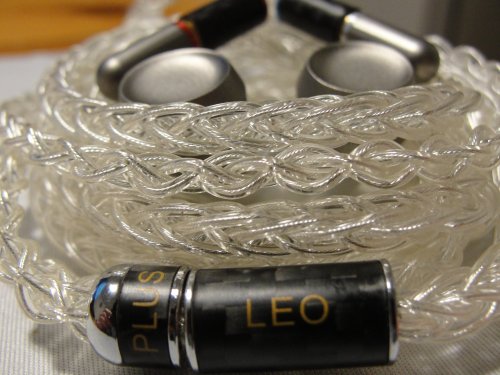 Leo is represented by the lion, and these spirited fire signs are the kings and queens of the celestial jungle. They're delighted to embrace their royal status: Vivacious, theatrical, and passionate, Leos love to bask in the spotlight and celebrate themselves.

Vivacious, Theatrical, and passionate good way to describe the Penon Leo Plus. I know this may be a bit over the top when describing a simple iem cable but I think the designers know what they are going for when naming such a cable.

Today we are talking about the premium cable from Penon. A strong name for a cable and then you add a plus. It turns out that Penon has an 8 core premium all silver cable which goes by the name LEO. So what was added to call this newer version with a plus? I suppose this is the type of name given to something that stands out and after using the Leo Plus, getting to know what it does. I feel this is a perfect name for this cable. 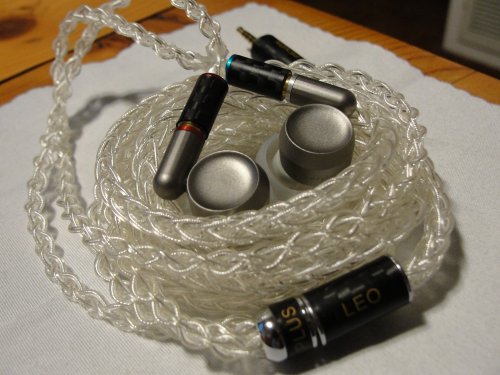 At the base of the 8 core cable is silver but incorporated into the silver we get a dose of some premium materials. Gold-silver-palladium alloy to make the cores. The plus means you get something extra. How does that translate to sonics?

First I would like to thank Penon for the review sample of the Leo plus. As an added perk I would like to mention Penon audio is doing something for their customers that I have yet to see in the world of audio. If you buy any products from Penon audio and choose DHL shipping. They will include some of their Masks. Penon is providing masks for folks that are affected by the spread of the scourge that is COVID-19. You can read about it here. The Leo Plus can be purchased here. 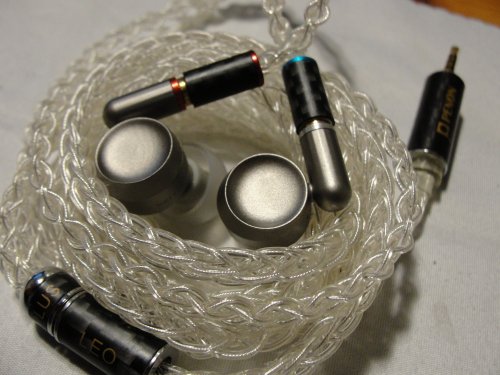 Onto the cable review. Silver cables all have one thing in common and that is absolute transparency. It is well documented that silver will give the best transmission of all things sonically. The added materials on the Leo Plus is new to me and at one point in my hobby history I was more than skeptical of the extravagant materials that a lot of the higher end cables use. Is it worth all that money to spend on a cable?

Let's say you have an IEM you just can’t live without. You have searched years for that perfect in ear that just does everything you like in a sound. You know all about how tips can have an affect on your sound but then what about the cable you're using?

Cables do make a difference in maximizing the ability of your in ears. If you're oblivious to it or in the camp that think they don’t. This review is not for you. Carry on soldier. Truth is cables do make a difference and here we have a premium cable that costs more than a lot of in ears. Let's be real $300 can buy you a cheaper DAP and a cheaper IEM to go with it. But for the folks that know a bit something about sonics and how a cable can shape the sonics. These are for you. 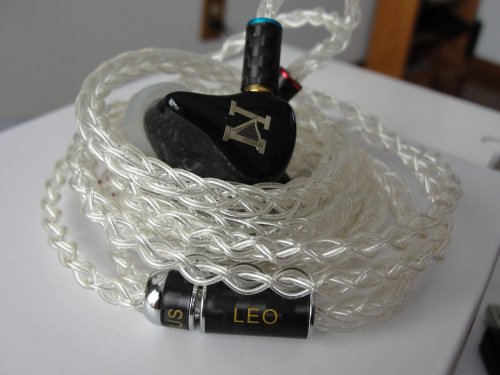 The Leo Plus makes your good sounding favorites into something different and for the much better. There is no other way to put it. First listen with a well burned in ISN H40. I couldn't believe what I was hearing. The H40 didn’t sound anything at all what I was listening to previously.

First there is the expansion of the stage. Immediately perceived the stage of the sound on the H40 expanded width wise that clearly goes beyond previous perception of the sonics on the H40. It sounded so wide I had to take them out of my ears to see if I had the same earphone in my ears. It wasn’t a slight jump in stage; it sounded like a different earphone altogether.

Then there was the definition of the H40. I did a full review of this earphone and I know the sonics on them blind folded. I listen to it just about every day and again I was astonished at the definition jump I was getting. I know the silver aspect was what was at work here. So the biggest surprise was not these two aspects of the cable change. It was the 3rd aspect.

Texture. Better perceived texture for mids, bass and even treble. Vocal texture especially has increased. Basically the H40 no longer sounded like the H40. I own earphones well above 1K in price range and the H40 now sounds more like a premium high grade of earphone and this was from a simple cable change?. The added effect was not subtle like most cables I have used on the H40 before the Leo Plus. It is clearly audible with and without the cable. 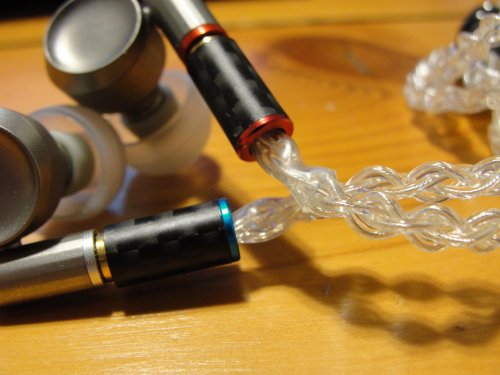 So my point is. As good as your in ears sound to you. Imagine the previous noted impression about how the Leo plus has affected the H40 onto what you're using. Then you might get a good idea why these cost as they do. I have to admit I had my doubts as noted earlier. But no longer do I doubt the higher end cables and what they do. You're not going to see me review a $1800 cable. There is a point where money is better used on other things that actually produce sound. But for what Penon is asking for these. It is more than reasonable. They are giving you a premium cable in every sense of the word. 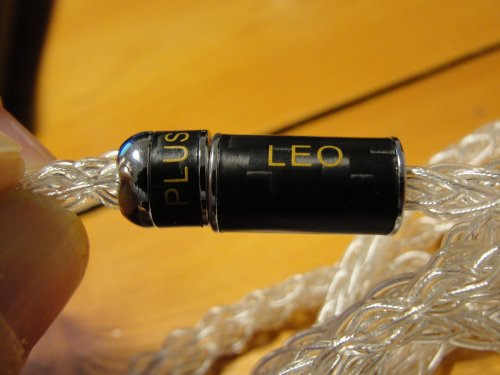 The Leo plus is soft 8 cores of the stuff that makes your in ear sound premium. Connectors, chin slider down to the termination is the highest of quality as it should. Soft supple with very minimum microphonics. I know $300 is a bit much for just a cable. But we are not dealing with “just a cable.” 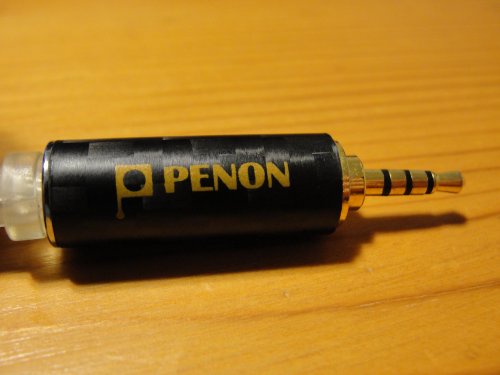 As all good things goes in life. Premium stuff costs more. Here is a case where you are most definitely getting your money's worth in an IEM cable. My measuring mark for such cables is. Does it do one better than the next price point cable I have owned? The clear answer to that is absolutely. Vs other cables I own as shown. 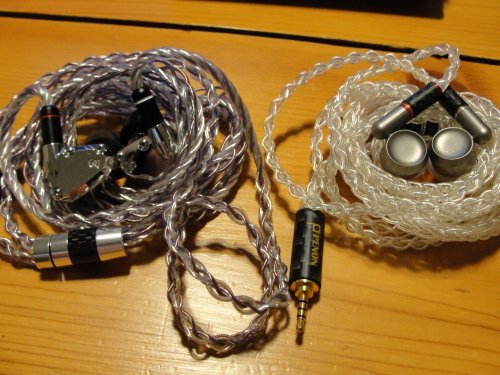 Vs community favorite. 175 Electro Acousti hybrid. Advantage Leo plus in stage expansion. Definition is similar here but where the Leo Plus separates itself is that sound texture. 175 cable is comparable for clarity and blackness of space but that added texture is something special on the Leo plus. 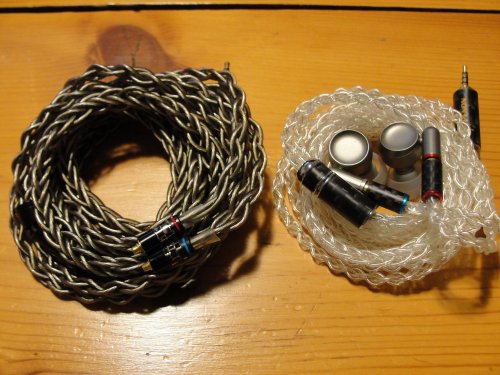 Vs ISN AG8. AG8 is a new cable from cable maker ISN and is unique due to the thicker cored 8 braided pure silver cable I did a review for here. Sound stage is similar given the fuller thicker cores which translate to the sound perceived but again where the Leo Plus separates itself is that added texture to the sonics with a touch more precision. Bass also has a bit more impact and definition in the region. 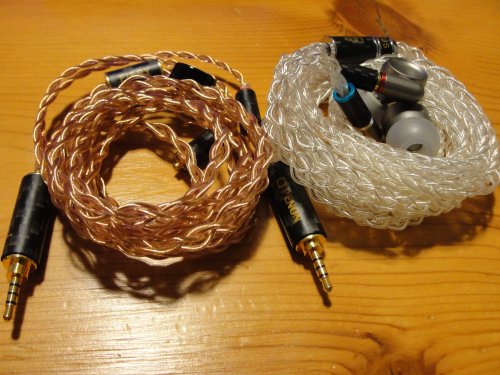 Vs Penon Fiery. I figure I would add a pure copper cable to the mix. Copper does not expand the sound quite like silver does so there is a clear difference in perceived stage vs the two. The Leo Plus is the grand hall. Fiery is an intimate venue. Fiery gives a very nice full definition to the mids and bass end as good copper cables do, but here is where the Leo Plus clearly shows its superior effect. The stage not only increases but again that sound texture has an increase here as well. You would figure mid bands would be won out by a pure copper cable. Fullness of sonics have some similarities but the Leo Plus clearly has the superior sound separation stage and texture to the sonics.

The Plus of the Leo is that texture enhancing ability I can’t find in any other cable I own. Before the Leo Plus I have had cables that adds to the sound better fullness, stage, definition, separation, enhanced treble to bass but never have I seen a cable enhance texture of the sound quite like the Leo Plus. Something new for me. Also of note. I do not perceive any thinness to or leaning out of the sonics as a lot of silver cables has a tendency to do.

Bonus. Leo plus on my other in ears.

On the Andromeda S. 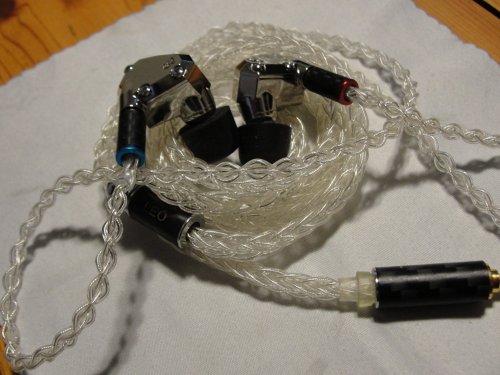 AndromedaS has one of the best balanced presentation of the various Andromedas CA comes up with regularly it seems. Leo Plus adds even a better bolder effect to the Andro S and is the best cable I have used on the Andro S. Adds that texture to the sonics and supreme sound separation and adds even a better sense of stage. Excellent pairing. 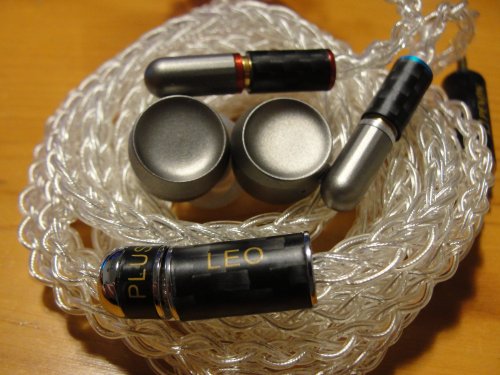 Oh wow. Where to start. First I want to say the stock cable that comes with the LUNA is no swiss cheese. It is another premium cable from the DUNU camp which comes with every termination possible with one of the best designed quick switch termination systems for their premium cables. It matches sonically perfectly with the LUNA but for grins I attached the Leo Plus on it. Attached it one time and that is all it took. 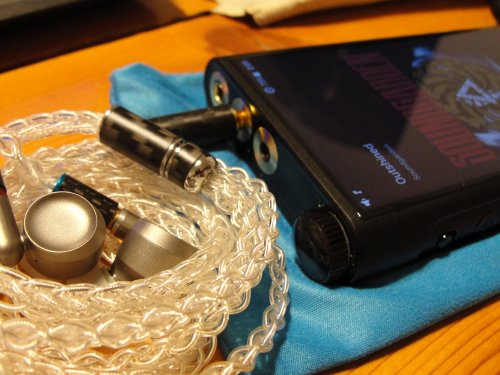 All I can say is. This is the type of sound dreams are made of. Full bodied luscious rich full dynamic sound from top to bottom. I realized just how extreme the Leo Plus meshes with the LUNA and decided it will be the cable I will leave on the LUNA for the foreseeable future. LUNA is a very transparent well balanced flagship from DUNU and the Leo Plus adds even a better sense of stage. The blackest of backgrounds. Even better precision. And surprisingly a full bored bass end. Vocal textures just mesmerize and can leave goose bumps. I don’t know if sound can actually get better with this one two punch. In any case this is not a review of the LUNA but more the cable I have decided to keep on the LUNA. Once you hear it. You can’t unhear it. It is my precious.

As you can tell I have quickly become a fan of the qualities of the Leo Plus. My only gripe is I wish I owned a few more of these cables to use with my other in ears. In the end as much as I wanted to keep this cable on the H40. Luna just sounds extreme with this cable and who am I to break up this happy marriage. Thanks for reading.
Last edited: Mar 18, 2020
Reactions: hop ham, SLC1966, buonassi and 4 others
Read more…