Where has this Mirror been my whole life? 🍷 - CVJ Mirror review
Pros: - flat neutral tuning that just works
- thick punchy bass
- natural mids
- well extended treble with good detail and clarity
- above average soundstage and imaging performance
- natural timbre
- good solid shell design
- very easy to drive
- highly recommended
Cons: - bass could be leaner to be "true neutral"
- slight upper treble peak could be annoying to some
- accessory set is lacking
The CVJ Mirror has been rated by one of my friend as "The best hybrid under $100usd". Thus why I have to check em out

After trying them out, I am indeed surprised! This is one of the more interesting IEMs that I've tested in a while.

It has a flat neutral tonality that, just like the name suggests, seems to pick up on small changes in sound from different sources like a champ.

Be it different dongles, different amps, different tips, different cables, the CVJ Mirror just seems to be able to pick on the differences between sources just a hair more than other IEMs.

The flat neutral tonality really does wonders here… it is sort of like a clean canvas, you could paint anything you want on it, and the end result would be yours sincerely.

For now, let's move on to the review.

*Disclaimer: Review will be done with stock cables and tips.

I really like the CVJ Mirror. As mentioned above, I had so much fun playing around with different tips and cables, plugging it into different sources, just to find out how it'll sound with the Mirror.

Don't get me wrong, the CVJ Mirror sounds great stock. But what makes it even better is that I could literally take a random ear tip or cable, pair it with the Mirror, and be surprised with the outcome it produces.

The CVJ Mirror is literally like what the name suggests - A mirror that reflects everything you throw at it. 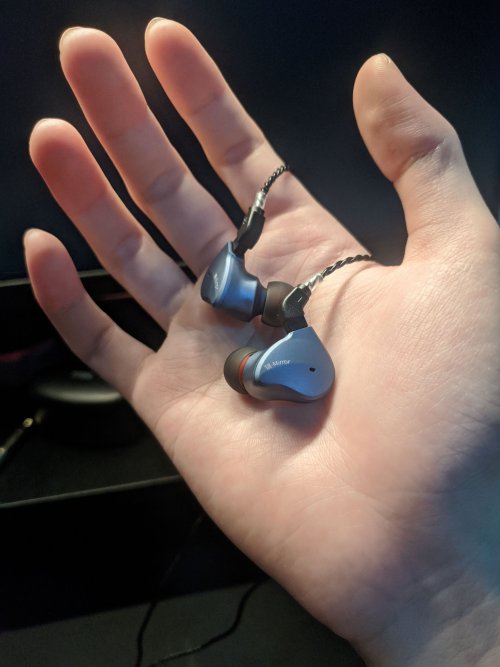 Intro
The MIRROR represents the current flagship of the company after the CSN and goes a sonically very interesting, in theory very appealing way. However, the potential was unfortunately wasted here and so the MIRROR even draws the short straw for me against the CS8, even if it actually has more to offer tonally.

Handling
Visually, I associate the MIRROR more with a penguin wing than with a mirror, but this IEM is probably the most discreet and at the same time the most appealing of the series in terms of design. It looks like it was cast from one piece, is compact and wears very comfortably. In addition, the robust construction makes the MIRROR a value both visually and haptically.

The accessories are not particularly lush and are limited to the most necessary, such as 3 pairs of silicone tips and a budget cable, as is also known from TRN, or BQEYZ. However, we still get a useful cloth bag for storing the IEMs.

The isolation is good and can be further reinforced with foam tips.

Sound
CVJ fortunately tries to stand out a bit from the budget chi-fi market by tuning their IEMs. The MIRROR has a fairly flat signature that is more akin to "neutrality" in parts. However, for my taste, they don't manage to eradicate the typical maladies and are not quite consistent with the (apparent) basic idea either.

The bass puts its focus on the mid-bass, which gives it a good punch. However, this is partly also a bit dry and not particularly organic. Certainly a matter of taste. In terms of quantity, I'm more than satisfied and would even welcome a few dB less to play up more neutrally here and give the mids a bit more sparkle. The bass has a pretty good texture and is not limited to a one-note bass. Bassheads certainly won't be happy here, but for me it also hangs in the air a bit, as it seems they couldn't decide where they wanted to go with the bass. The speed is certainly worth highlighting, even if it would like to be a bit crisper and could resolve better.

The mids are somewhat overshadowed by the bass, which brings more energy to the mid-bass in particular than the overall mids. But I don't find that too bad, because I generally like somewhat warmer mids and associated with it a usually somewhat more intimate voice presentation. The MIRROR often meets my taste exactly in midrange, even if I would sometimes like a bit more clarity. Still, I really appreciate that voices don't scream at me, but also don't disappear in the mix. To that end, they basically have a fairly natural timbre (even if the highs are more or less a destructive force of nature). Some might accuse them of a certain lifelessness, where I partly go along, but I don't always need a Himalayan plateau in the upper mids to be happy, on the contrary. Still, I'd like to see 2dB more around 2-3 kHz, or 2 dB less in the bass (60 - 200 Hz).

The treble is now the sword of Damocles for my ears with the MIRROR, because my listening happiness stops relatively abruptly when it goes into the higher frequencies and I only find fewer songs that I can listen to reasonably stress-free. Why the hell isn't the range around 6 - 9 kHz at least somewhat mitigated. Yes the peak is also a coupler resonance, which certainly amplifies the peak, however the energy in that range can't be dismissed either. Apart from the fact that I have seen such a pronouncement so far only with the MIRROR and maybe with the KBEAR LARK (seen in relation to the mids and the bass), the sibilant emphasis and associated sharp sibilants is not only annoying, but partly unenjoyable. This has nothing to do with treble extension, transparency or detail, as it simply sounds artificial and piercing. As is so often the case, a basically good signature is run into the ground again by an exaggerated high-frequency response (we're not talking about a special extension here, because this is rather average), or rather sent into space (Team Rocket sends its regards).Too bad, there was clearly more possible here.

The MIRROR has solid technical characteristics with an appealing imaging and a reasonable stage extension, which is still somewhat artificially extended by the exaggerated high tone. Reasonable for the price I would say.

Outro
The idea was good, the implementation less so, at least if you (like me) have a high sensitivity to sibilants and peaks, especially in the high frequencies. I welcome seeing an "experimental" signature under 50€ that deviates from the masses, but then they should have implemented it more consistently. Here was probably more the Asian market in mind, which appreciates a high-frequency emphasis significantly more or even requires it than others.

Unfortunately, even a micropore tape mod can't work wonders here and so only a drastic equalizer helps. With it the MIRROR can be bent then well to right, but that should not be the requirement.

My favorite of the CVJ series therefore remains the CSA.

DallaPo
With all the ones at my disposal....

SMSL SH-8, Zorloo Ztella / Zuper-DAC-S, iBasso DC1, LG G7+ and so on. In balanced mode even a bit clearer and more separated, but the high frequency problem remains.
However, these are budget IEMs that should perform well on the go, not on elaborate setups.

JasonLucas
So only expensive iems need good amps? That sure takes the fun out of budget finds. Did you try a cable swap? Every con you listed is easily fixed with a cable and good amp not a dongle

DallaPo
No of course not, that applies equally to expensive models! Of course, I have also changed the cables (copper and silver), because the supplied is not really useful.
But I also do not have to bend an IEM with all force, only to unfold its full "potential", there I would like first of all from the developer a certain preparatory work.
Then I can basically take any IEM that brings a certain driver quality and only need a good equalizer + amp (by the way, the SH-8 is far from a dongle, as is the iFi Audio ZEN CAN) and no longer need the choice on the market.
Such a review should be written as far as possible out-of-the-box, I think.
Best CVJ yet , awesomely neutral
Pros: Excellent vocals and mids
Cons: Needs amp to shine
Cvj mirror
Excellent vocals and mids
Detailed , great separation and wide sound stage, neutral tuning to slightest V
Treble snaps. Scales up with power
Massively benefits from small amp or dongle. Sounds awesome on lg G7 phone
Stays clean and loud. Natural timbre
Low end sounds like a sealed box subwoofer vs ported.
2ba 1 dd
Standout hybrid in 60-75$ range.
Excellent shell and build, all metal shell
Comfy fit, cheap cable.
Can be hot at 4-10k with low power and phone use.
Needs upgrade cable to shine, occ copper , spc, pure silver, all change the sound characteristics.
Definitely recommend, best CVJ to date.
One of the best hybrids less than 100$