Pros: Powerful Bass, clear Midrange, somewhat mellow highs. You can get these for lower than half of the retail price online.
Cons: Colored sound isn't for audiophiles.
Overview:
The Beats Pro is the Beats' top-of-the-line model, with a lofty price tag of $400. However, its price, along with Beats' reputation with being a hated-on brand, hides the fact that it actually sounds great. That hate reaches out far across the Internet, where trolls and hate fill every Beats-related thread. I'm almost certain that at least three-quarters of Beats trolls haven't listened to them once in their life (even if they say that they did). Even at Head-Fi, the Beats are a hated brand, but not as much as anywhere else. I've found a handful of other people across the Internet that actually appreciate the Beats, but since the trolling is so prevalent, finding them is harder than hard. 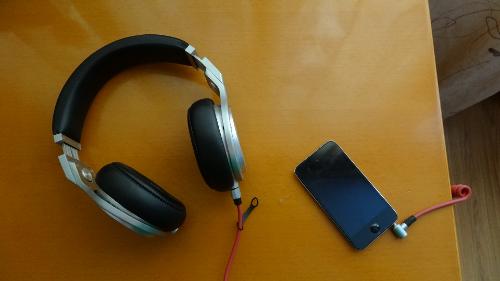 Many people, including me, acknowledge that the Beats line is really overpriced. But do they really sound that bad? In the Studio's and Solo's cases, yes. But what about the Pros? Let's find out.

In the Box:
The box, aside from being large, is unremarkable. Its contents include:

Design:
The Beats line has been notorious for being mostly a fashion accessory than anything else. Many of their endorsers are pure crap (Lady Gaga, Lil' Wayne, and...I just won't say it). Even then, their style and design can be easily called the best. The size, along with its two-tone gray/black color scheme, accented by the Beats 'b', easily makes this a head-turning, eye-catching pair. The pair also has swivel-up earcups that can be handy for DJs, as well as two jacks. You can't have multiple inputs with these, but the jack that isn't used as input becomes an output jack, so you could form a daisy chain. 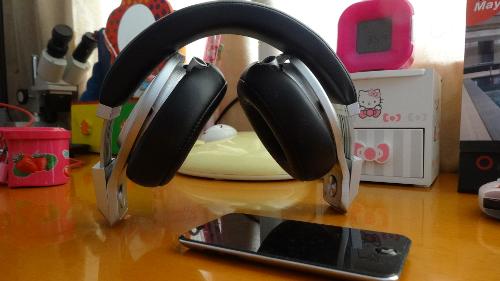 These headphones have pretty plush pleather cushions, though they will get warm (or possibly sweaty) in the summer while you wear them. The pair is also made almost entirely out of aluminum - solid aluminum, actually, which makes them a great heavy-duty pair. There's a catch to its almighty strength, however - since the frame, earcups, hinges, and headband are all made of solid aluminum inside-out, the pair is remarkably heavy (about 14 ounces). If you plan to buy this for long listening sessions, prepare your neck.

I'll be listening in to the genres that I listen to (listed above), starting with Electronica. In Daft Punk's "Get Lucky," the bass is remarkably powerful, as with all of the Beats models preceding it, but it doesn't muddy up the performance. It stays on its own, without muddying up everything else. The mids are clear and sound great with the bass. Vocals resonate well and have a good echo. The high range is quite detailed for a pair of Beats, but rolls off at higher levels. For a pair of Beats, this has a stellar sound signature; but for a pair of headphones in general, not so much.
Rap and Hip-Hop songs have a powerful kick drum, and that is well augmented with the Beats. Dubstep, whose bass lines get muddied up in crappy headphones like the Solos, are well-reproduced through the Pros. In the electronic side of the music spectrum, the Beats Pros shine in nearly every genre on this side.

However, this shine easily fades on the other side of the spectrum, where acoustic instruments reside. Acoustic songs require a large soundstage, but the Beats Pro's closed-back design makes it unsuitable for this. Also, it doesn't have that much detail when compared to other headphones in its price range. However, I really like the headphones' performance in the Solo Piano, Acoustic Rock, and Acoustic Jazz areas. The pair has enough detail to reveal much of the nuances of the piano, which also shows in the Acoustic Rock and Jazz areas, where the vocal range is refined and sounds great, and the background instruments can be heard with little effort. However, as far as soundstage is concerned, its soundstage is rather small and resembles a studio, which fits in with the genres I listen to, but for orchestral pieces, I would suggest steering clear of these.

Even in games, the Beats asserts its powerful bass. Audio effects are accurately reproduced, albeit with more emphasis on the low end. Voices are clear and sound as if you're right there. The orchestral sound found in games like Dissidia 012 sound quite wide, considering my previous trifle with its small soundstage. The piano's sound also doesn't disappoint, with commanding bass and accurate highs that accentuate the already stunning detail that I've experienced while listening through this pair.

Conclusion:
The Beats Pro was the first step in my quest for great audio. They're a sturdy, heavy pair of cans that have been weathered with constant hate over the reputation and price of this pair. However, this pair shines - and shines well - in its ability to reproduce great (though colored) sound in the electronic side of the spectrum; also, it doesn't disappoint in select areas of the acoustic side, either.
There are some things to consider debating before buying it, however:

For me and my love of electronic-based music, plus an unbeatable discount price, the Beats Pro was a steal. For those who share my love for electronica, don't be fooled by its high price; you can always turn to the Internet for great prices - and you may just get yourself a deal.
View previous replies…

kyuuketsuki
To be fair Amber, even Tyll said they weren't terrible headphones, even possibly good for DJing purposes. So at the price point of $125, I can totally see these being rated as 4.5 stars.

AmberOzL
I demoed them too, unfortunately I have friends who paid 300 euros for them. So I really took my time and demoed them. I am sorry but as long as it is something more than 75 80 euros, it is overpriced. About overall rating, even for the price, it seems too much to me. I said it in this way because I did hear muddy very muddy performance unlike the author. Comfort was an issue, build quality was an issue. Studio's seem to be more durable than Solo HD's but I would still suggest to baby them instead of using rough. I really can't give many positive things about them. I say, they are pretty much better than 50 euros cans, but def. not worth more than 100 euros or so. That's how it sounded to my ears. About Tyll, well I do respect him a lot and I always follow his reviews and trust his opinions but even for DJing, I would think something else than Beats.
I must add, the only Beats I liked is Mixr's but still wouln't pay for them either.

kyuuketsuki
We are talking about the Beats Pro... Not the Studios or the Solos. Neither of those are even worth mentioning. This is specifically about the Pros, which feel well built (though I've heard some people have had wire clipping issues with the folding mechanism). Again, these aren't TERRIBLE, but not good either. It's been a while since I last listened, but I do recall not being completely disappointed with the SQ.
And in the case that you feel that at the price of $125 (which is just about 75% off of MSRP) (Which to be honest I'd start to consider the possibility of being a fake) it is still too high of a rating, that is your opinion. The reviewer has his own opinion.
And personally, if I got them at that price, I'd sell them for a profit. I personally can't stand Beats, no matter how good the price is. It isn't my style nor preferred sound signature. But I do know many people who would actually like the signature of the Pros, and if they could be got at $150, there is nothing in that price range that has similar style or sound. (Better sound yes, possibly with the same sound signature, but Beats are at its core a fashion statement)

And again, Tyll said "might be good" for DJing, but seeing as he had no experience in that, he didn't want to say with any certainty.
Pros: Durability, appearance
Cons: Price
Well first off, these headphones are bashed on way to much just for being 'Beats'. The studio's straight up suck and the solo's are beyond bad. These suckers take on quite a beating because of the 'sins of their forefathers'. Personally, the price wasn't as big of a deal with me since I got these for 300 new, but price is the main downfall of these guys. They are far from worth 400 dollars for their sound quality. You could find the same if not better sound quality in 250$ headphones.

However, these headphones make up for this quality in their build. I found this strange coming from Monster. I have dropped these puppies from 6ft+ several times, slammed the chord in between a car door several times, etc. Not even a scratch (which is strange since aluminum tends to scratch pretty easily from my experience). They also have a removable cable (quite common in higher end headphones) that can plug into either side. This is the most amazing headphone cable out there. It is long and built to last and doesn't tangle at all. The swivel cups are also pretty fun and cool but really don't add all that much overall.

Sound quality wise these are lacking for their price. They would be worth it at 250, maybe 300, however they lack the outstanding highs. They have great bass (it could be a little more punchy) and pretty good mids, but the highs aren't close to anything special. These headphones also don't differentiate instruments as much as IEMs but they do give songs a solid feel. Despite not having the best sound quality, these headphones really bring rap, hip-hop, electronic, dubstep, and even hard rock to life. (if you like classical or softer more detail oriented music I would go with sennheiser or Westone).

Overall these are good headphones, don't listen to the hype saying 'beats are terrible', they really aren't all that bad.
Reactions: thatBeatsguy
View previous replies…

thatBeatsguy
Well, everyone hates the price (even I do). But what if you find it for $125? Would you buy it?

thatBeatsguy
"Do you even own them? Have you even listened to them?"
Finally, a guy who isn't a hater. Praise the Lord!

BadMoose
This is undeniably the most well-written review I've seen on this entire site.
Seriously, you go so in depth with your analysis of these cans! I hope one day I can write like you.

thatBeatsguy
Ugh, to be honest this review is crap. You should read on what Tyll has to say about this.
Read more…