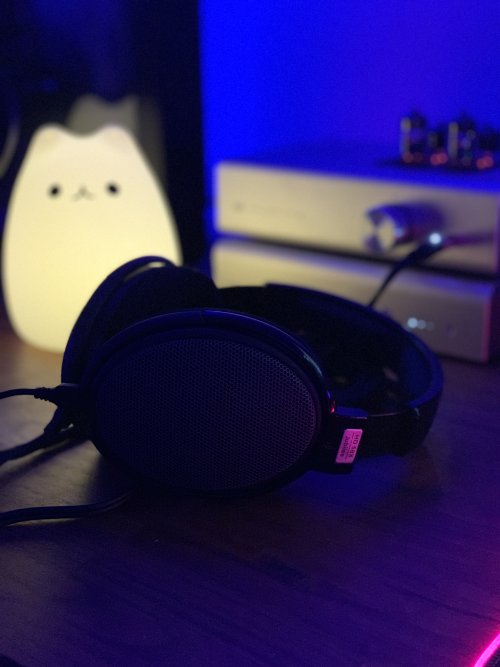 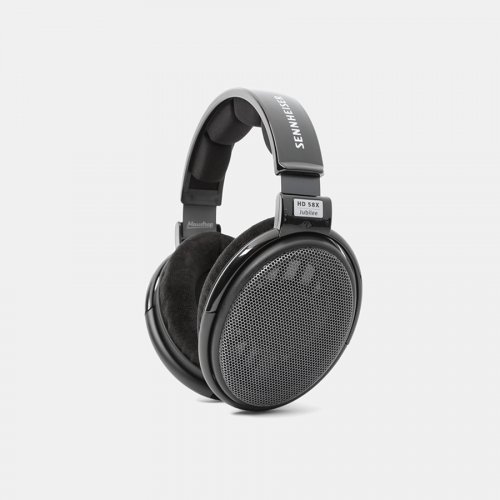 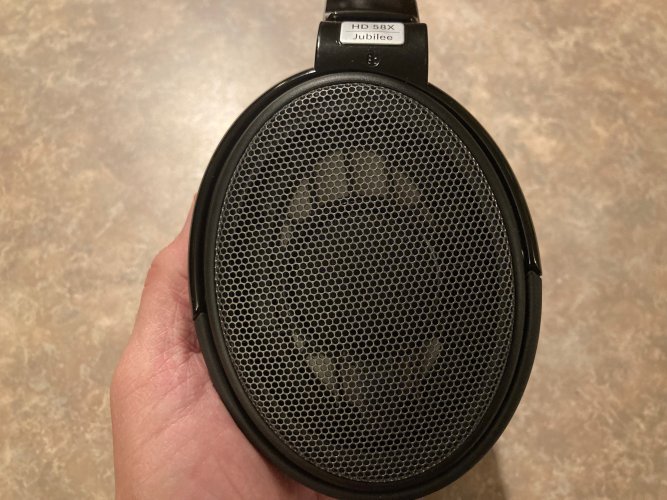 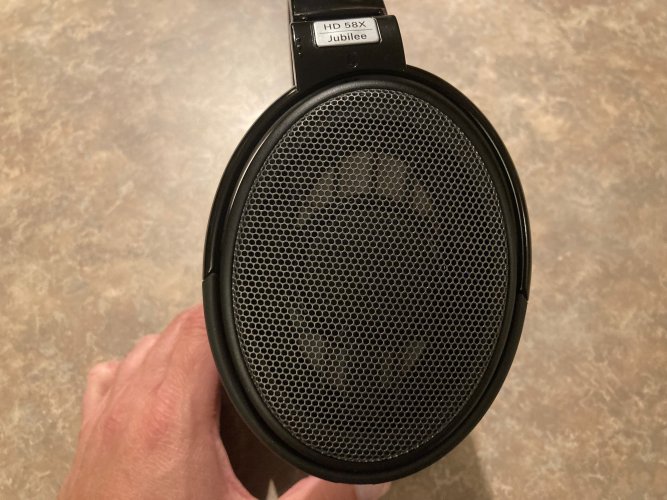 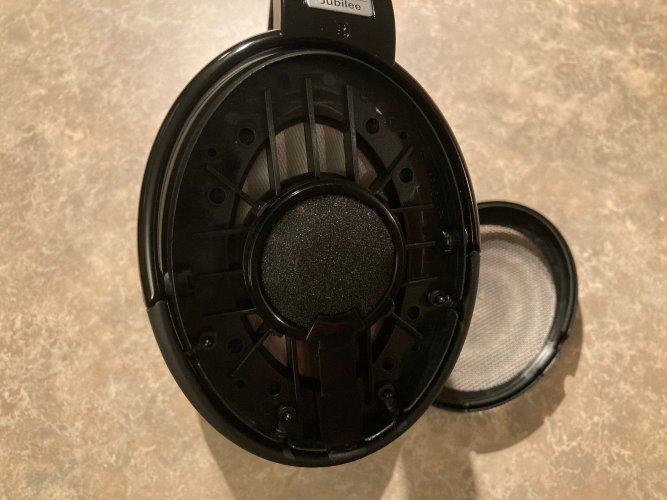 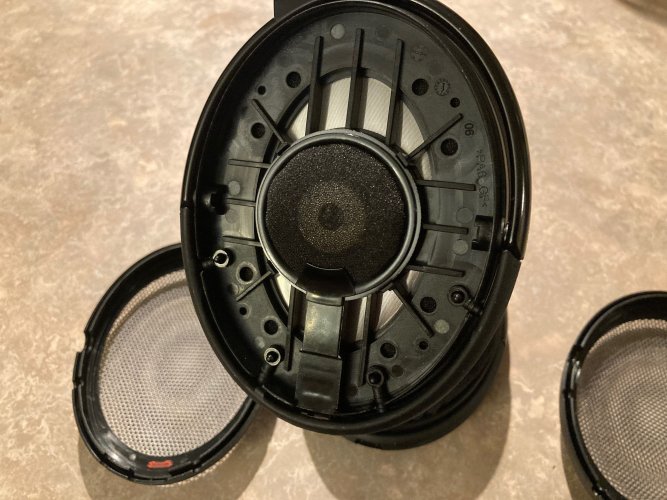 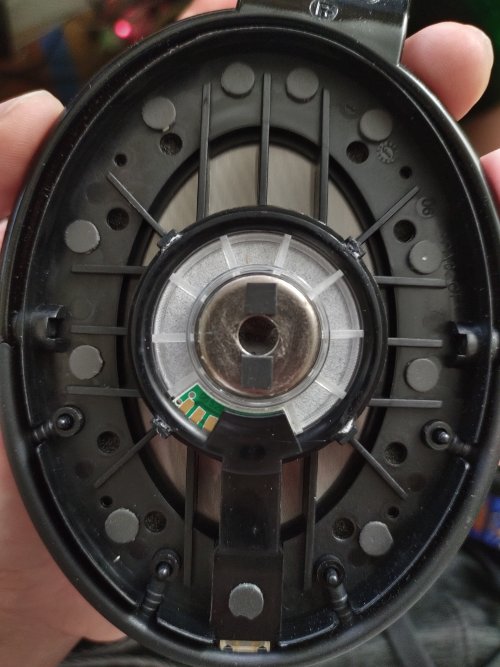 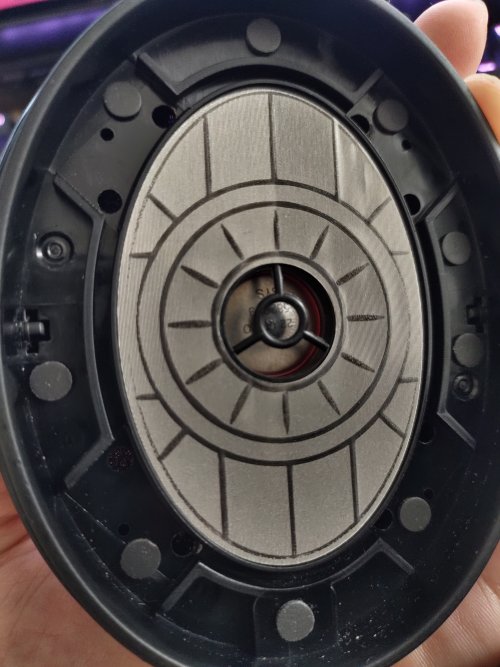 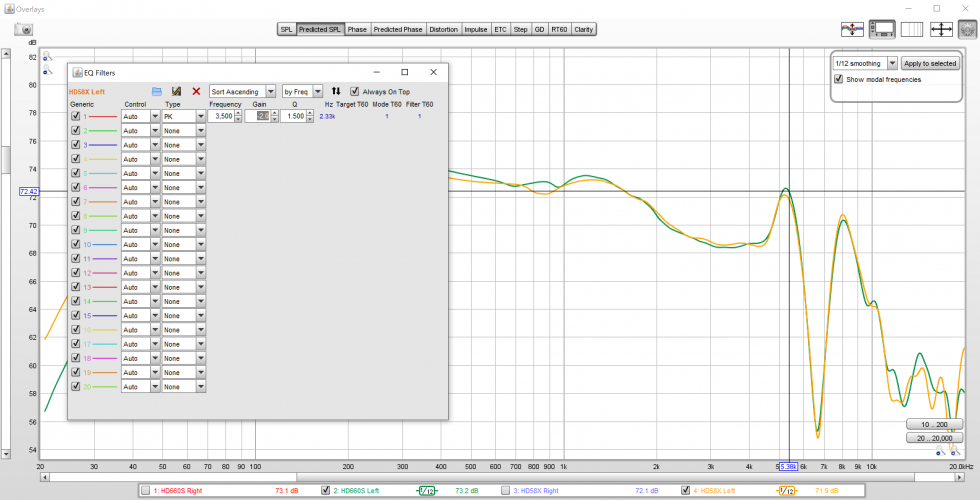 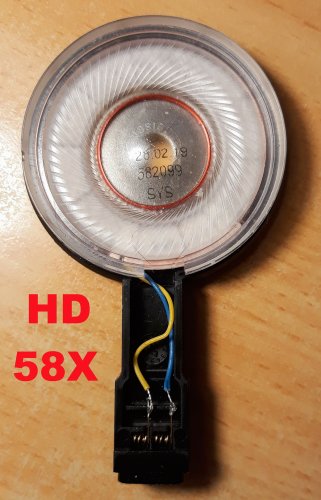 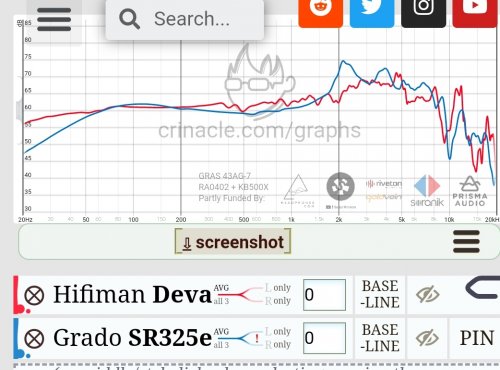 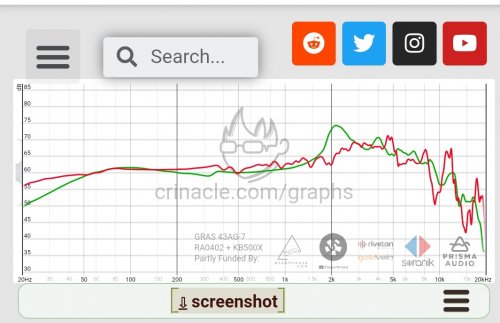 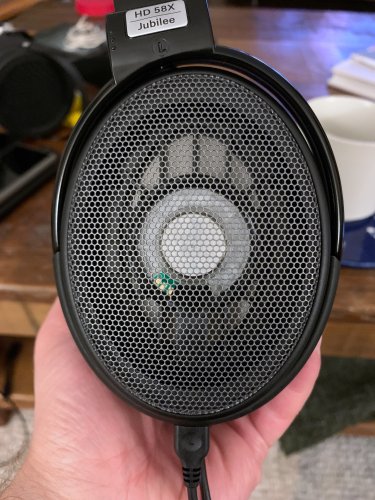 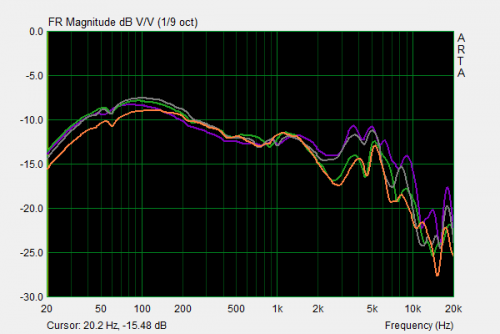 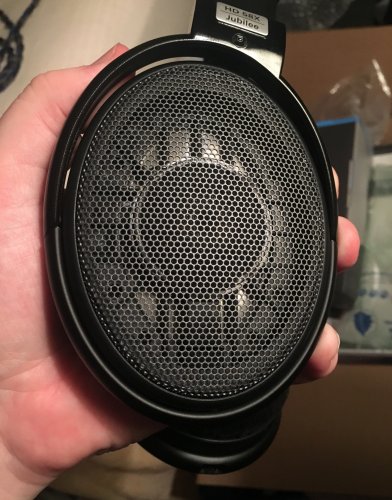 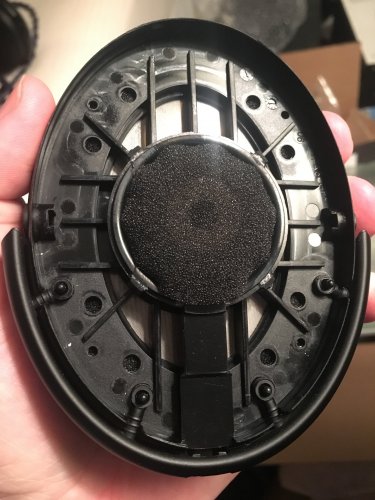 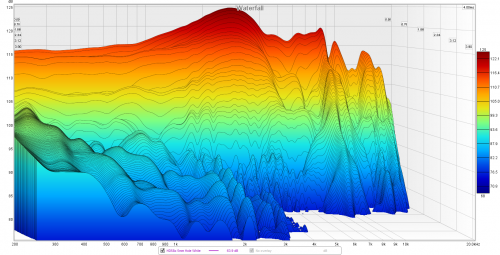 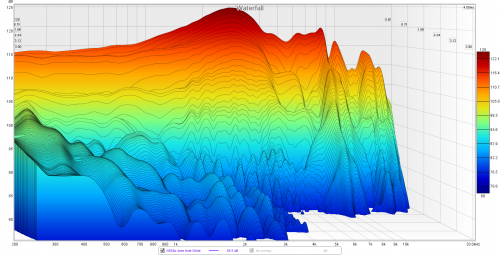 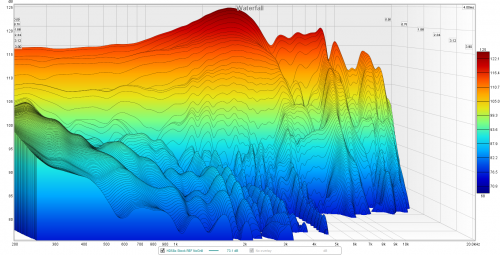 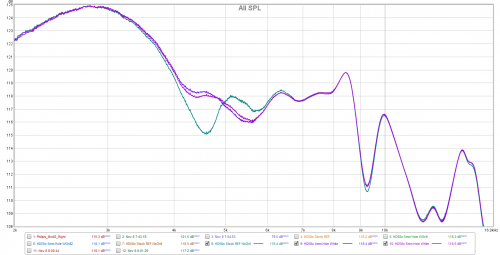 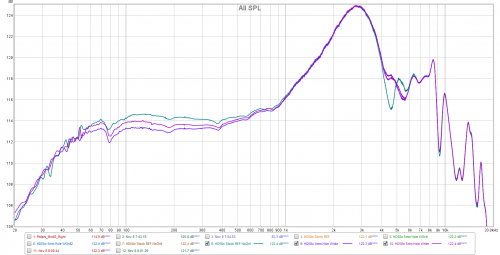 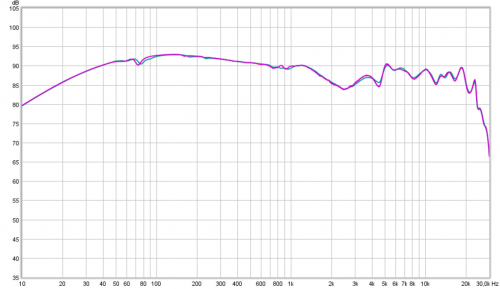 See full thread gallery...
You are using an out of date browser. It may not display this or other websites correctly.
You should upgrade or use an alternative browser.
Massdrop x Sennheiser HD 58X Jubilee Review & Measurements

Okay, so I had been desirous of modifying my 58X headphones for awhile to make them look closer to the prototype that was reviewed by Jude (Head-Fi), Steve Guttenberg (CNET), DIY-Audio-Heaven, et. al.

I reached out to Head-Fi forum member DivineCurrent who had inspired me to take the next leap after reading his post from last year. He gave me a few pointers, which I'm grateful for.

In order to try and match the foam Sennheiser uses behind the cup, and so as not to ruin the foam that came with the headphones, I purchased these:

I cut them at around 45 mm or 1.8 inches (roughly) in diameter. Initially, I tried to 'poke' or gently slide the foam discs I had created into the little crevices around the rear of the driver. Without any luck doing that it occurred to me that I had seen a video a long time ago from Tyll at Inner Fidelity where he demonstrated disassembly of the 580/600/650.

Using that as my guide, I was able to pop out the 'sucker end' of the "lollipop" as Tyll refers to it and slide the foam discs into place and gently snapping the "lollipop" back into place. On the left side, I pulled it out to far and had to use tweezers to get the coiled wires back into place... that was a little stress inducing. But on the right cup, I was much more gentle and did not have that issue.

Here are pictures of the finished product.

Now...the important question is... "does it sound any different to me?" No, still the same 'neutralish' 58X sound as before. No variations at all. But I didn't want to change the sound anyway. 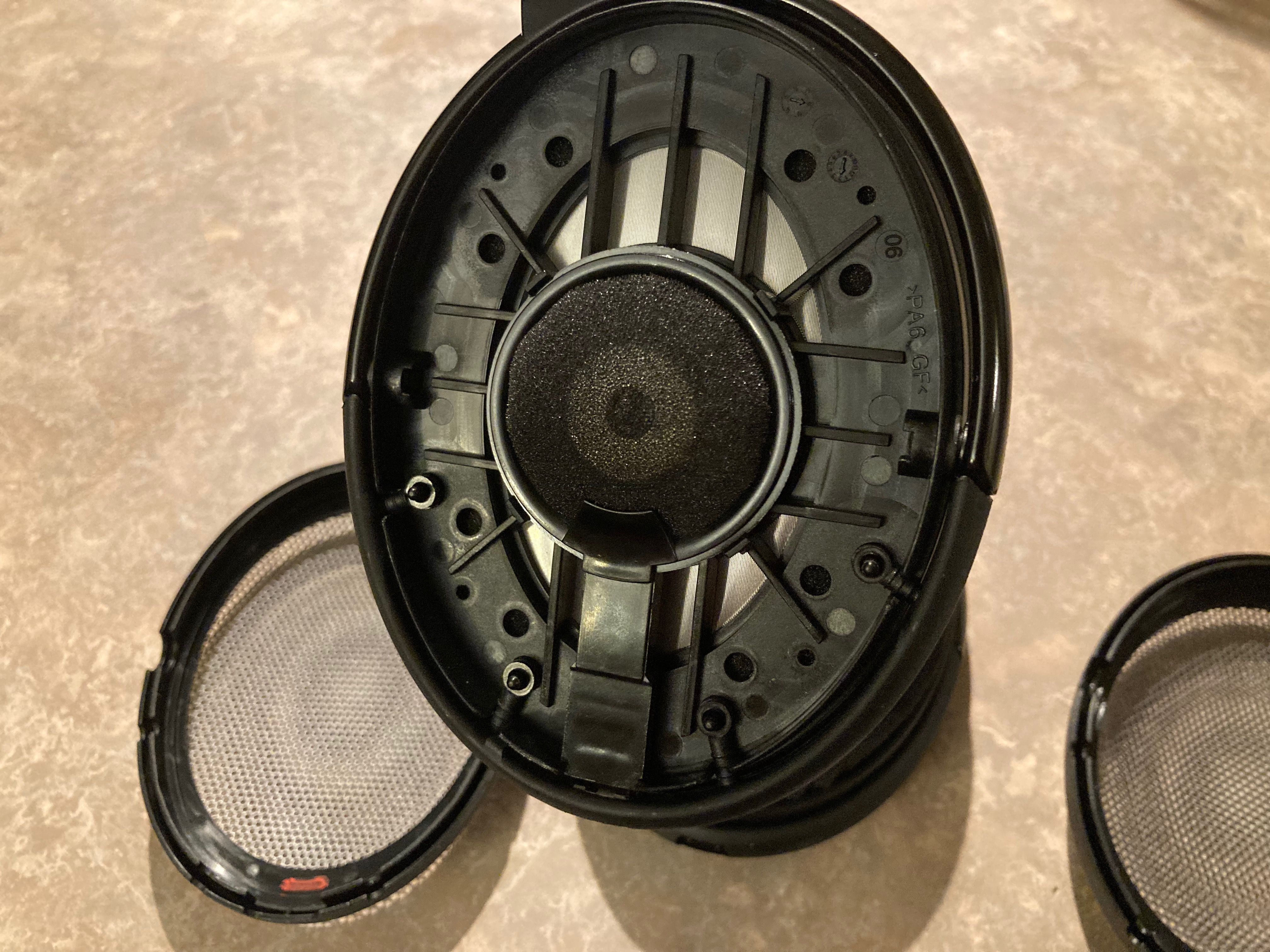 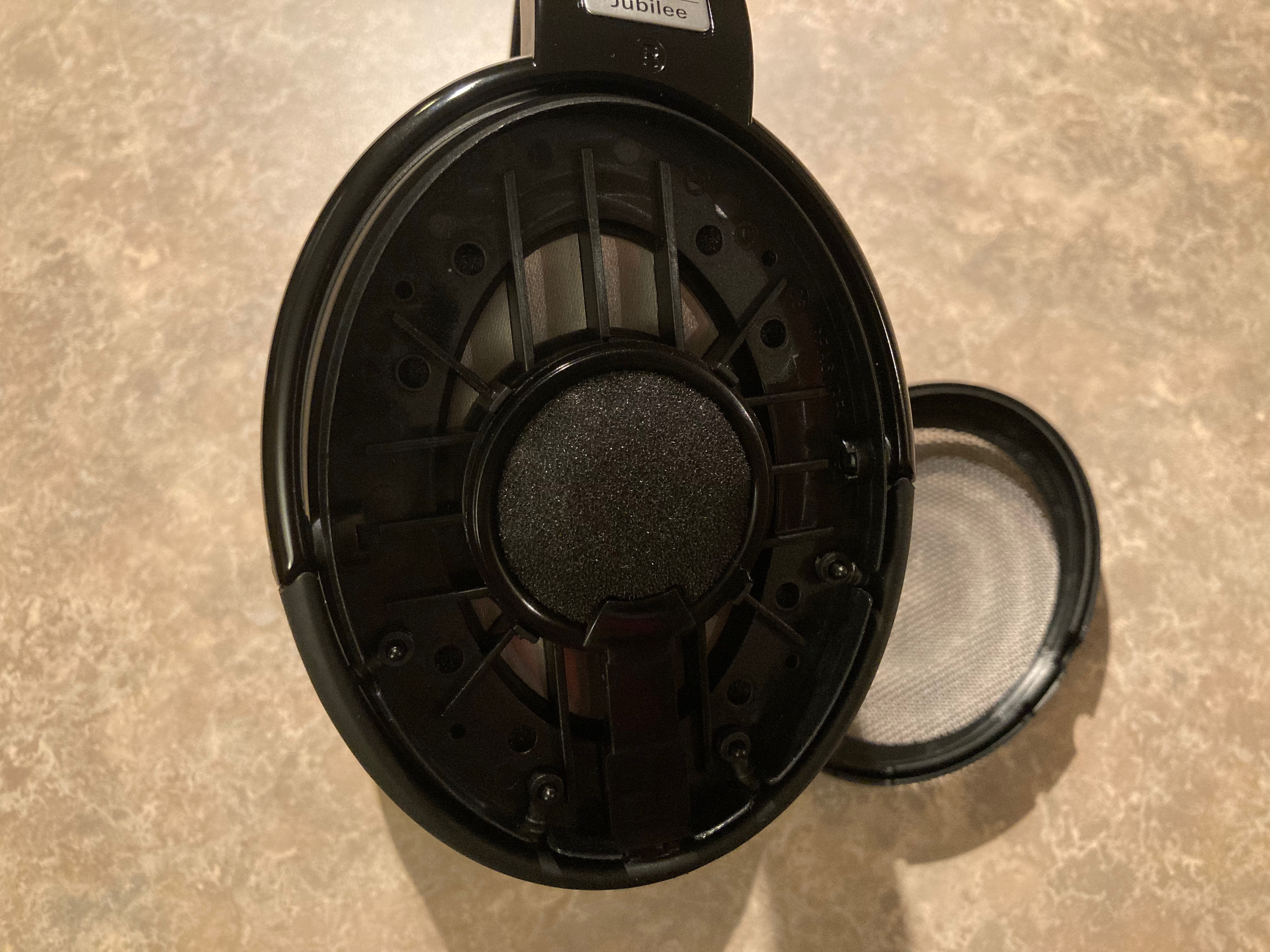 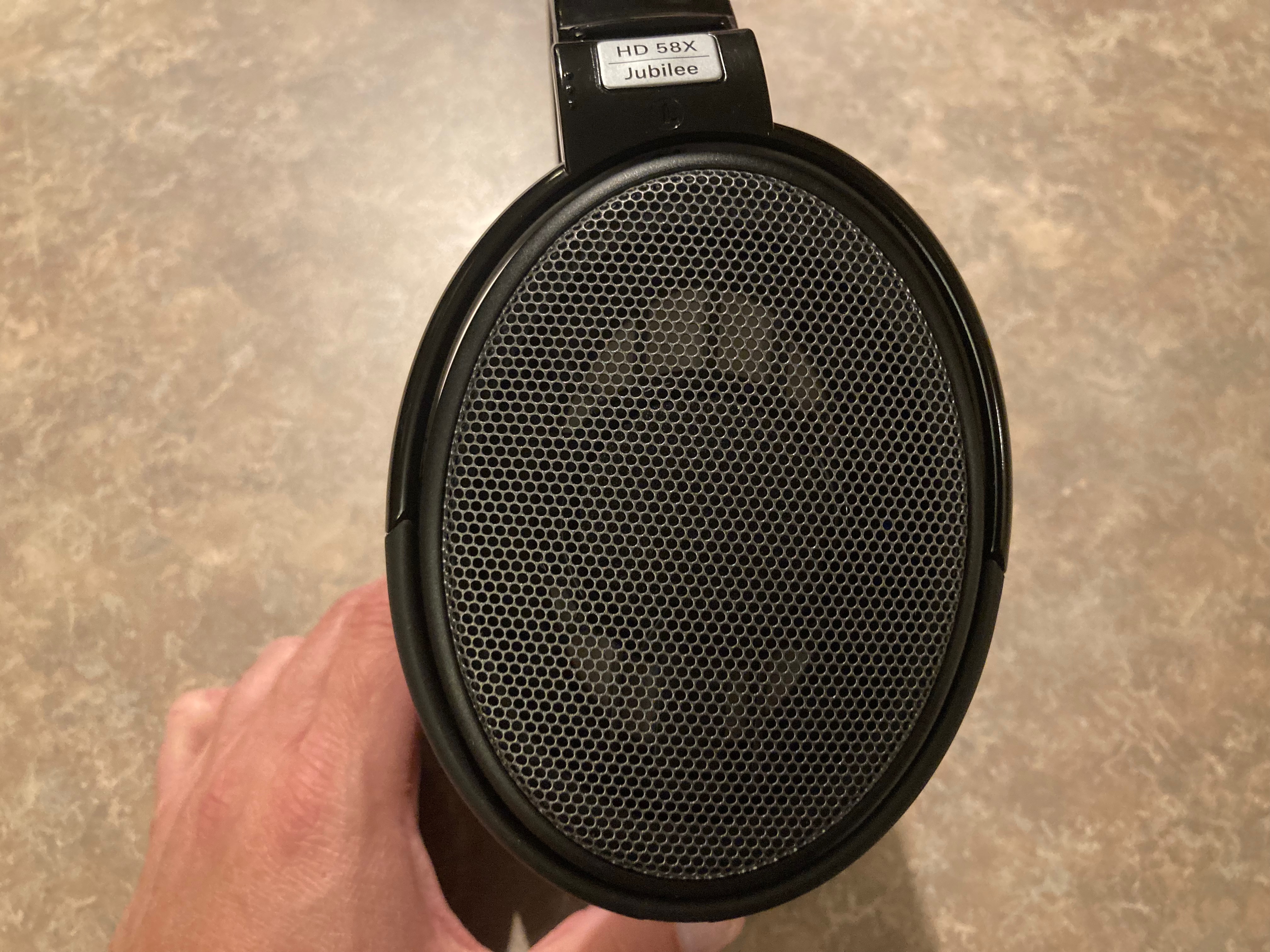 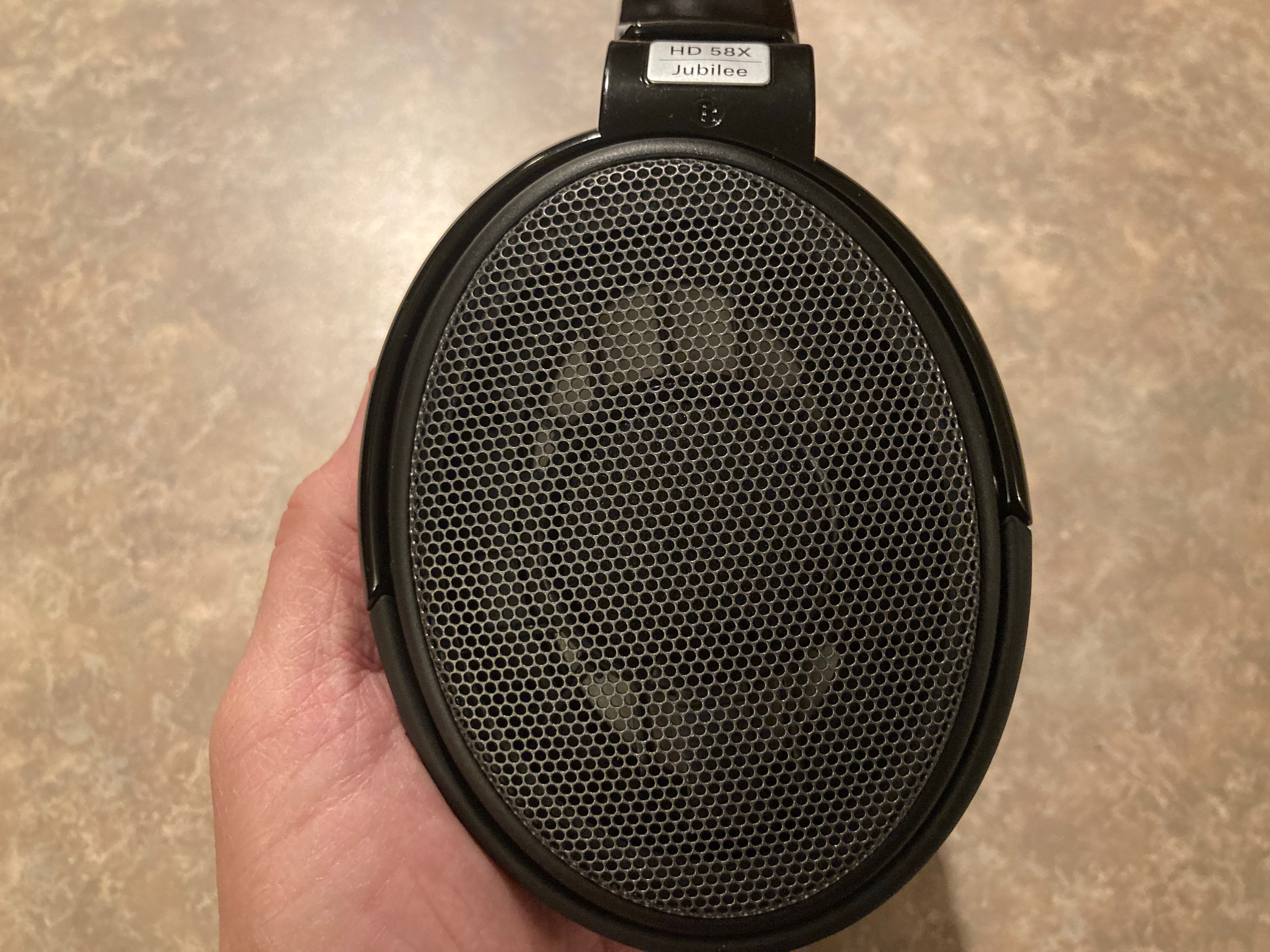 Thanks DivineCurrent and Tyll Herstens, wherever you are in your camper van.

Does anyone have a hi-res version of this photo? It's a pre-production (prototype) product shot. 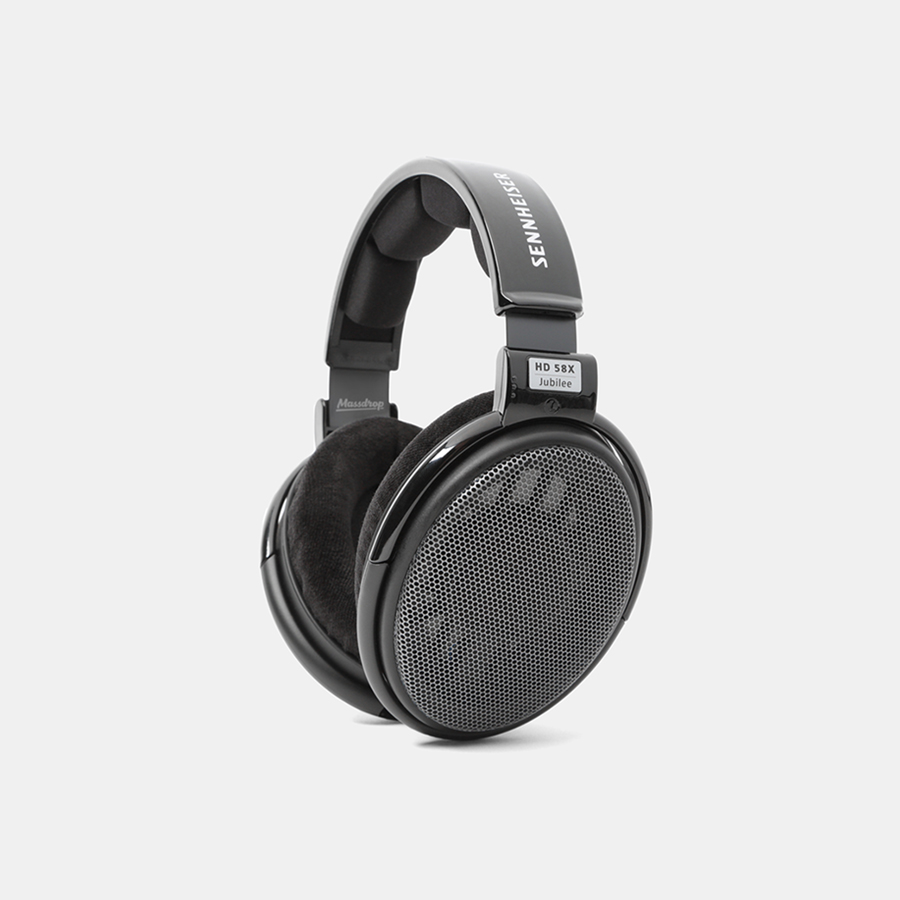 Decided to pick these up Monday when they were on sale. Got them in today, plugged them into my work PC with an apple dongle...was a little unimpressed.

However...switched over to the main listening rig and it seems much better. Spending the evening getting acquainted 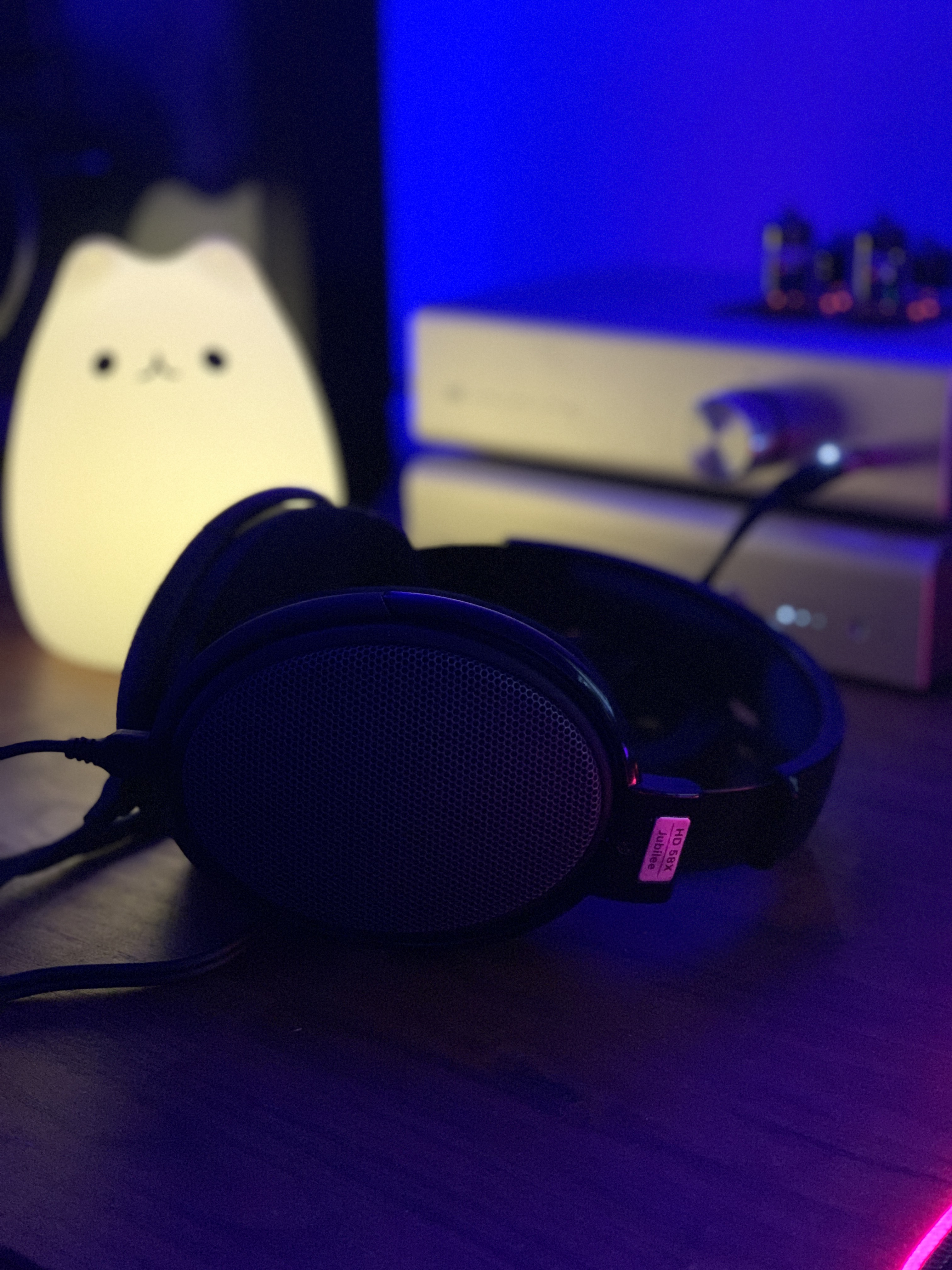 They do, do better with a better amp.
If I connect them to my phone, Im unimpressed.
When connected to my headphone amp, they sound pretty good!

It's been one of those weeks - I may as well post a mini review while it's still fresh on my mind.

The 58X I ordered are en route back to Massdrop. My primary reason to get the 58X were as a comfort improvement over the 599. While that is somewhat true, and while I did actually like the strong clamp force for the first hour or so, eventually I just needed a break before going back to wearing it. Ultimately, I decided to double down on my existing gear (6XX/800S) and got a new cable for the 6XX, and a HDV 820 second-hand for the 800S. Something had to give.

Out of the 4 Sennheiser cans I had (800S/6xx/599/58x), these had the best "sub-bass" or "bass extension" or what you may call it...but everything else just wasn't cutting it for me. Out of the 4, The 58X is easily the most intimate headphone of the lot. If I were to compare the intimacy 58X to the 6XX (because I feel they are both somewhat intimate in soundstage, the 58X moreso) using nonsensical metaphors, the feeling I get from 6XX is like being in a library with mahogany bookshelves, first edition Mark Twains on the shelf, with a hand-built stone fireplace and a velvet chaise lounge...where the 58X feels more like a library built out of IKEA furniture. I'm in the same room, but something is just not there. FWIW - I did try the 58X without the foam behind the driver/in the earcup - I liked it, but I have to agree with Kammerat Rebekka's point on the previous page - the foam removed makes me feel like I got the wrong can.

I got the 58X for my workstation, which I don't have a dedicated amp/dac for, only the Apple USB-C dongle. It sounded OK at best. The only time I really got to enjoy the 58X was when it was over at my main desk, alongside the 6XX and the 800S. Plugged into the Schiit Valhalla 2/Bifrost 2, the 58X sounded great. But the 6XX and 800S did more for me. It's difficult to justify having both a 6XX and 58X on my desk. While I did return the 58X, I don't feel it was for nothing. Based on my experience, I probably won't like the 660S, and maybe not like the 600's (but I am more inclined to try these out based on hearing about how well they do with tube amps).

What sort of tea did you use? I tried Ahmad and got no bass mod. I think different manufacturers use different materials for the bags.

schmalgausen said:
What sort of tea did you use? I tried Ahmad and got no bass mod. I think different manufacturers use different materials for the bags.
Click to expand...

Is it paper or some synthetics?

schmalgausen said:
Is it paper or some synthetics?
Click to expand...

Are you still glad with your mod? My teabag was paper too I guess, I fire it and smell wood smoke.

schmalgausen said:
Are you still glad with your mod? My teabag was paper too I guess, I fire it and smell wood smoke.
Click to expand...

Yeah, same opinion -- it's been modded ever since.
Super* Review on YouTube | Squiglink | IEM Rankings
R

I recently got the 58x and was enjoying them on the Schiit Fulla, but decided to try the ifi Zen DAC v2 and was disappointed in the way they sound on the ifi. Has anyone else tried the 58x on the Zen DAC v2?

To me my Phillips X2HR sound great on the Zen DAC v2, but not the 58x, except while gaming.

What's a good amp/DAC combo for the 58x?
You must log in or register to reply here.