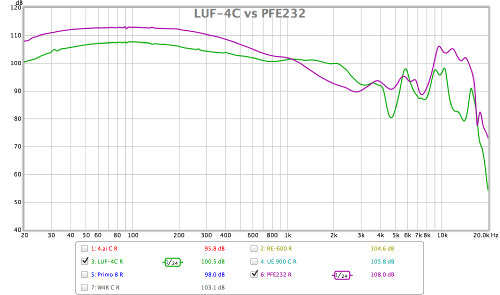 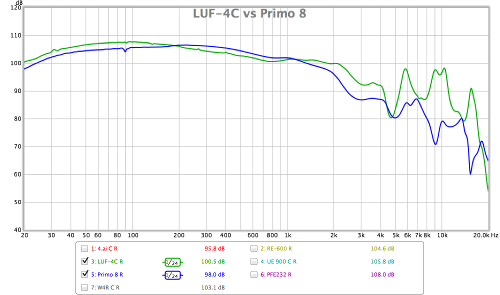 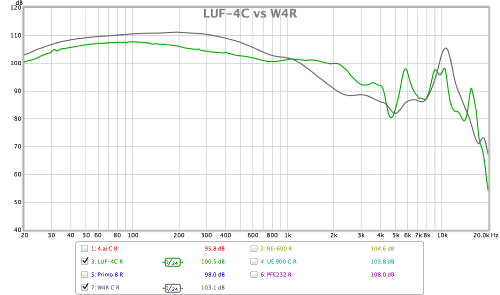 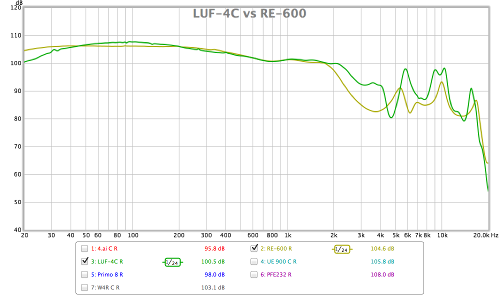 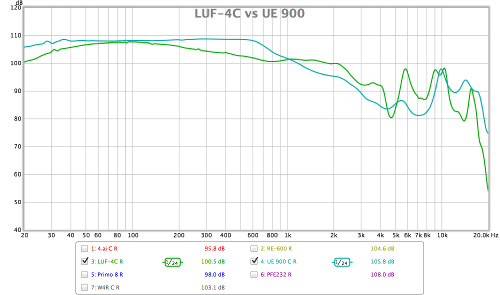 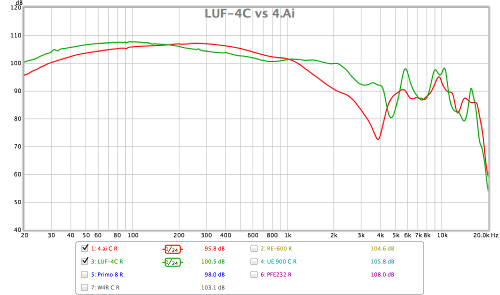 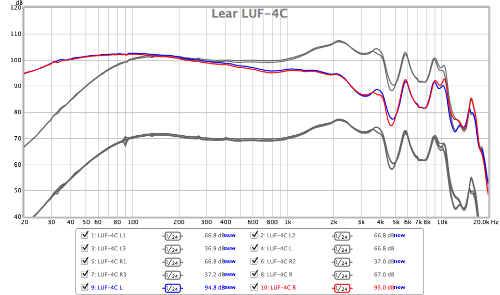 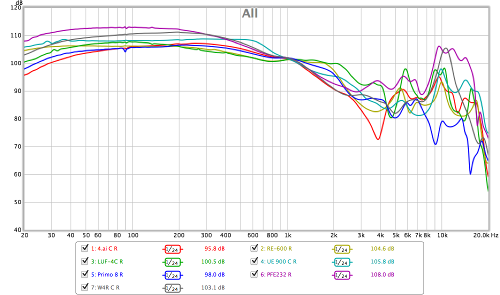 See full thread gallery...
You are using an out of date browser. It may not display this or other websites correctly.
You should upgrade or use an alternative browser.
Lear LUF-4C: Impressions and Comparisons

Be nice to noobs, we were all noobs at one point in our life.

I've had the LUF-4C for just about a week now.  The following impressions are general impressions and very basic.  They'll give you a general overview of how the IEMs compare, but are in no way in-depth.  More in-depth comparisons will come in time.

Though this isn't a formal review of the 4C, it does give pretty large insight into its sound.  A formal review will be written for a different blog/forum which I write for (on a volunteer basis).

Lear has some reputation on Head-Fi, though their LUF series hasn't caught on that much, they are known of.  So far, I know there is a formal review for all of the LUF-4 series, the F, B, and C all have reviews.  Though if you actually search, the LUF-4F has little information available for it.  That said, I hope to fix that a bit with this lengthy comparison.  This will put the LUF-4C up against the top competitors in the 400-600 dollar price range.  Let's take a look at the lineup: 
From the specs alone, you can see that the LUF-4C is the top dog in this list, if it was a couple years back, it would be at the high-end of the IEMs, though they've gotten new thousand dollar flagships  So the question becomes, does it prove to be an upgrade to the 500 dollar IEMs?  We'll see.

The other thing that sticks out is that although it's a quad-driver configuration it's setup is peculiar in contrast to the other quad drivers.  The others rely on a dual-low-driver setup while the 4C trades a bass driver to add a midrange one.  I will give some spoilers here though, the trade off creates a midrange that is focused, but very detailed in tonality; quite Ety like in many ways.

OK, now to get to some actual impressions, though I'll start with the non-sonic ones.  The housings do seem to be made out of acrylic and like any sort of custom, feel very nice in your hand.  My sample model came in a translucent blue color that looks simple.  The housings are a little large on this model and they do stick out quite a bit out of my ears rather than sitting flush (what I'd rather them do).  Overall though, they are comfortable to wear and do seem to be built well. 
The overall signature of the LUF-4C is warm over neutral.  In many ways, its tonality reminds me of the HiFiMan RE-400, but it does a better job in terms of quality.  It has a detailed, brighter midrange with a strong treble presence up top giving the IEMs a bit of energy.  They aren't ever harsh and the treble is soft enough for the most part; though, it could be a tad unforgiving at times.  Bass has depth and texturing into the lowest ocatves, but lacks presence at times.  The lower-to-mid bass offers a powerful impact with a quick, controlled punch.


Heir Audio made a big bang on Head-Fi with their 4.Ai which was a great headphone with a signature that tilted well towards the warm, lush, and inviting sound signature.  It quickly became a hit on Head-Fi.  The LUF-4C works on opposite principals trying to tend towards a brighter, more neutral sound; it expsoses some of the issues with the 4.Ai.  It becomes quickly apparent that the 4.Ai has some issues with the midrange and treble, though the 4.Ai's bass presence helps it quite a bit 
The UE 900 was a pair of headphones that was a little difficult to categorieze in terms of overall signature.  It had a strong, sub-bass and nearly linear bass response with a strong midrange presence.  Though it wasn't perfect there either as it lacked lushness.  It tamed the highs.  While the LUF-4C improves upon the 900's midrange and lower treble, but it can't really match the 900's bass response and smoothness in the upper treble. 
The LUF-4C has the signature that many people wanted the RE-600 to have.  Be a more neutral phone without overdoing the highs.  The 4C quickly shows that the RE-600 do indeed have subdued highs.  On the other side of things, the 600 has much better bass response while the midrange becomes a wash.  They are pretty nicely matched overall. 
The W4 is aging, but its design remains strong and still used today by Westone.  The two differ in many ways.  While the LUF offers a brighter sound, the W4 plays its roles nicely being the warm, inviting sound that does little wrong. Bass response is something that the W4 has over the 4C, though the W4 can be a little too warm at times creating a veil over the midrange, something that the 4C simply doesn't have. 
The first thing that came to mind when I heard the 4C was that it was an upgraded Primo 8.  And in many ways, it edges the Primo 8 out in quite a few aspects.  The bass gets a the slightest gain in thickness and presence while the treble is more detailed and less edgy.  The midrange remains a focus and very well done by both IEMs. 
If there is an anti-4C, the 232 is it.  Price similarly, they complement each other in a near perfect way.  The 232 does have slightly more linear and softer treble texturing while also having more quantity and energy.  The bass follows a similar suit.  More isn't always entirely better though, quality-wise, the treble is well matched, but the bass is a slight step ahead (if you can deal with the higher quantity).  In the midrange, they swap sides.  The 4C has brighter timbre while the 232 is more musical. 
So where does everything stand in this list?  Well, the Lear LUF-4C definitely will play very well with the top dogs around.  It's price pretty high for IEMs, but rightfully so.  It offers a sound signature that is warm over neutral.  Fans of the RE-400 will definitely want to give these a listen at some point.

*UE 900 has been said to have some build issues.  Though I haven't run into any myself.  The 4.Ai I received cuts out on the right earbud if the 2-pin connector is inserted too deep.  RE-600 has been stated to have some build issues.  Like with the 900's, I haven't run into any myself.
^4C has some slight fit issues (though not bad), it also sticks out a little more (doesn't sit flush).  The W4R has some fit issues and the sound is extremely sensitive to fit.  The Primo 8's seal is either hit or miss and finicky.

All products compared are review samples!  This also ensures a level playing field when it comes to bias.

​A note about the measurements.  Room EQ Wizard (REW) was used to make the measurements.  The device used to measure is a DIY design that has been compensated to match Rin's setup (it's quite accurate in doing so, though not perfect) and gets near what Tyll measures (my setup will have a slight decrease around the 1-2 kHz region in contrast to what Tyll measures).  Additionally, due to the DIY nature of the design, there are some resonances in the bass regions (and lower midrange), the most evident one is at the 90 Hz resonance, so any spike you see there should not be there (resonances cannot be compensated for due to their nature).
In the comparison graphs, the raw data is not shown.  The grey data in the LUF-4C (only) graph is the raws for the L and R.  All IEMs were measured 3 times on their respective housings (L or R) and those averaged to get the final measurement which was then compensated (to match standard DF).
Signed,

Tinyman392
PS: Be nice to noobs, we were all noobs at one point in our life.
You must log in or register to reply here.