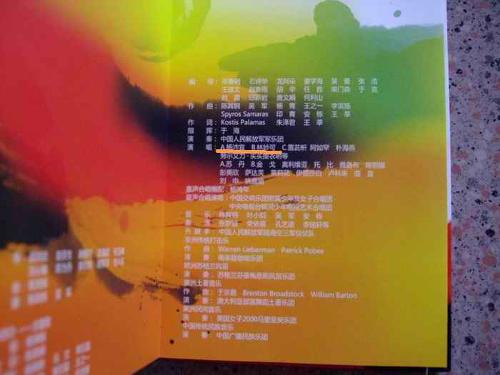 You are using an out of date browser. It may not display this or other websites correctly.
You should upgrade or use an alternative browser.
Do China lied about their gymnast age?

A heck of a lot of energy went into gathering those demi-facts and researching all of that proof whether real or not. That's a huge effort.

If only we could put that much energy into finding a cure for cancer or applying the roadmap for peace on earth.
[size=1em]Music is my recreational drug…I need a dose of it everyday![/size]

Lead paint in toys and contaminated food, etc. etc. etc. Yeah she is 14 and for what? Its not like they are neck and neck for golds with anyone. I think we have more pressing issues to engage. No Chinese amps for me.

I don't get the poll either. Obviously her real age can't be decided by a poll nor does anyone here know whether China lied or not. I'll say let IOC does its investigation.

The thing is, if you look at China female diving 'dream team' (as they call them), both are really petite (so are the Japanese and Korean girls). Should we also call them unfair as well because Asian girls are smaller than European of the same age? Obviously smaller body means less chance of splash when entering water. Sometime I wondered why Western countries bother to send overage girls to the competition, than realized I were mistaken because apparently they are all about the same age as the Asian girls.

The interesting thing is, U.S. media used to use total gold medal count in all the previous Olympic (that I can remember of) to list down the countries ranking, but now they use total medal count instead. Who could say there isn't a bit of sour grape mentality in it? There are quite a few countries entered the woman gymnastic final, why do I saw more U.S. media concern about the age of the Chinese girls than any other countries? If any of the participating countries has a problem / question, than they should let their governing official deal with IOC directly, not the media.
My Random DIY Build Thread
Simple Graphical Guide on SE vs. Bal Audio w/ Headphones
@EarbudsParadise
Etymotic ER4S/SR for reference and analytical; Elecom EHP-SH1000 for fun and dynamic; Sen-fer MT-100 for everything in-between; Earbuds when no need for noise isolation. Sony WF-1000XM4 for maximum portability.

What does the original topic have to do with Chinese amps.

Without getting political, it's hard for me to read anything into that, other than an alleged boycott of Chinese products for you.
[size=1em]Music is my recreational drug…I need a dose of it everyday![/size]

The IOC has launched an official probe into the matter.

Apart from the hacker blog post, this article here in the Huffington Post is also quite conclusive.

Wow, I just checked out the bio pages for the chinese 10m divers. Turns out that they are even smaller in terms of height and weight than than the chinese gymnasts. Perhaps those divers are not 16 (according to their bio) either, but then again there's really no point for them to overstate their age.

every time i read this poll i think about "how is babby formed".

I read that younger children have more flexible body than their elder counterparts. If true, that alone is an unfair advantage already.
[Archive] Head-fi feedback

The way I see it, if 14 year old Chinese girls won gold medals over their older counter-parts around the world, more power to them and their abilities; but that isn't to say that that doesn't affect anyone. Other teams tried to play fair by abiding by Olympic rules and bringing in gymnast 16+ years of age. Who's to say that the other nations don't have amazingly talented 14-15 year olds who could have won gold but weren't allowed to compete because of the age limit?
Current Primary Rig: Grado SR-80 --> PA2v2 --> Sandisk Sansa Clip (8 GB)
Current Headphones: Klipsch Image X10, Grado SR-80, UE 100 Metro-fi, JVC HA-FX66, Koss PortaPro, Koss KSC-35, Koss A130

There are almost 200 government funded Olympic class sport schools in China, each comes with complete facilities from swimming pool to stadium, hostel, and medical facility. With thousands (and some up to ten of thousands) of students in each school attending all kind of sports in the strictest of training method, I don't think turning out Olympic class athletes is actually that difficult for the Chinese.

There is an interview of a Japanese table tennis player who spent 3 months in a Chinese sport schools preparing for the Olympic. He told the reporter that it was the toughest training of his life and he lose almost 7 Kg in the first month, and he only had one day to rest every week. Beat that.
My Random DIY Build Thread
Simple Graphical Guide on SE vs. Bal Audio w/ Headphones
@EarbudsParadise
Etymotic ER4S/SR for reference and analytical; Elecom EHP-SH1000 for fun and dynamic; Sen-fer MT-100 for everything in-between; Earbuds when no need for noise isolation. Sony WF-1000XM4 for maximum portability.

I'm not sure if anyone mentioned the advantage of flexibility and/or size with a younger gymnast. If trained properly, a 13-14 year-old could capitalize on these advantages to seize high scores. These athletes are phenomenal and at this level the difference between winning and loosing is no more the width of rice paper.

If they are going to strip former medalists and jail them for violating Olympic rules, then it is logical to enforce whatever measures needed against China's alleged wrongdoings. As someone already stated, rules are meant to be broken.........; wait, I meant rules are rules.

This represents Singaporean punishment for any rule violations.

So it's true then (that younger children have more flexible bodies)?
[Archive] Head-fi feedback

To be fair to Singaporean, most S.E.Asia countries carry the same punishment as well. The only difference is, only Singapore dare to use it on a law breaking American while other only have the courage to use it on their own people.
My Random DIY Build Thread
Simple Graphical Guide on SE vs. Bal Audio w/ Headphones
@EarbudsParadise
Etymotic ER4S/SR for reference and analytical; Elecom EHP-SH1000 for fun and dynamic; Sen-fer MT-100 for everything in-between; Earbuds when no need for noise isolation. Sony WF-1000XM4 for maximum portability.

Mad respect to the true enforcement in Singapore. Used to hear a few stories of students on the education abroad program breaking the rules.

As others have said, countries who have followed the rule for the age limimt, may have passed on the chance to use a better competitor. It's unfair for China to do the same. And it looks even more horrible as a host country to do this. Part of me hopes their not cheating, but if they are, I hope it's brought to light and they're reprimanded sternly to set an example. Really sucks that there seems to be some shady stuff going on so often when Asia hosts events like this. Does not help the image at all in my opinion. A few less medals and a proper, no controversy, event would look much better in my opinion.
My Feedback - - - - - -
[For Now]
Foobar --> M-Audio Transit --> SF TransDAC :modded: --> ? --> ?