You are using an out of date browser. It may not display this or other websites correctly.
You should upgrade or use an alternative browser.
Dan Clark Audio Aeon 2 Noire Discussion/Impressions Thread

There's no general thread for Aeons/Aeon 2's that I could find, so I figured these should get their own thread. Please let me know if I somehow missed the thread

Starting off with a picture, I'll post my impressions soon. 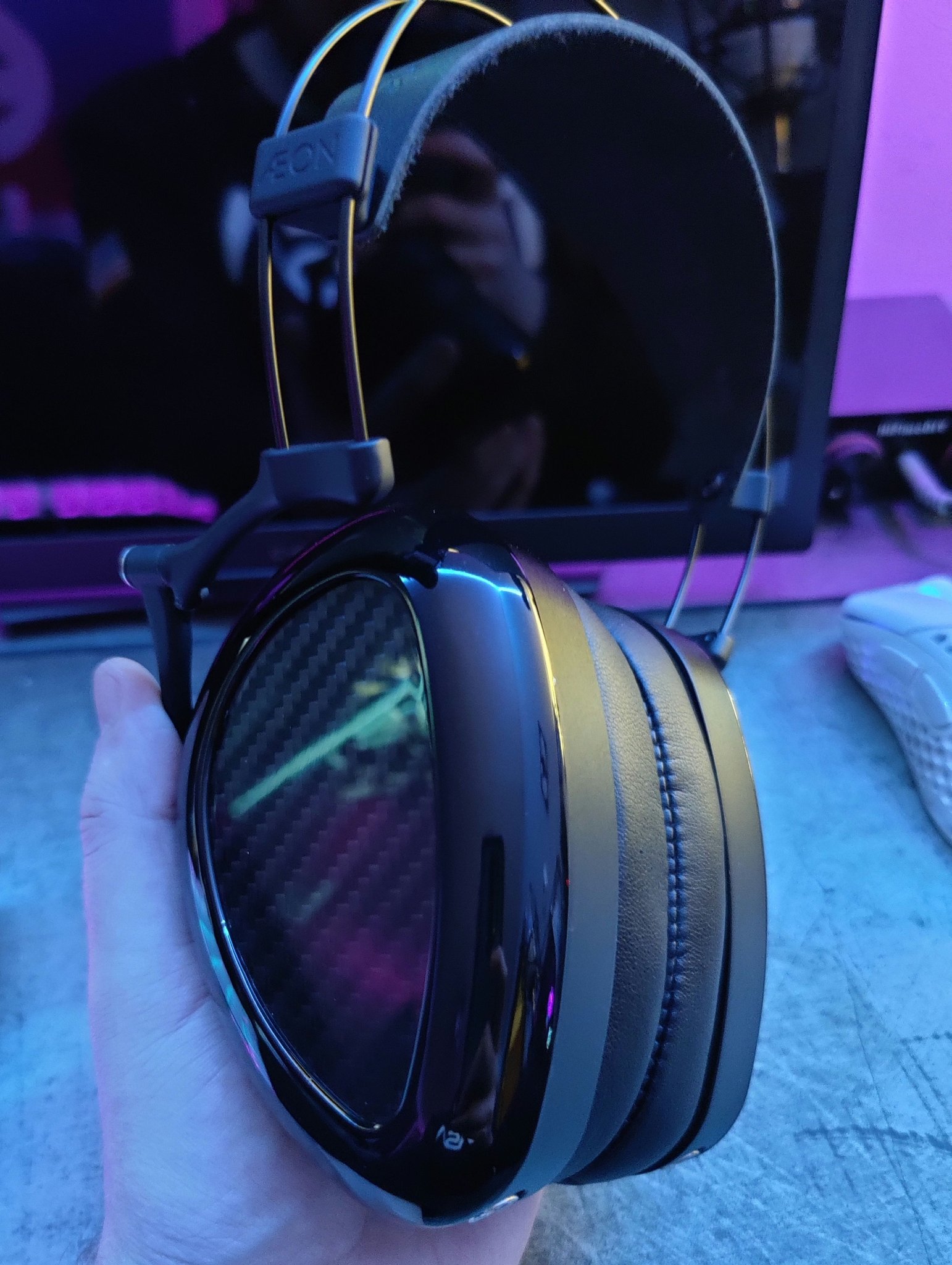 The very first thing about these headphones I noticed when putting them on is the clamp force. I'm coming from a very worn-in pair of HD650's that I also adjusted the clamp force on by bending out the metal adjustment pieces. The Noire's gave me a headache on the first day I wore them. Day 2 was very slight discomfort, day 3 they're perfectly comfortable, albeit a bit tight still.

Background/Sonic Preferences:
For the last 5 or so years, I've been primarily listening to music through my Sennheiser HD650's and a plethora of speaker setups. The HD650's fit my preferences for warm and smooth sound while not being overly veiled. Over time, I removed all filtering that the HD650's have between the drivers and my ears to help increase the treble response.

Having always been fascinated by the properties of horn loaded tweeters in speakers, I jumped on the opportunity to grab a pair of Klipsch Cornwall III's that I found for sale for <$2000 in perfect condition. Initially, I EQ'ed them to emphasize the treble less, and put a boost on the sub and mid-bass. Since getting these, I basically never listen to my HD650's, since I have great speakers and there are very few times I can't listen to them at a reasonable volume. In the past several months, I've had a growing desire for more and better treble, so I removed the treble cuts from my EQ on the Cornwalls.

TLDR: Used to like dark sound, still prefer warmth in the mids but I love sparkly and well represented treble now.

Thoughts on build/comfort/appearance:
The headphones feel and look incredible in hand. The cable is excellent quality and soft, the connector is sturdy. The packaging was simple and shockingly small. The case they come in is really compact and seems plenty tough for travel. I'd feel very comfortable tossing them in a backpack or carry on.

The comfort was an issue for me at first. The clamp force was quite high, and the height adjustment directly affects the clamp force. After a little adjusting of the headphones and time to get used to it, it's been fine. I got a headache the first day, but have had no issues since then.

Sonic Impressions:
The first thing I noticed about these headphones is they love volume. It feels like really cranking the volume benefits these headphones a lot. They sound more balanced, full and impactful when I have them turned up. This was in stark contrast to my HD650's, which felt effortless at low volume, but also didn't seem to benefit much from turning up the volume beyond a moderate listening level.

Bass:
The bass response is well-extended, albeit reserved at times. It excels at detail and depth, but falls a little flat in impact at times.

Everything in its Right Place - Radiohead: This song does a really great job to test how well bass blends into the lower mids, and reveals bass bloat. These headphones are really in their element with this song, as the synth shifting from lower mid to bass is well balanced, and and the pulsing bass throughout the song is not overbearing, like it would be on many headphones with a mid-bass hum.

Wolves - Kanye West: This song reveals the shortcomings of the magnitude of the Noire's bass. The bass notes lack some impact, and the lowest of the bass notes is a little on the quiet side.

BOOM - Tiesto: This song shows a lot of the grit that the Noire's offer in deeper bass scenarios. The impact is nice, and the texture of the notes is excellent. Songs such as this one make me suspect that a little EQing could make these headphones absolute bass monsters.

Why so Serious? - Hans Zimmer: I check this track for sub-bass extension, and I'm surprised by this headphones ability to carry the throbbing deep bass notes that occur at about 3:25.

Dani California - Red Hot Chili Peppers: I use this song to primarily hear the impact of the kick drum. The Noire's fall a bit flat, but the bass guitar stays nicely separated from kick drum and stays nicely balanced.

Mids:
This is, unsurprisingly, where the Noires falter the most. These headphones have very good bass and lots of great treble, but the mids are definitely recessed. Coming from HD650's, this was quite the adjustment. After a few days, my ears have adjusted more or less, but I still find some shortcomings in the Noire's mid-range.

Writing's on the Wall - Sam Smith: Sam's voice lacks some depth when singing in his chest/mixed voice; the undertones are not coming through as they should. His falsetto sounds just a tad unnatural as well, though I can't pinpoint the exact reason. These issues are not enormous, but definitely noticeable to me.

Lay Down - Priestess: I feel like rock music lives and dies in the mid-range, and the Noire's perform surprisingly well here. The vocals again lack a bit of depth, and the guitar is missing a bit of edge at times, but the Noire's stay clear and separated through the mid-range, despite the chaotic mix of sound and somewhat messy mastering.

Casimir Pulaski Day - Sufjan Stevens: Voices are an easy tell of mid-range neutrality, and Sufjan's voice is ingrained in my head like few others. The layered vocals - both the harmonies by Sufjan's own voice, and the choral parts near the end - are well separated and clear. However, Sufjan's voice seems a little thin, again suffering from an under-representation of undertones. The trumpet parts sound nice and separated too, separation is not a weakness of the Noire's mids, but they are a little quieter than I'd like to hear.

Your Latest Trick - Dire Straits: The separation and detail of the mid-range is again well displayed by this track, but the vocals and instruments do sound a bit thin to me at times. Particularly, the saxophone is a little bit too far in the background.

No Quarter - Led Zeppelin: This song is really only here to test the buzzing guitar starting around 1:00. The mid-range's recessed nature definitely leaves this part to fall a bit flat.

715 Creeks - Bon Iver: As I'm sure you've noticed, separation is a strong point of the Noire's, and the bare, layered, Vocoded vocals are an extraordinary test of this. The full mixing of this track has me forgetting that the mids are recessed on these headphones at all. The very deepest Vocoder parts reach into the mid-bass without any muddying or imbalance.

If the Stars Were Mine - Melody Gardot: This track proves that a warmly mixed track helps alleviate the Noire's balance issues. Melody's vocals sound completely natural, and the guitar sits nicely off to the side without falling into the background.

Instant Crush - Daft Punk ft. Julian Casablancas: While the instrumentation of this track is mixed warm and smooth, Julian's vocals are given less of that treatment. In the quieter verses, his vocals do come through a bit weakly (the lower mixing of the vocals in the verses acknowledged). However, in the chorus and bridge, they sound natural and strong.

25 or 6 to 4 - Chicago: Any time this song is (and many other Chicago songs are) mentioned, the mix/remaster version needs to be established. I tend to prefer the 2016 Steven Wilson Remix, as it cleans up the sound while maintaining the edgy sound of the mids/brass. With this version, the Noire's are a little lacking in some of the ear-tingling qualities this brass. The trombone slides do tickle my ears just a bit, but not as much as some of my favorite equipment. The vocals do sound a bit thinner than one should expect as well. However, as usual, the separation and detail is impeccable.

Treble:
These headphones do have some weaknesses, but none of them are the treble. The highs on this headphone are clean and completely without graininess. The treble takes the forward position on these headphones, but without ever sounding harsh or significantly fatiguing (unless paired with unreasonably loud volume). The detail is impeccable, and the treble response feels fast and nimble overall.

Cellophane - Sia: The vocal track in this song was recorded a bit hot, which leads to some really pleasant roughness in the louder parts of the song. Said roughness tingles the ears pleasantly on the Noire's.

Your Latest Trick - Dire Straits: The cymbals, clap and other high percussion sounds are exceptionally detailed and crisp. These headphones present them effortlessly and without a hint of graininess or harshness.

Dani California - Red Hot Chili Peppers: The cymbals and snare hit at the beginning are strong and clean, again without any harshness.

Casimir Pulaski Day - Sufjan Stevens: This song is full of subtle natural sounds that really showcase the Noire's treble performance. The slight misalignment of some of the layered vocals shows the detail present by quickly and distinctly representing the consonant sounds of each layer. The string sounds, plucks, slides and other impacts from playing are heard clearly.

Bird Machine - DJ Snake: This song simply shows, to no surprise, that the Noire's are able to present a variety of detailed treble sounds in close proximity without any smearing, sharpness or loss of detail.