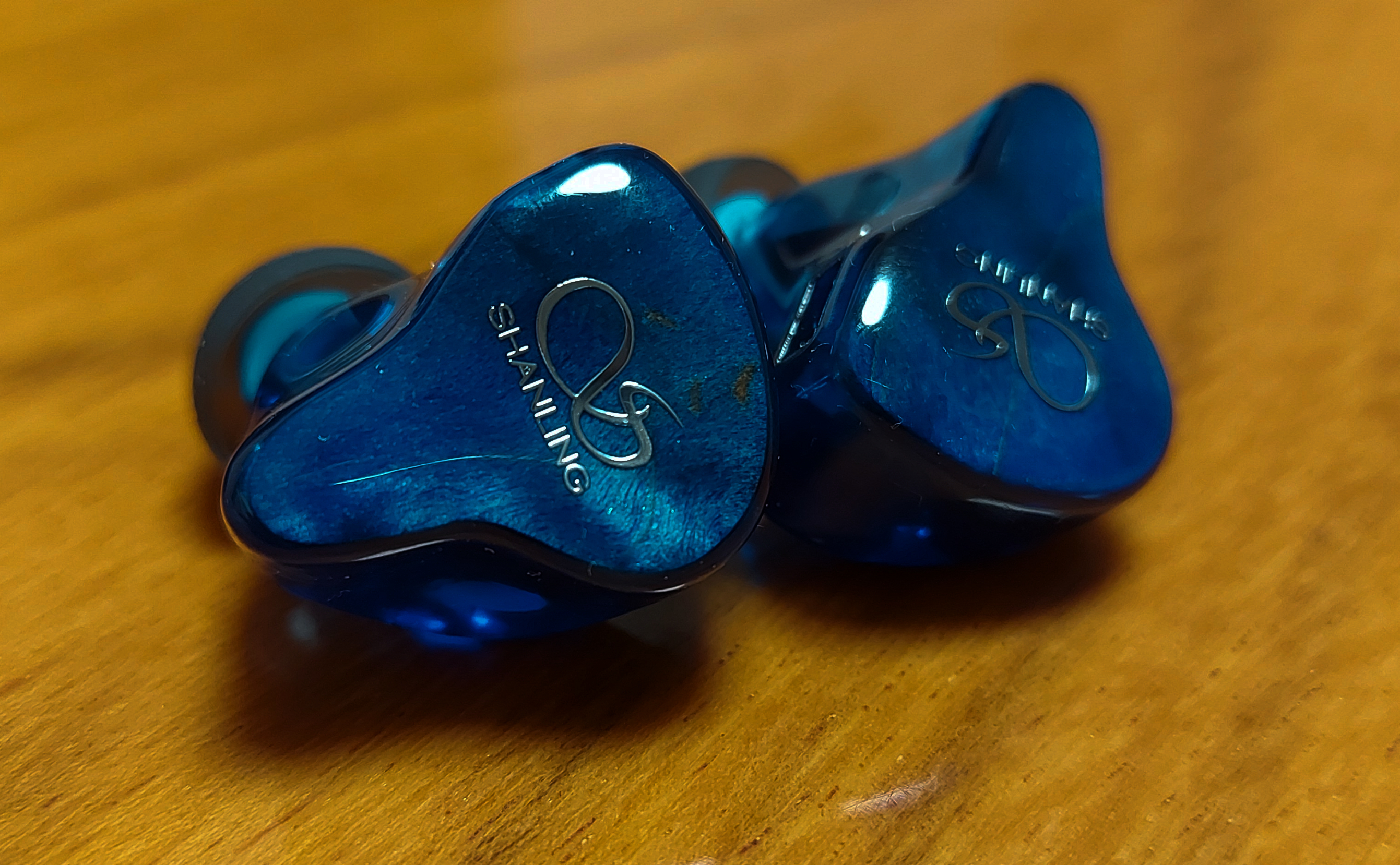 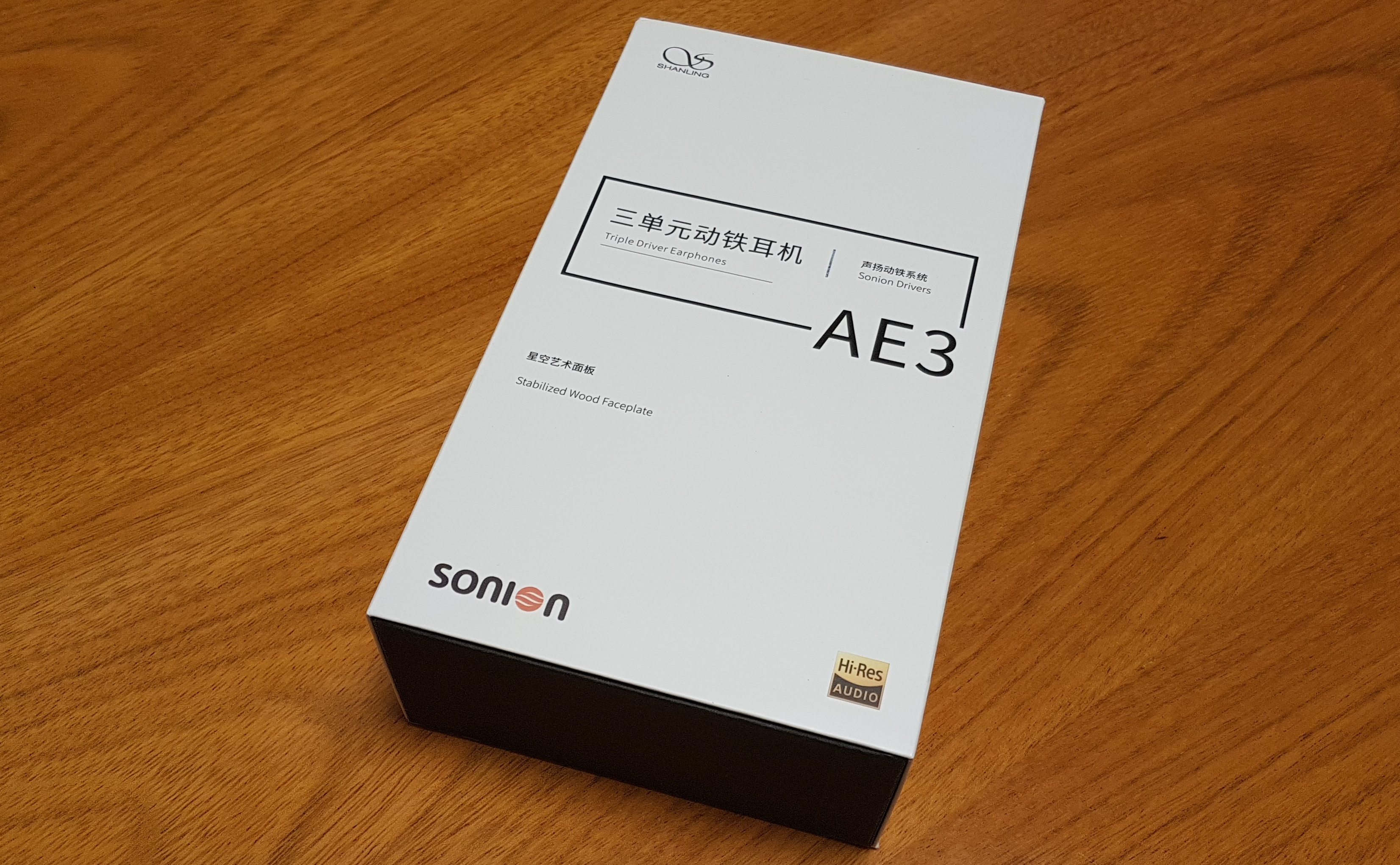 The AE3 unit here was provided directly by Shanling company. 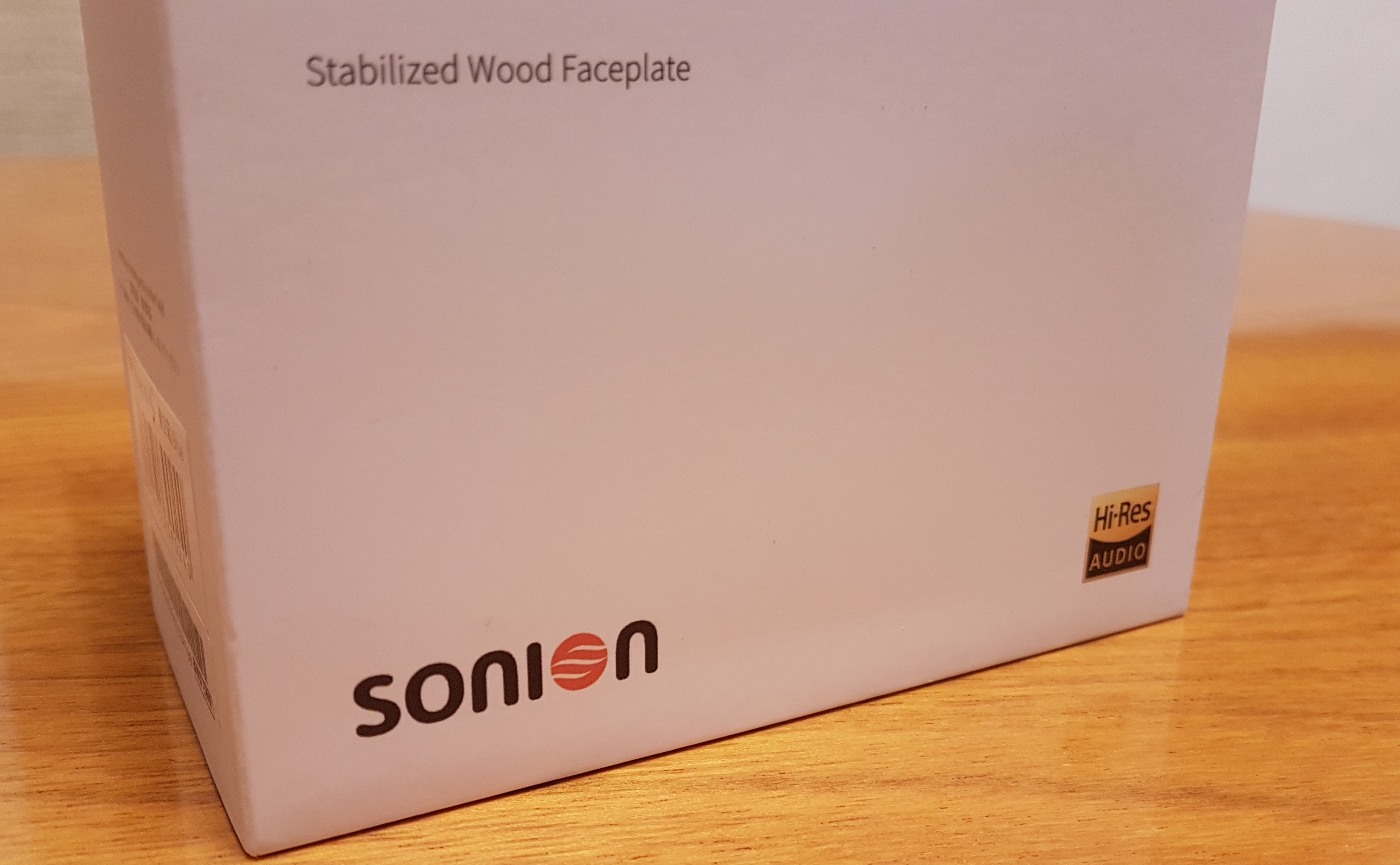 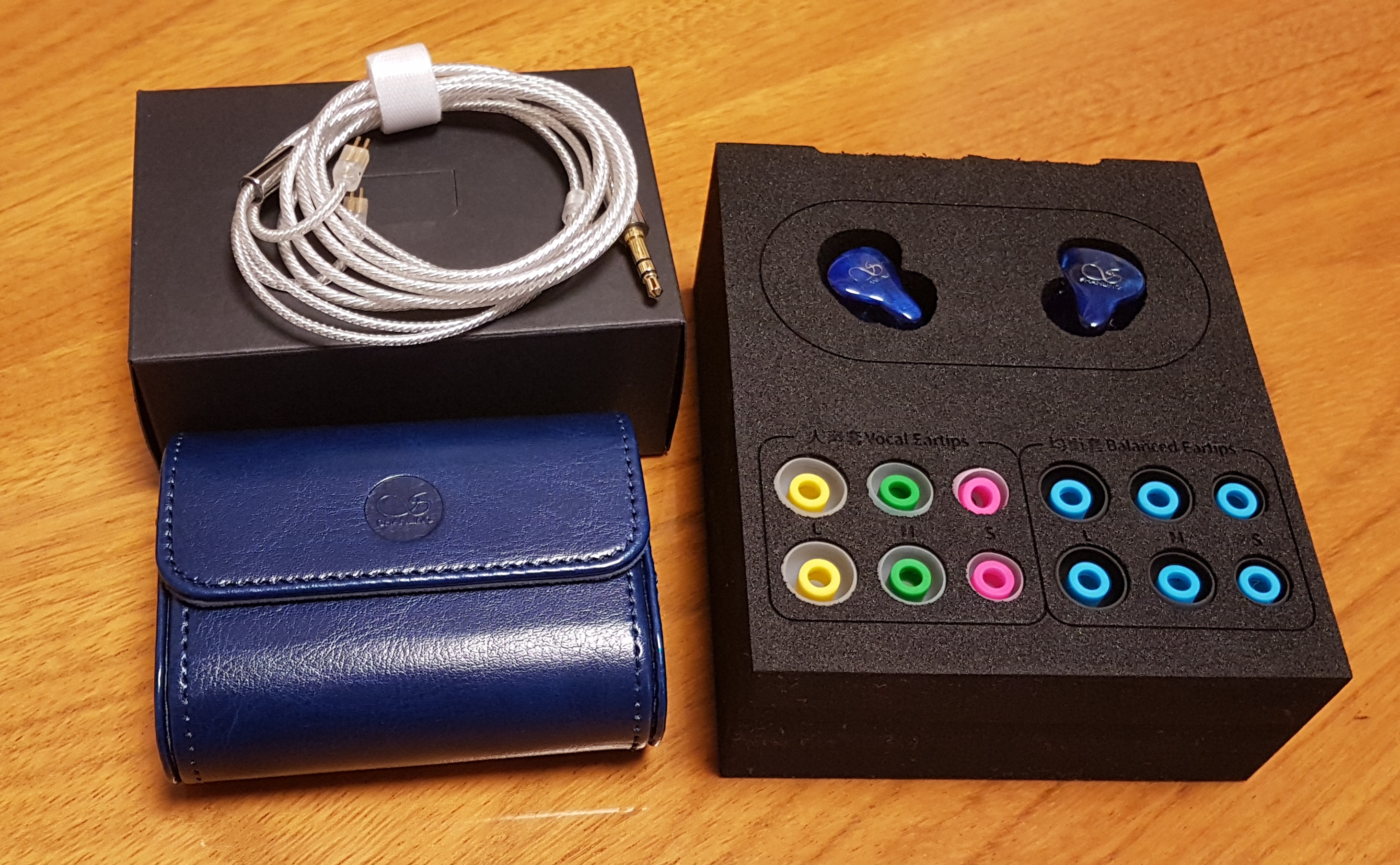 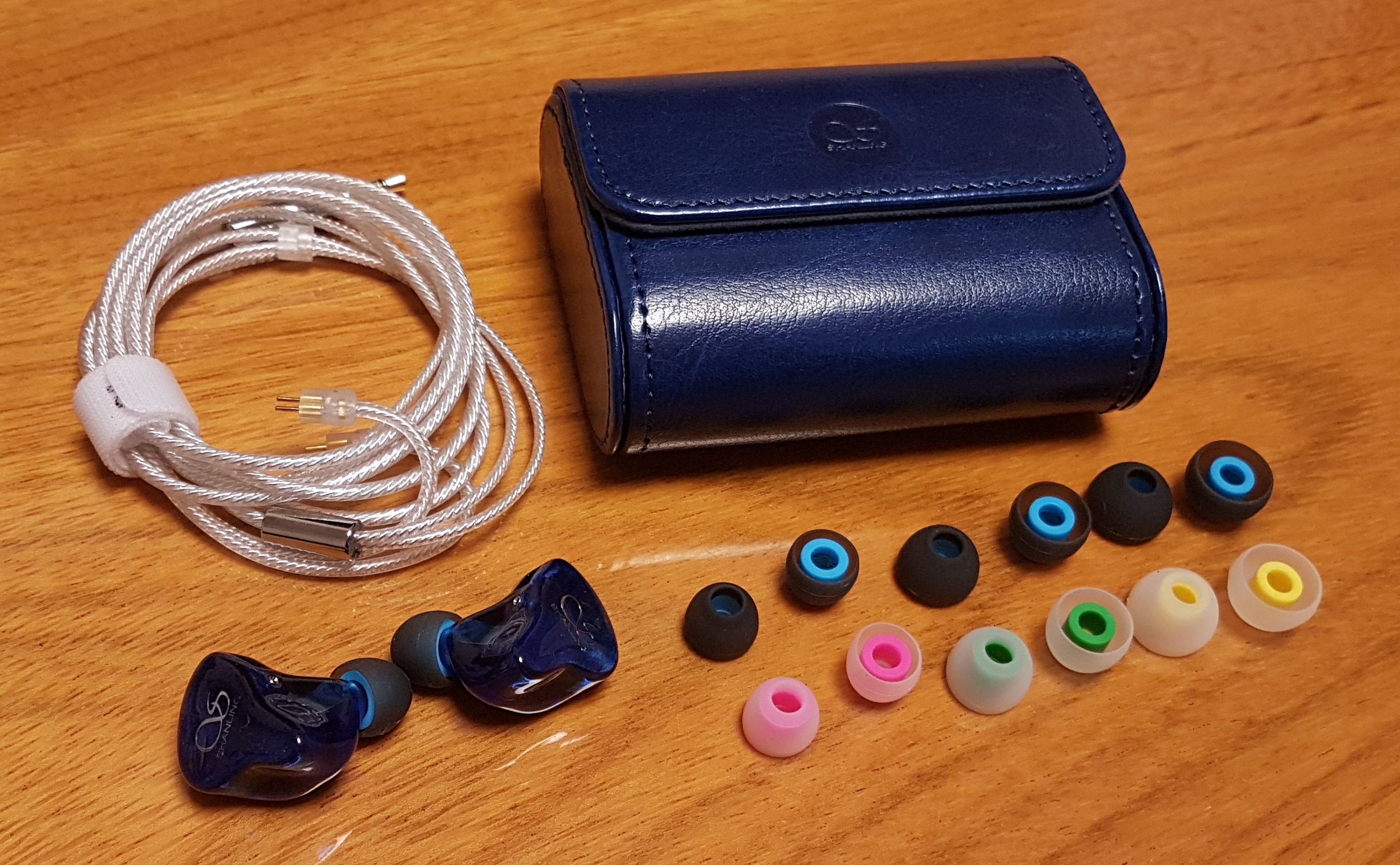 Out of the box, the AE3 strikes with its attractive design. The earpieces’ are of acrylic resin material in a shiny beautiful blue semi-transparent color and are made through the popular 3D printing tech. It is possible to see the internal components, drivers and cabling, from the inner side of the housings. The outer faceplate also features the ‘stabilized wood’ process, already introduced on other brands' in-ear models and that recently has got more attention due its elegant and unique pattern for every single piece. 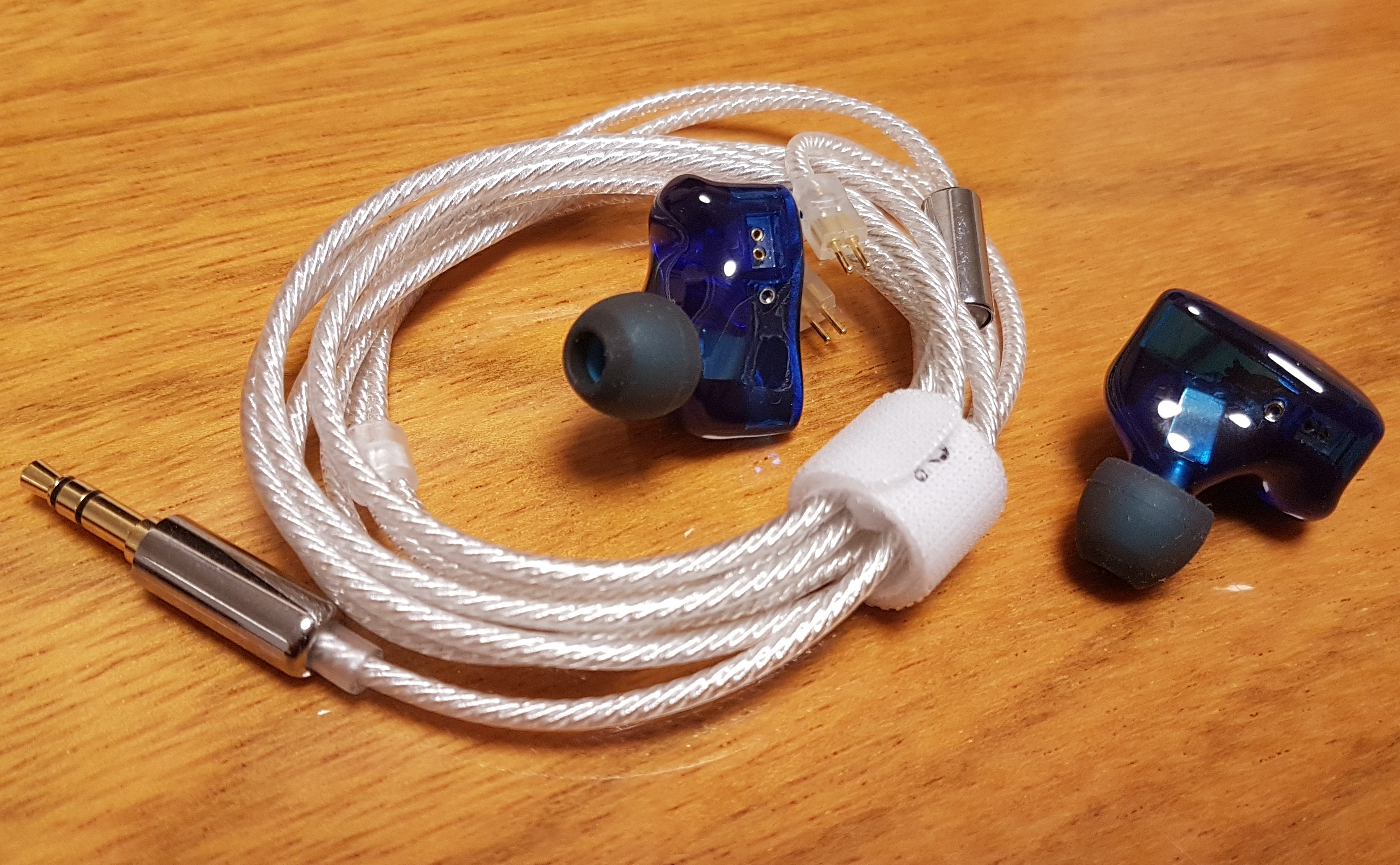 The earpieces have a fixed over-ear wearing style, and while not small with a triple BA setup inside, they prove to be fairly comfortable for everyday use at long listening time. The shape is not too different from previous models found out there but certainly is well-shaped for a more natural fit. There is a very small hole next to the 2-pin cable sockets at the upper part of the earphones, which is probably meant for the large BA vented design. Even so, the isolation level is pretty good and provides a quick and easy seal with the included ear tips. 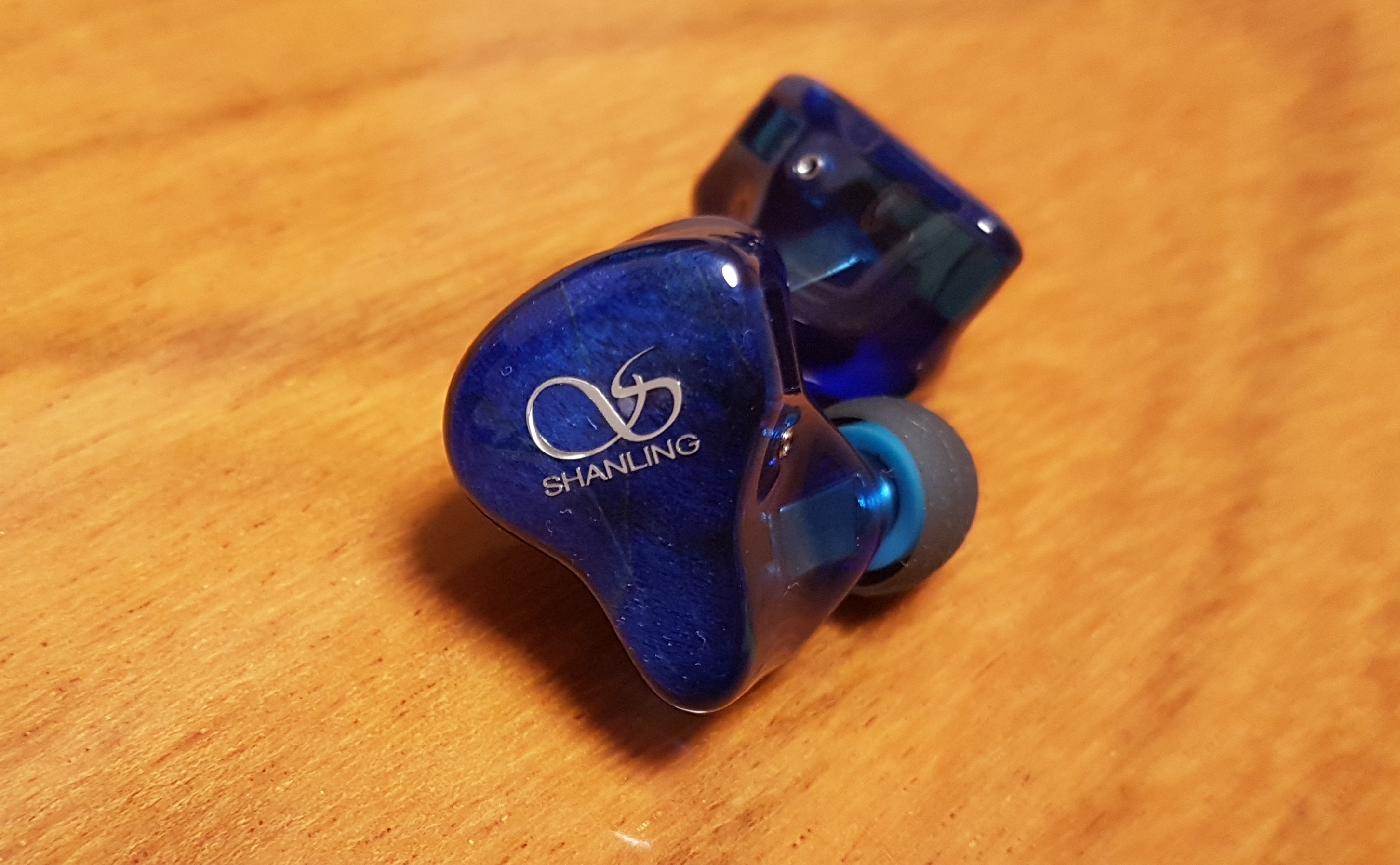 Another good point on the AE3 package is the included cable. Shanling finally switched to 2-pin (0.78) connectors and the AE3 has recessed sockets and the 2-pin plugs connect tight enough to earpieces. The cable may look less fancy than those found on other IEMs, but in reality it is of good quality – very soft and has no noise when moving around and not too thick or heavy. It is a 4 strands silver-plated copper wire all inside a soft plastic shield. If anything, the metal 3.5mm plug and y-split covers look kinda cheap, and the thin tubes installed as fixed ear guides are not really necessary. 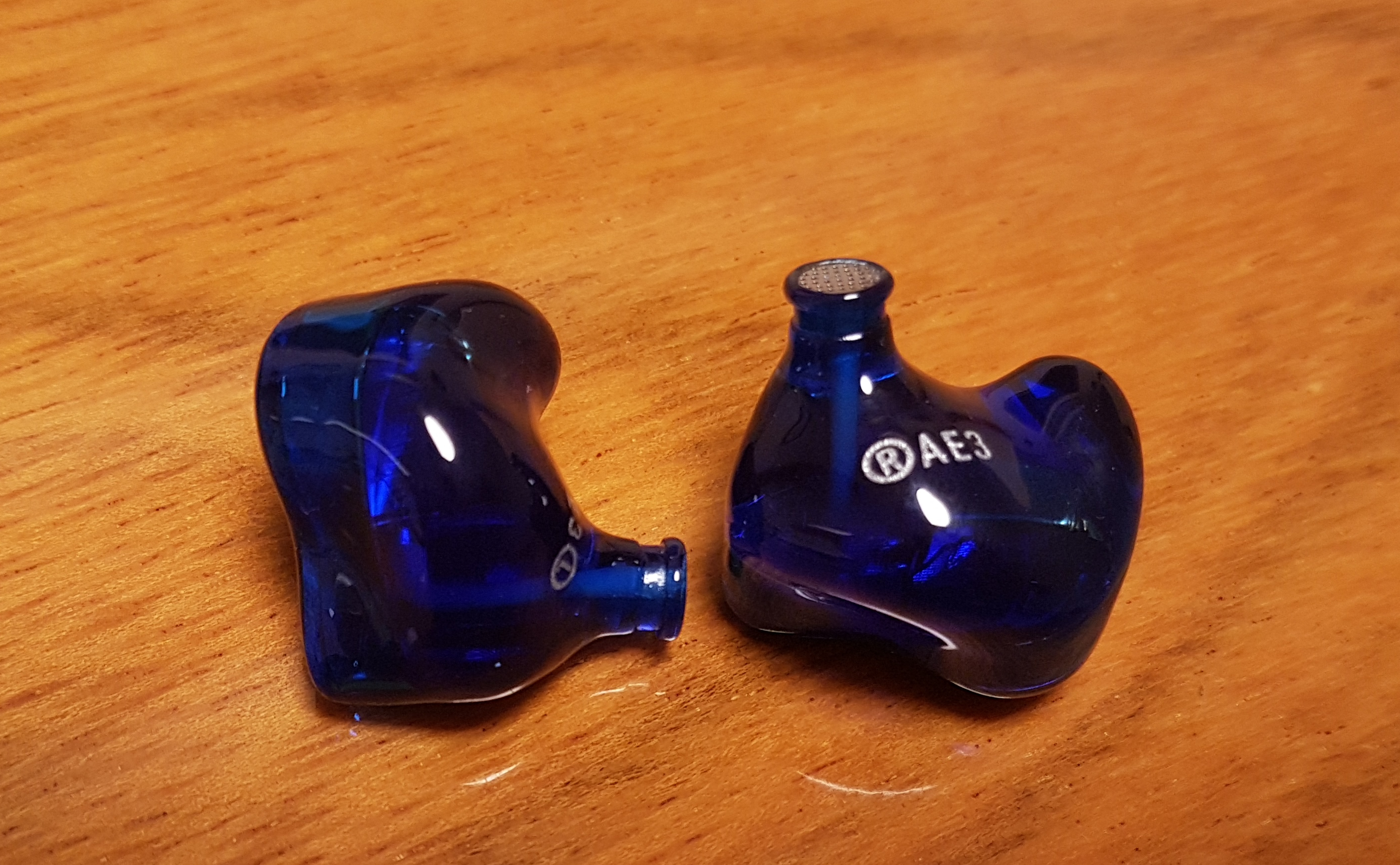 The AE3 is the first in-ear model from Shanling utilizing an all-BA drivers’ configuration, and might be starting a new earphones series. Unlike the previous BA units on the ME hybrids with Knowles, the AE3 now introduces a whole Sonion armature setup. More specifically, it is a triple BA configuration, where a large dual BA is in charge of the bass while a single BA works for mid & high freq.

Right from the start, I’d say the Sonion BA on the AE3 show different characteristics than what I’ve heard from the original Knowles so far, being less liquid and more textured, and mainly, more dynamic.
The low-end is the most distinctive part of the AE3. The BA driver is large, and the ‘vented’ design doesn’t sound like just a marketing gimmick. The bass is enhanced, hitting with strong impact, tuned with more kick on the mid-bass and still well balanced with enough sub-bass presence. It is more the tuning itself and not the limitations of the BA here, as the extension, depth and rumble are well satisfying as any good dynamic driver can get when paired with a good sounding source. Along with this, the bass is also fast in attack and has a very natural decay.

The midrange shares the same warmth and fullness of the low-end. It is articulated but less liquid than previous BA based IEMs and thus more textured and dynamic. It is thicker and more weighted on the lower-mids, giving more body and texture to male vocals and instruments in that region, but as a result misses some layering and resolution. The whole midrange is usually more forward than neutral, sounding more intimate, less spacious. There is a pronounced elevation at the upper-mids/lower-treble area (around 5K), breaking the linearity and congruency of the sound response and resulting in a bit more ‘shouty’ with a kind of unnatural up-mid lift – female vocals can sound too forward and so guitars and cymbals. Fortunately, the AE3 is not prone to sound sibilant, even with the usual pickiest tracks.

The treble is a bit of a mixed bag and seems to be picky on the paired source to perform to its best. While there is enough presence up to mid-treble that complements well the rest of the sound freq., there is a sudden roll-off when reaching the upper-treble area, where it sounds shy and laid-back in that area. The extension, however, is very good. Paired with a more neutral source (e.g. PAW6000), the AE3 opens up with more air and higher level of detail. This is not an analytical, super detail-focused IEM, but the details are really good and flow naturally. The timbre is a bit off, though, but overall is forgiving. Soundstage is moderate, equal lateral and front to back distant; does not stand out in the sub $200 mark, but not too closed or intimate either. The dynamics, musicality and fun tuning are very enjoyable characteristics of the AE3. 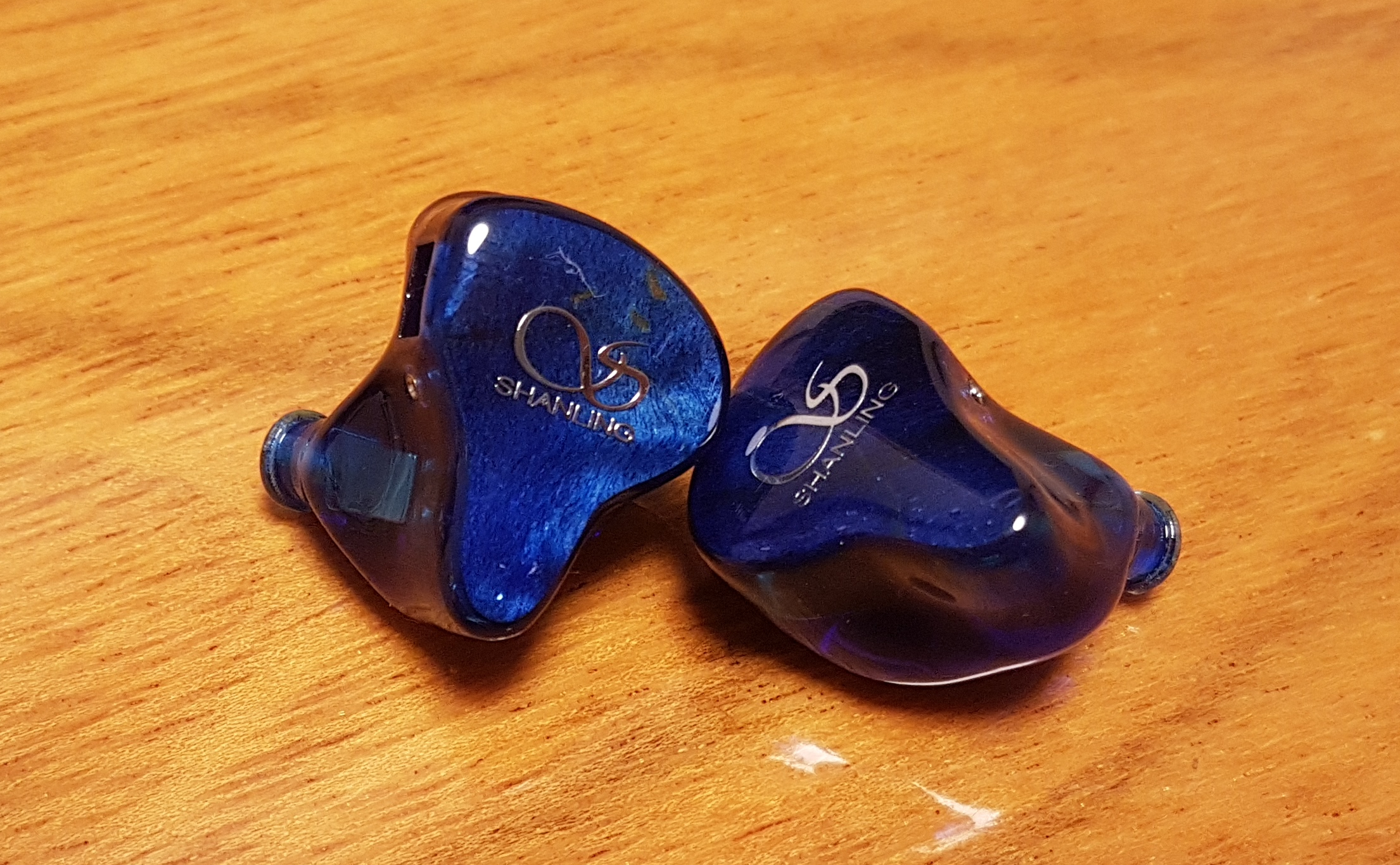 Other IEMs in pure BA setup I could be comparing the AE3 to are the Custom Art Fibae 3 and Black. The two Fibae have totally opposite signatures – the Fibae 3 is neutral-to-bright, highlights a lot of micro details, fast (and light) in bass, linear midrange with upper mid emphasis. The Fibae 3 is less suited for vocals and can be quite picky in source matching to achieve a best balance and tonality. On the contrary, the Black is very warm, dark and thick sounding with strong mid-bass emphasis and decent sub-bass but still limited in extension (not unlike any BA). The midrange is full but sound veiled, more suited for low vocals and has a very laid-back, rolled-off treble response. At a fraction of the price, the AE3 is more convincing with a more balanced and (relatively) more all-rounder signature. Greater dynamics and better layering on the low-end, more extended sub-bass and realistic response. Not as fast as the Fibae 3 but yes much better layered and clear than the Black. Midrange is forward and clear compared to the Black, not bloated or dull, and has a better texture and balance than the Fibae 3. Not as detailed, though, but not too far from it, either.

All in all, the Shanling AE3 turns out to be better than I had expected. A really nice design in blue color pattern together with wood-like faceplate finish, a very comfortable fit and, most importantly, a surprisingly good sound quality. The implementation of Sonion BA drivers is well achieved, with good dynamics, convincing solid bass presence and texture, full midrange and detailed highs with just a few caveats if going to be picky. It is not the most balanced or all-rounder sound out there, and it was not intended to be. Still, the overall presentation is very enjoyable and the AE3 holds a very good value rating.
Last edited: Feb 11, 2021
Reactions: abitstranger, Ace Bee, blowncortex and 1 other person

Ace Bee
I'm really surprised to see a comparison with FIBAE 3, as it is a very rare iem to get mentioned. I would like to know how is the stage of AE3 compared to FIBAE 3: similar width, height and depth, or more width, les depth, les height, or somewhing else? Also, I believe the airiness is markedly less on AE3 compared to FIBAE 3?

Zelda
I still consider the Fibae 3 to be a great IEM and usually used it to test new sources and compare with other earphones.
The Fibae 3 is notably airier and more open than the AE3. It doesn't have the best stage for its price, but compared to the AE3 it has more width and a little more height (for a IEM). not much depth, unless I pair it with a really good player.

Ace Bee
FIBAE 3 has more width than AE3...which automatically means I'm going to give the AE3 a pass. FIBAE 3 stage is already a bit narrow for me.

Great build and looks and shells

Quality cable included, cable rolling didn’t impact sound surprisingly.
Very efficient, can be driven from a phone or dongle to full potential, doesn’t need amp.
One of the best all around flagship iems for a phone ( no amp )that
Has flaws and isn’t perfect.( over powering low end shouty 4K at high volumes ) Competes with spring 1-2

Sounds like a subwoofer in the background. One of my best iems ( of any type ) for rap music or sub bass.

Sonion ba drivers are unlike any other ba I have heard, powerful lows organic mids and controlled treble.

Can easily be made into bass head iem with a phone ( tip choice and slight eq adjustment ) if you so choose.

liteon163
I picked up a pair of these from HiFiGo, and they're decent. The bass certainly is strong, and the treble is clear. I just wish either there was one more BA to cover the mids or there was a better crossover. Not my favorite IEMs (that would be the ER2XR), but they're good enough to stay in the rotation. I think I'll use them most often with my LG G7.