The Noble 5 was inspired largely by the demand for a universal version of the Noble 8C (eight-driver acrylic CIEM). With deep, thick layered, bass and highs that never fatigue the ear, the Noble 5 strikes a balance between fun and articulate.

Here is what Noble has to say about the 5:

I feel that the Noble 5 is perhaps the least popular in the Noble lineup, not because of its sound quality but mainly because of where it exists on the Noble spectrum. The universal monitors that Noble has in its lineup are the 3, 4, 5, 6 and the K10U. Generally speaking, the 3 is for consumers who have not quite entered the audiophile market and are curious about high-end audio. It is defined by its v-shaped response. The 4 is for budding audiophiles looking for a neutral sound. The 6 is for bass heads who want more punch in their music. The 10 is for serious audiophiles who want a monitor not for referencing but for enjoyment. The 5, being the middle child, is often neglected as it exists in a sonic limbo. 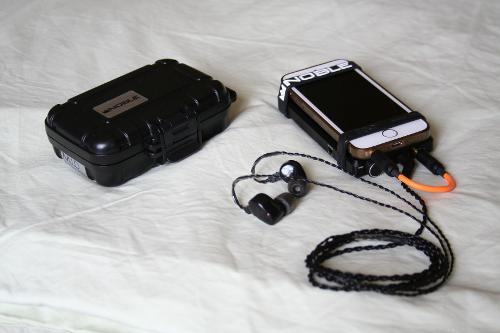 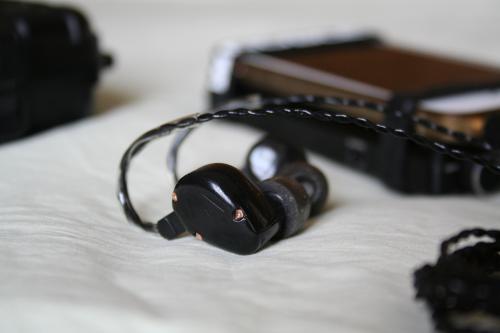 Gear
The Noble 5 is an understated looking IEM. It's a classy shade of black, with an engraved logo on the faceplate. The only embellishment in the design of the piece itself are the gold screws on the faceplate.
The form factor is plain and unassuming, but the nozzles are larger than average, which may make them uncomfortable for smaller ear canals. For instance, the Comply TX500s that I purchased have to stretch a bit to fit onto the canal.

As for accessories, the Noble 5 comes with everything you will need. Along with several different styles and sizes of tips, the package comes with two bands for holding DACs, amps, and your source together; a wax cleaner; and stickers all packaged in a nice little otterbox-style case.

The bass on the Noble 5 is very full sounding with great presence and good texture. Compared to the Noble 4, the sound of the low end is definitely punchier and more powerful. This makes these IEMs great for genres like pop, electronic, and rap. When listening to songs and tracks from artists like 2pac and Nujabes, the bass is well represented and pervasive. For other genres of music, the bass coming from these IEMs may be considered overwhelming, often bleeding into the lower mids and overpowering the sound. Although the bass is powerful, I find a heavier bass works well in public places with a lot of background noise.

Mids
I consider the mids of the IEM quite neutral sounding with an emphasis on the lower region. The sound of the mids is quite powerful and present, but despite this they remain smooth. The mids sound great for most male vocalists, low-register female vocalists, and guitar.

The treble region is the weakness of the Noble 5. Although the treble is articulate and clear, the sound can sometimes be fatiguing with female sopranos. The treble can sometimes be slightly covered by the bass and mids. The overall treble is quite far off from the silky highs of the K10s.

The overall IEM form factor is relatively small and subtle, with a protruding logo and gold screws. The monitors feel good on the ear as they are lightweight and comfortable, and only protrude slightly from the ear. The flush sockets concerned me at first, but I have had no trouble with them so far. The cable is definitely a highlight of the earphones. It is thin, flexible, and does not make any noise when you touch or bump it. I consider the Noble 5 a great daily driver.
Reactions: jesusio
Pros: - Silky sound - Great bass depth - Very good impact for BA - Amazing clarity - Wonderful build
Cons: - Less impact than top-tier Dynamics - Expensive - Fit isn't perfect for everyone - The packaging is fairly minimalist - Need amp to sound their best
[Originally posted at Basshead.Club]

Not all bassheads are alike. Some people favor clarity and beauty in sound over raw, chest-thumping bass power. People in that category should seek a Balanced Armature earphone. I reached out to Noble Audio and asked what IEM they would recommend to a basshead like me, and they were gracious enough to send me the Noble 5 to review.

While the impact of a BA-based IEM is never going to reach the levels of a Dynamic Driver, the sub-bass depth is outstanding on the Noble 5. The impact is also superior to many other earphones I’ve heard, including a fair number of Dynamic Driver-based ‘phones. The Noble 5 reaches impact levels similar to the Audio Technica ATH-CKS1000 and a bit shy of the JVC HA-FXZ200. That is, frankly, rather incredible given that it’s all BAs (5 of them!) in each earpiece, especially considering the clarity offered by the Noble 5.

There are 2 drivers (technically, they’re receivers, but everyone calls them drivers so I will too) dedicated to highs and 2 dedicated to mids coming from one bore, and 1 driver dedicated to lows coming from the other. Apparently, you can/should only put ~4 Balanced Armature drivers in a single tube, so all of Noble Audio’s IEMs are dual or triple bore.

The overall sound is smooth and silky, with a mild emphasis on bass and tuning that works well for extended listening sessions. The basshead in me can’t leave headphones to their default tuning, so I pulled out the equalizer and Cayin C5 to see what these could do. A boost in the sub-bass combined with the bass boost switch on the C5 yields true basshead-level bass, and no further tuning of the sound signature is needed to my ears.

They scoop low into layers of bass depth I didn’t know were possible with Balanced Armature earphones and ride a silken wave all the way up the spectrum. The attack of tom drums sounds  a bit emphasized, which suggests emphasis in the 5kHz range, but it drops off well shy of sibilance. I am not posting a frequency response graph with this review in part because my setup couldn’t get the best seal (the bores are more of an oval than a circle), so this is more based on subjective impressions than any real data.

As for what the Noble 5 comes with, the case is the standard hard shell I’ve been seeing from many high end IEMs lately, the eartip selection is very good (I prefer the foam tips or double flanges), and there are bands presumably to strap to audio players.

Weaknesses? The only audio-related weakness might be, for some people, that the highs could be slightly fatiguing. There is a slight edge to them, but not enough for me (and I’m sensitive to treble) to drop them with EQ. I find the frequency response to be very pleasant. Soundstage is intimate, so if you’re looking to feel like you’re in the Sydney Opera House, this might not be what you’re after. My only real criticism is that they’re a little tough to get a good, comfortable fit at first with the tips and over-ear wear. I tend to mess with them for a few minutes every time I put them on before everything feels right.

If you’re looking for a Balanced Armature-only earphone that satisfies your basshead cravings, I have heard nothing better. The competition in the high end Balanced Armature Basshead market is fairly slim, so these might stay on top of the heap for some time to come.

twister6
Would be interesting to see a comparison to W50, those Westones are also regarded as "basshead" 5 BA driver IEMs

Luckbad
@twister6 The Westone W50 is here for review as well, and will be the next review posted. Spoiler alert: The Noble 5 sound better. The Westone W50 are very dark and need EQ to sound good. They are supremely comfortable and well built, and with EQ can sound pretty amazing, but they are just too dark sounding for almost anyone (and I I typically like/am fine with veiled or dark signatures).
Read more…