Encore
Pros: same safe tuning as the Starfield but edges out its predecessor in technical performance at a lower price point, vastly better included cable
Cons: none at this price point 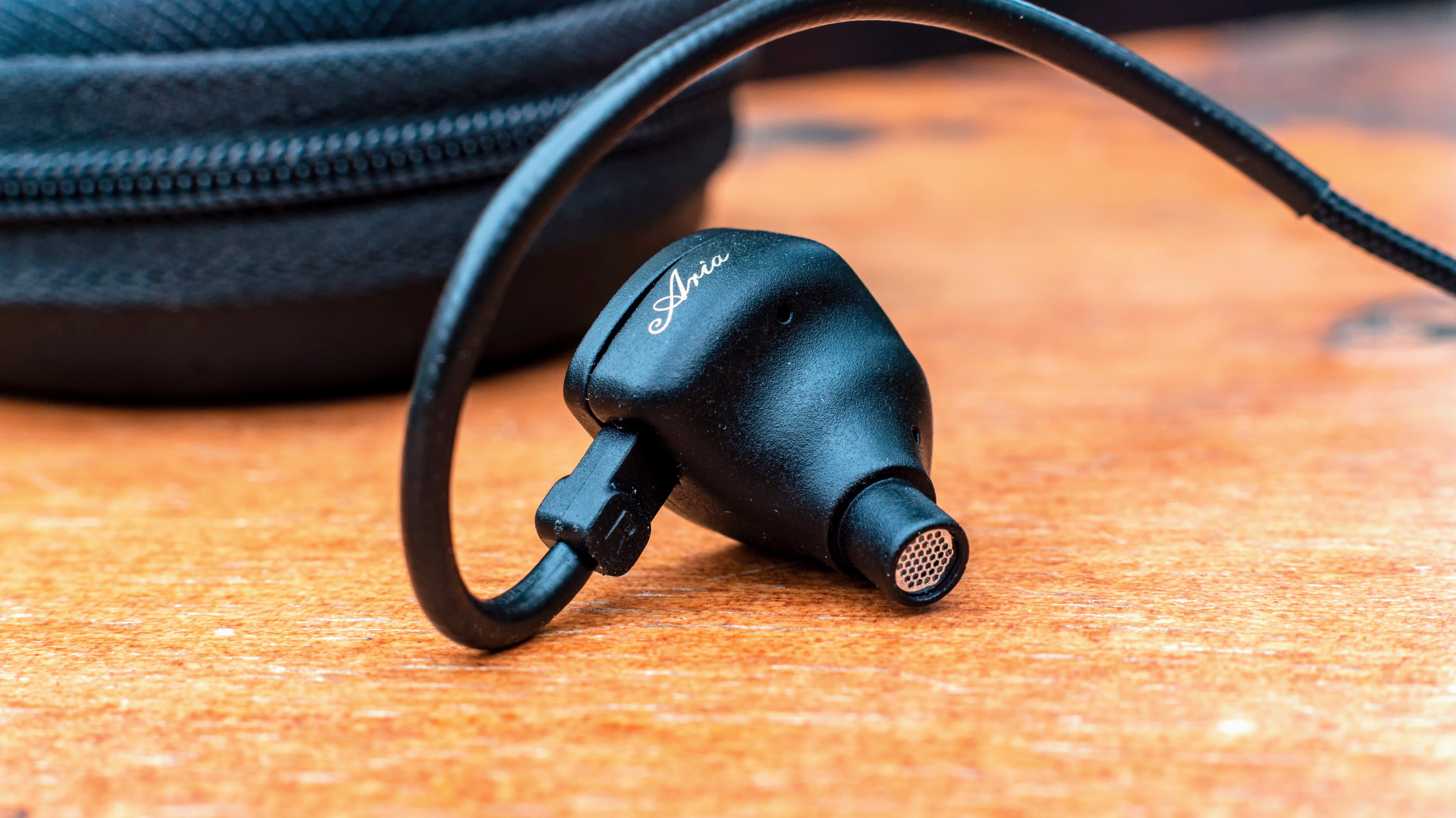 INTRODUCTION AND DISCLAIMER:
The Moondrop Aria is an in-ear monitor (IEM) featuring a 10 mm dual-cavity liquid crystal diaphragm dynamic driver. The Aria is available at ShenzhenAudio for $79.99. I received the Aria from ShenzhenAudio in exchange for a fair and objective review.

SOURCES:
I have used the Moondrop Aria with the following sources:
I have tested these headphones with local FLAC and Spotify Premium. Visit my last.fm page to get an idea of what I listen to. 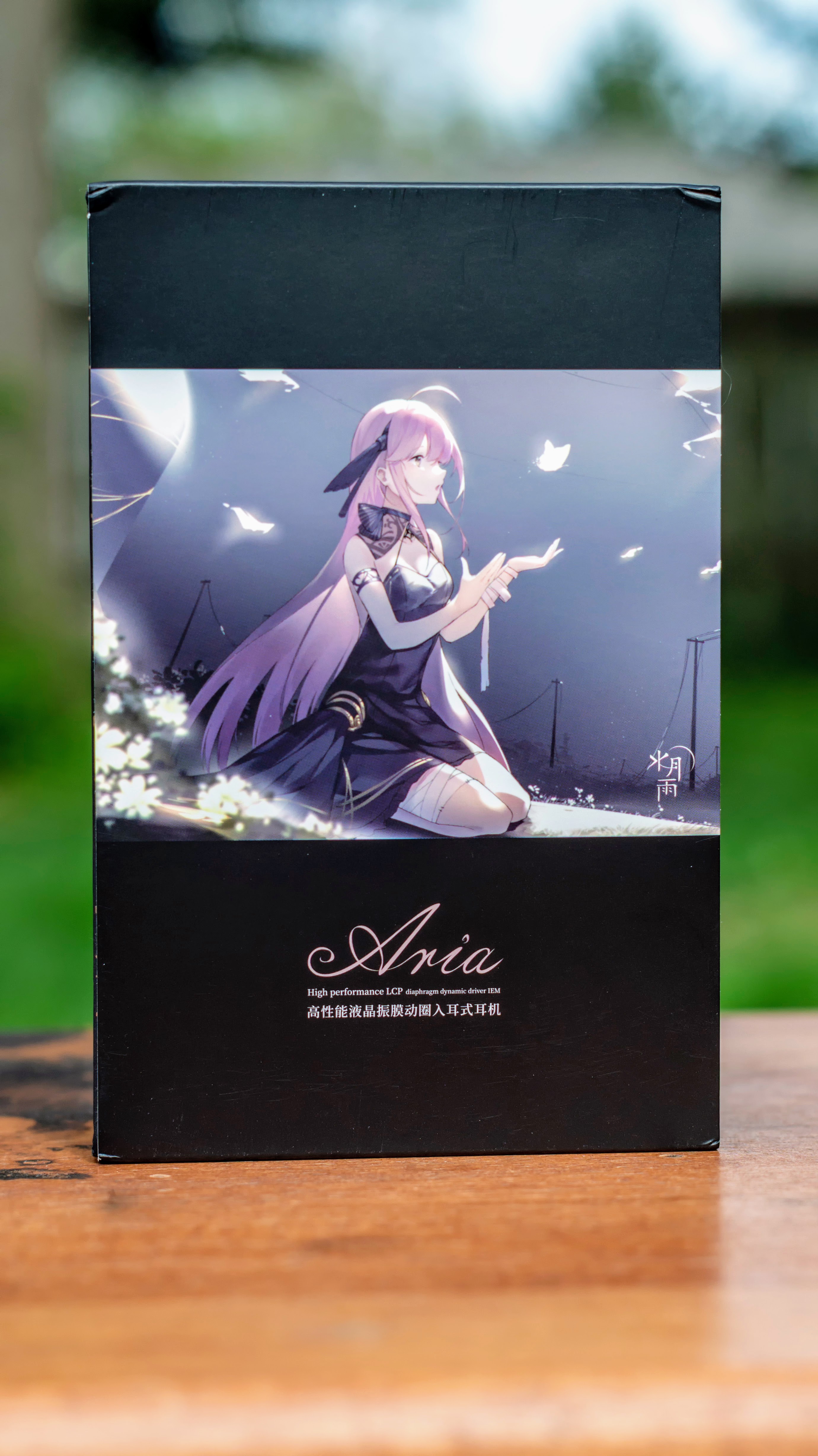 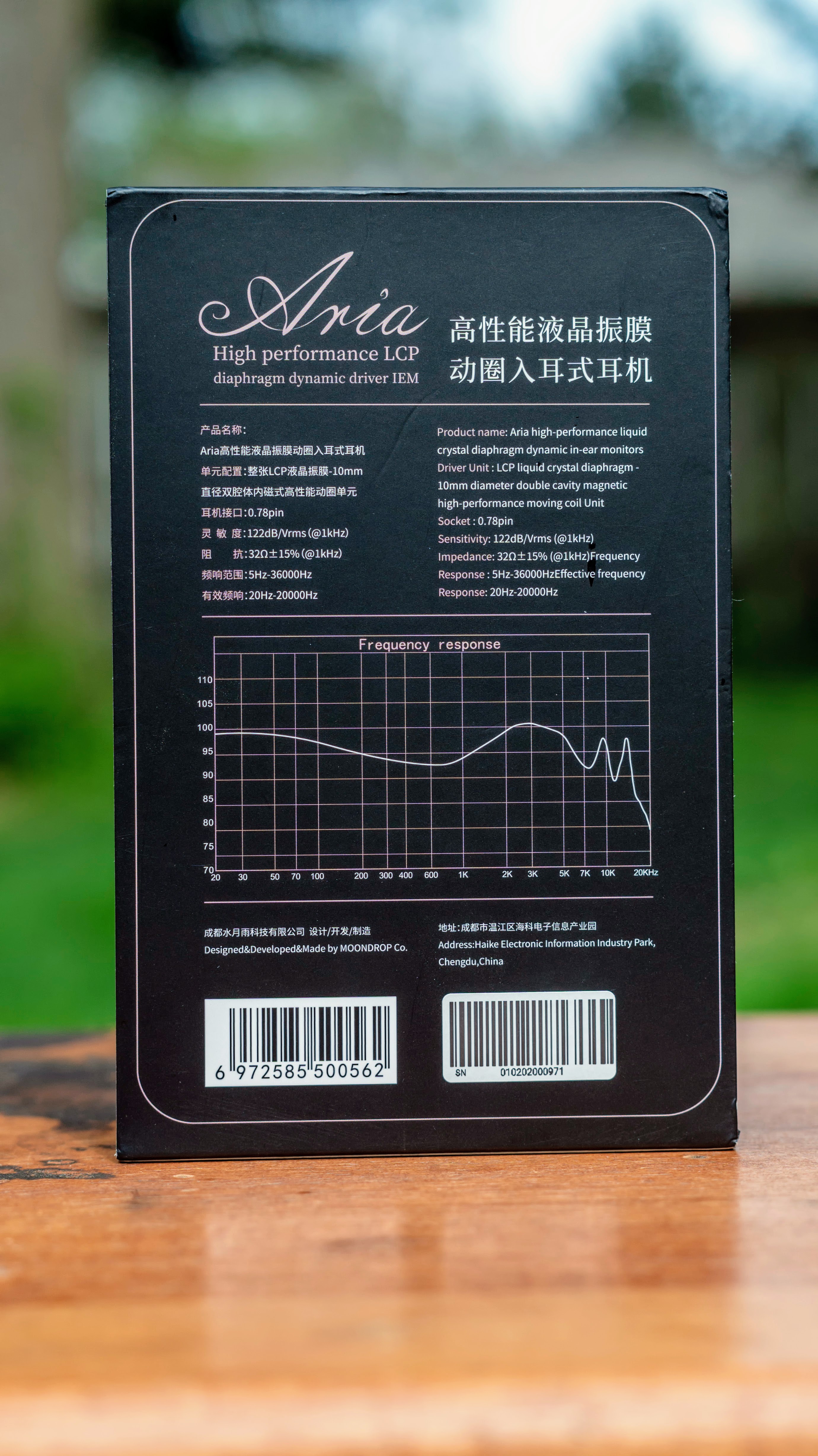 The Moondrop Aria comes in a rectangular black cardboard box with a black slipcover. The front face of the slipcover is illustrated with the Moondrop mascot. The rear face lists the Aria’s technical specifications in English and Chinese. The rear face also includes the Aria’s frequency response graph. This graph is very similar to my own measurements (shown later) and those taken by Crinacle, with some differences in the treble that are likely a result of the insertion depth each respective measurement was conducted at. This is an impressive level of transparency, particularly on a budget product, and I wish more manufacturers would follow suit. The box is printed with the name of the IEM and the Moondrop logo in rose gold filigree.
Inside the box, the IEMs and the included carry case are held in foam mounting sheets. The package includes a detachable 2-pin cable and 12 grey silicone eartips in three sizes (S, M, L). In addition to the usual documentation, a set of replacement nozzle filters and a tool to install them with are also included. 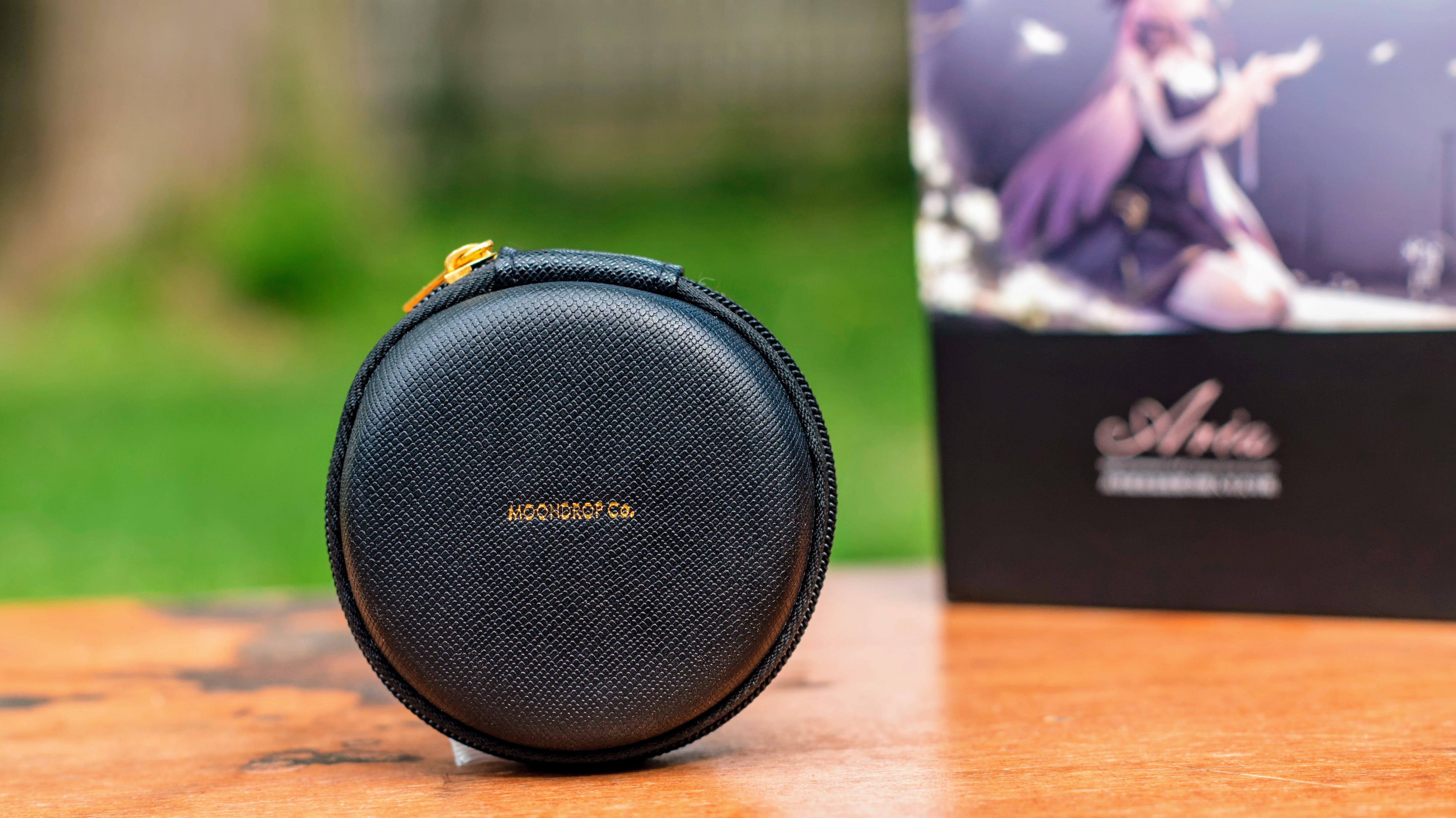 The included carry case is the same attractive and well-made Moondrop-branded semi-rigid zippered carry case included with the Moondrop Starfield. As with the Starfield and its carry case, the Aria’s carry case is a little small for its purpose and requires tight wrapping of the cable to close completely. I attempted to fit the Aria and the tiny Hidizs H2 inside the Aria’s case but was not able to close the case without deforming the Misodiko foam eartips I used with the Aria during my listening. If you use silicone eartips you may have better luck fitting a small dongle inside the case along with the Aria. 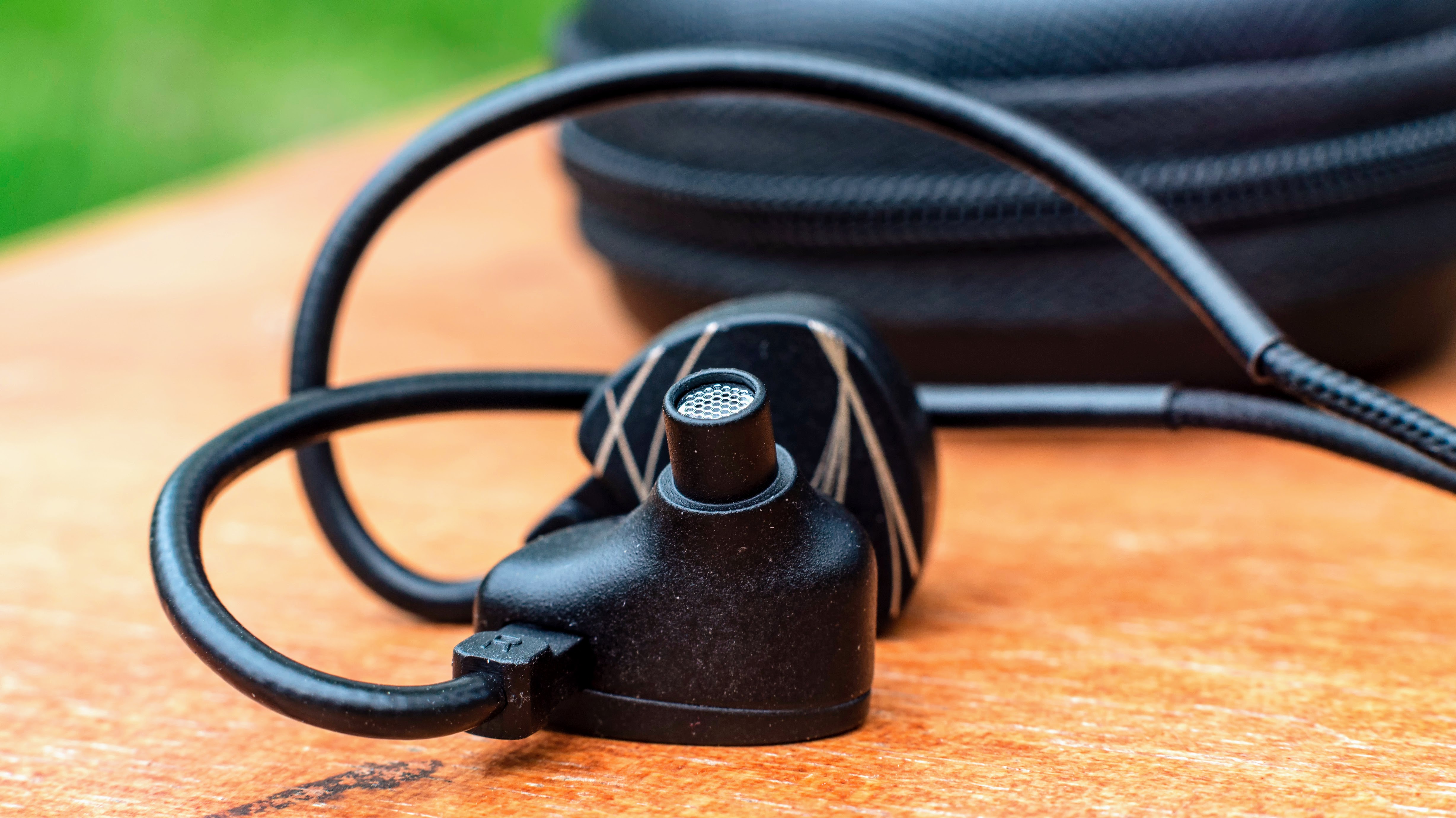 Like the Moondrop Starfield, Moondrop Illumination, and previous single dynamic driver Moondrop IEMS, the Moondrop Aria uses a two-part metal shell design. The seam between the Aria’s inner body and its faceplate is less prominent seam than the Starfield’s, but more prominent than the Illumination’s. The housings have a near-matte black finish with filigree in the same pattern and rose gold color as the packaging accents. “Aria” is printed next to the 2-pin housing on the top face of the inner shell section of both earpieces. While the Aria’s faceplates retain the overall fingernail-shaped footprint of Moondrop’s other dynamic driver IEMs, they flatten the subtly distinct sub-faces found on the Starfield’s faceplates into a single gently curved surface. The 2-pin connectors are slightly recessed. The inner face is shaped similarly to that of the Moondrop Starfield. There are two circular vents on the inner faces of the earpieces in the same places as those on the Moondrop Starfield. The nozzles have recessed mesh covers. The nozzles do not have a lip to secure eartips. 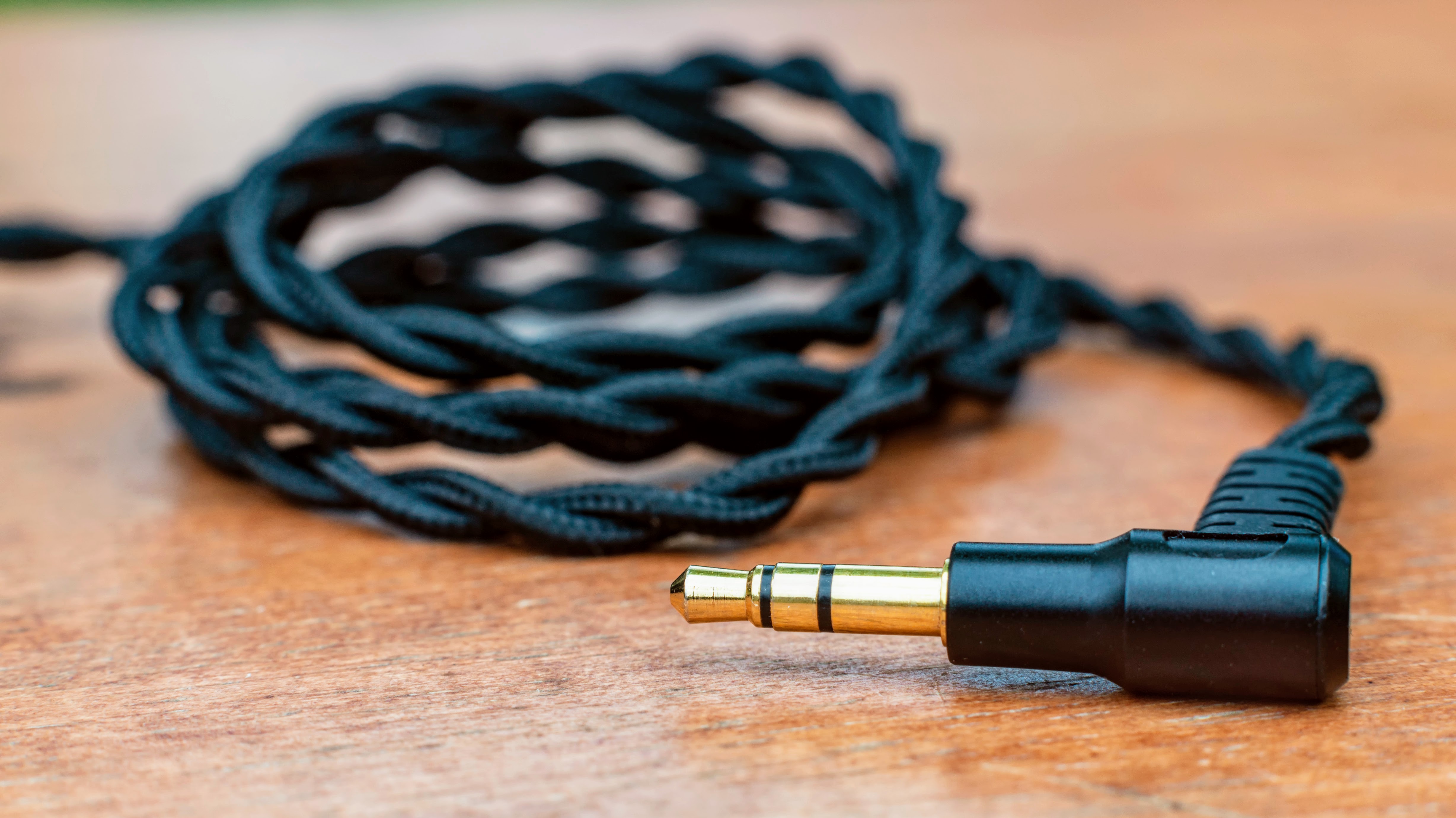 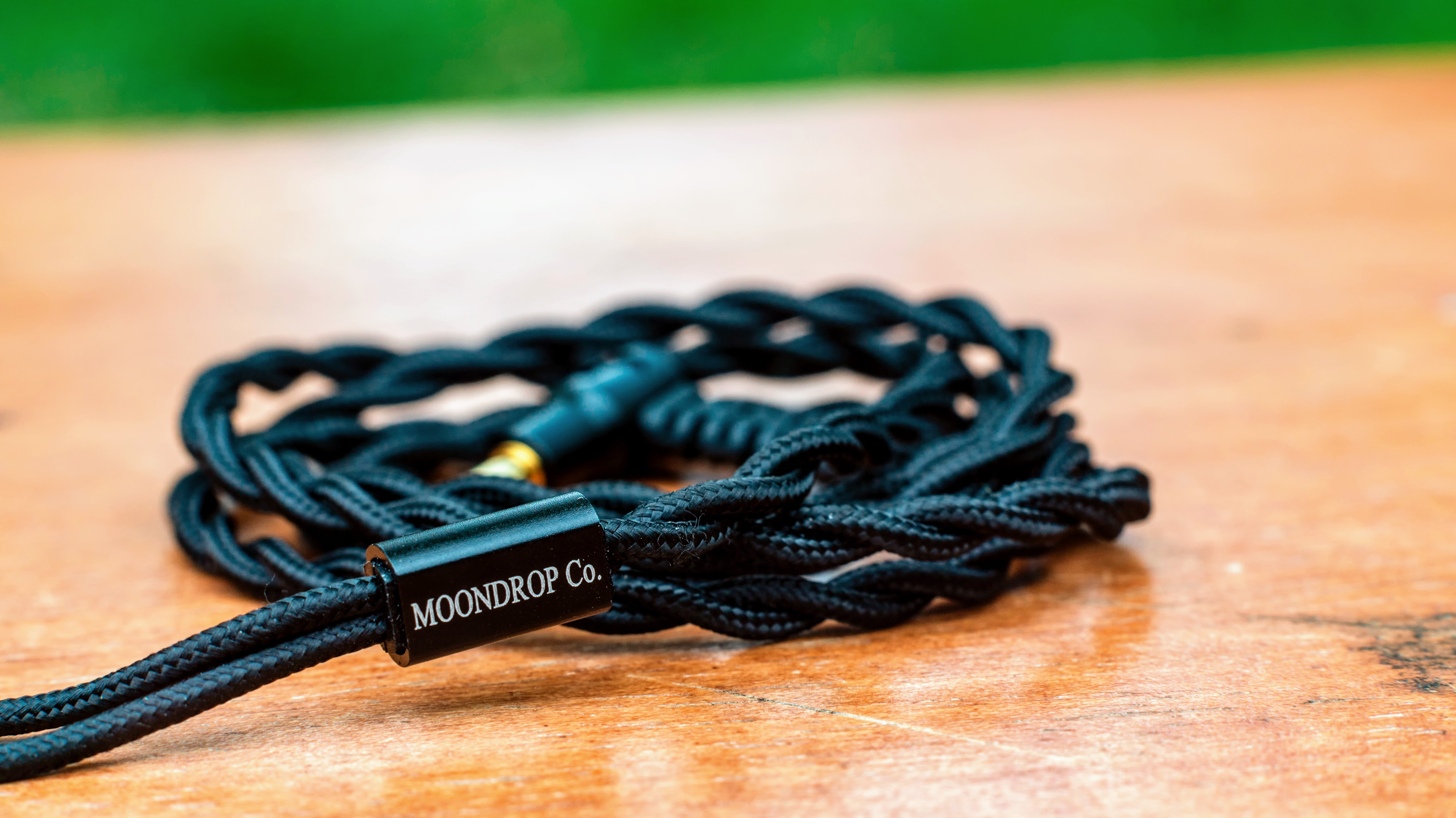 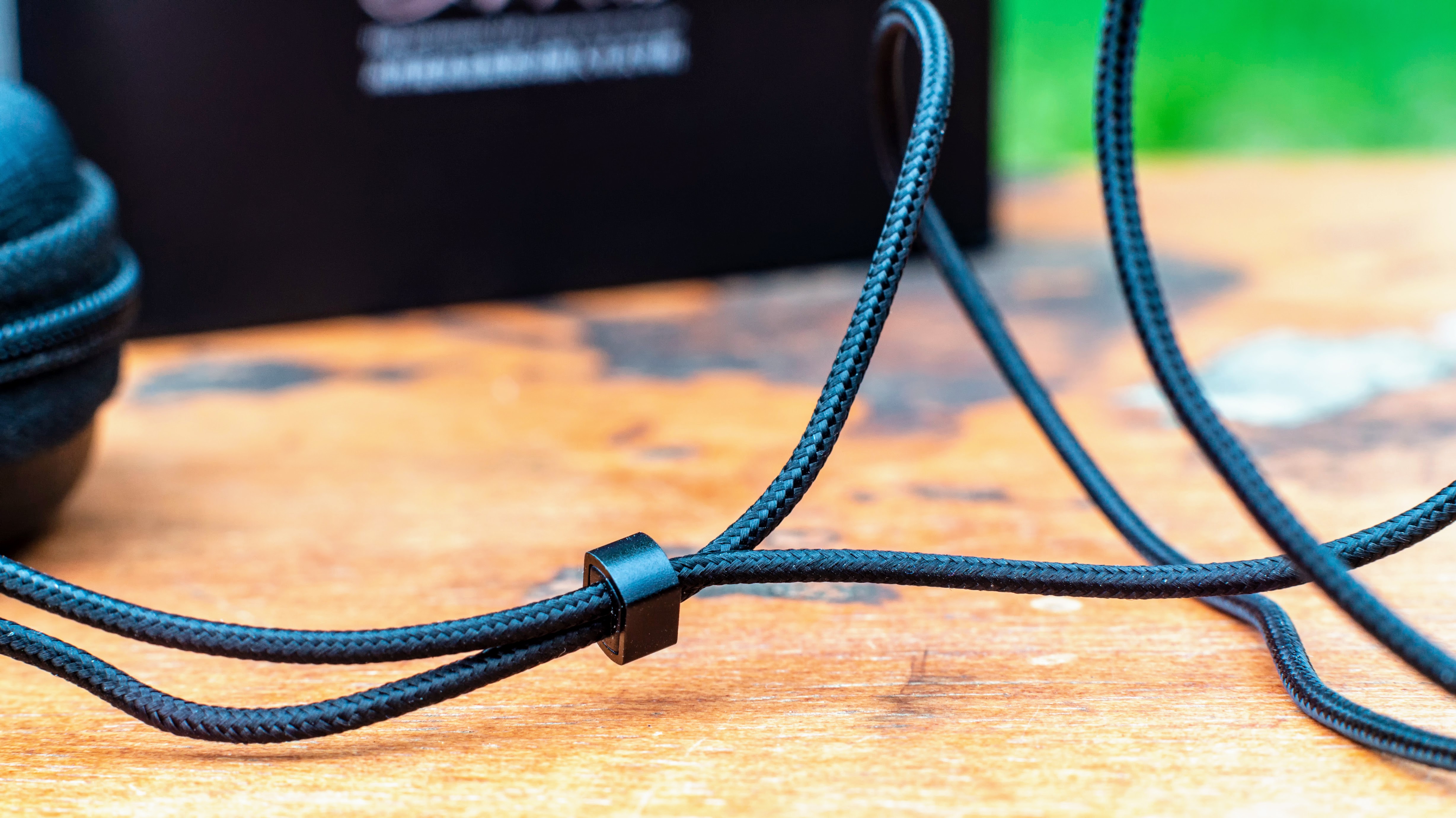 The Moondrop Aria’s 2-strand cloth-wrapped braided 2-pin cable improves on the Moondrop Starfield’s in most ways. While a tad heavier than the Starfield’s cable, the Aria’s cable is less-tangle prone and less microphonic. The 3.5mm jack is metal as opposed to the clear plastic used on the Starfield’s cable, and the strain relief above the 3.5mm jack is more robust. “MOONDROP Co.” and the unit serial number are printed in white on the metal Y-split hardware. The cable has a chin adjustment slider, which is most welcome to see. There is no strain relief at the Y-split. The cable uses preformed earguides. The minimalist 2-pin connectors have faintly raised markings to indicate left and right, which are slightly easier to distinguish than the nearly invisible markings on the Starfield’s cable. 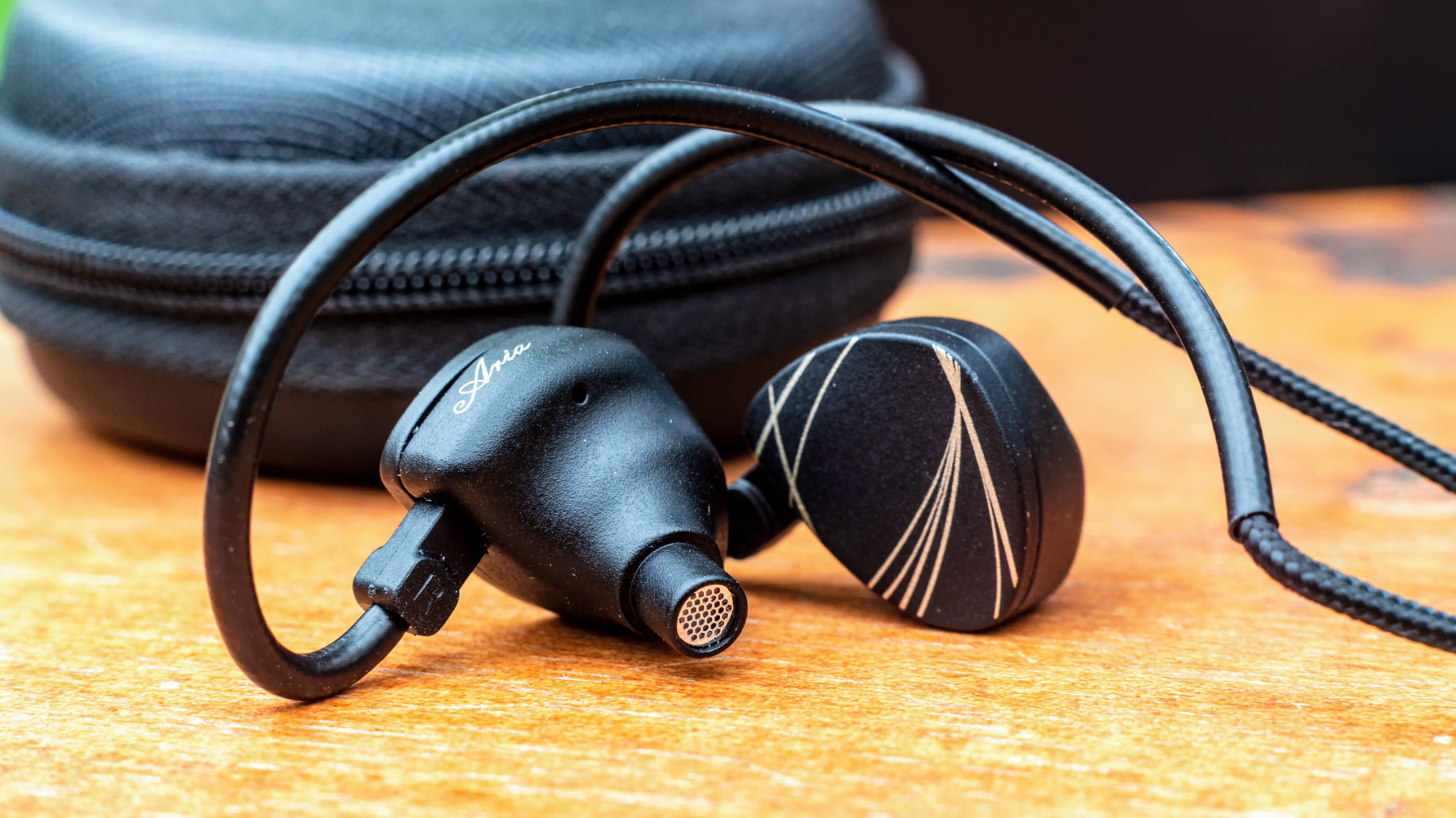 The Moondrop Aria is intended to be worn cable-up. They have a shallow insertion depth, and I found them to be extremely comfortable to wear for extended periods. I did not have issues with the housings migrating out of my ears with large-sized Misodiko foam eartips. However, given the similarity of the Aria’s shell design to that of the Moondrop Starfield, I suspect that secureness of fit would be worse with smaller eartips. Isolation is average. There is no driver flex with foam eartips. 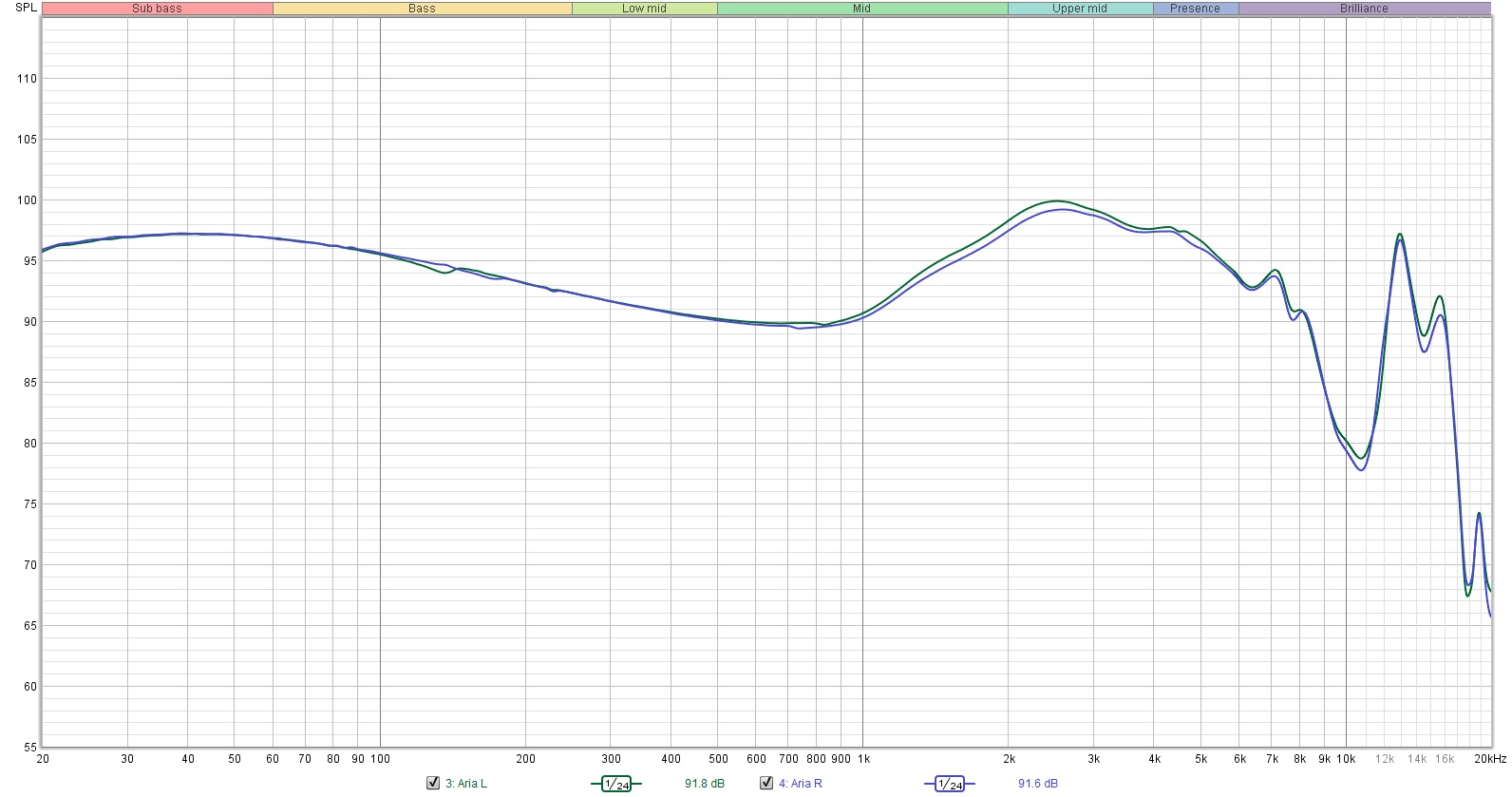 SOUND AND COMPARISON WITH MOONDROP STARFIELD: 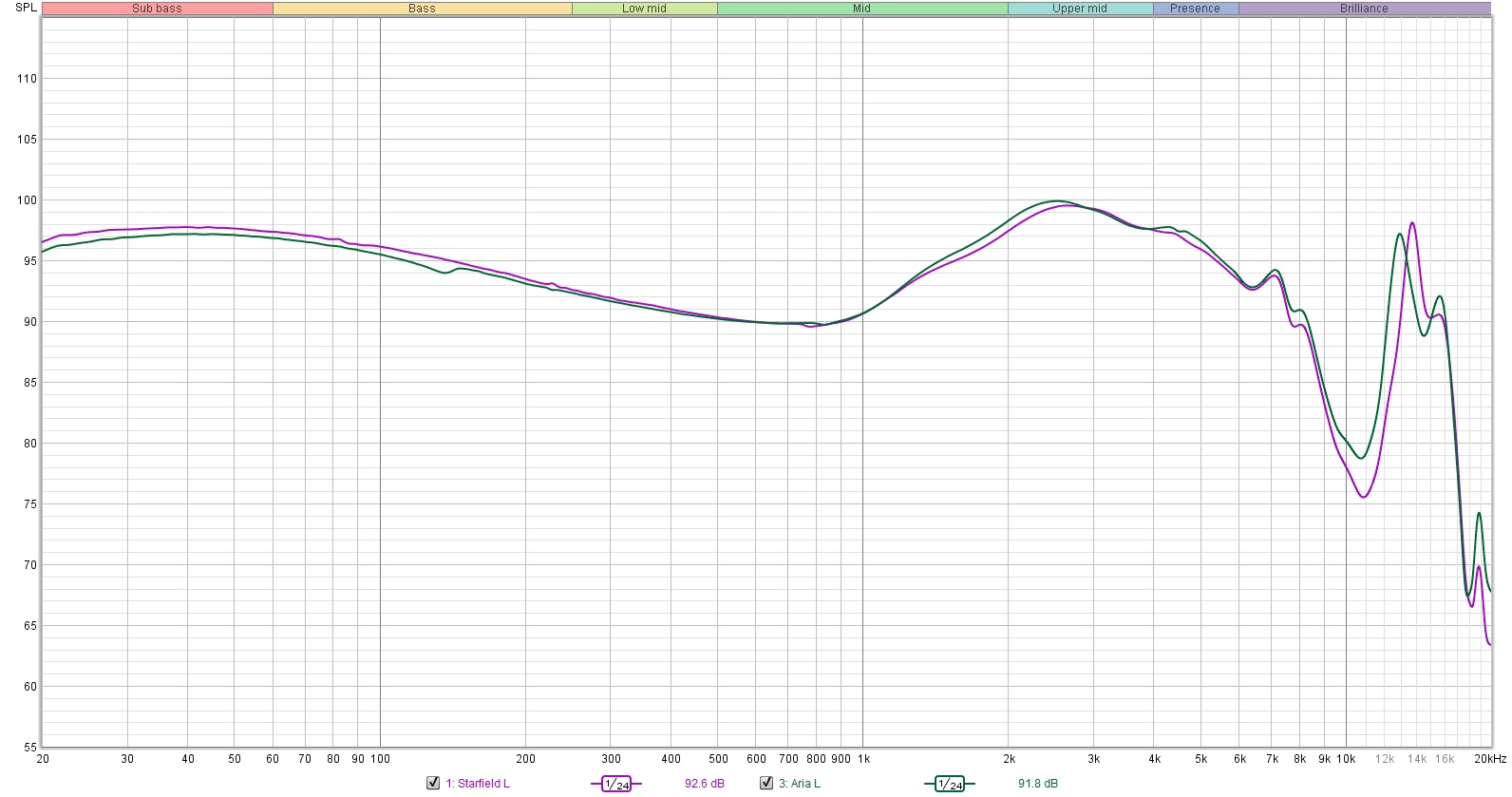 Note: My impressions are based on use with large-sized Misodiko eartips, which Moondrop rebrands as MIS tips.

The Moondrop Aria has a virtually identical tuning to the Harman-ish Moondrop Starfield. However, after extensive listening, I feel that the Aria narrowly edges out the Starfield in terms of detail retrieval and resolution. This became evident to me after repeatedly listening to the first 30 seconds of the track First Punch by Nothing More.


With the Moondrop Aria, the micro-dynamics of the hi-hat pattern at the opening of the song are a hair clearer to me. Similarly, when the bass guitar enters, there is greater space and definition between it and the kick drum with the Aria as compared to the Moondrop Starfield. Another improvement the Aria makes is the reduced degree to which vocals overwhelm lower midrange instrumentation. On many Harman-ish IEMs, such as the Starfield, vocals are front and center and have a tendency to overshadow lower midrange instrumentation on busier tracks. The Aria has slightly better clarity and balance in this respect as compared to the Starfield. I want to emphasize that these distinctions took repeated listens and close attention to draw out and are not anywhere close to night-and-day differences. If you are listening to music and not gear this will not be something you notice, and I do not endorse buying the Aria to replace a Starfield already in your possession on these grounds.
The Moondrop Aria has elevated, well-extended sub-bass that recedes as the frequency response transitions into the mid-bass to avoid creating congestion in the lower midrange. The Aria offers healthy amounts of rumble and slam for the average listener, though both bassheads and neutrality purists may be disappointed by what has become the consensus bass tuning for IEMs. The bass is both impactful and precise, with excellent speed and articulation. The bass has good texture despite the level of restraint shown in its presentation.
As mentioned before, the Moondrop Aria’s mid-bass recedes early enough to avoid creating congestion in the lower midrange, but not so early as to rob notes of weight or warmth. Like the Moondrop Starfield and other Harman-ish IEMs, I hear the Aria’s midrange tonality as dead neutral, though listeners accustomed to IEMs with a warmer tonality will likely find it cool. While the lower mids are recessed compared to the upper mids, male vocals intelligibility is excellent. Male and female vocals are perceived evenly. Female vocals are clear and presented without a hint of sibilance. The balance struck between presence and smoothness is exceptional, and timbre is excellent.
The Moondrop Aria’s treble is crisp and energetic, with ample air and sparkle. Transient delivery is fast but not unnaturally so. Instrument separation is excellent. The Aria’s soundstage is a bit wider than the Starfield’s, but the Starfield has better imaging.

AMPLIFICATION REQUIREMENTS AND SOURCE PAIRING:
Like the Moondrop Starfield, the Moondrop Aria can be driven to a comfortable listening volume with a competent dongle. I did not notice hiss with any of my sources. 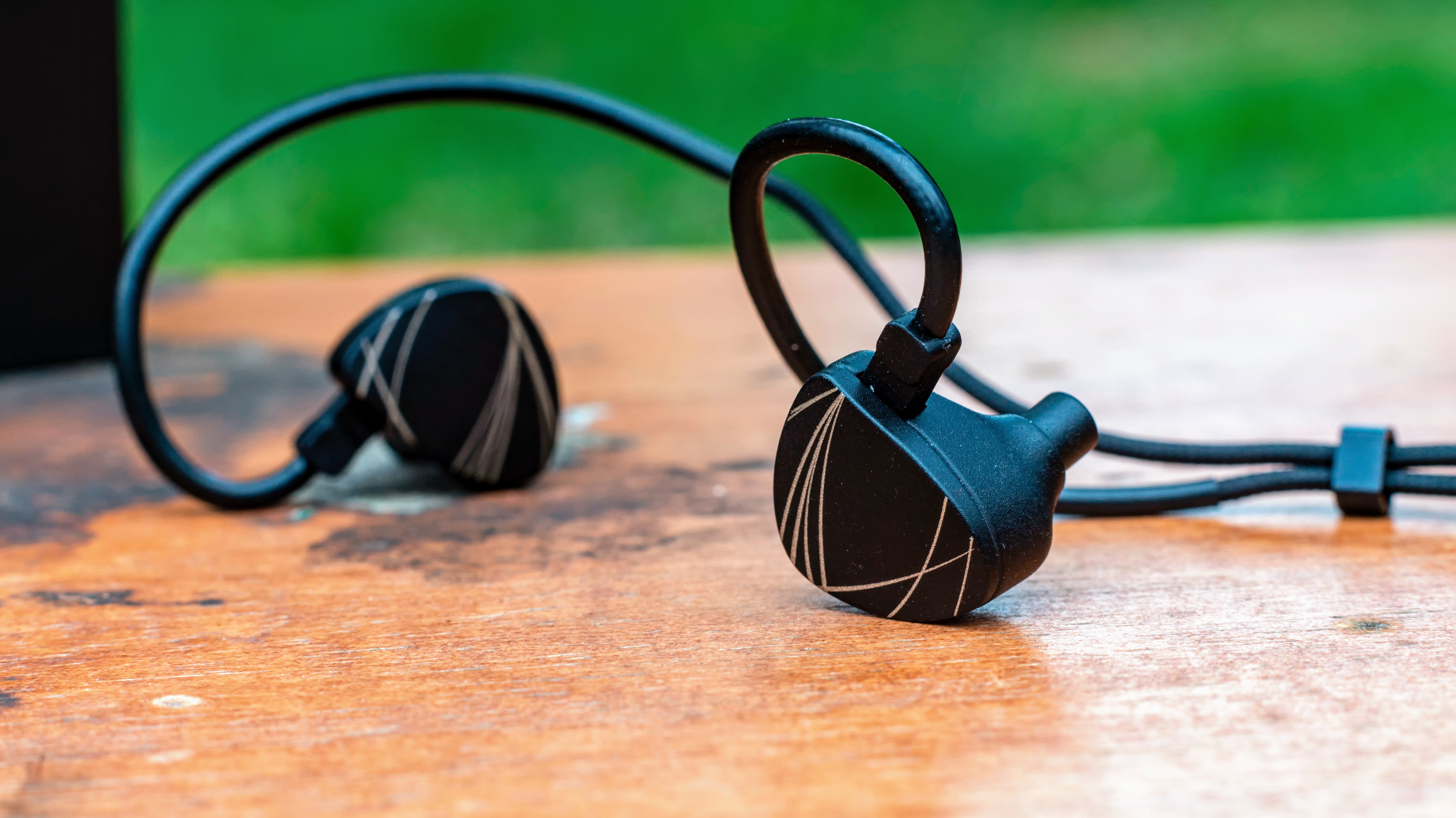 The Moondrop Starfield was already an incredible IEM for the price. With the Moondrop Aria, you get a much better cable and slightly better technical performance at a lower price. As I indicated earlier in this review, I do not feel that the Aria offers technical improvements significant enough to warrant a purchase from existing Starfield owners. However, if you’re just getting into IEMs, you would be hard-pressed to do better than the Aria at the sub-$100 price point.
Last edited: Apr 12, 2021
Reactions: harry501501, G777 and shenzhenaudio

shenzhenaudio
Always enjoy your great shot and much detailed explanation, thanks a ton!

4ceratops
I ordered them 15 days ago and my expectations are growing. Thanks for the review.
Read more…