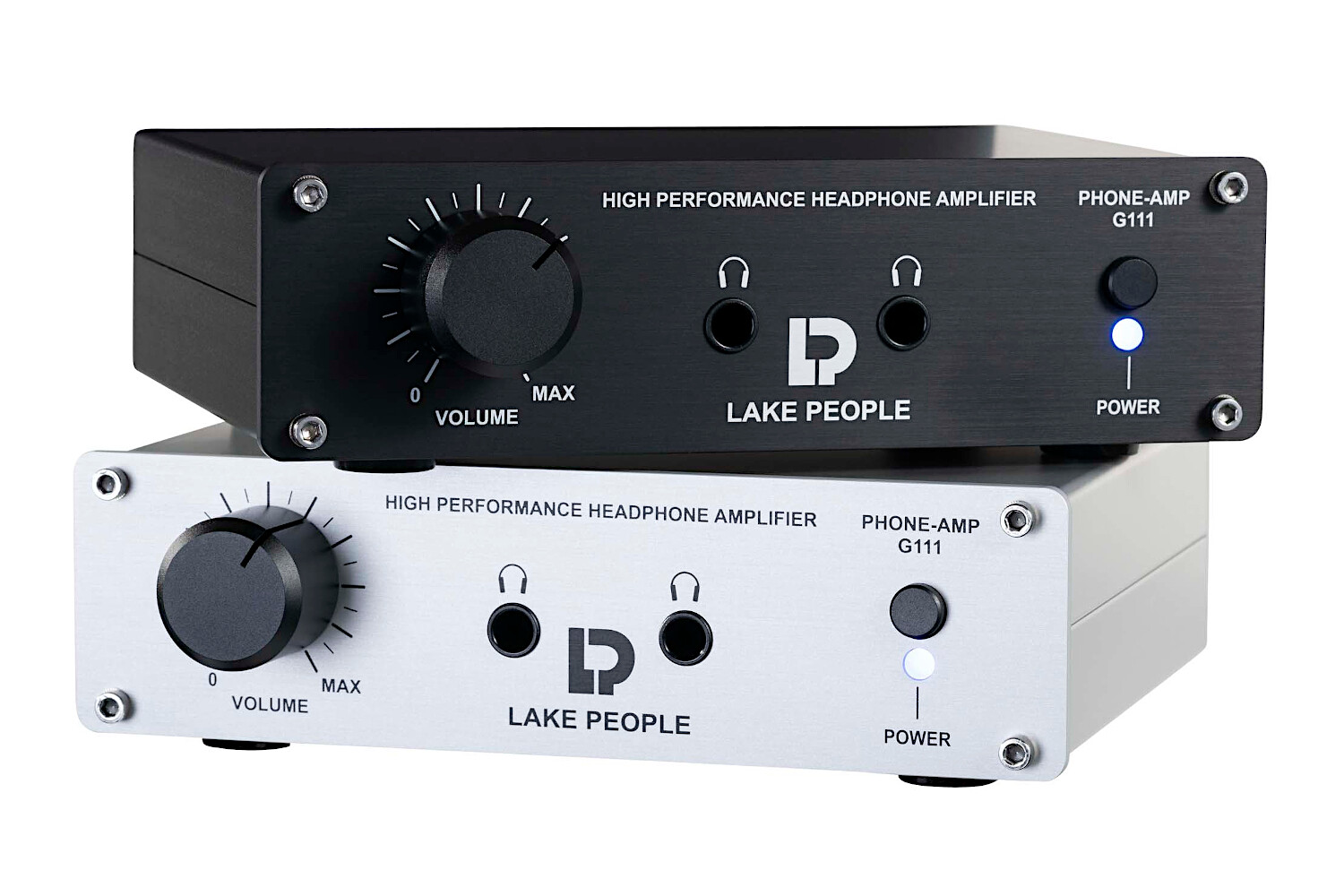 I’ve teased this one a few times and it’s time to deliver. Here is my review of the Lake People Phone-Amp G111 (that’s its actual full name, turns out, as printed on the faceplate). The G111 is a single-ended head amp geared more for studio use than home use, but sounds very good in either application. It currently lists for $549.95 USD on Power Holdings, Inc.’s webpage (https://power-holdings-inc.com/Lake-People-G111-Headphone-Amplifier-p137192152).

The G111 is a rock-solid mid-fi headphone amp with a studio-neutral signature, excellent detail retrieval, loads of power, and that plays nicely with a wide range of headphones; low-impedance dynamics, high-impedance dynamics, large planar-magnetics, they all sound great.

The G111 is not physically large, it’s smaller than the chassis Schiit uses for the Asgard 3, Bifrost 2, Jotunheim, and Lyr 3, but it’s surprisingly heavy. It has an all-aluminum chassis and what must be a serious internal power supply. The back panel sports an RCA unbalanced input, an XLR balanced input, and a button to toggle between the two – that’s right, the input selector switch is on the BACK. This annoys me, but it’s entirely possible that most users will be using just one of the inputs and never touching that switch. I spent most of my listening time using the XLR input. The brief amount I used the unbalanced input suggests that there’s basically no difference in sound quality from either input. The front panel has a power button, a blue power indicator LED that manages to be one of the least blinding blue LEDs I’ve ever seen, the volume knob, and 2 (that’s right 2!) 6.35mm (1/4”) unbalanced headphone outputs that can be used simultaneously. The volume knob is attached to an Alps RK 27 potentiometer. The pot is not smooth turning, there are notches as it turns. This is neither good nor bad but is a bit unusual among headphone amps I’ve used. The dual headphone outputs are also something I really appreciate as a reviewer. The ability to plug in 2 headphones for quick comparison is great: 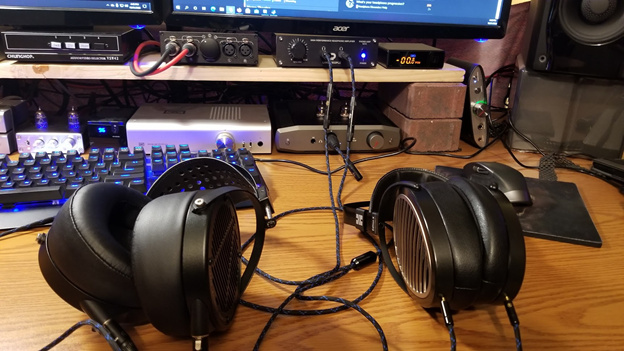 That was back when I was reviewing the Audeze LCD-X and comparing to my HiFiMan Edition X V2.

These dual outputs are more intended for studio use and having two people work collaboratively on a mix. At home it’s conceivable you could turn listening to headphones into a social experience, but the introvert in me who uses music to escape thinks that’s weird and uncomfortable. To each (pair) their own, though.

Power is a virtual non-issue with the G111. If you’re not trying to power a HiFiMan HE-6 or Susvara, you’ll be fine. Rated power is 900mW at 300Ω and 600mW at 600Ω. For a brief stretch I had 2 600Ω Beyerdynamic headphones plugged into at the same time and it complained not at all even at volumes way past what I would ever listen to.

The G111 has a studio-neutral sound signature with seemingly no part of the audible frequency range emphasized or recessed. It’s also the ‘cleanest’ sounding solid state amp I’ve heard that’s not built on THX or similar tech. It doesn’t quite have that seeming ‘black void’ sonic background that I heard with Magnius, Topping amps, Atom, or Geshelli amps, but it’s not far behind. At the same time, it’s not an analytical or clinical sounding amp either. There is a bit of smoothness here which adds a generous dose of enjoyability to the sound. This smoothness makes it worthwhile as a home use amplifier instead of just being a studio amp. The treble, while not recessed, is also not piercing. Some might call the treble rolled off, but I don’t think that’s accurate. The extension and sparkle are appropriately present but the upper frequencies are so well controlled that I almost never hear this amp go sharp or piercing – even with sharpness-prone headphones like the DT-880 or my Lawton’d X00. The bass similarly is well extended, punchy, and very well controlled. The midrange is neither remarkable nor distracting. I don’t detect any grain in the mids, but the timbre isn’t a standout feature like on Schiit electronics or the Monolith Liquid Platinum. Even so, the timbre is not bad or distracting. The G111 also handles dynamics very well. I think that’s in large part because it has lots of power but also uses that power effectively, it always sounds in control and manipulates the drivers very effectively.

There is really good detail retrieval here. In stock configurations, the G111 extracts more detail from the music than the Monolith Liquid Platinum. With the right tubes, the MLP can sometimes edge ahead, but out-of-the-box it’s G111. Midrange reverb comes through very clearly. Vocals and instruments are well separated from each other.

The soundstage is wide, has decent depth for the price point, and has decent verticality. I really noticed this verticality when I compared the G111 to the Jotunheim 2. The Jot 2 felt like it was putting a firmer lid on the top of the soundfield where the G111 very comfortably extended higher. The imaging has neither been something that wows me nor do I feel it is lacking. The same can be said for spatial separation – not stand out but also not a weakness.

COMPARISON WITH OTHER AMPS

The amp I have the most comparison time with the G111 is the Monolith Liquid Platinum (MLP). The MLP can change its sound somewhat with tube rolling and that can change the results of this comparison some. With MLP’s stock tubes the G111 is better at detail retrieval and a little cleaner in the treble. The MLP is a bit more mid-forward, a little bit stronger in the bass, and has an overall warmer and smoother character. They have roughly equally large soundstages in width and verticality, but G111 has greater depth. Using Genalex Gold Lion tubes gave the MLP a clear edge in overall spatial performance but also made the MLP more treble-sharp and the MLP’s bass a bit one-notey. When using Amperex PQ Gold Pin tubes the G111 and MLP have similar soundstage width and height but the MLP has the edge in depth. The MLP is a bit more mid forward with a bit better bass extension and has noticeably more natural timbre and a slightly smoother presentation G111. Detail retrieval is about even between the two. A key to remember here is that it’s getting really hard to find a pair of Amperex 6922 PQ Gold Pins for less that $200 anymore so they are going to add significantly to the cost of the MLP.

I had the Schiit Jotunheim 2 here for a couple of weeks recently and came away thinking the G111 was noticeably sonically superior. From its balanced headphone output, the Jot 2 had a very similar sound signature to the G111 but the G111 had better soundstaging, better imaging, a higher level of detail retrieval, etc.

The $400-600 headphone amp market is crowded and I haven’t heard them all. So, check this space in the future for more possible comparisons. The G111 quite often gets compared to the Rupert Neve RNHP, and for good reason, they’re both solid state amps at about $500. I haven’t heard an RNHP yet but many who have say that it is rather headphone and sometimes DAC picky. Many also describe some excellent synergies with the RNHP and various headphones and DACs and I don’t hear as many stories of that type about G111 as much. I have not observed any such pickiness with the G111, but nor did I hear anything standout as an amazing synergy. The G111 seems to be quite a generalist, sounding good with just about every headphone and DAC I’ve thrown at it so far. If you ask me “Will headphone _____ sound good on the G111?” As long as the headphone is reasonably price appropriate, I’ll probably say yes.

The Lake People G111 is a really easy amp to recommend in the $400-600 category. It plays nice with a wide range of headphones and dacs and has plenty of power. It has a neutral signature with a hint of smoothness that makes it very well suited to both professional studio use and kicking back and enjoying some tunes in an easy chair. It will make mid-fi headphones sing and will still do a solid job powering headphones up into the $1000-2000 range. Because of its generalist nature, it’s a rock-solid foundation to explore a wide breadth of headphones.

OK, that’s my G111 review. As always, thanks for reading and enjoy the music!
Reactions: Terriero, shampoosuicide, mauaudiocr and 6 others
View previous replies…

mauaudiocr
It seems not a popular amp at superbestaudiofriends, according to them is a poop amp, I have one, I am not an experienced audio guy, to me it sounds fine but again I am not experienced and is my first amp on the $500 mark.

Pretty sure the amp section is SE. The balanced output is there because it's designed for pro audio situations where balanced connections and long cable runs are more commong. For home use, it does a fairly good job taking out any PC ground loop noise through its balanced input - at least it did for me.