Wireless Bluetooth Headphones plus with apt-X and apt-X LL. You can enjoy low latency, good fault tolerance, and high sound quality. Put them on, and suddenly everything changes. Your music is deep, powerful and balanced, and so quiet that every note sounds clearer. Even air travel becomes enjoyable, as engine roar gently fades away. No matter how noisy the world is, it's just you and your music-or simply peace and quiet. And the Bluetooth headphones support both wireless and wired modes, switch 2 modes by a 3.5mm Audio Cable. Keep listening even the battery runs out.
Share:
Facebook Twitter Reddit Pinterest Tumblr WhatsApp Email Share Link

Pros: Good feature set for the price - USB Type-C charging, decent ANC, excellent Bluetooth connectivity, good treble detail and soundstage with ANC + wireless
Cons: Mediocre battery life with ANC, bright treble with ANC on, distortion with AptX, auto-power-off and volume limiting.
Last year, many Bluetooth budget headphones offered active noise cancelling as well as aptX codec, but most were missing one seemingly minor feature - the lack of USB Type-C charging. With a stylish design and some improvements over the previous model, the Dyplay Urban Traveller 2.0 is one of the few available but emerging options to have this particular feature. Early reviews suggested it had very good noise cancelling and sound quality for the price, but does excel beyond its price point? 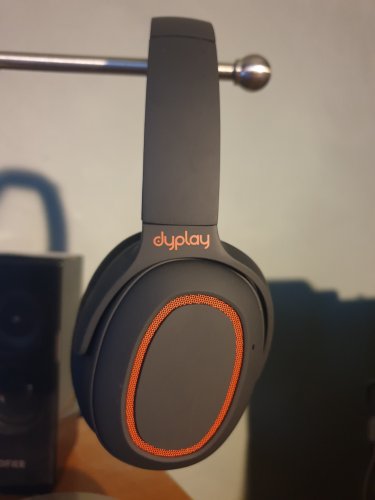 I bought these off Aliexpress on Black Friday. Shipping via UBI to Canada took approximately 2 weeks.

Design 8.5/10
For a budget product, these have very nice build quality and aesthetics. I really dig the orange accents on the grey soft-touch plastic finish - a nice departure from the typical glossy plastic found in headphones at this price point. Although there is some slight clicking noises, the hinges don't creak or squeak as much as some other plastic headphones. They fold flat (with earcups facing out when around your neck) as well as inward so they can be compacted into the carrying pouch. It would have been nice to see a hard carrying case though, as the original Urban Travellers had this. 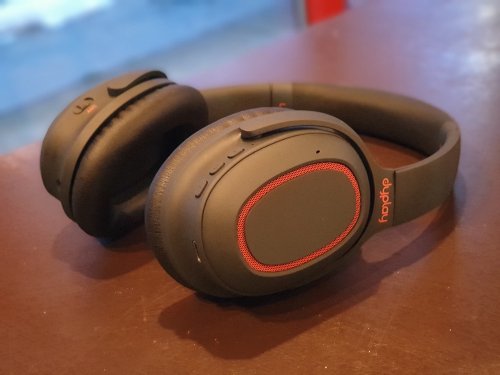 The headband is padded with rubber while the earpads are made of gel. They appear to be not readily removable. The ANC switch is on the left earcup while the three multi-function buttons are on the right earcup. ANC operates independently of the Bluetooth power.

These have a USB Type-C charging port and supports a Type-C to Type-C connection. This means I can charge it directly off my Type-C laptop, unlike some other products out there which only support Type-C to A connections. Charging speed is quite fast - it took about 45 minutes to go from the "low battery" warning to a complete charge. They also have a 3.5mm port for wired audio.

Comfort 7.5/10
These headphones have gel-cushion earpads which are quite plush and comfortable. They are similar to memory foam but a tad more firm. They also trap a bit of heat meaning your ears will stay warm, but it may be hot on summer days (in the cold Canadian winter I have yet to test this out!). The headband does not have much adequate padding, with the inner section being made of rubber. Clamping force is ok, but they do press slightly against the top of my head. I've noticed that after a long listening session, they do exert some strain on my forehead, and the fit is a tad loose around my ears. Shaking my head vigourously will cause the headphones to slip off fairly easily. Indeed I found that laying back slightly on a reclining chair was enough for the headphones to gradually start slipping off from my ears.

Isolation - 8.5/10
The Urban Traveller 2 touts dual-mic noise cancelling. In my testing, I found it does very well for low frequencies, effectively removing the droning sound of my ceramic heater or the low-frequency rumble while commuting. However, it does not do much to remove high frequency noises. I can still hear my laptop's cooling fan or the higher frequencies of vehicle noise and people talking, although it is slightly attenuated by the passive isolation. ANC also adds a fair bit of hiss and is sensitive to sudden vibrations which cause it to distort. I do not recommend these for running. For everyday non-active usage, I find that these headphones do a very respectable job with ANC at this price point, but the way it handles higher frequencies and sudden noises sees something to be desired.

Sound quality - 7/10
Overall, the sound quality is a mixed bag and varies greatly on how you are listening to these, in particular whether ANC is turned on or off. Thus I have separated the impressions accordingly:

ANC off and wireless - They sound relatively balanced with some emphasis in the bass. The sub-bass is punchy without drowning out the mids. The treble has some decent sparkle but there is also somewhat of a muffled tone. That said, if I didn't know how these sounded with ANC turned on, I probably wouldn't mind this tuning as it is still quite decent. 7/10

ANC on + wireless - The muffled tone of the mid-bass/lower-mids is gone and the treble is greatly emphasized, giving a sense of more detail and a larger soundstage. The bass is very well-controlled in this mode, lacking any sense of bloat or boominess while still having a good amount of punch. There are occasions where it does lack a bit in impact though. The lower mids sound recessed while the upper-mids have some emphasis towards the lower treble, although vocals tend to sound crisp. Although I personally prefer this lean, detailed tuning, I can see how those who are sensitive to sibilance may be put off by it. 7.5/10

Wired playback is rather muffled in the lower mid-bass and the highs sound rolled-off, even more so than ANC-off + Wireless. I would only use it as a last-resort when the battery is drained. Turning on ANC brightens the treble significantly and reduces the bass, even more so than ANC-on +wireless. The treble is borderline sibilant in this configuration and I need to turn the volume down considerably - avoid if you have treble-sensitive ears. 5/10

The Urban Traveller 2 supports the AptX codec which should offer better quality than SBC or AAC, but I have noticed a few situations where it actually sounds worse. In certain tracks, usually when a snare drum hits hard, using AptX seems to introduce a crackling or plosive sound that occurs intermittently left and right. An example of where this occurs is in the intro of Luv(sic) Part 3 by Nujabes (Modal Soul version), when the DJ-scratches come in. Upon further testing my older 1More MK802 also exhibits the same behaviour. AAC or SBC playback doesn't have these issues, and the volume is slightly lower with the treble a tad more rolled-off. However, the device still re-connects the next time to AptX by default. On Windows 10, I am pretty much stuck using AptX.

UPDATE: I have found somewhat of a solution to this AptX crackling issue on Windows - lowering the volume of your music player (preferably below 80%) will stop the distortion from happening. Unfortunately this does not work with Android.

I have noticed my unit seems to have slightly more treble and mids on the left channel than the right one. Pressing the earcups against my ear sometimes evens out the sound suggesting it could be an issue with driver pressure, but I have run across quite a few audio products recently with poor driver matching.

In all modes, I find the loudness to be acceptable for most situations, but it is still on the low side compared to some other over-ear headphones. There is also a fair bit of audio hiss when using Bluetooth and audio is playing. One annoying quirk is that there is a volume limit in place and the loudness does not change above 60% on my devices. Dyplay has confirmed to me that they have set a volume limit, but it would have been far more practical if these scaled properly to 100%. If I want to lower the volume I have to bring my volume all the way below 60%. Note that this issue only occurs if your device has its volume synced to the headphone; activating "disabling absolute volume" or disabling "media volume sync" on Samsung devices allows you to scale the volume levels independently.

Connectivity - 9/10
As long as you are using this with one device, the Bluetooth connection is very solid. I've had next to no disconnects as long as I am near my source device. They also support multipoint connection with 2 devices at once. This is convenient if I wish to use it with both my laptop and phone without having to re-pair it each time. However, I have noticed interference if I am playing music on my laptop, while scrolling certain videos on my phone. To minimize this issue, turn the audio output device to the phone or another device when you are not using it. Also, they will constantly make a faint beep and attempt to reconnect, if I happens to be too far from my laptop while it is still awake. I had not turned off my laptop before going outside to shovel snow, only for the audio to constantly beep and reconnect.

Usability - 6.5/10
These use button controls which respond quite well. On the right side, the power button doubles as play/pause while the other two buttons can be used to change tracks or increase/decrease volume. At maximum and minimum volume, there is a voice prompt telling you of such.

Another irritating quirk is an auto-power-off feature which cannot be disabled. While this is meant to save battery life, Even when you have the headphones connected to a device, they will automatically power off after about a minute of inactivity, with the voice alert saying "power off". A small workaround for this on PC is to open a video/audio editor like FL Studio or Sony Vegas, which causes the audio to be constantly "active" and thus prevents the headphones from turning off. ANC can still be left running as it is independent of the Bluetooth switch, but I often forget to turn it off because it is on the opposing earcup. Dyplay has told me that the power-off feature is built into the chipset (QCC3005), but I could not find any further information on this. This does not happen with true wireless earbuds that use QCC chips and a number of competing ANC headphones reportedly don't have this issue.

Battery life with ANC is rather mediocre at 12 hours. For me, this translates to about 2 days of regular usage. Note that the last portion of battery will have a repeated warning and is therefore unusable (a common issue with many Bluetooth headphones). Without ANC, wireless playback is a respectable 22 hours. Although the charging speed is reasonably fast, I would have preferred if there was more battery capacity even if it meant a longer charging time. You cannot use Bluetooth while it is charging, which is a bit of a disappointment and inconvenience.

Conclusion 7.5/10
Overall, Dyplay Urban Traveller 2 has to offer for the price - decent ANC, a detailed sound and reliable Bluetooth connection, they are let down by a number of unnecessary compromises. With more budget Bluetooth headphones closing the gap with similar features (AptX, ANC and USB-C charging), it will be harder to recommend these.
Last edited: Jun 6, 2020
Reactions: B9Scrambler
Read more…