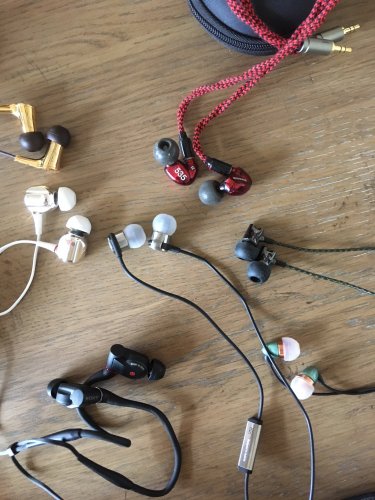 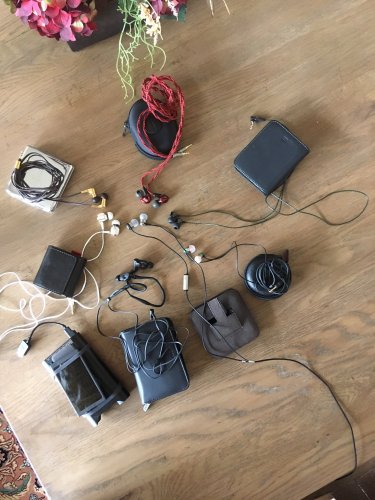 As my signature line can direct you with its links, I have compared well over 100 IEMs and headphones on various acoustic criteria such as transparency, soundstage, treble detail, bass depth, and the like.

But what about... EXCITEMENT? That is what can change your mood from bad to good, or make your head bob or feet dance. I decided to compare seven IEMs purely on the excitement that they generated.

I had encountered a piece of music a few years ago, "I Will Survive" as sung by Enrique Inglesias, that I used to start to collect a playlist of music that excited me. The first minute or so of the piece starts with the bite of violin bow on string and preserves the microtexture roughness that comes from tacky rosin dragging then releasing the violin string, despite the smoothness of overall sound. It moves on to include rhythmic tom-tom and kick drum with cymbal, all undergirded by a wonderful, taut bass line. Then a male voice begins the singing and filling out the midrange.

As I compared IEMs for excitement on that piece, I learned that for me, excitement consists of:

* Treble zing (almost tizziness) that gave spark to cymbals;
* Taut bass, with more twang than thump, to undergird the foundation;
* Drums (tom toms and snare) with a blow so sharp as to seem like an impulse;
* Mid-range internal structure... lots of counter rhythms going on in instruments and percussion;
* Spaciousness, so that instruments were airy, surrounding me, and separated in space.

These IEMs are shown in the next figure with their case and with the Sony PHA-3 driven by the Sony NW-45 player that I used to compare them. The subsequent figure moves in to the earpieces themselves.

Figure 2: Closeup view of the earpieces of IEMs as shown in Figure 1

Comments on Excitement Factors of Each IEM

Shure SE-535LTD with Norne Draug 2 cable: This IEM was very high on the factor of "treble zing," having almost a tizziness about its sound (the red, or LTD, version of the SE-535 is known to be brighter than the standard bronze version). However, when heard after the FAD Heaven VIII, it had a hollowed-out sound to its midrange and exhibited a need for more bass. I also had to spend over a minute each time I inserted these to get the earpiece fully seated and the memory wire placed properly over my ears... a big inconvenience.

Sony XBA/N40: I love these IEMs, in part because I admired them longingly when they came out perhaps six years ago and could not afford them, in part because now, when I can, they are only available from Japan and are rare in the US, and in part, because their gold and white look so good with my gold and white iPhone SE. As a four-driver balanced armature, they have good bass (better than the Shure). The instruments and voice feel closer to you than other IEMs, and they do not feel spacious. They do not have a tizzy feeling to their treble. They are just "push and play," i.e., push them into your ears, no fuss, and they are ready to go.

Grado GR10e: I am a real Grado fan, and these IEMs capture the bright treble excitement of the Grado headphone line. They are overall brighter than, say, the Sony XBA-Z5. I found that their brightness becomes a bit of a deterrent to turning the volume up enough to start to get the mid-range and bass detail that also add to the excitement. The drums have exciting impact with these, though their bass is less than that of the XBA-Z5 and their is a bit of hollowness to the mid-range when compared with the fullest of these IEMs, as well as less spaciousness than some.

Sony XBA-Z5: These have more bass, and more bass excitement, than the other Sonys, the XBA/N40. The bass has the impulse/impact that gives excitement, and there is little treble tizziness, so you can turn the volume up to allow your ear to reach into the depths of the bass and midrange detail, adding to the excitement. The memory wire and ear-shaped modules cause putting these on to become a one-minute operation, similar to the Shures, which made me fume with impatience at times.

AKG-K3003i: These have long been my top-of-the-line IEMs based on comparisons of acoustic features. They have the most tizzy of the treble brightness of the IEMs here, which gives a lot of excitement, and they put the treble right into the middle of your head (a good thing). However, unlike the Grados with their bright treble, the AKGs allow turning up the volume and digging into the bass and midrange detail without becoming fatiguing in the treble.

Final Audio Design Heaven VIII : Wow! These are very exciting. They both give great treble tizz and deep-reaching, grab-it bass detail. They have great bass speed, while at the same time the bite of bows on violin strings at the start of the piece is strong and exciting. They have a very spacious sound, though not quite so much as the Sennheisers below. They are super convenient to put on - just push and go.

Sennheiser IE800: These were the most exciting, besting the FAD Heaven VIII by only a small bit. They have more bass than the FAD, but are just a bit less in the treble. You can easily turn up the volume to reach even further into the bass and mid detail of the music. They provide the best spaciousness, moving the instruments apart, introducing air between them, and showing a large soundstage, all increasing the excitement.

Ranking of IEMs By Excitement

In short with ">" used to mean "is greater than," the excitement factor goes as:

A ranking of these IEMs based on the 10 acoustic factors I have used in past comparisons (see my signature line) would give a different ranking, but I wanted to concentrate on the excitement factor as its own feature, which I have done here.
Last edited: Jun 21, 2020
180 compares, 84 components, 3 at a time; How We Rank The Headphones That We Own; 75 headphones compared via 144 3-way comparisons; Huge Comparison of (nearly) all Grados, History of Grado
Joseph Grado HP1000 HP1 w/ HPA1 amp; Sennheiser HD 800 w/ HDVD 800 amp, HiFiMAN HE1000 w/ EF-6 amp; AKG K3003i IEMs, Grado PS2000e, PS1000, GS2000e, RS1i w/ RA1 amp, Ultrasone Edition 10,...
Share This Post
Reactions: zombywoof, immortalsoul and FlowLikeWater
You must log in or register to reply here.