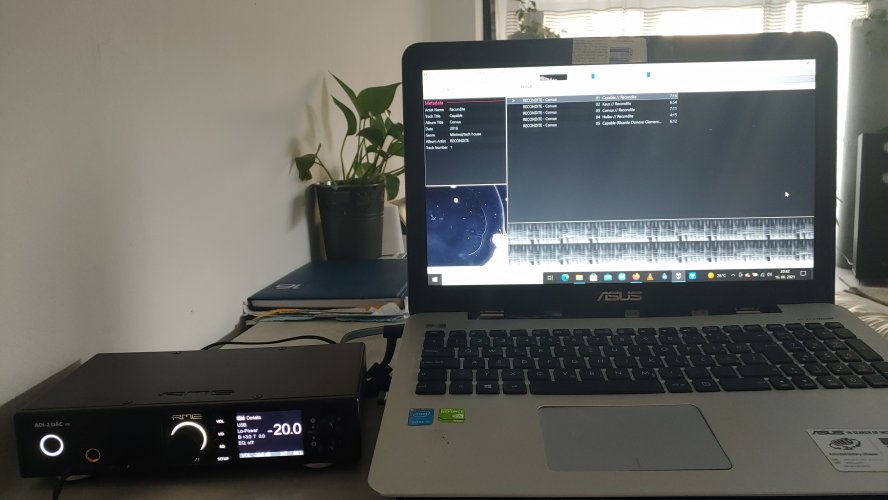 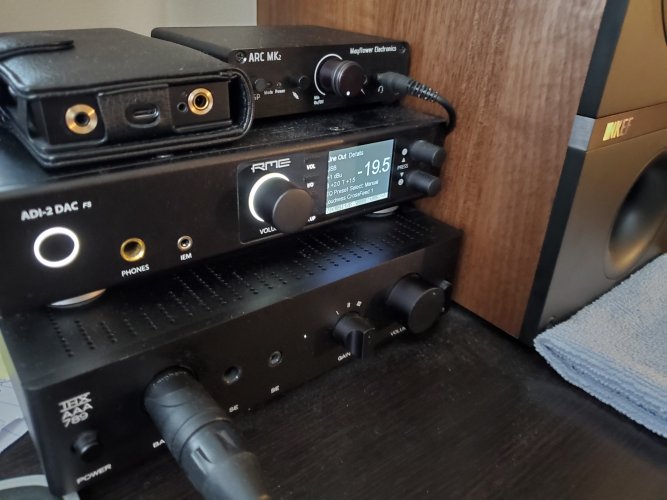 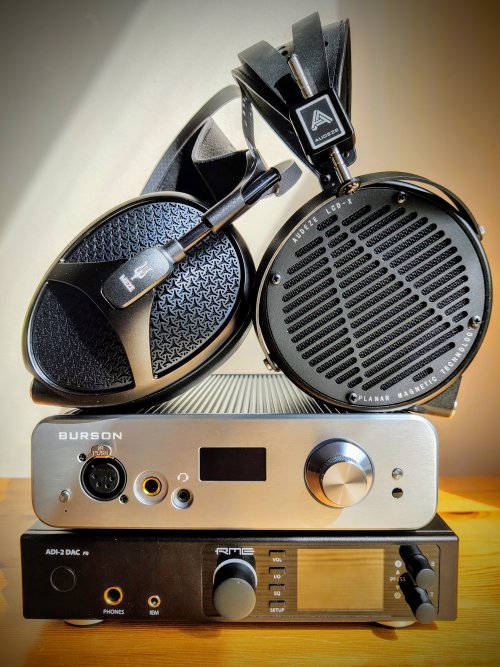 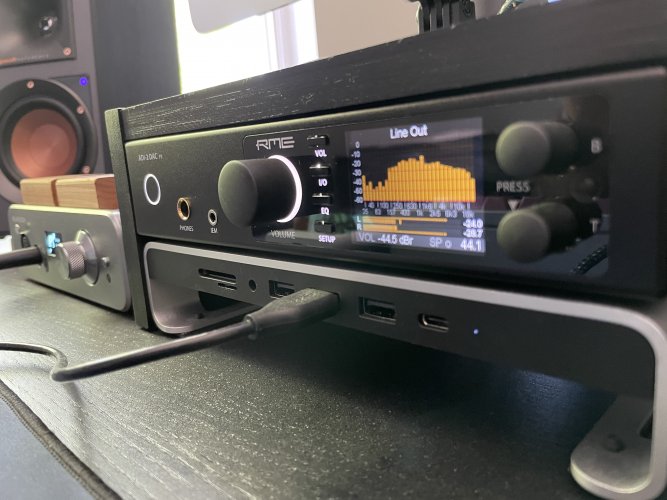 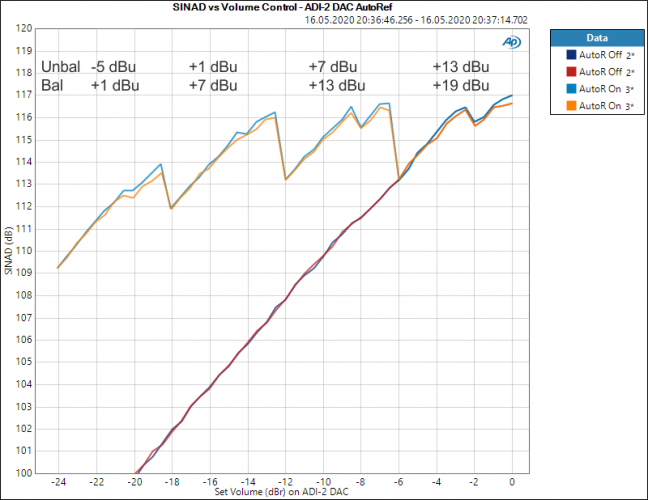 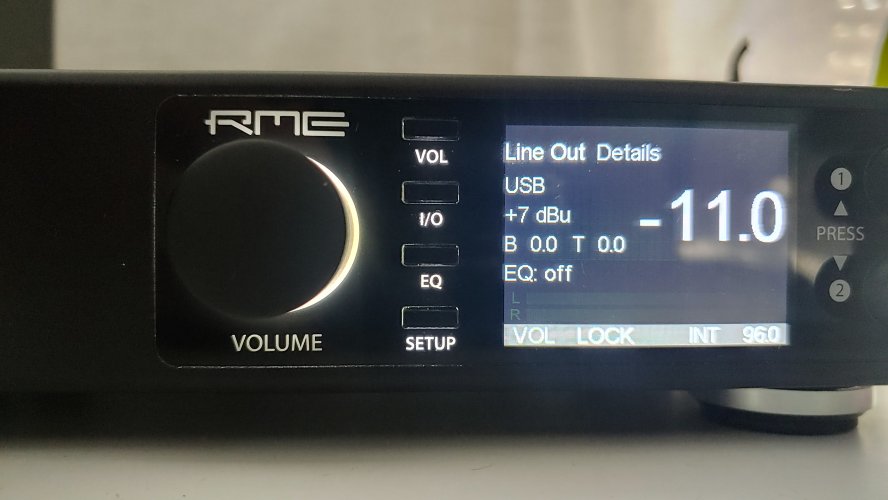 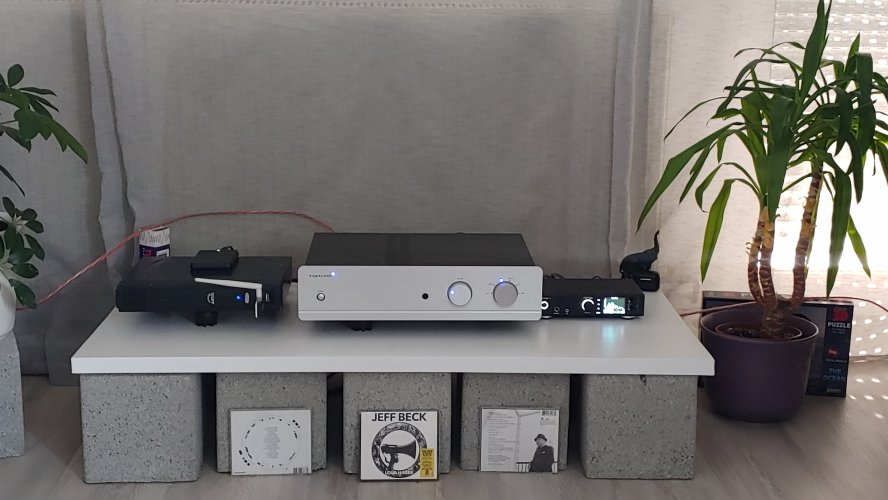 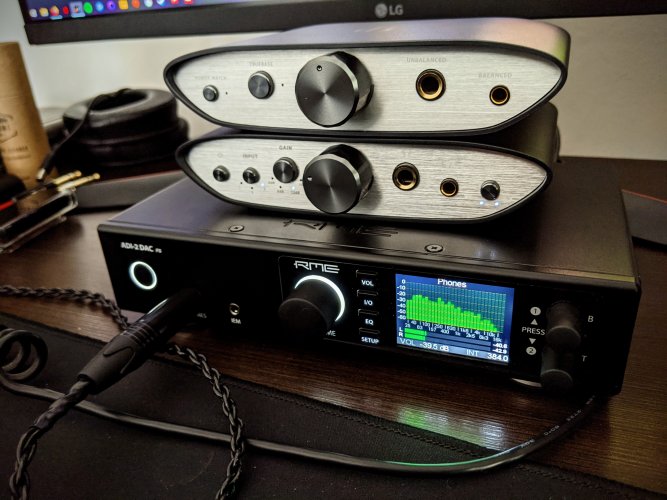 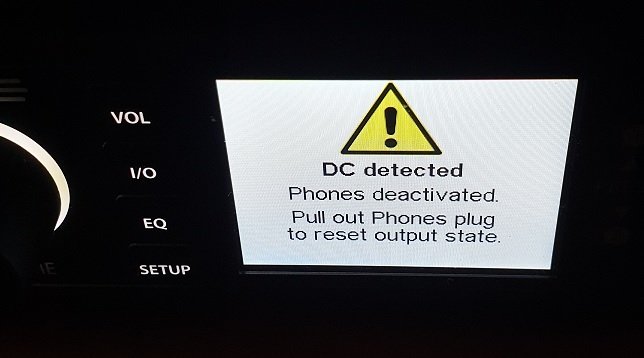 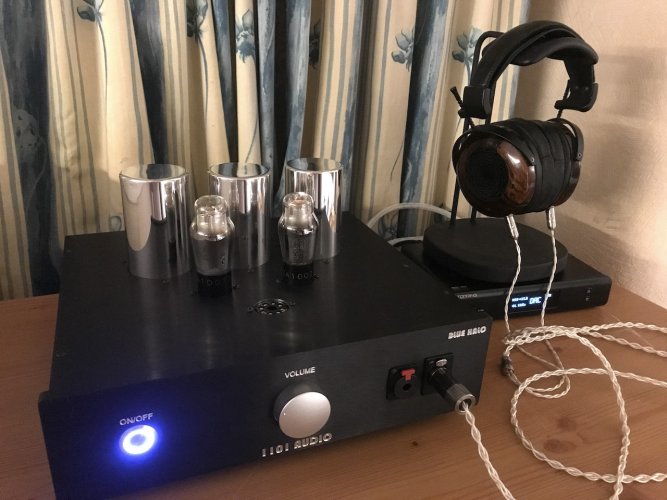 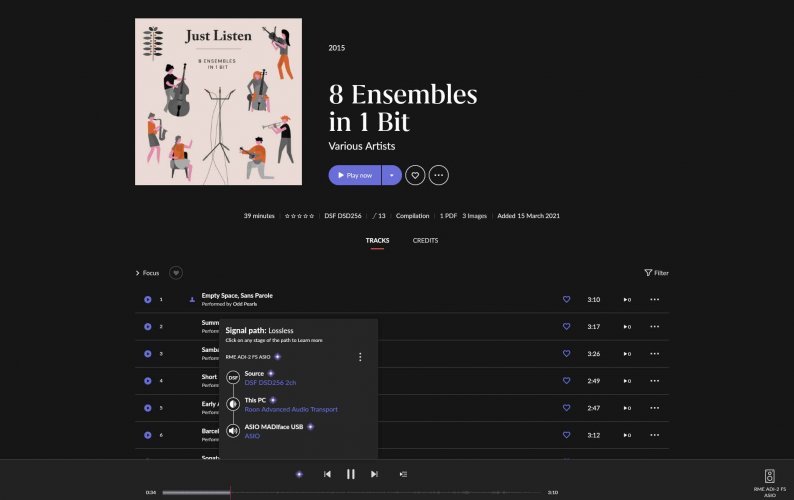 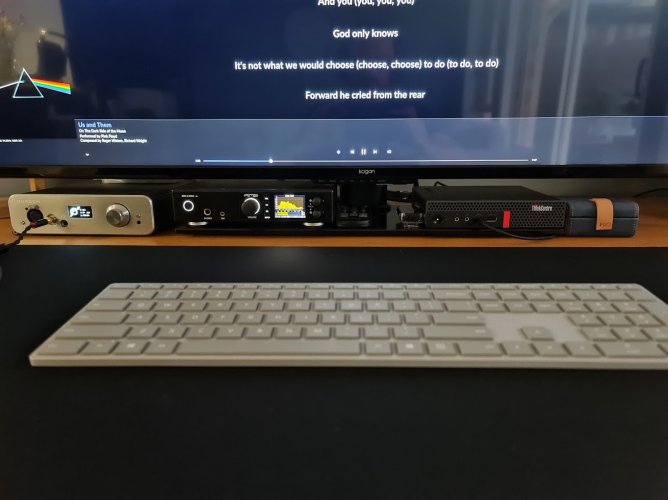 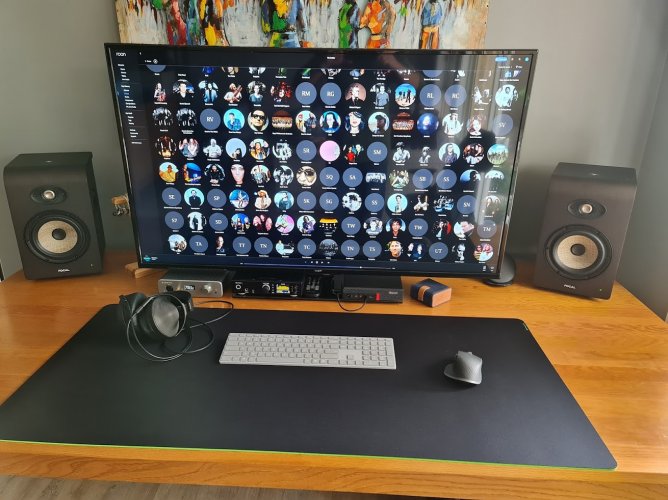 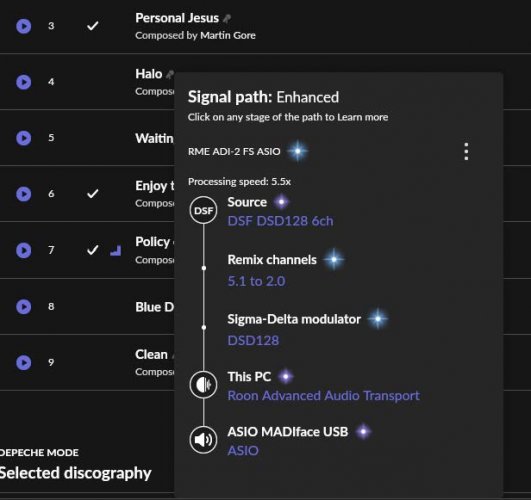 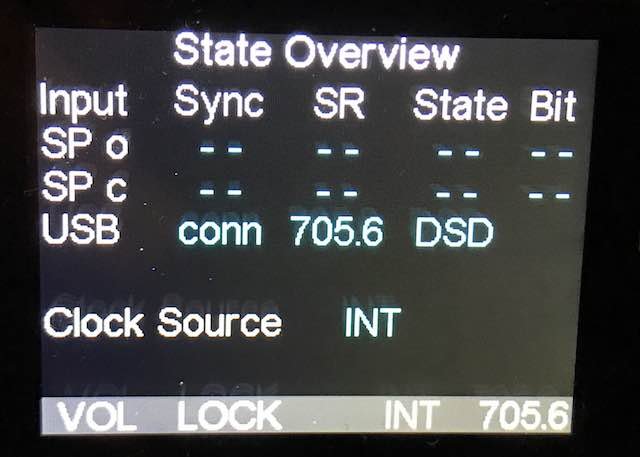 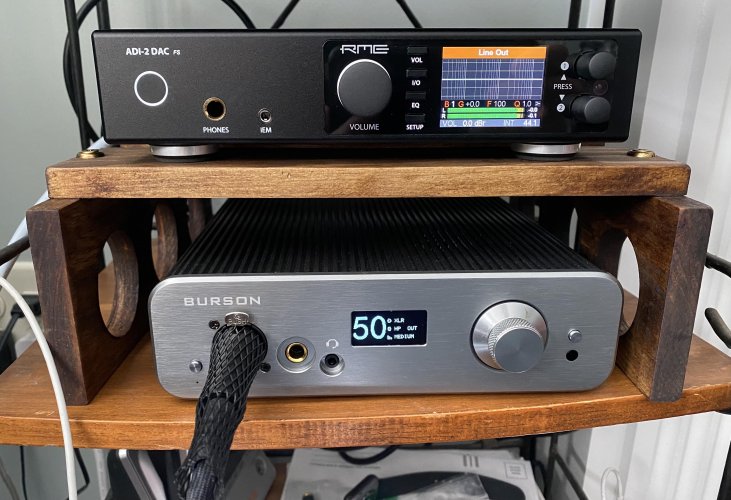 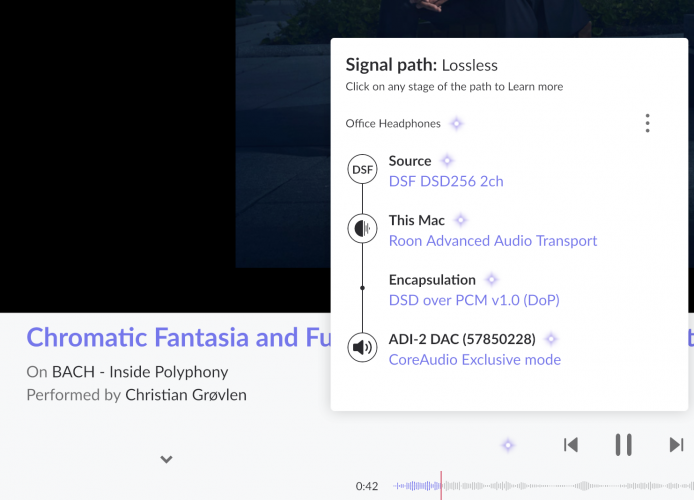 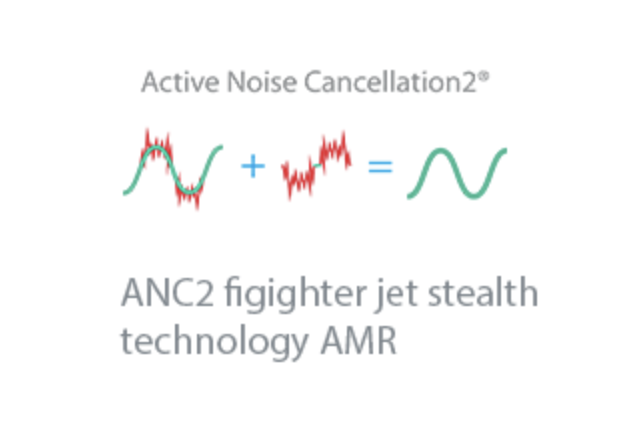 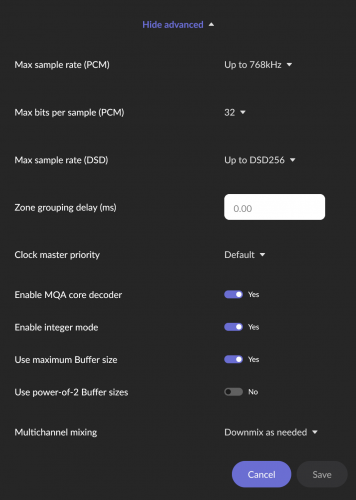 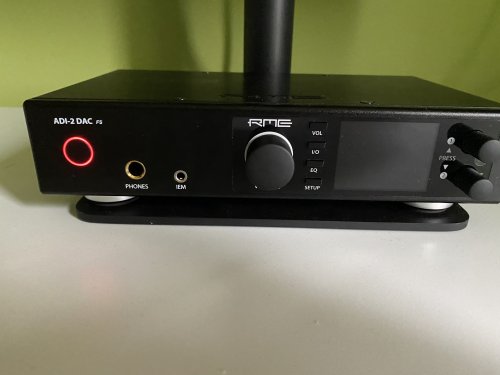 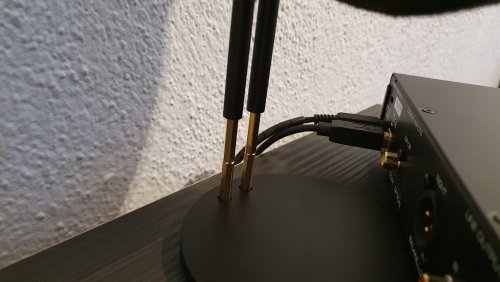 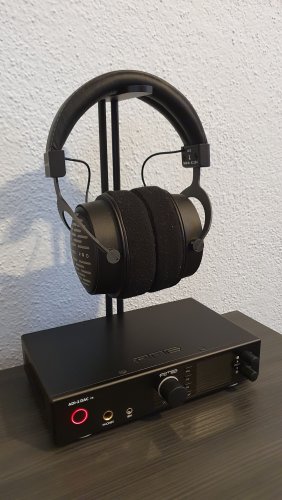 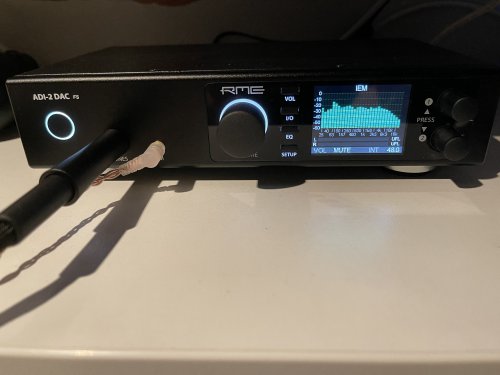 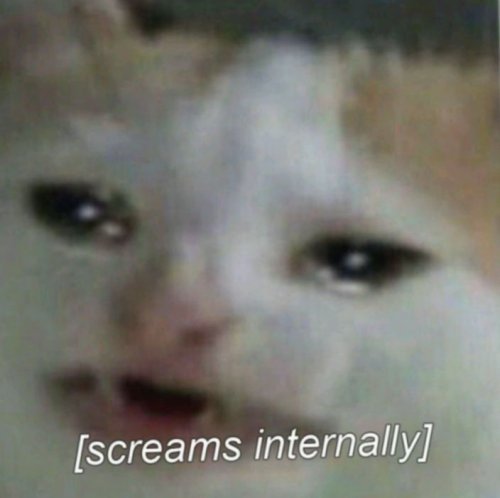 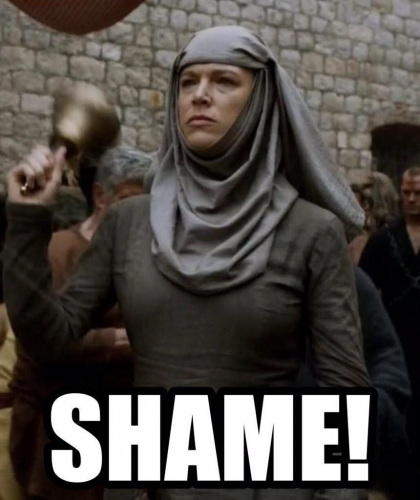 You are using an out of date browser. It may not display this or other websites correctly.
You should upgrade or use an alternative browser.
RME ADI-2 DAC Thread

The DAC
Packed into the compact half 19” format factor, this little gem is filled with the finest high-end electronics, offering a reference class conversion from SPDIF coaxial, SPDIF optical (ADAT compatible) and USB to RCA, XLR, TRS and mini-TRS.

Improving DA
With the DAC RME engineers took the opportunity to slightly enhance the DAC's analog output stage to be even more perfect as it already was. More relays, a different double symmetrical attenuator circuit and one additional buffer OP amp succeed in less noise and less THD. As the DAC-chip is the limiting factor here this is hard to measure, but nevertheless an important improvement, especially at lower hardware output levels typical for Cinch/RCA usage. The new hardware reference levels of +13 dBu, +7 dBu, +1 dBu and -5 dBu also add to this.

Super Low Noise for IEM lovers
The headphone revolution not only brought headphones but also IEMs (in ear monitors) back into the attention of audiophiles and music lovers. Modern IEMs have a reference sound that easily competes with bulky over-ear headphones, making them not only a mobile alternative, but also an interesting solution in home.

Modern IEMs are extremely sensitive and operate on very low voltages. As a side effect they uncover the noise floor of the player, DAC or headphone amp. When RME developed its Extreme Power headphone stage the basic noise floor was taken care to be as low as possible. Which was then confirmed in many reviews (most black background…). Even when used with IEMs.

Still RME wanted to make sure that even the most sensitive IEM combined with the most sensitive listener receive the full dynamic range on playback. Also capable outputs like the Extreme Power ones are not fully safe against operating errors and might blow up ears or IEMs.

RME's solution: adding the most advanced IEM output imaginable as second phones connection to the front of the ADI-2 DAC. Its ground noise floor is an astounding 10 dB lower than the one of the Extreme Power output (black hole background…), output impedance is near zero Ohms, THD reaches new record lows, click-free on/off is included as well as volume ramp-up, and the sound quality with any IEM is just amazing. We're sure you will love it!

SteadyClock FS
The ADI-2 DAC is the first device in RME's range with SteadyClock FS. There is not much to improve with SteadyClock, it has earned its accolades over years of flawless operation in numerous RME devices, guaranteeing that using the internal clock will produce exactly the same sound as when using an external one.

SteadyClock highly rejects jitter and handles all digital interface formats in an exemplary way. That's why SteadyClock's design and behavior didn't change in the DAC.

With SteadyClock FS the focus was put on reducing the self jitter of SteadyClock to new lows, by improving its second, analog PLL circuit, and referencing both Direct Digital Synthesis and PLL to a low phase noise quartz crystal.

The self jitter measured through DA conversion now reaches levels that usually are only available in master quartz clock mode, while SteadyClock still always runs in PLL mode - no matter if internal or external clock, sound is exactly the same (again).

A better Remote
The ADI-2 DAC comes with a remote that is not the usual cheap add-on. This nicely designed remote control has clearly labeled buttons, readable even in low light conditions without reading glasses, a nicely laid out button arrangement that is easy to remember, and perfect button ergonomics. Plus: It won't interfere with your ATV or other devices.

The DAC remote offers buttons for Standby On/Off, Volume, input selection (Optical, Coaxial, USB) and Mute. Four programmable buttons are added that can be assigned with 20 different functions and commands for total flexibility. There is no other DAC or similar unit with such a sophisticated, easy to use and versatile remote functionality!

It has all the bells and whistles that made the ADI-2 Pro famous, including its perfectly transparent sound signature and full DSP processing with Bass, Treble, Loudness, 5 Band Parametric EQ, Crossfeed and much more.

Do you know if the analog output bypass the volume pot now ? If I remember correclty it wasn't possible on the ADI-2 PRO.

The volume is digitally adjusted, hence you bypass it by going to +0dB or whatever's the level your amp likes the best.
We need to liberate the worms from their cans!

Looks like this is starting to ship. I should have one tomorrow from ZenPro Audio (never used them before. Will update here if I run into any issues from them, but I had a nice phone chat with the owner before placing an order to ensure they were actually in stock).
Basshead.Club 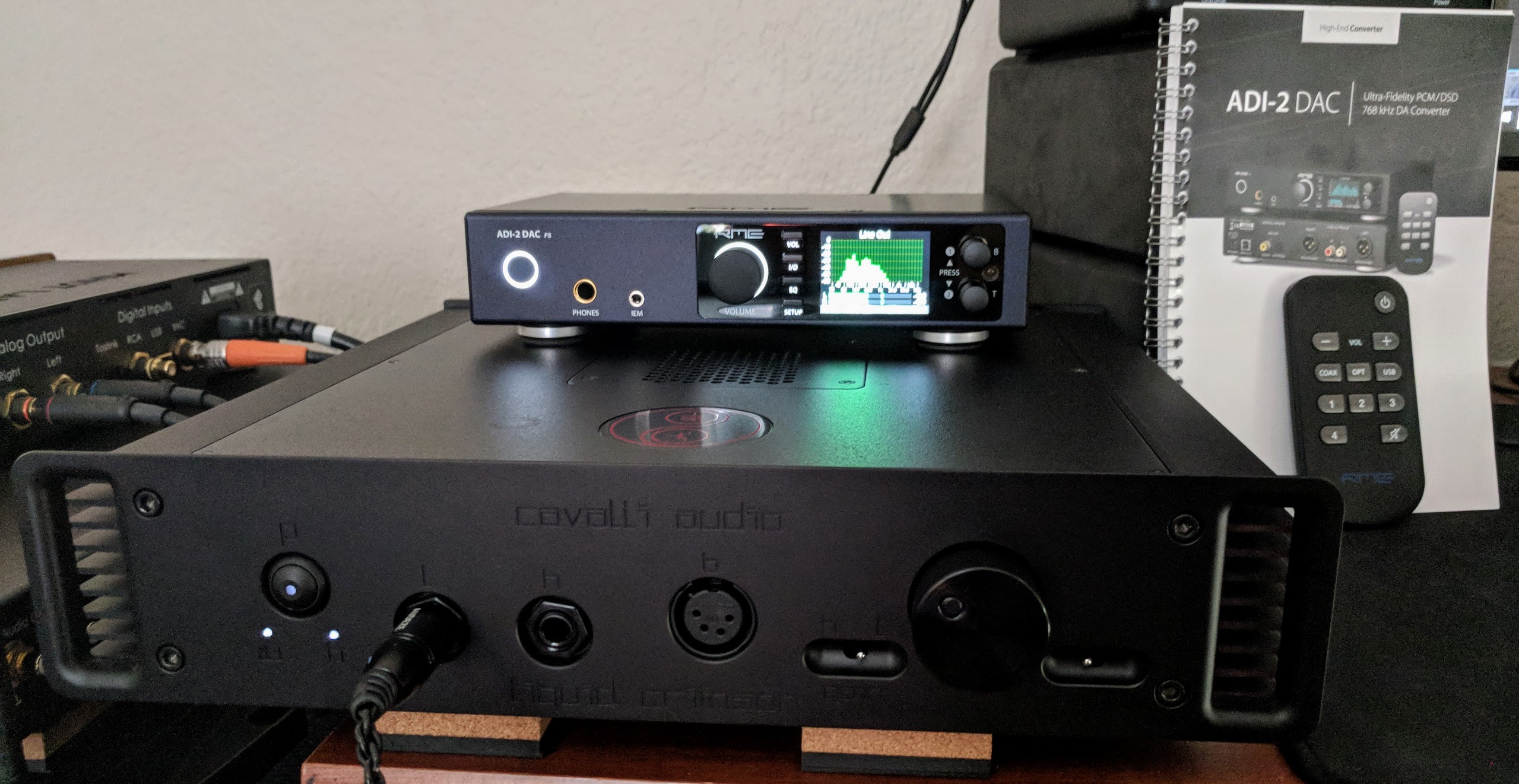 What dac chip does it use?

davveswe said:
What dac chip does it use?
Click to expand...

AKM AK4490, or at least the Pro version does. Would be surpised if they've changed the chip for this model.

As a long-time RME user I think I can explain this. It's not really a quirk, and it also is not the unit - it is the Windows driver, and the behavior is intentional. Every time you change the sample rate the driver removes all its WDM devices and installs new WDM devices that support (only) the new sample rate. Therefore you can not change the sample rate while using WDM with whatever software running in the background - desaster guaranteed.

This scheme had been introduced by Echo (as far as I know) and has been taken over by some other companies as well. It is a workaround for the sample rate control no longer possible from the record/playback app (since Vista, IMHO). It is unavoidable for multichannel and fully ASIO/WDM multiclient devices. Should also be mentioned in the manual.

Now the new DAC does only have 2 channels, so in my opinion a different scheme would be possible. But it uses the MADIface series driver, which happens to work this way. Changing that you would also loose the ability to use the DAC together with whatever other interface of RME's range supported by this MADIface series driver, and that's quite a lot.
Last edited: Jan 13, 2018 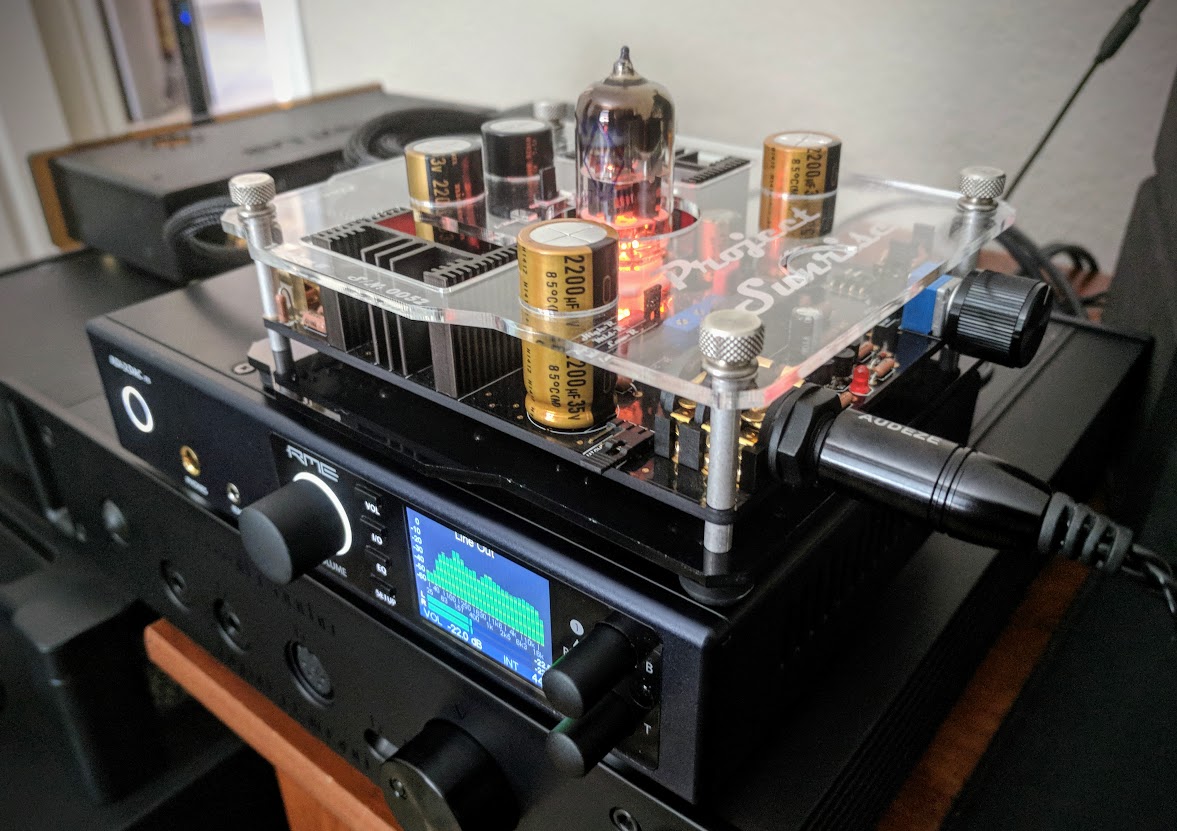 It's exceptionally clean while still alluringly musical. You can go from über clean solid-sate using the ADI-2 DAC's headphone output to added tube magic with the Project Sunrise III.

I'm using the Jan Meier crossfeed setting on the DAC as well as inverting the phase on the right channel for the Phase Reversal Trick (PRT not pictured; I swapped to the HD650 with XLR a few minutes ago).

The USB input on the ADI-2 DAC is very good. While I slightly prefer using the Lynx AES16e with it, it's really unnecessary for all practical purposes (no digitus, it's just a bit less delineated and deft with the "micro"-stuff).

The power--despite involving two switched-mode power supplies--is tremendously clean. The Noise Nuke is virtually as good as a linear power supply with the G2127 amp to my ears, and the internal power section of the ADI-2 DAC cleans up the power you feed it.

Noise floor is dead silence. I can max out the volume on the ADI-2 DAC and the Project Sunrise III and hear nothing without music playing on Audeze LCD2 Classics.

Engage Loudness on the ADI-2 DAC and you can knock the volume way down while working on something that demands focus without losing bass impact and treble sparkle.

For all but the absolute best recordings, this setup is as good with the Project Sunrise III as it is with the Cavalli Liquid Crimson (which pulls ahead on the most demanding music).
Basshead.Club
L

Nice report again! Would you mind to explain the Phase Reversal Trick (PRT)? I must have missed this as it doesn't tell me anything.
Last edited: Jan 14, 2018

Thanks for the reports.... I'm about to order one of these too so your impressions are very welcome. Though I plan to use it as a DAC/Pre with speakers.
Mac Mini > RME ADI-2 DAC > Hypex Ncore monoblocks > ATC SCM-11 speakers & C1 subwoofer

lowvolume said:
Nice report again! Would you mind to explain the Phase Reversal Trick (PRT)? I must have missed this as it doesn't tell me anything.
Click to expand...

@johnjen could explain it best.

@Torq created a thread elsewhere that explains it well including how to execute on it. To quote him:

Torq said:
In short, the idea is to more efficiently and completely utilize the full power capacity of an amplifier, and the available rail-to-rail potential difference/swing, by driving left and right channels in opposite phase/polarity within the DAC/amplifier, and then correcting phase/polarity before getting to the headphone (we do it in the headphone cable, with a simple adapter).

In theory, driving the channels in offset like this will cause less sag against each rail and draw current from both of them independently, rather than in a common mode. At headphone power levels, the relative power demand differences are not going to be huge, but then we’re not dealing with very much available power to begin with.
Click to expand...

The ADI-2 DAC makes it very easy to reverse the phase of one channel, and it does it in DSP before the digital to analog conversion, conferring the full benefits of PRT.
Last edited: Jan 14, 2018
Basshead.Club
L

Understand. But I don't think it makes sense to apply such an old school trick on a serious, professional year 2017 unit. Not only that the power supply is fully stable at any load and any volume (proof: the exceptional low THD under load like 16 Ohms), crosstalk is exceptional under load as well. And: RME uses multiple OPA1688 in their headphone output stage, which is a so called rail-to-rail op-amp. No way to get more out of it. You could save yourself the cable hassle...

The PRT is really for my amplifier that comes after the ADI-2 DAC, not the ADI-2 DAC itself.
Basshead.Club
You must log in or register to reply here.