The Atrox V2 is a Class A solid state headphone amplifier made by an engineer from Norway as a single artisan project. 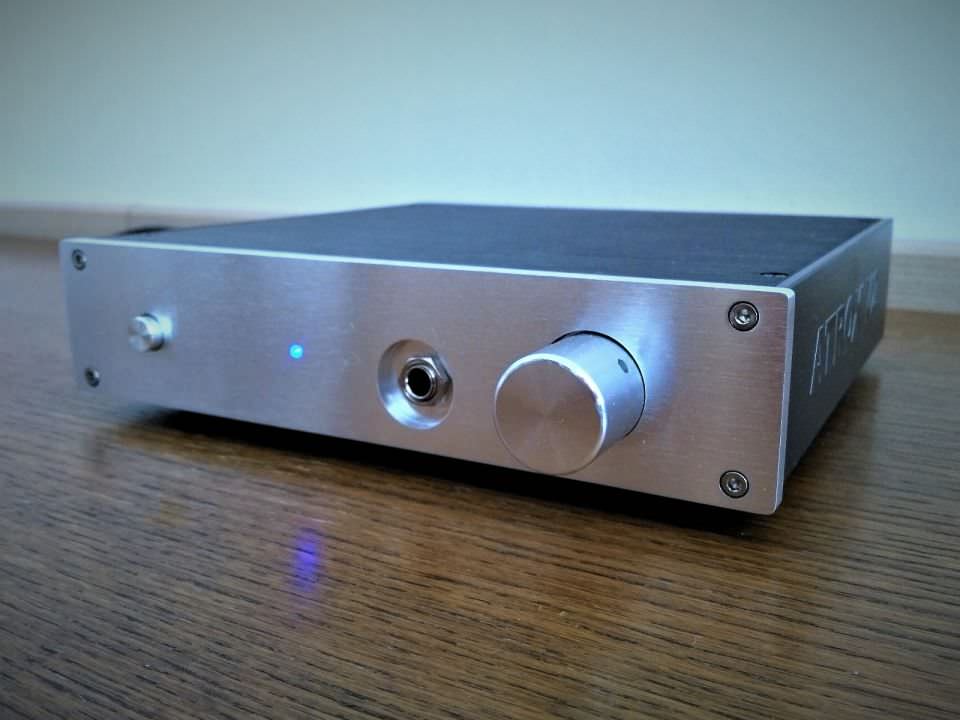 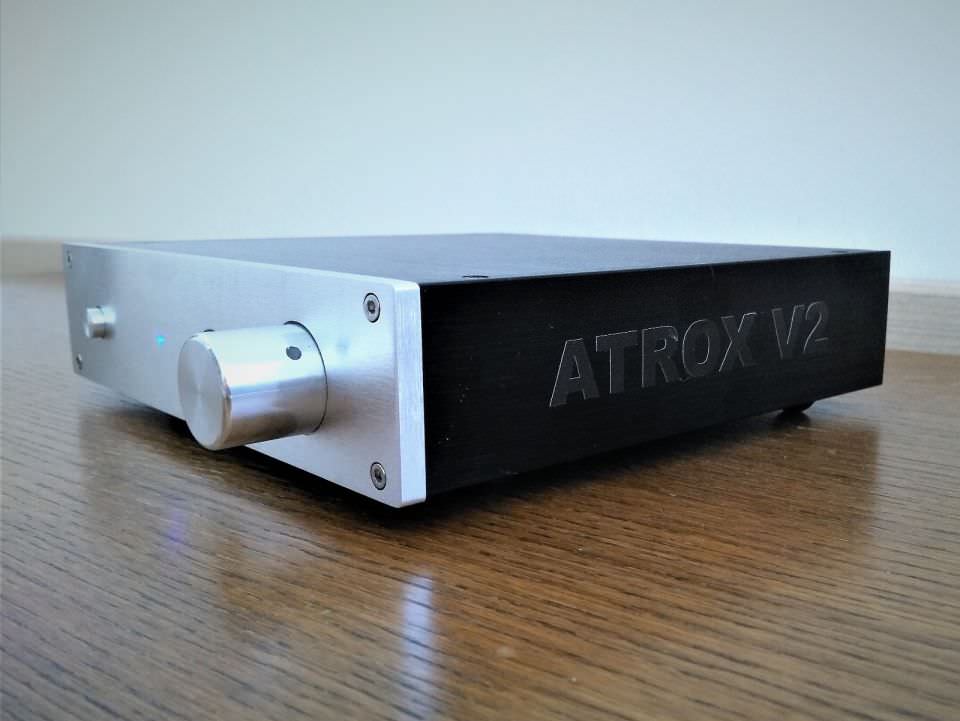 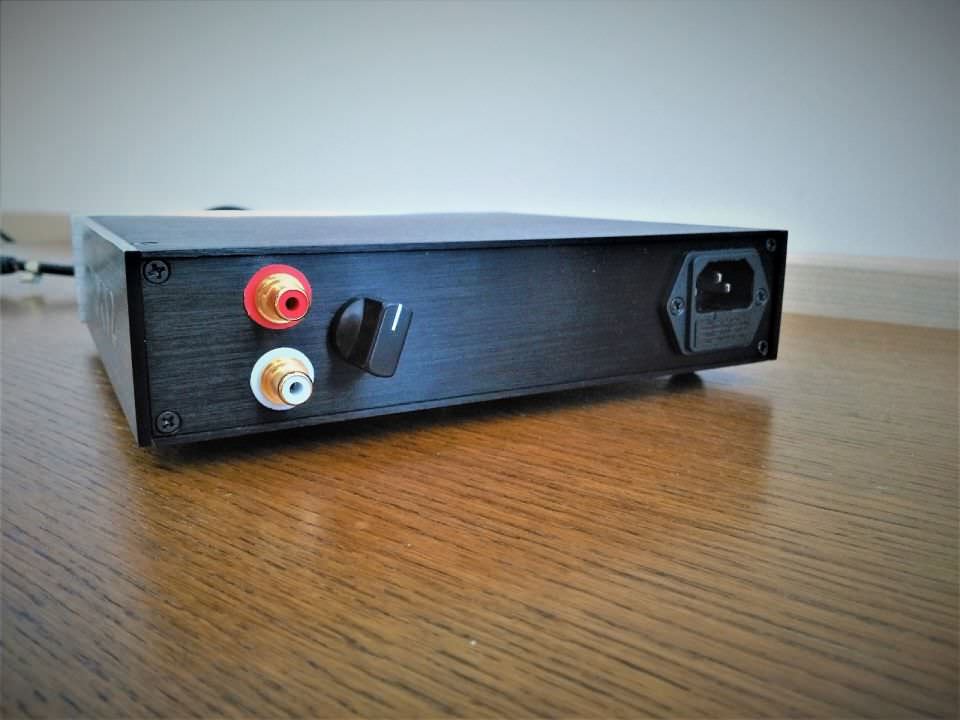 Ok, what are the specs?

What parts are used?

"Atrox V2 is divided into an input stage and an output stage. The input stage consists mainly of the high quality rail-to-rail operational amplifier OPA551 which has a THD+N of only 0.0005%. The output stage consists of a class AB push-pull transistor pair which are biased well into class A with a continuous current flow of 150mA leading to 15W of heat generation.

The power supply is made up of a 50VA +-18VAC toroidial Triad transformer with 4x2200uF rectifying caps leading to a maximum output voltage swing of +-25V. The input capacitors has a capacitance of 4.7uF making the amplifiers lowest crossover frequency of only 1.7hz, this is to make sure that the frequency response in the audible spectrum is completely flat.

To keep the output impedance as low as possible, no electronics are to be found in the output path other than a mechanical relay and thanks to the JFET input of the OPA551, the output offset voltage is less than 2mV. No shortcuts has been taken when designing Atrox V2. All of its components are bought from recognized and quality assured vendors. "


Where can I get one?

The creator of the amplifier literally just today put up a webpage for International customers. Here is the web adress

Ok, now for the review!


I haven't really dealt with powerful amplifiers before - my previous amplifiers have been a measly dragonfly red DAC and a Hegel HD 12 DAC with a 2.5V RMS. I have also spent some time with a Schiit Magni. Then again, all my headphones up until now have been low impedance, high sensitivity headphones such as the Denon AH-D5000, Fostex TH 900 and so on, so I didn't think I needed a more powerful amp. Until now. As you will see, the Atrox has impressed me a lot.

My setup is the following:

I am currently on day two of listening, well over 12 hours of listening at this point. Tonight as I write this review, I've taken notes from a wide array of musical genres. Here is the entire track list:

The Atrox V2 seems to be made out of stainless steel. At the front, you find a on/off button, a blue light indicator, a 6.35mm headphone out, and a volume knob. Everything feels high quality, the volume knob has some nice weight to it, as does the entire device really.

On the back, we find RCA ports and the gain switch. The gain switch can be changed on the fly and is very smooth.

This being a class A amplifier, it does get hot. This doesn't seem to be of any problem, but there isn't a whole lot of ventilation on the Atrox V2.

A tad bit leaner mid bass it seems, decay speed taken to another level. Significantly more sub bass to the point where on my bass test tracks (goose that got away, hitta vip) the th900 tried to hop off my noggin! Dynamics are significantly sharpened up, the entire sound is more cohesive, faster.

Initial impressions were very underwhelming - I couldn't really tell it apart from the Hegel HD 12 (1400$ DAC 2.5V RMS out). Then I decided to switch up the gain knob. The top step feels a tad bit too throttled, I just get past channel imbalance territory before it gets ear bleeding on the HD650 - however, when I tried the third (i.e the one before the top notch) - my mind was blown. I'd heard that the Sennheiser HD650, and a part of me wanted to experience this via the Atrox V2, but I kept my hopes in check considering that the people who talk about HD650s scaling are using amps worth thousands of dollars.

The HD650 through the Atrox V2 on high gain is just an incredible experience. All of a sudden, these headphones jump up to TH 900 levels of resolution. Sure, in bass, soundstaging and detail retrieval the TH 900 still got them, but the HD650 are now a superior listening experience on most music which I would never believe before I plugged them into the Atrox.

Describing amps can be a bit tough, but since I have two headphones I believe are almost the exact opposite of each other, I feel I can make a comment on the general sound of the Atrox V2. It has lots and lots of body, with an impressive bass foundation. I would say it is highly resolving albeit a tad warm. I felt it held the TH 900 treble back a bit, while the Senns kept their laid back sound signature but becoming significantly more lively without adding any edge to the treble. The Atrox offers sublime blackness on both headphones really. I remember going to the Hegel HD 12 coming from the Magni via DFR, and I experienced a big jump in blackness and seperation. That jump wasn't as significant as the jump from the HD 12 to the Atrox. It is almost eery at times - a significant number of tracks has changed their character for the better through the Atrox.

So to summarize, warm, big bass foundation (especially on high gain), higly resolving but laid back. Tor-Arne Forsmo, the guy who makes this amplifier say it is a neutral amplifier. I'd say its neutral if you like bass, if that makes sense. Sub bass gets a significant bump up, other than that this is just pure, clean and effortless amplification.

So to sum it up, the qualities I feel the Atrox V2 imbued in my TH 900 and HD650, while keeping the overall character of the headphones in mind:


What can I say? I'm blown away. I took a chance ordering from a one man factory, and it turned out to be a fantastic deal. Considering the price ($269) vs the specs, it was a no brainer. All that was left was for it to deliver in terms of audio, and it certaintly did that. Considering that this amplifier is more powerful than:

I view it as a complete no brainer purchase if you are looking for a powerful, no frills amplifier where all your money goes into sound quality and nothing else. No features, no brand, no aesthetics - Just fantastic sound.

I have had only positive impressions from Tor-Arne Forsmo from Forsmo Audio. He answered my every question regarding the amplifier and technical specs, hell he even gave me a power cord free of charge! I've heard from another head-fier, who purchased it that he changed it from 230V to 150V or whatever people use in Canada.

I really do think this is the best bargain in hifi solid state headphone amps right now. Its a niche product that is hand made by some guy in Norway, so it won't be the coolest thing to brag about to your friends - but damnit if it isn't absolutely awesome sounding. And at that price, its just not gonna be beat.

About the bump of the bass.. Are you referring more to solely the sub bass region or also the bass/mid bass? Or you meant that the sub bass goes lower than it has ever been?
Moreover, would you say the proportion of the bass is bigger than the mids and the highs?

The reason I asked is that sometimes I associated a neutral/neutral with a bit of warmth characteristics with a balanced or rather flat sound where there is no stand out/dominant freq (low/mid/high).

About the bump of the bass.. Are you referring more to solely the sub bass region or also the bass/mid bass? Or you meant that the sub bass goes lower than it has ever been?
Moreover, would you say the proportion of the bass is bigger than the mids and the highs?

The reason I asked is that sometimes I associated a neutral/neutral with a bit of warmth characteristics with a balanced or rather flat sound where there is no stand out/dominant freq (low/mid/high).

Sub bass mostly, but maaaybe a tad of warmth overall in bass.. I won't say for sure. It sounds a bit laid back compared to something like the schiit magni as its highs are less piercing. After owning it for some time, blackness, dynamics and control is what I'd say this amplifier has in spades.

Aradea said:
@Joong can you share a quick impression on the Krell KS5?
I believe you're referring to a clone version here
Click to expand...

KSA5 is powerful amp for planar drivers like LCD-2/3, He-500/6, or power demanding dynamic phones.
The highs are not smooth as H10 or Soloist, but good enough on planar phones (better on LCD compared to Soloist).
The lows are more presence in sub area like pipe organ's lower note in Saintsaen's organ symphony.
The mids are as good as those other amplifier.

Those qualities are based on my moded KSA5s.
Parallel connnections of stock capacitor with polyproprene capacitor with higher power caps than stock ones.
Rail VDC is as high as +/- 32 Volts.

Because of these quality, I sold Soloist and H10.

Interesting things are KSA5 is better with dynamic phones like Fidelio X2, which is surprisingly scalable with higher power off of KSA5.
I might investigated into the case of TH900, which is efficient phone but need more power for better control.

FastAndClean said:
i am waiting mine next week
Click to expand...

The post must be mighty slow where you are

gimmeheadroom said:
The post must be mighty slow where you are

haha, i got it and sold it because i moved from full size planars to IEMs only, but the Atrox V2 was very good, a bit warm musical sound and gobs of power
IDM is made to bend your mind, if you have one.
Share This Post
post-15707174
Post #11 of 13

FastAndClean said:
haha, i got it and sold it because i moved from full size planars to IEMs only, but the Atrox V2 was very good, a bit warm musical sound and gobs of power
Click to expand...

pofofo said:
I bet its going to be more than fine, with a whole bunch of spare power.
Click to expand...

Yeah the intention is to have more than enough amp for the future. My main setup is far away but in case I get some Fostex T50/60RP for here I wanted to have plenty of power.
Beer! It's what's for dinner... Sennheiser guy since 1980. The plural of vinyl is vinyl.
Share This Post
Reactions: pofofo
You must log in or register to reply here.
Share:
Facebook Twitter Reddit Pinterest Tumblr WhatsApp Email Link