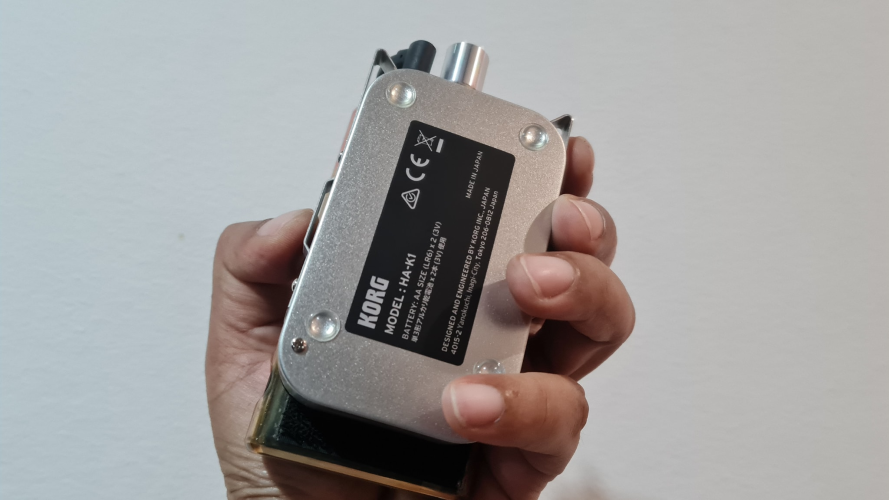 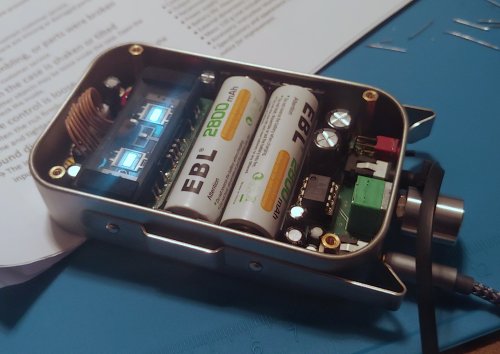 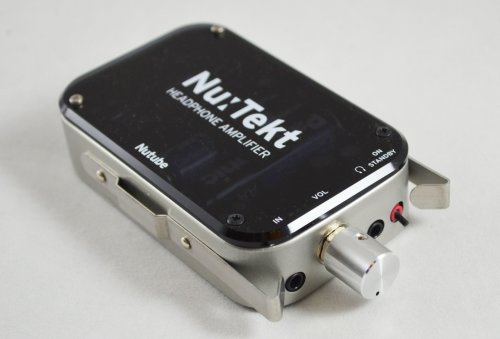 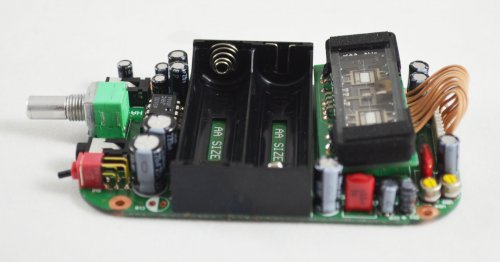 You are using an out of date browser. It may not display this or other websites correctly.
You should upgrade or use an alternative browser.
Portable Headphone Amp Kit with Korg NuTube

Flash back to mid-2017 and you may remember the super cool "NuHybrid" Headphone Amp that Pete Millett designed around the Korg NuTube. If you're not already familiar with the NuTube, the current model is called the 6P1, which is a thoroughly-modern, dual, very low power, directly-heated triode tube. The NuHybrid used the 6P1 as a driver tube for a desktop headphone amp with very good results.

Back to October 2018, Korg has not been resting on its laurels, and has released a couple of cool new DIY designs. Both make a lot of sense given the low power requirements of the NuTube: a portable headphone amp and a guitar pedal. Some of you may say "wait a minute! the NuHybrid was sensitive to vibration, I can't imagine it bumping around in your pocket or getting stomped on during a performance". I was thinking the exact same thing, however I'm pleased to note that Korg has completely eliminated this concern in the new portable headphone amp (the HA-K1) by mounting the Nutube off the main board and using a modicum of foam to dampen things.

Being the ravenous DIYer that I am, Pete was kind enough to send me an HA-K1 to play with. Included in a relatively non-descript box are the instructions in Japanese and English, several baggies with parts, the enclosure, a sticker, and a PCB which is semi-populated with SMD parts. This is similar to Elekit's portables that knock out some of the steps. I personally don't mind as I don't enjoy futzing with teeny tiny SMD resistors.

The case resembles an Altoids mint tin case in both size and material, which is commonly the enclosure choice for a CMoy. The top is a dark piece of translucent acrylic which has the labels for the controls printed on it. In the parts baggies are a variety of Nichicon caps, trim pots, standoffs, switches, a smaller PCB for the NuTube to mount on, and a couple of op-amps.

The instructions discuss the order in which the PCB is populated, and refer to a numbered bill of materials. There was an instance that I wasn't quite sure what the BoM was referring to e.g. "connector", but since there are so few parts to worry about it's pretty easy to just visually check the board and confirm. A couple of the parts need to be visually distinguished, like the codes on the side of the different value trim pots, and the solder eyelets are a little on the small size and close together, but there is nothing particularly difficult about the build. I would recommend having at least decent solder skills or plan to use some extra flux to ensure you don't bridge any eyelets accidentally. I also found myself using a solder sucker a little bit to tidy up the joints, but I'm more OCD than most

The entire build took about an hour and a half, and I like to take my time.

Once the build is complete, there are a host of fun little things to tweak like the internal gain, the load on the anodes, a bass boost switch, and choosing which op-amp you prefer. I found that I liked the load on the anode a little over halfway and the volume a little under halfway turned. I tried both op amps, liking the basic JRC for alternative rock with more electric guitars (overdriven guitar sounds more raw) and the Muses 01 for the indie rock I prefer which is more electronic and vocal based (smoother, more balanced presentation). The bass boost I liked better for poorly recorded rock that lacked body, but was a little aggressive with already bassy music.

So bottom line, is this piece of kit worth your time? If you enjoy tube sound and want it on the go, I'd say definitely. Overall the sound is very full and engaging, warm, dynamic and non fatiguing, just the way I like it. It's a little more lush than amps like the Chord Mojo and iFi xDSD. It is also probably the lowest cost portable tube amp on the market that is properly implemented and doesn't suffer from any microphonics what-so-ever.

If Korg releases a future (or alternative) model, I'd like to see a built in USB DAC so we can bypass the phone's internal amp, but for the price and the sound, it's a good value.

I'm of the understanding that the only American distributor at the moment is Pete Millett, and they are available via this eBay page. For full disclosure, I have no business affiliation with Korg or Pete Millett. The review sample was provided to me for evaluation / review purposes.

If you decide to build one, please feel free to post in this thread. I'll try and answer any questions that come up.
Last edited: Oct 30, 2018
Headphone Cable Aficionado

Thats a nice update to the kit, i have the original nutube kit and i still haven't put it together lol.
A

Didn't find it yet on Petes eBay store. Any idea on the kit price?

It should be up within the week if I'm not mistaken. Pete said the price would be $249. While that may be a little more than some other DIY portable kits, remember it includes the $50 NuTube and a $40 op-amp (MUSES 01 made by New Japan Radio), as well as the pre-populated circuit board, so I believe you're getting a good value for the dollar.
Headphone Cable Aficionado

alpha421 said:
Didn't find it yet on Petes eBay store. Any idea on the kit price?
Click to expand...

I have two eBay stores... it's here: https://www.ebay.com/str/nutubeusstore

lambdastorm said:
I really hope there's a desktop version of this amp. Amazed at the idea but not too thrilled I'll need spare batteries all the time.
Click to expand...

Maybe look around or use the search tool?

I picked up this kit a couple of months ago - really simple fun build and it sounds excellent, especially for the money. I find it does a great job of cutting off the “digital edge” from the FiiO Q5s.

Ny only real complaint is how hard it is to change the batteries. You have to unscrew the lid and swap them over. This lead to it sitting on my desk not getting the play time it deserves... so, I figured out a simple mod so I could charge it from USB.

little rough around the edges, but it works and works well. Here’s a few pictures of the insides: https://imgur.com/gallery/iAB5UL0
Listening to: https://last.fm/user/baseonmars
At home: Wood, Stax and tubes.
On the go: AK SP1000M ⇢ Audio 64 A12t
Check my profile for complete gear listing.

Ordered the kit off eBay and built it while binged watching Netflix Cursed episodes. I think it took me a total of about 2hrs to complete it. I was a little worried that my kit was missing a capacitor as there's a spot on the PCB that has markings for it. But after reading the instructions thoroughly, it was meant to be unpopulated.

I've yet only listened to it with the muses01 op amp and I must say it sounds wonderful. It really does have that rich, warm gooey tube sound. Similarly to my schiit lyr 2 with genalex gold lion tubes. The bass boost switch is a welcomed feature and I don't mind that it is located inside the case as I just leave it on anyways. Really got this kit just to practice my soldering and love for battery powered audio devices. Never really expected the sound quality to be this great and not sure why this thing isn't as popular as say the Alo Continental or even the chifi Little Bear portable tube amps.

Looks like you did a great job! you can tube the tonality quite a bit by adjusting the bias point of the NuTube - more or less harmonic distortion. So airy to neutral to a warm hug.

The MUSE01 is def the better of the two for me. This amp can also be greatly improved with a potentiometer upgrade - but not for the faint hearted - I had to widen the hole in the case and managed to lift a trace desoldering the old one when I put in an ALPS pot.

Enjoy, you've got yourself a fantastically fun amp - I agree, it's a real sleeper.
Listening to: https://last.fm/user/baseonmars
At home: Wood, Stax and tubes.
On the go: AK SP1000M ⇢ Audio 64 A12t
Check my profile for complete gear listing.

Is there any sort of adapter anyone can recommend that will take the output impedance from 10-15Om to around 1Ohm or less? I have low impedance iem's but am interested in trying this little NuTube out

reg66 said:
Is there any sort of adapter anyone can recommend that will take the output impedance from 10-15Om to around 1Ohm or less? I have low impedance iem's but am interested in trying this little NuTube out
Click to expand...

The source impedance is basically the resistors in series with the output, between the opamps and output jack. You can replace R29 and R30 - now 10 ohms, 1/4W - with something smaller.

pmillett said:
The source impedance is basically the resistors in series with the output, between the opamps and output jack. You can replace R29 and R30 - now 10 ohms, 1/4W - with something smaller.

Many thanks for the detailed answer. The iems are Audiosense T800 which are, i think, 9.2Ohm. So, in an ideal world I'd need around a 1 Ohm impedance. But like you say changing things, especially that low, may have a negative impact.

Maybe I'll stick to my original plan and think about saving up longer for the Cayin N3Pro, which have 0.6 and 1.0 Ohm. I'd just like to give the tube sound a go with iem but saw a review on YouTube that the bass, in his preference, was too much. That made me look elsewhere... 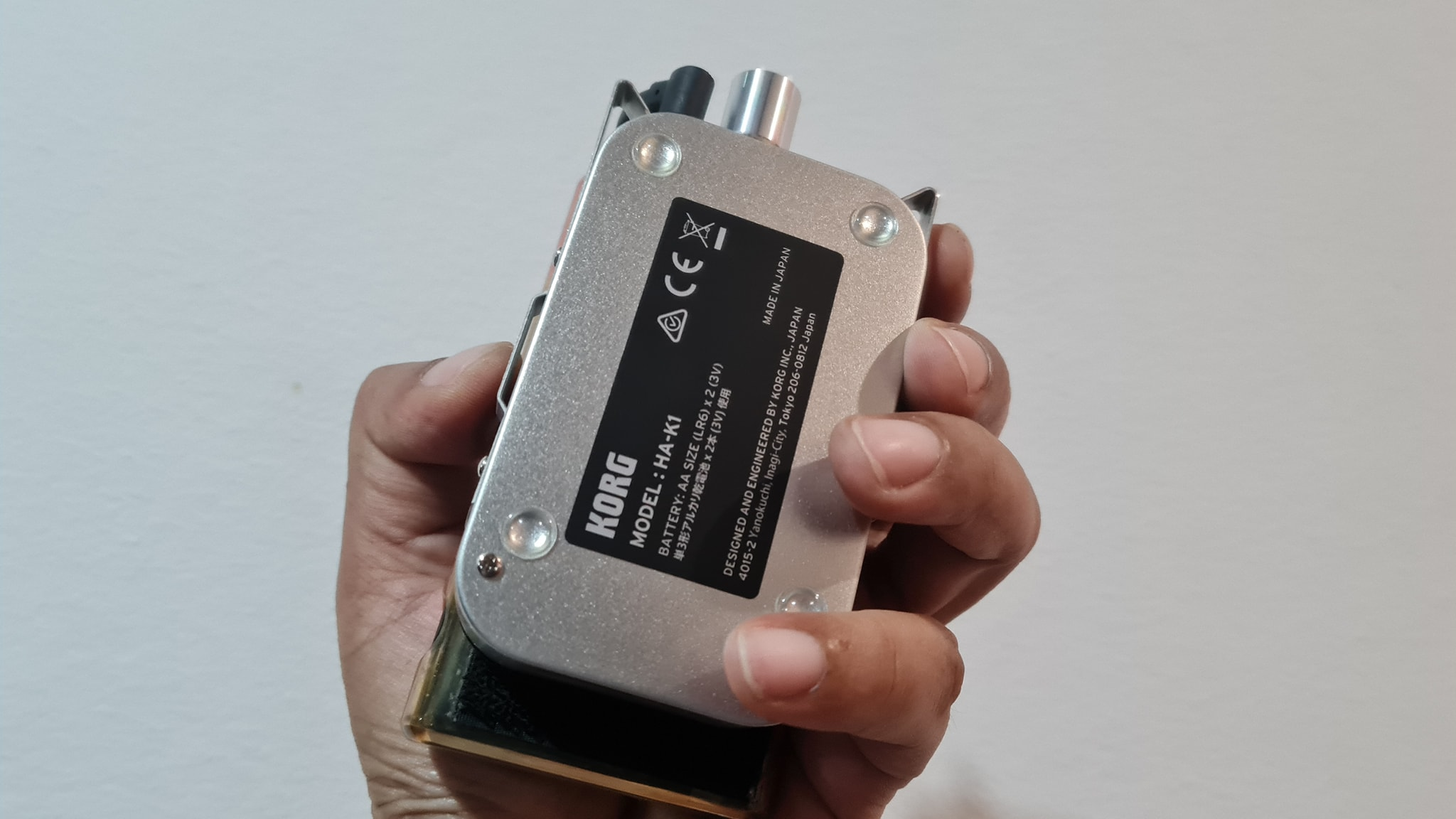