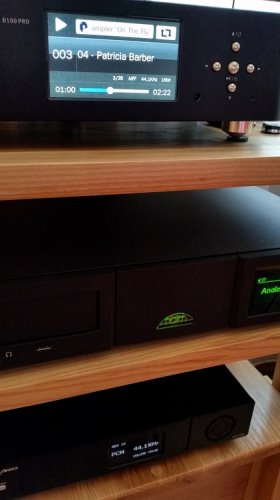 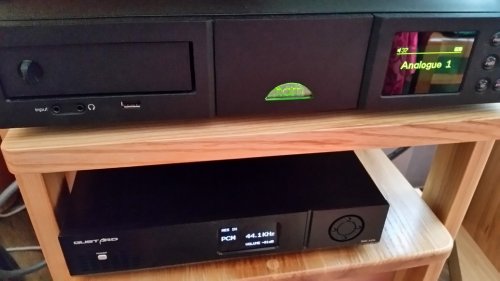 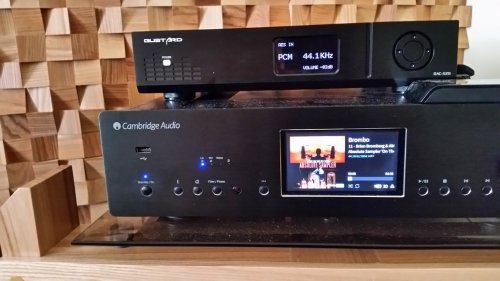 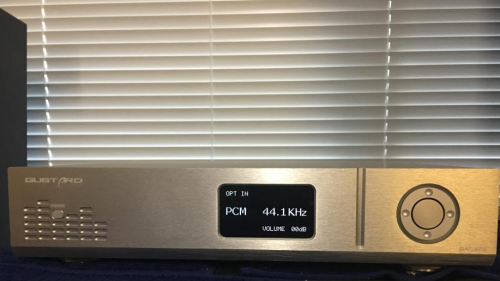 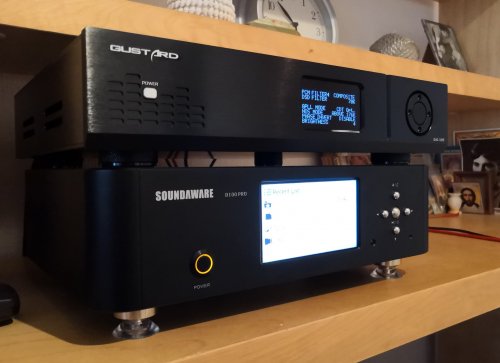 rafabro said:
Will you write some short review?
Click to expand...

How's the display? It looks very readable and clear in your picture, but given how washed out that Soundaware screen looks, I don't want to put too much faith in the photo.

The case looks gorgeous though.
Last edited: Apr 22, 2019
Out of all of my gear, what is currently getting most of my listening time is:
Benchmark DAC3-B ---> Benchmark HPA4 ---> Audeze LCD-X or Focal Clear

But please, write some words. Videos are...

In Gus we trust

The star of Gustard has risen, imho, this year with a new U16 USB interface built on the ESS Technology ES8620 USB-chip, which deserved a warm welcome from the world audio community. For symbolic money, a quality product was revealed to the world, playing not just beautiful sounds, but playing beautiful music. Almost simultaneously, a new DAC was announced, built according to new philosophy and principles of Gustard audio engineers. 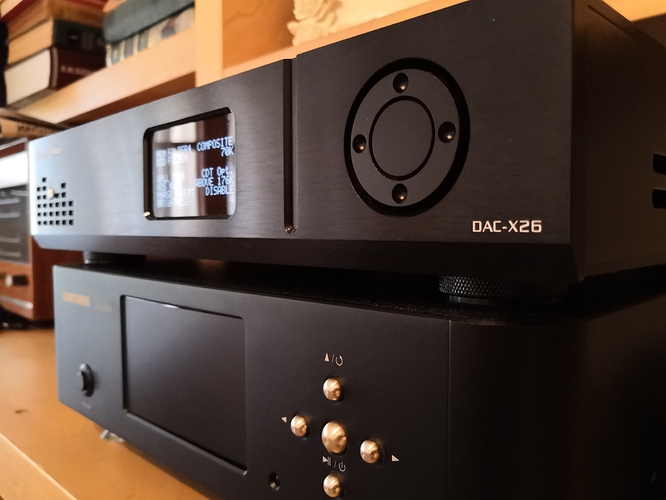 Of course, the announcement of X26 has interested many, including me. What was the result? Is U16 an accidental success or a next stage of development? Will the new DAC repeat the success of the U16? Will the ESS Sabre chip finally play as it should? 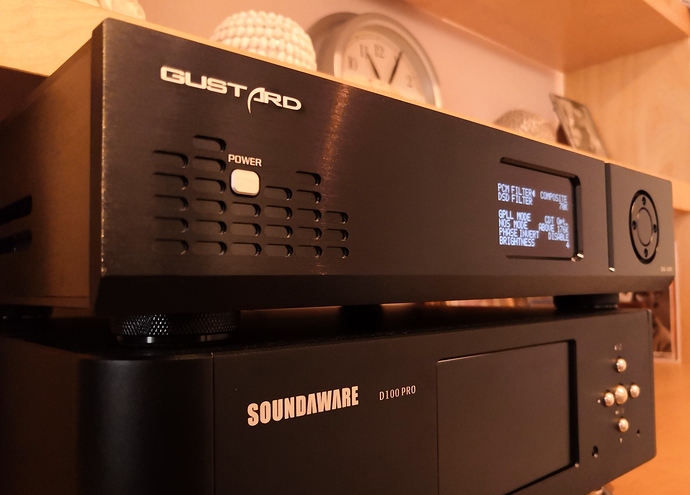 I believed that Gustard will succeed, that the company's engineers know what to do. And my faith strengthened when I took out of the box a new X26U. 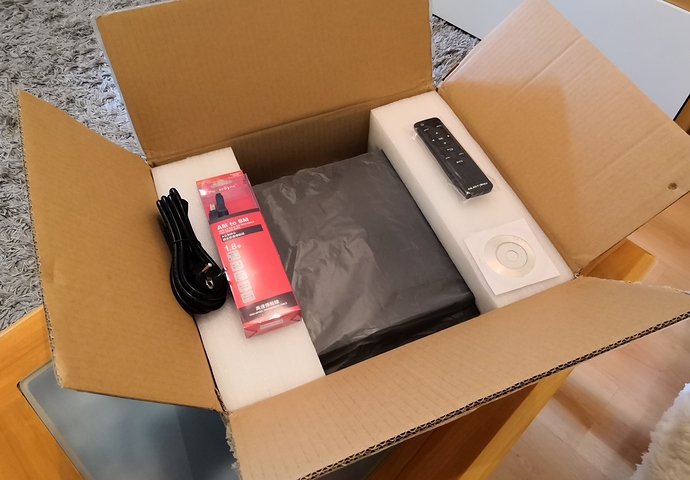 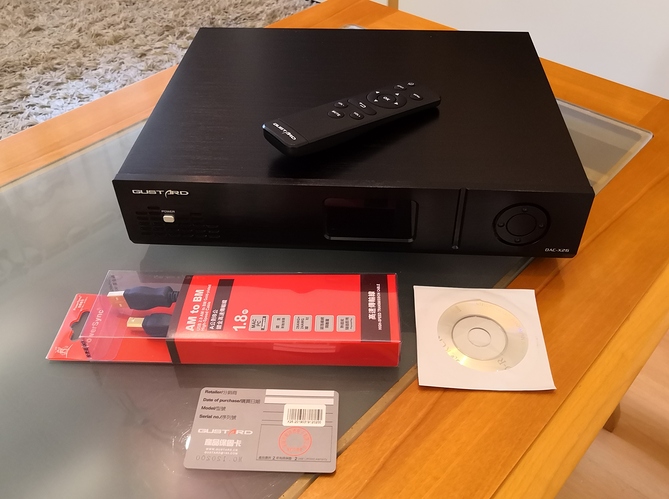 I like the new Gustard design. Everything is done concisely and looks complete, modest and tasteful. This is a 7-pound monolith of aluminum, but it looks elegant and stylish. Build quality is traditional at the highest level. 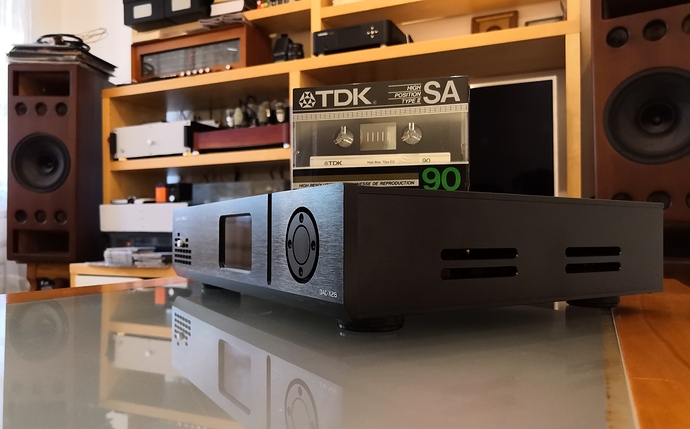 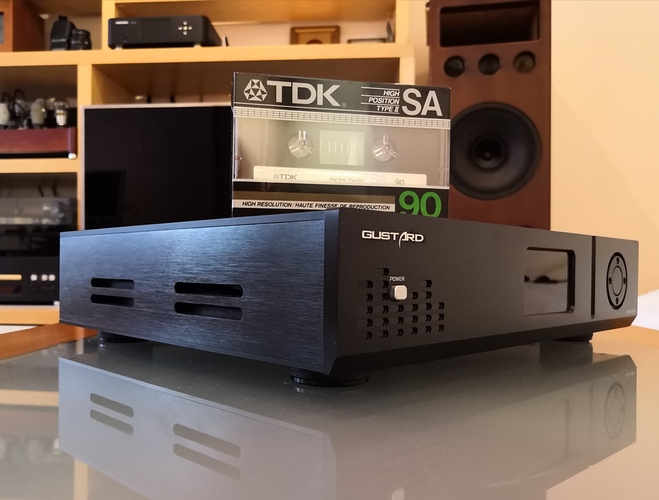 All controls are in place, the buttons are nicely pressed. Wide ventilation holes are located on the case sides. Attention please, the device heats up, imo, to 50 degrees Celsius. Don't install this DAC in a closed rack and don't cover it while working! 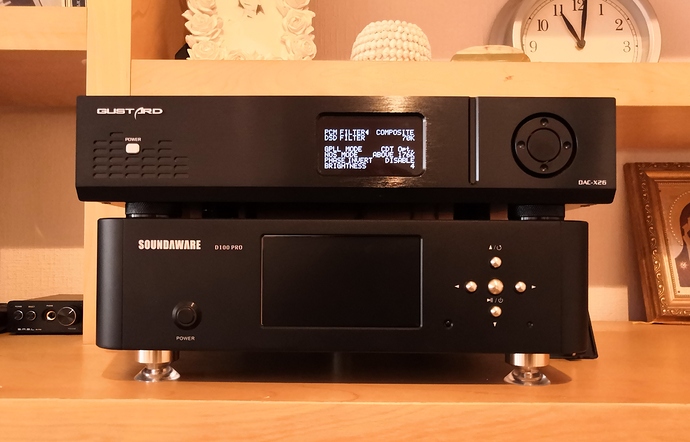 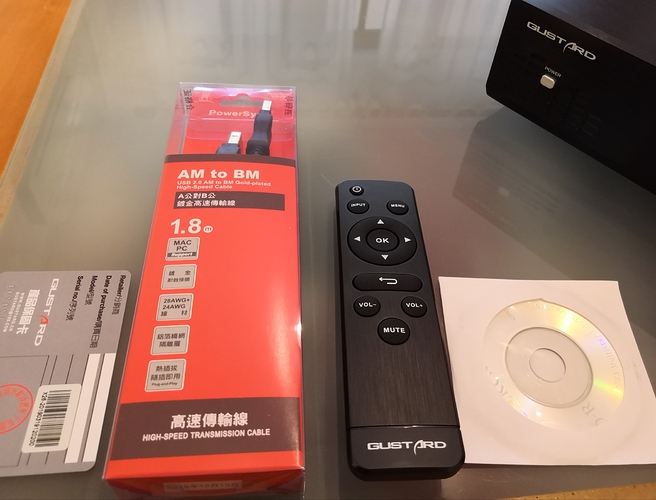 The power switch is located on the left side of the front panel. The unit supplied by hq B&W text screen that is perfectly readable from different angles, and joystick control is located to the right of it. The middle button brings up the menu and enter the features, the other buttons moves the cursor, switches the digital inputs and digital attenuator. 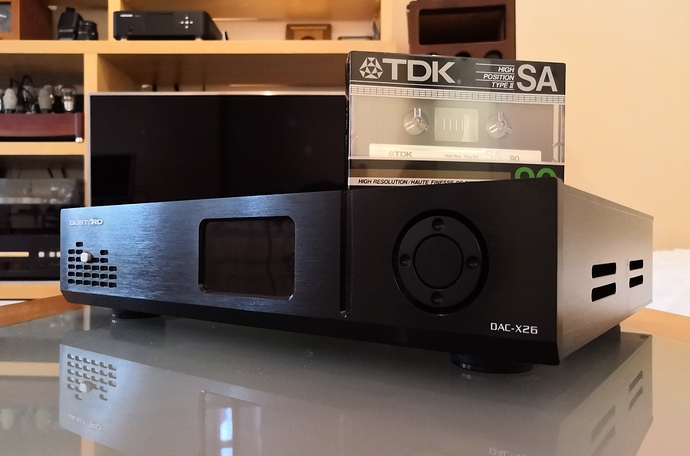 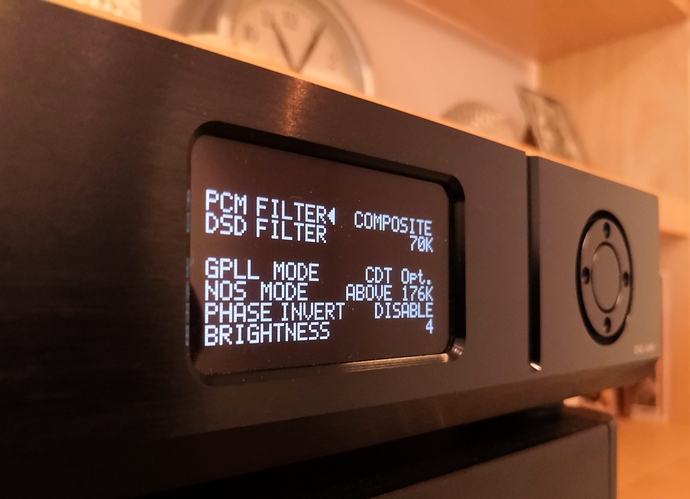 The back panel contains all the necessary digital inputs, including IIS input, as well as balanced and unbalanced analog outputs. 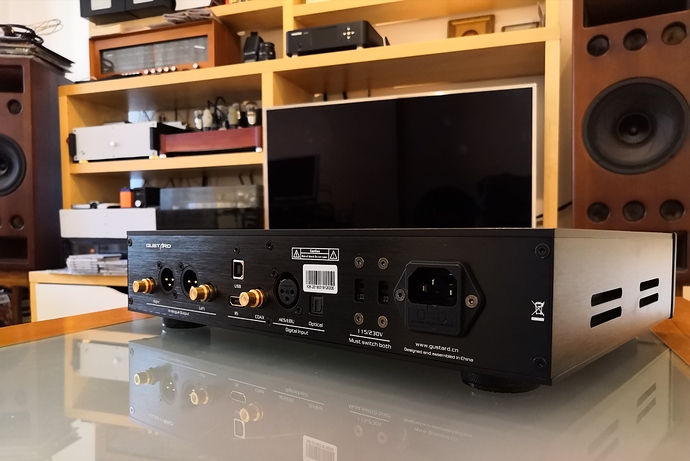 The feets are reliable, anti-slip, all screwes are tightened securely, the unit builded like a battle tank. 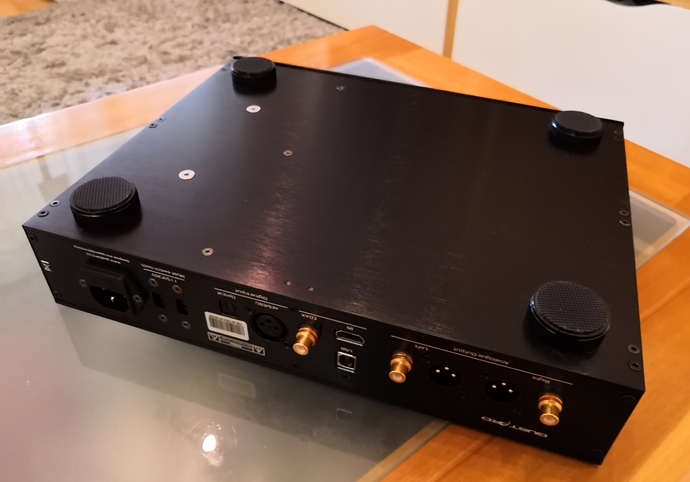 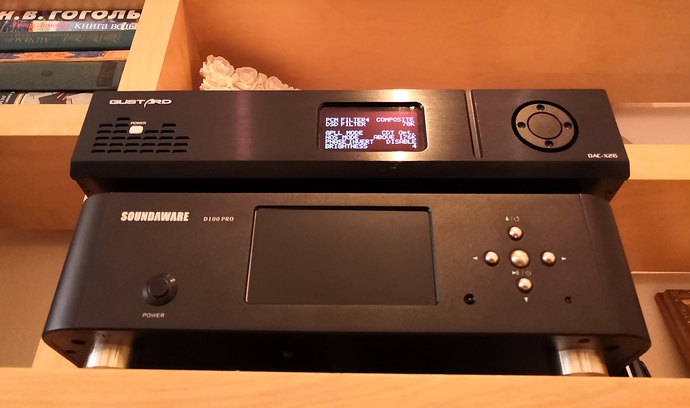 The X26 was installed in my single-ended tube triode system. Fullrange 10-inch paper cone speakers (97db, 8 ohms) in multilayered boxes with symmetrical horn resonators. The weight of one speaker is about 40 kg. All cables handcrafted by me of Western Electric ancient single core copper wires. 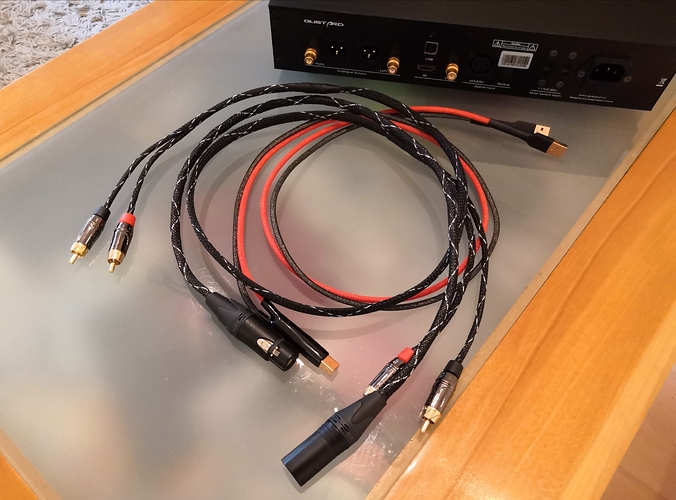 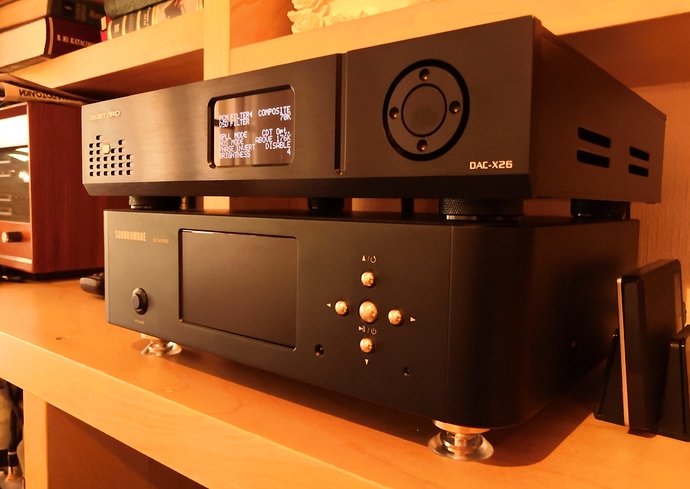 To say that the DAC is surprised me, it means to say nothing. In general, this is an ESS Sabre DAC with a sound signature of R2R DACs. Somehow, the Gustard guys are managed to combine the advantages of a multi-bit DACs with advantages of a delta-sigma DACs. It seems that Gustard engineers took all the good from both types of DACs and discarded all the bad. The analytical cold ESS sound, it's excessive resolution, oversaturation and insufficient dynamic range have gone. At the same time, there is no blure effects and no resolution lacks of R2R DACs. The sound is very natural, airy and inspired!

The soundstage is deep, layered and perfectly balanced. Musical instruments, voices are recognizable and natural, sound objects are correctly located inside the scene.
Attacks are fast, and fades are long. High dynamic range and a noticeably higher resolution than the R2R DACs I've heard. No fatigue, no "digital" effecs in sound.
Superblack background. The device is very musical and intended for a serious listener. It sounds reference, imo.

High resolution formats (PCM768 and DSD512) are reproduced correctly. The inputs and outputs are hi-quality, the differences between them are minimal. USB=audio is similar to the sound of the U16, but it is a bit weak compared to classic digital inputs. 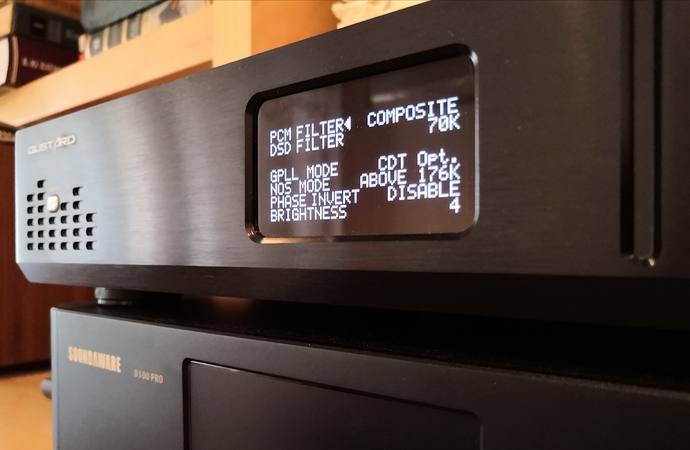 Gustard engineers have made a great sounding DAC. Undoubtedly, this is pretendor for the title "best DAC of the year" in the weight category up to $2500. Bargain! Surely recommend X26 for listening and buying, I really liked this DAC!

I was looking at some impressions about the X26 on the site where mean, judgey people go to discuss audio, and someone mentioned that high latency with this DAC makes it sound 'off' when using it for movies and such. Can anyone confirm or dispel this issue?
Out of all of my gear, what is currently getting most of my listening time is:
Benchmark DAC3-B ---> Benchmark HPA4 ---> Audeze LCD-X or Focal Clear

phthora said:
I was looking at some impressions about the X26 on the site where mean, judgey people go to discuss audio, and someone mentioned that high latency with this DAC makes it sound 'off' when using it for movies and such. Can anyone confirm or dispel this issue?
Click to expand...

phthora said:
I was looking at some impressions about the X26 on the site where mean, judgey people go to discuss audio, and someone mentioned that high latency with this DAC makes it sound 'off' when using it for movies and such. Can anyone confirm or dispel this issue?
Click to expand...

I'm using X26 for movies via Optical input and don't have any issue.
Click to expand...

Thanks! I wonder if the OP had some settings engaged that produced the latency. Anyway, I won't be gaming so tens of ms won't matter to me.
Out of all of my gear, what is currently getting most of my listening time is:
Benchmark DAC3-B ---> Benchmark HPA4 ---> Audeze LCD-X or Focal Clear