text from the manufacturer

The UE 6 PRO is built to sound great and bring energy and fun. The hybrid design with two dynamics and one high balanced armature give this monitor a warm natural sound with great low end and with great air and clarity on the top. Is very smooth and has no hints of harshness. It is great for drums, bass, and audiophiles looking for a smooth mix that hits on the low end

Pros: excellent detailed and clean bass, which has a sub-emphasis
very musical and fun, yet with an absolute audiophile demand
large, deep and wide stage
Cons: The mids could be a bit more crisp and direct
slight sibilant accentuation and rarely peaks
Rating: 9.5
Sound: 9.5

Intro
After the UE RR, here comes my next favourite from Ulitimate Ears. This one is the UE 6 Pro, who has really taken a liking to me! There are still a few little things that bother me, but the UE 6 Pro comes closer to my ideal. The complete bandwidth is convincing. For me the Ultimate Ears IEM with the best price/performance ratio.

According to UE, the UE 6 Pro is especially designed for drummers. In general, UE sets a goal for tuning with every single in-ear. This is sometimes more, sometimes less well realized, but here the concept has been fully successful. Especially the bass section is very appealing.
Also here I would like to thank R + R Sonic for providing the demo IEM. 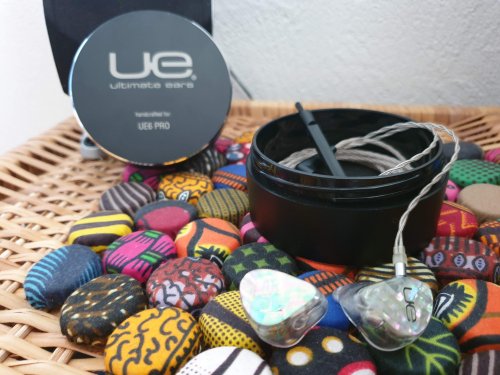 Handling
>> Identical to all tested models of Ultimate Ears <<

The UE 6 Pro is basically a custom IEM, but can also be manufactured as a universal IEM. If you decide on the custom variant, you will receive an individually adapted in-ear based on a personal ear impression, which is also only "compatible" with your own ear canal.
With universal IEMs, there is no way around a silicone or foam attachment (which is of course included in the scope of delivery in this case), but this can influence the sound characteristics and the sound can be falsified both positively and negatively.
The scope of delivery consists of a cleaning tool for the sound tubes, a removable cable, which was especially developed for stage use and the IEM itself. All this is in a screwable, round and black metal case, or square folding case, where the respective name of the owner is engraved.

Ultimate Ears relies on a specially developed IPX connector in their products. This connector is not compatible with MMCX or other connectors. I personally find it better than the one I know so far. It's more compact, sits bombproof and is easier to detach than the MMCX. The tight closure of the two connections (male/female) prevents moisture or dust from entering the connection, which is very important for stage use.
The cable is available with or without ear-loop, clear or black, and with a length of 125 or 160cm. There is also a balanced version (4-pin 2.5mm mini-jack) and a Bluetooth cable incl. remote for telephoning and controlling the Smartphone / Player.

With a custom IEM you don't have to worry about the fit, comfort and isolation. No matter which acrobatic exercises you perform, the IEM will not move from the spot and will also isolate you almost completely from the outside world. If something does pinch, or an adjustment is necessary, you can have it done free of charge by the respective distributor, or directly by Ulitimate Ears.

The cleaning tool is not only practical, but also really necessary, because as with many universal IEMs by now, there is no protection (mostly by a metal grid) in the sound tube, so earwax and dirt can get into the in-ear more easily. For the careful user cleaning is certainly not a foreign word, but it should be mentioned nevertheless.

The design of the UE 6 Pro is individually left to each user. What remains the same is the transparent 3D-printed housing with a view of the inner workings, but with the faceplate you can let off steam to your heart's content and the ear side is individually made to ear impression anyway. 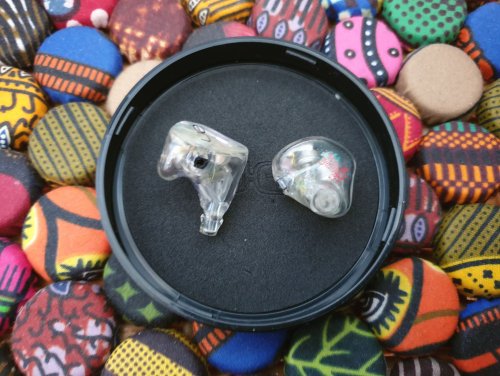 Sound
Many purists are sure to clench their hands over their heads right now and ask themselves how I can put the UE 6 Pro on a par with the UE RR in terms of sound quality. I can well understand this, because the UE 6 Pro is certainly not a reference, but that's exactly why I love it.
With its musical, open and direct way it is my personal reference, or rather my preference, and without any problems it ranks right at the top of my (C)Hi-Fi-Olymp.

The bass is just the way I like it and also the best I've heard so far. Quantity and quality are in perfect harmony. The UE 6 Pro was, as mentioned at the beginning, especially designed for drummers and beat production. Nevertheless, the UE 6 Pro is not a bass IEM, but an IEM where the bass plays with a slight increase in volume in a way I would call natural, especially when playing drums, first of all the bass drum. The UE 6 Pro has a strong depth as well as a dry and punchy humour. If you didn't know any better, you could also suspect a BA driver with its agility and cleanliness, but you quickly notice from the better dynamics and frequency range that it is a dynamic one. It always stays controlled and doesn't exaggerate with a higher output than intended, at least in my world. Bass heads it certainly does not satisfy.
I can't find anything here that bothers me or that could be criticized. 10 points

The mids are just as powerful, dynamic and warm and are reproduced by a separate dynamic driver, as is the bass. In a V-signature, I would have expected them to be a little further into the background, but this is not the case. They are more on par with the bass and treble in terms of quantity. I love the voice presentation of the UE 6 Pro. I also like this one on the ORIVETI 500, which gives it a very intimate and emotional response (positively meant). What is very noticeable is that the UE 6 Pro sets the voices higher in comparison to the OH500, i.e. in the location they sit a good 5 centimetres above those of the OH500. This opens the stage immensely and also provides more space in the separation. In any case, it's a matter of taste and I like both approaches depending on the music content.
Why not get a better score? Well, sometimes I would like a bit more body in the voices and would like the mids to be a bit more pithy/cracky. In addition, the UE 6 Pro is not completely free of peaks and doesn't leave the sibilants untouched. They can also be easily pulled down by lower input. But they reach almost the same level of detail as the RR and are also very airy and transparent, but therefore they are not easily forgiven by weaker audio data.

The highs are very similar to those of the RR, although a bit more raised. In frequency response comparison they are almost congruent beyond the 5-6 kHz mark. This doesn't have to mean that they sound the same, but in this case, they mostly do. In terms of quality they don't take anything away, but you can tell that with the 6 Pro we are moving in a slight V-signature in contrast to the RR, and the trebles stand out a bit more. This happens, however, without creating additional hardness or becoming tiring. For this, the music content must already be very much in favor of this. As with the RR, the trebles have a very good extension and even fine micodetails are revealed effortlessly.

At the beginning my first impression was that the stage is a bit one-dimensional in width, but far from it. Of course, the musical input must also provide the template, but even with titles I know in and by heart, a new complexity suddenly reveals itself in the stage, especially horizontally. The generated 3D image is really great and doesn't have to hide behind the RR, on the contrary. I think this is the strength of the UE-IEMs in general.
Speaking of input: the UE 6 Pro requires a bit more power to reach its full potential. If it gets too little of it, he becomes more introverted, especially on stage. At the right operating temperature he opens himself up and shows what he can do. 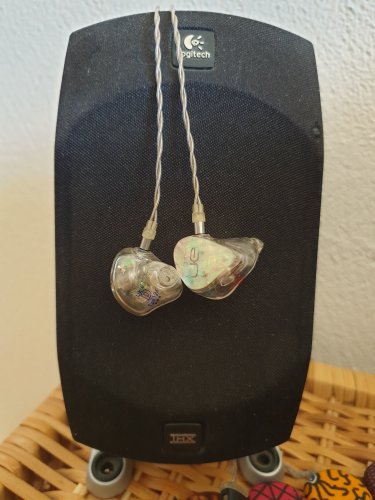 Outro
The UE 6 Pro currently entertains me best from Ultimate Ears and also fulfills the audiophile demands just as completely. Apart from the professional field of application, it is simply fun to listen to music with the UE 6 Pro and to look at it analytically. Furthermore, the UE 6 is not recommended for drummers for nothing. The bass is extraordinarily level stable and, above all, despite its power, never impure or overpowering. It always finds the right balance between quality and quantity in a very natural way. Okey, I admit that the sub range is already more raised than natural, but that's the way I like it

Since I've been tempted for quite some time to call a custom IEM my own and I'll have a little money on the edge one day, the UE 6 Pro would be my first choice at the moment.

The UE 6 Pro does not end the search for the perfect in-ear for me, but unlike other things in life, the search for such an IEM does not automatically mean that I want to find it

To finish it philosophically:Also in life you should perhaps reflect on what you already have, because then you will realize that actually many things are already perfect!


!!! The pictures do not show the original product, but are specially made universal demo receivers from Ulimate Ears !!