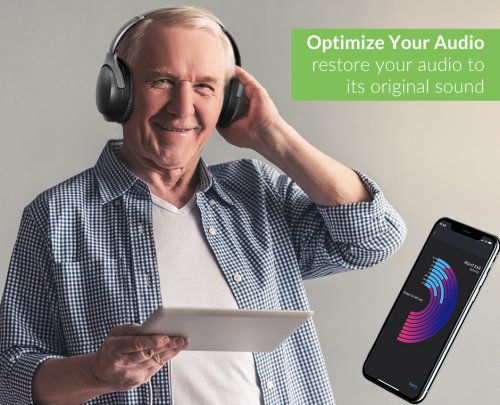 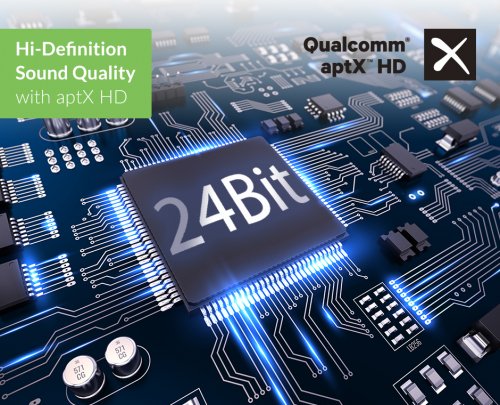 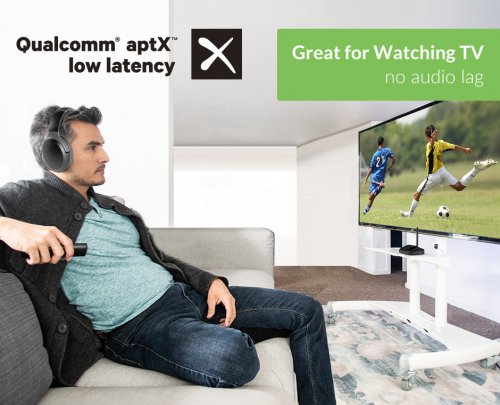 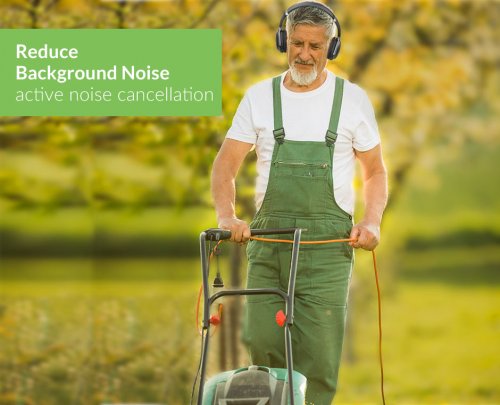 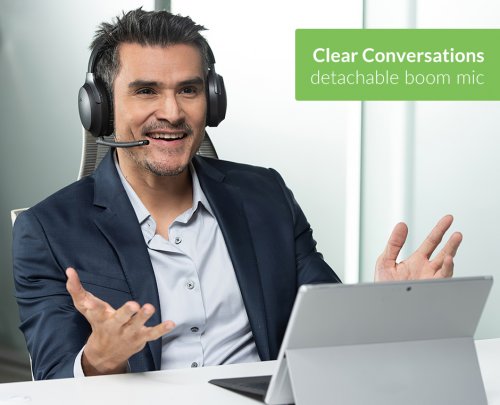 Intro
AVANTREE may not be a household name to everyone. They are a company that specializes in various audio products. They have some Bluetooth speakers, headphones (with and without Bluetooth), and IEMs in their portfolio. I haven't had many opportunities to test their products yet, so my experience with the company so far is rather modest. However, one thing that runs through their products like a common thread is the somewhat exaggerated bass emphasis, at least as far as their headphones and IEMs are concerned.

The ARIA ME is one of their latest BT over-ear models with some very interesting features. One of the special ones is probably the adaptation of the sound to the user's hearing ability, which is determined via APP using test frequencies.

Handling
The ARIA ME is a typical BT headphone in terms of design, as it is often seen from other manufacturers. A quite functional design has prevailed here over the years and is picked up again and again.
It sits very comfortably, as the ear pads are neither too big nor too small and enclose my entire ear. Unfortunately, I do bump the inside slightly, which creates a bit of pressure in the long run.
The headband is quite sparsely padded, but in the end, this is not more elaborately made on the TEUFEL REAL BLUE, or SONY WH-1000XM3/4. However, there is one circumstance with the ARIA ME that I find somewhat annoying. The ARIA ME is not padded in the middle of the headband, as this is where the connectivity to the included headphone stand with built-in charging function is located. This ensures that the padding in the middle falls away and creates a solid point, which I also notice after a while (I'm not blessed with a particularly large amount of hair). But that's complaining on a high level, because the wearing comfort is good in total and I can also use the ARIA ME for several hours.

The generous battery life also ensures that. I easily get 18 hours (without ANC) at high volume. As a codec, the ARIA ME not only supports AAC and SBC, but also aptX (HD & LL), which ensures a higher data rate. BT 4.2 is no longer the current state of the art (BT 5.2), but I cannot detect any connection problems. Even with 2 walls in between, I still have a stable connection at about 10m (laptop).
Another nice feature is the use of the included "boom microphone", which can be connected via the 3.5 jack connector. This provides much better speech intelligibility and can also be useful for gaming and in the office.
In the scope of delivery we also get a 3.5 mm cable, a charging cable (USB-C) and a robust but plain hardcover case. The build quality is also good, even though the ARIA ME does not look particularly sophisticated. In return, I find the complete operation via push-buttons more pleasant than via touch because I subjectively find the haptic feedback more reliable.

The isolation is quite good on the inside even without ANC, but some noise penetrates to the outside world (at high volumes).
The ANC does a good job on the ARIA ME. The low, monotonous frequencies are filtered well and the entire sound is dampened, although not completely eliminated. However, I don't know of any ANC headphones that can currently do that, even though the SONY WH-1000XM4 does an amazing job. However, the ARIA ME is always good for isolating oneself from the hustle and bustle in the office or on the road. Nevertheless, there is a slight background noise when ANC is turned on, but I personally do not find it particularly annoying.

The ARIA ME can be personalized via APP (AVANTREE AUDIO APP) and the created audio profile can be loaded onto the headphones. This is then permanently implemented and available on every device. However, you cannot change the profile without the APP. If you want to delete it completely from the headphones, you have to reset the ARIA ME to the factory settings (+ & - button pressed simultaneously). Test tones (125 Hz, 250 Hz, etc.) are used to check how well you can hear certain frequencies and you turn down the volume until the test tone is barely audible. This is tested for the left and right ear.

Sound
Since the sound is even more subjective due to the individual adjustment of the sound to the hearing than without this option, I will briefly say a few words about the factory settings here. However, the review is then based on the sound adjustment to my hearing, even though cheating is possible here, of course. As far as possible, I tried to set the volume of the test tones to an absolute minimum, meaning when I virtually only suspect the noise.

Without this setting, I have to say that the ARIA ME would not have achieved this score. Likewise, the ARIA ME is one of those candidates that I like better (because it's thinner) with ANC turned on. Without ANC, it is very bass-driven out-of-the-box, which has too much presence in the upper bass and therefore also seems quite boomy and overloaded. The mids can hardly assert themselves and seem quite muffled and veiled. The trebles lack transparency as well as energy and basically the ARIA ME is more of a bass slingshot without the need to create a differentiated sound image. The addition of ANC tames the bass a bit and the mids come through better. Thus, you can guess that there is more to the ARIA ME than expected, and so personal sound customization now comes into play.

Bass
I can turn 125 Hz as well as 250 Hz completely to 0, because even then I still perceive these frequencies without problems. This shows well how these frequencies are already boosted in the house signature. However, the bass now sounds much more balanced and tight than without the modification. Still, it is not the fastest and sometimes a bit uncontrolled. It does have a good punch and doesn't lose its fun character, but it no longer pushes the mids as hard and a few more details can be elicited from it. As it is, it does a solid job, even if it would like to be a bit tighter and bring more sub-bass extension.

Here perhaps my age-related loss of hearing abilities already comes into play, but it also shows me that out-of-the-box the ARIA ME (also due to the bass influence) has too little energy in the upper mids, which then makes them sound rather dull and lifeless. With the correction, they have much more playfulness and the sound clears up. I sometimes disagree when it comes to tonality, but basically they play rock solid now, even if they have slight deficits in separation. They are also still a bit too warm, but you quickly get used to that and the ANC mode (see below) can also help.
The ARIA ME is not a detail wonder, but enough information is provided for relaxed listening, movies, or audio books.

Trebles
This is where it really becomes clear what the ARIA ME lacked. Likewise, the weaknesses of my left ear are again demonstrated to me here, but I was already aware of them before. So 4 kHz get a boost of about 40%, 8 kHz and 12.5 kHz even about 60%. In contrast, on the right ear it is 30% at 4 kHz, 10% at 8 kHz and 40% at 12.5 kHz. To me, this shows that my right ear is much more sensitive around 8 kHz, but also that the ARIA ME generally needed a significant refresh in the high frequencies.

With the gained energy and transparency, the ARIA ME sounds much more lively, but remains relaxed. It's only very rarely unpleasant in the high frequencies and that must be strongly favored by the respective recording. Of course, this can be additionally influenced by the listening test, for example, by adding more level than necessary at 8 kHz, which can then affect sibilants, for example, but in my case I find the high frequency of the ARIA ME to be very pleasant and to stand out positively after the adjustment.

Stage
I find the stage of the ARIAME somewhat limited, despite the increase in treble. Little to nothing happens outside the head, and so the stage can be described as quite intimate without seeming cramped, however.

Imaging
The ARIA ME is able to produce a realistic 3D image in width and depth despite the rather small stage. However, the separation is not the best and I would like to see more airiness.
The ARIA ME seems a bit ponderous rather than light on its feet, but all within acceptable limits that don't limit the enjoyment of listening to music..

ANC
I actually like the ARIA ME best with ANC activated. I audibly lose volume in the sub-bass, but also (to a lesser extent) in the mid- and upper-bass. As a result, this now sounds a bit leaner and more balanced. The mids can assert themselves a bit better and the highs remain at the same good level. This means that the ARIA ME sounds most balanced with ANC and the sound adjustment, which is a clear difference to out-of-the-box and you like to listen a bit more carefully with the ARIA ME. If it should be a bit more bass for hip-hop or electro, I simply turn ANC off again. ANC only works when the headphones are also turned on (but there does not have to be a Bluetooth connection).

Cable
The sound in cable mode is basically the same as in Bluetooth mode, except that the personalized sound profile is not available, which again degrades the sound for my taste. For additional ANC, you need battery and headphones turned on. The cable mode has priority over Bluetooth.

Outro
At 149€, the ARIA ME is not a cheap BT headphone, but is at home in the mid-range. This price segment is just as strongly occupied by the usual suspects, such as SONY, TEUFEL, BOSE, SENNHEISER, etc., even if their top models are still significantly more expensive. But what distinguishes the ARIA ME now, or what makes it competitive here?

I think that the personal sound adjustment to the individual hearing performance is to be emphasized. Likewise, the conversion option to a full-fledged headset (but the integrated microphone can also be used for phone calls and the quality is satisfactory), as well as the headphone stand with integrated charging function. Sound-wise, it is only usable for me if you also use the sound adjustment feature. I would also have liked to see more customization options, as SONY impressively demonstrates with their Headphones app.

For the older generation, the ARIA ME could be a very interesting solution, since adjusting the sound to the hearing performance can perhaps bring to light new details that have been lost over the years. The bottom line is that the ARIA ME is a BT over-ear that performs on an average level in terms of sound without being able to stand out, but it has some nice features that can possibly justify the price to some extent.