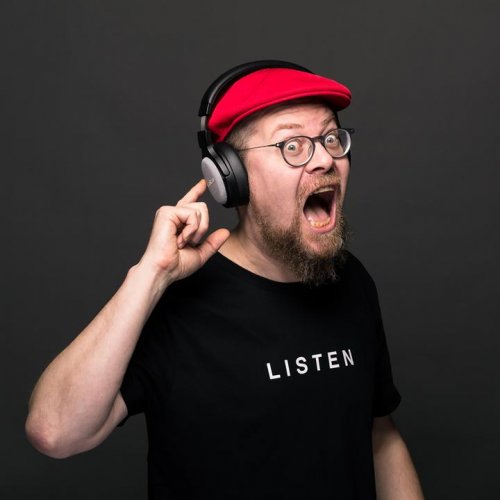 Intro
VALCO is a fairly unknown audio company from Finland that specializes in Bluetooth headphones and came out with their first model in November 2019. This review is about the successor model, which appeared in 2020.
Through the witty marketing as well as promotional posts on Facebook, you quickly realize that the company, especially Jasse Kesti (producer and sound engineer), doesn't take itself quite so first and thus earns sympathy points, because the VMK20, on the other hand, is not a joke, but a sophisticated Bluetooth headphone.
The sound of the VMK20 was tuned by Jasse Kesti, who also has a lot of experience from live mixing and is probably one of the best-known sound men for the studio and live events from Finland.

Handling
Design-wise, the VMK20 is a pretty average looking contemporary that focuses more on functionality. Keep it simple, I think is a good approach and so I have little to complain about here. However, the ear pads are a bit small, so that my ear touches the inside of the case. This creates a somewhat unpleasant pressure in the long run, but it is still tolerable. Otherwise, the padding of the pads and the headband is comfortable and the VMK20 makes a robust impression despite the almost exclusively used plastic.
You have enough play as far as adjusting (click mechanism) the headband to the individual user is concerned and the contact pressure is moderate, which provides more for a secure fit than headaches.

Passive isolation isn't bad even without ANC, but is optimized a good bit more when activated, as the lower monotone frequencies are then filtered out, whether on the bus, train or street, and the stressful background noise (conversations, wind, traffic, etc.) is also curbed. However, one should not expect absolute isolation, but I always find it a blessing to be able to actively isolate oneself from outside noise, even if it is only a reduction of it.

Sound
Bass
In contrast to many other Bluetooth models, the VMK20 has a fairly balanced signature and does without a classic bass boost. This does take away from its fun factor somewhat, but the headphones are indeed also aimed more at the discerning music consumer and dare to take on even higher and more professional tasks.
However, the bass is not the crispest and acts a bit slow for my taste. Nevertheless, it finds a good compromise between quantity and quality. It is not anemic, but can deliver enough impact to every genre, as long as you don't expect a bass cannon. It satisfies me with the rating of "good", even if I wouldn't emphasize it much, since it's not the most consistent.

Mids
It's a similar story with the sound of the mids. These sometimes get a bit of bass pushed on them and are quite flat and restrained, but accurate. Some might call this unagitated and relaxed playing style boring, while others might call it authentic and natural. Admittedly, they are also a bit too weak on the chest for me, or I would wish for an even more restrained bass in this case, in order to play out the full strength of the detailed and tonally correct mids. Thus, the VMK20 leaves a few grains behind here, but still plays quite above average, especially in the Bluetooth category. I would wish for a bit more energy and liveliness, but I appreciate the mids all the more in quieter passages, where they do not necessarily have to assert themselves.

Trebles
The treble is the area that stands out for me, even though the VMK20 doesn't allow itself to fluctuate too much downwards or upwards, but performs well throughout.
It does have a few deficits in extension, but it is very detailed and resolves finely. It doesn't shove the details in your face unasked, but it doesn't want to withhold anything from the interested listener either. I find it most coherent and would wish for the same clarity from the mids and bass. It does not become unpleasant, but it will not really enhance worse recordings, which I find positive due to the more professional claim of the VMK20.

Stage
The stage can be described as average. It lacks a bit in depth and most of it takes place in the panorama image.

Imaging
The VMK20 doesn't really create a 3D feeling, but the separation works quite well, even if the VMK20 sometimes loses track in hectic passages and doesn't separate as sharply. Here you notice again that the mids in the upper range could have benefited from a few dB. Nevertheless, the VMK20 delivers a credible sound image, which, however, cannot distinguish itself with absolute transparency and seems rather more intimate.

ANC
ANC is no longer a special feature in Bluetooth headphones, but there are still significant differences in quality, on the one hand in terms of "isolation", but also how much the sound changes with ANC turned on.
SONY is certainly worth mentioning when it comes to unadulterated sound with ANC turned on.
With the VMK20, on the other hand, quite a bit happens when the button is activated. The bass loses presence, especially in the lower range, the mids sound a bit more "telephonic" and voices come more to the fore. This is a bit irritating when switching, but you also get used to the "new" sound after a while, although it sounds more falsified in comparison and no longer seems as homogeneous.

Cable
The VMK20 can also be operated with a classic 3.5mm connection (cable included). However, the sound then meets my taste less, because the bass gets more volume and pushes back the mids even more. You lose some resolution here and you notice that the drivers were tuned for Bluetooth mode (which makes sense). Still, I would have liked to see less sound compromise in wired mode.
ANC can also be used in wired mode, with the aforementioned sound changes.

Outro
The VALCO VMK20 is a somewhat different Bluetooth headphone that doesn't go the conventional route, but has a bit more of the audiophile market in mind.
As a result, the VMK20 is certainly not a fun headphone that blasts driving bass into our ears while playing sports, but rather focuses on the quieter, more relaxed tones and strives for a balanced signature where no frequency range particularly stands out. That doesn't always sound compellingly inspiring, and a bit more dynamics and peakedness certainly wouldn't look bad for the VMK20, but in return you get a fairly natural-sounding headphone that also cuts quite a fine figure on the couch. However, I would not dissect music with the VMK20, but that should not be its claim.

Despite the detailed and "refreshing" sound signature due to the rather neutral tuning in the Bluetooth world, I still have the feeling that a bit more would have been possible here sonically. With aptX LL, AAC, SBC, BT 5.0 and a decidedly long battery life (a good 40 hours with ANC), it doesn't let its guard down, at least in terms of basic technical requirements.

If you are looking for a more balanced Bluetooth over-ear and want to turn your back on the well-known bass and treble boosts, you should give it a try, since the price-performance ratio is not bad either, although APPLE should not be a role model here.