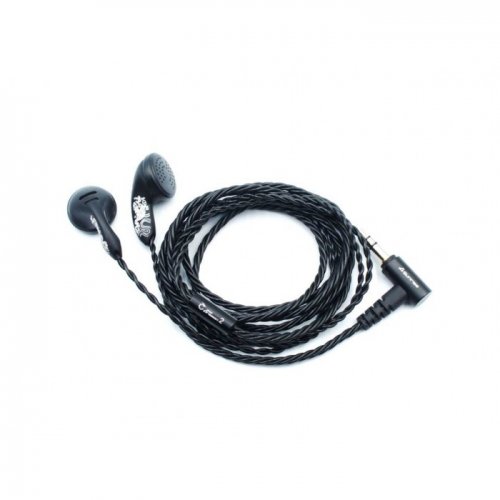 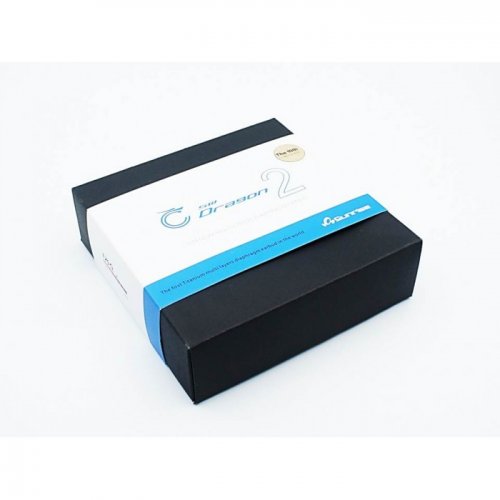 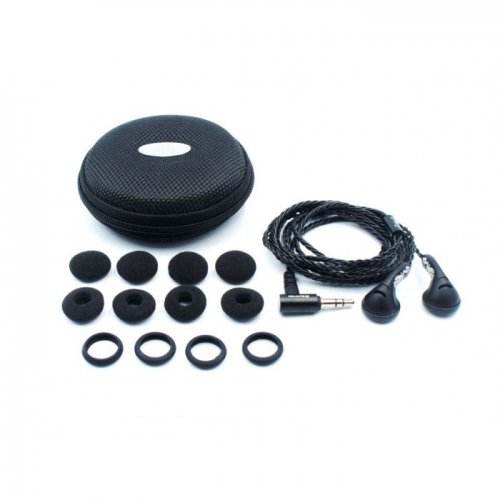 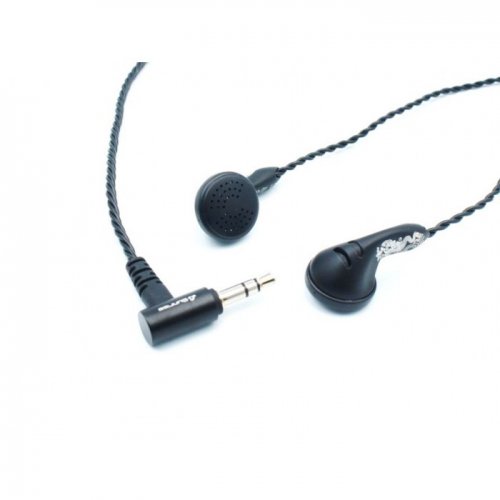 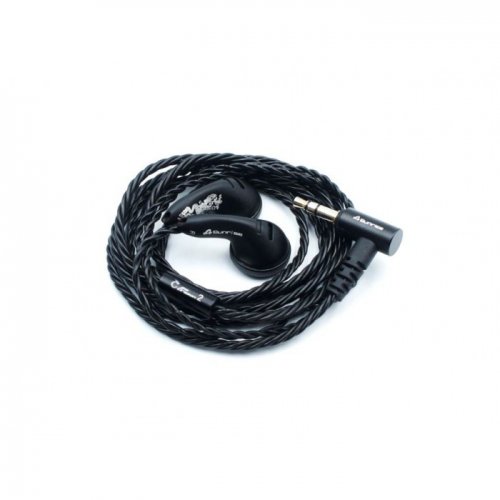 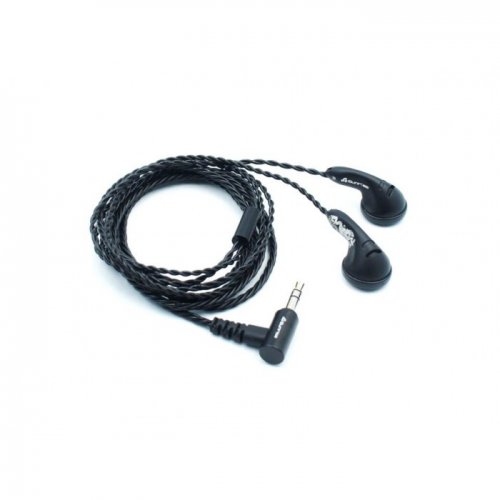 Around the Sunrise brand, there is an aura of mysticism, through its famous Dragon earbuds. Under Simphonio's umbrella, he is once again jumping into the spotlight, with the new Sunrise SW Dragon 2 Limited Edition 10th Anniversary model. The legendary earbuds, whose diaphragm is made of multilayer titanium, are the first in the world to be made of this material. This fact gives the brand a pioneering status. And something like this does not happen every day. That is why it is normal that this model deserves a limited edition, as a response to its tenth anniversary. And here they are, no more, no less, than the desired SWD2LE, earbuds built with the classic PK capsule, decorated with the classic patterns that make them so characteristic. Let's see what their great virtues are. 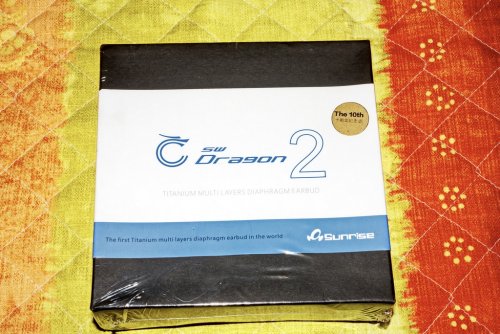 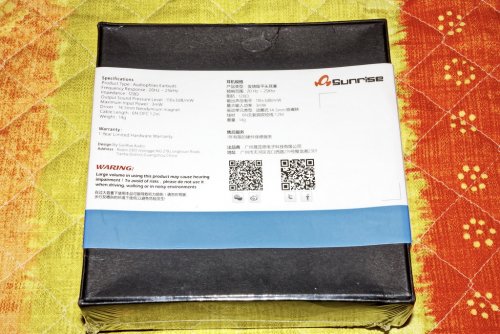 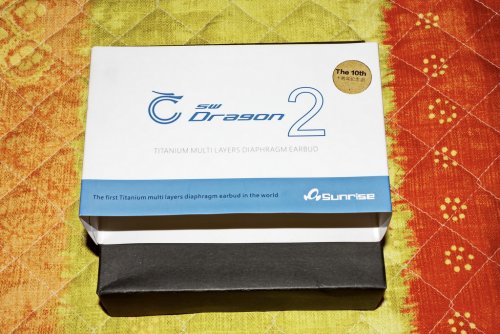 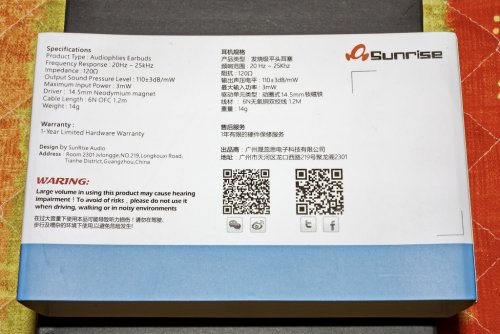 The SWD2LE comes in a square box, made of black cardboard. Its dimensions are 150x150x45mm. Around it, there is a wide ribbon, also made of cardboard, although quite thin. There is written all the information about the model. It is practically all white, except for the lower part, which is blue. On the main side there is the name of the model, as well as a label, round and gold, indicating that it is the tenth anniversary version. On the side face it is specified that it has 120Ω and a scale that goes from bass to treble, which consists of 8 boxes. Above the separation of the fifth and sixth squares, there is an inverted triangle. Perhaps this is an indication of the profile of the headphones... On the back face, there are the specifications, in English and Chinese. Warranty, brand and address are also indicated. There is a usage warning, two QR codes, which contain links to the various social networks (by the way, they point to Simphonio Audio) and the brand logo.
After opening the box you can see a grey foam block, which contains a zippered box, a warranty card and several bags with accessories. In short:


The case has a metal plate, with the logo of the brand. It is quite rigid and suitable.
As a negative point, there are few foams and the content is very sparse, for a limited edition tenth anniversary. The best thing is the transport case. 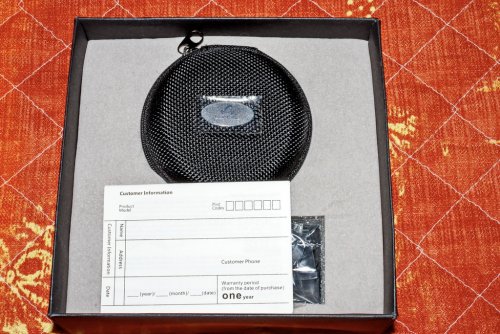 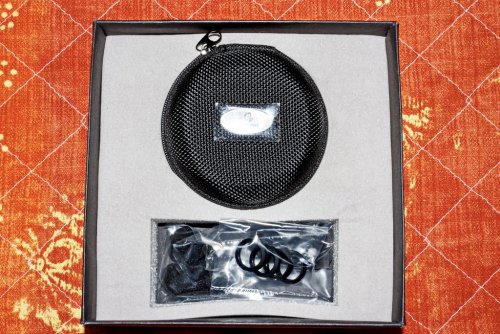 The SWD2LE is based on the small, slimline PK capsule. It is made of black rigid plastic. Its cable is fixed and consists of four 6N OFC strands, covered with black plastic. The cover that protects the driver is quite flat, it is also made of black plastic and has multiple holes, although not over its entire surface. On the back there are two slots, the upper one is open and the lower one is not. On the sleeve, on the inner side, there is the classic drawing of the Dragon. On the outside, there is the brand logo and the letter that indicates the channel. All in white ink.
The cable measures 1.2m, has an angled and cylindrical connector, with a 3.5m pin, gold-plated. The brand logo is printed on this cylinder. The dividing piece is another black cylinder, on which the model name and logo are inscribed. It does not have an adjustment pin. All parts and pieces are black and the inscriptions are white. The total weight of the set is 14g.
As you can see, except for the drawings and inscriptions, the construction or design does not seem to be very special. The wire could be of a larger section, deepening the exclusivity of the model, with a more exuberant pin... But this is not the case, remaining in something more basic and normal. 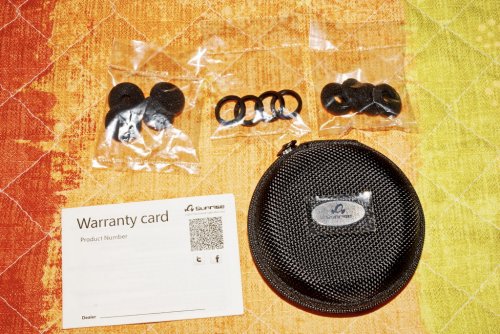 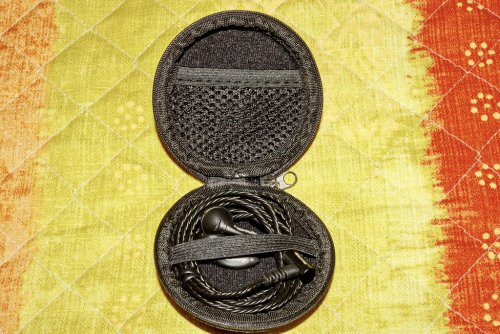 The SWD2LE are small and very light. As I have already said, they use the classic PK capsule, which is an advantage for many, because their ergonomics are completely proven. It is true that lately, new designs are coming to the market, which allow, besides a different adjustment, the possibility of using MMCX cables. In this case, Sunrise has continued to opt for the classic cable and the initial shape.
These capsules are still among the most comfortable on the market, despite the new models. The cable, which is thin and coiled, feels very flexible, pleasant and does not have much tendency to tangle.
Classic fit and ergonomics, for anniversary earbuds. 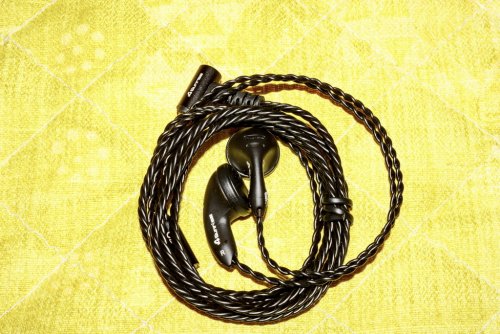 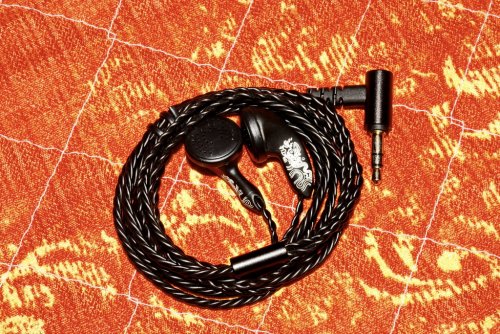 The profile of the SWD2LE is eminently warm, with a fairly complete low area, without being predominant, but with good depth. The mids are present, without ever being muddy, nor over-exposed, just warm and pleasant. The treble is fine, but soft, with good articulation and dynamics.
For maximum performance, I have connected the SWD2LE, to powerful sources or with the high gain mode activated.
For the description of the sound, I used donut type foams. 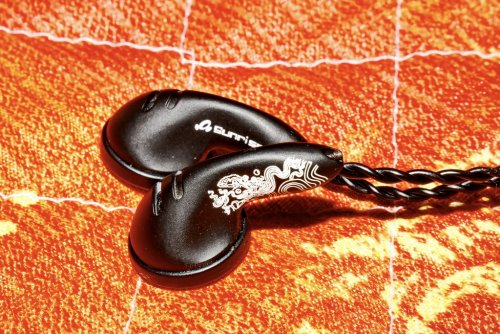 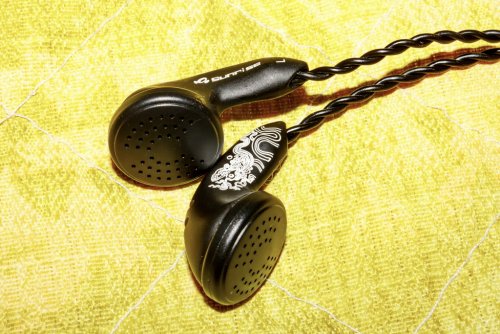 For earbuds, the lower zone is quite deep. It reaches 40Hz, offering a totally natural sound, nothing forced, without strange vibrations. As I say, the sub-bass performance, at that point, is totally clean and perceptible; moreover, it is not without power. Having said that, the goodness of the driver in this sense is clear, even inside a small capsule like the PK. It is also true that, below this figure, its intensity is lower, but its sonority remains natural, deep and uncoloured. However, nobody should think that they are bass IEMS, but in my opinion, their low zone goes beyond neutrality and adds a lot of colour to the overall sound.

The execution of the bass is very agile, with great speed and restraint. The decay is fast and doesn't have a lot of sediment, disappearing quite quickly. It feels quite dry, but its texture is not poor, as roughness is perceived quite easily, but reproduced with precision. Technically, the low area is more than noticeable, with good timbre, realism, depth and speed, with good capacity to recreate planes and resolution to shell multiple bass lines with extreme ease, space and definition. But, make no mistake, the power and hitting is contained, slightly above balance.

Finally, as is normal in a warm headphone, there is a certain darkness in its profile, something that starts from this lower area. 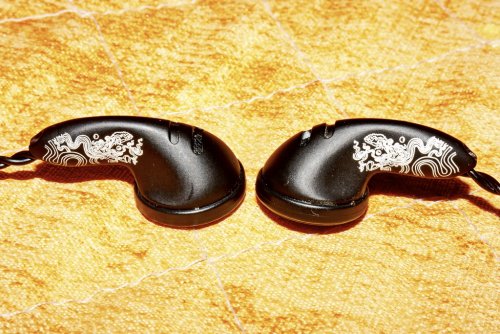 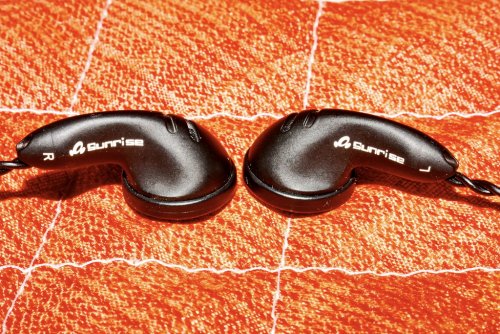 The midrange are eminently warm, with no trace of mud, but somewhat weighted down by the slight darkness in their presentation. Thus, the voices are perceived as quite velvety, being executed by the soft and sweet side, especially when they are isolated. In faster and denser genres (rock, metal), the darkness decreases, and the good dynamics in the mids can be appreciated, as well as the precise cohesion between voices and instruments. The overexposure of the vocal notes is quite light, for a PK capsule, sharing a lot of prominence with the rest of the mids. It is true that a greater presence is perceived in the first half of the range, something that polarises the profile, towards that characteristic warm atmosphere. Nevertheless, the resolution is quite good, thanks to the great agility of the driver, which executes the notes quite quickly. In this way, a pleasant definition is obtained, but without the sounds being too polished, maintaining that satin mantle over them and which, especially, wraps up the voices, preventing them from feeling completely free, although not exempt from air and separation. 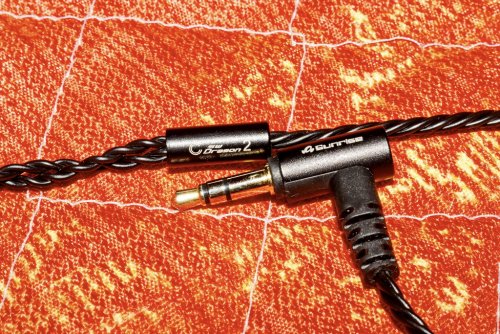 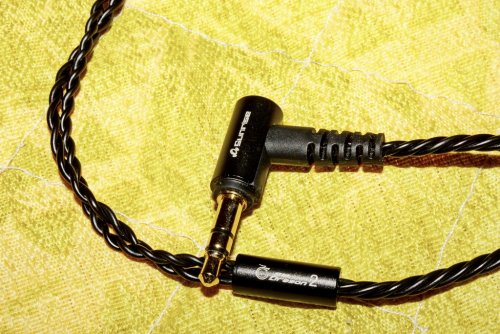 Treble has the virtue of separating itself from both darkness and warmth. They possess immediacy and sparkle, retaining the speed and agility of the other ranges. This gives the sound a necessary freshness, which does not manage to provide all the light that some might claim. The SWD2LE are still warm earbuds, but that does not mean that they are free of treble. The notes feel fine, with a tendency to be smooth, without over presence, but very well integrated into the whole, achieving a remarkable homogeneity and notable extension. The brightness is not very pronounced and the presentation is quite neutral, but there is liveliness in its execution, without escaping from the general warmth. The amount of air is evened out with the overall presentation of the sound, keeping it in the right measure, but without standing out especially. 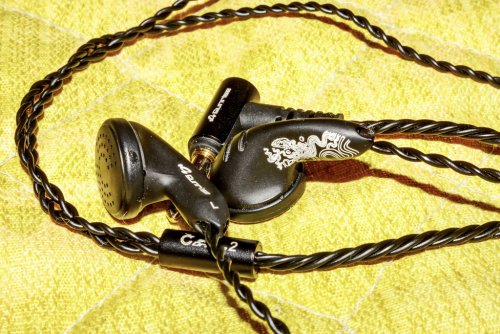 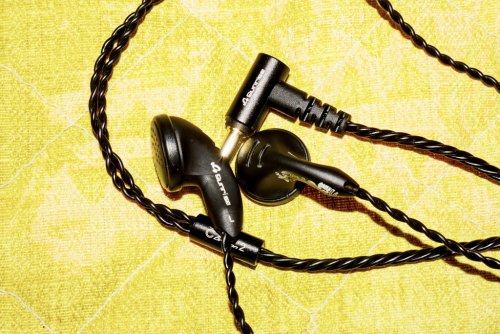 The scene is moderately wide, with good depth, but the three-dimensionality is somewhat weighted down by the warmth of the sound. Thus, the height and the separation are slightly affected. The background, due to the aforementioned darkness, cannot be discerned with total precision, which softens the musical projection, losing in cleanliness and clarity. The extraction of details is smooth, quite good, but without going into the micro detail. The nuances have a very perceptible projection, when they are close. If they are located in deeper or more distant planes, their development is not so explicit. Although, technically, these earbuds are quite good, their profile tends towards an analogical musicality, rather than an analytical and highly precise one. 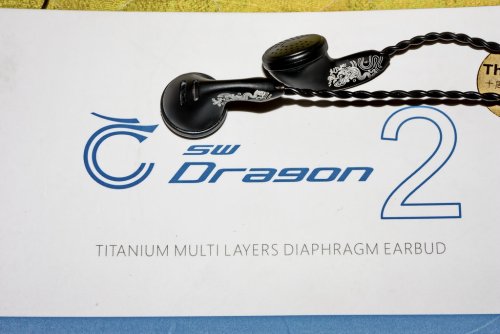 Ever since I started to worry about the history of the earbuds, I always read about the legendary Sunrise Dragon and its virtues. Now, I' m proud to own such a special product. Especially when it is a limited edition, taken out to commemorate its tenth anniversary. Its drawings and sound are still capable of arousing passions, among those audiophiles who like warm and analogical profiles (in which I include myself), but without giving up a good dose of technique, spark and dynamics. The SWD2LE has a fairly complete sound, from the low end to the mids, rounded off by some trebles, which are the icing on the cake, of such a characteristic and exemplary profile. The rest of the criticism can be considered pure envy... Not all earbuds can be SWD2LE. 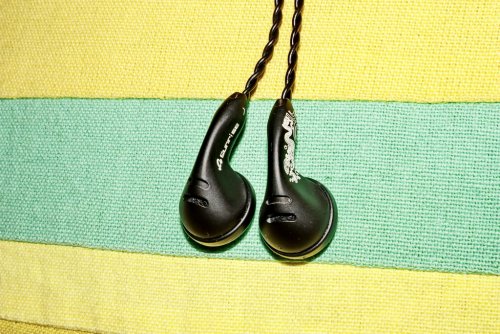 Sources Used During the Analysis 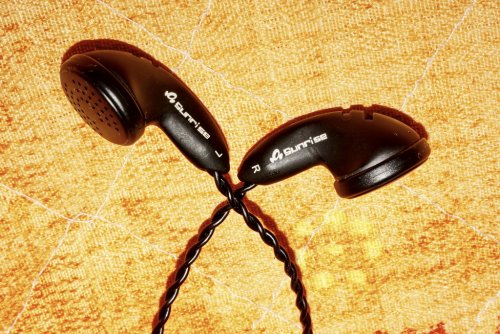 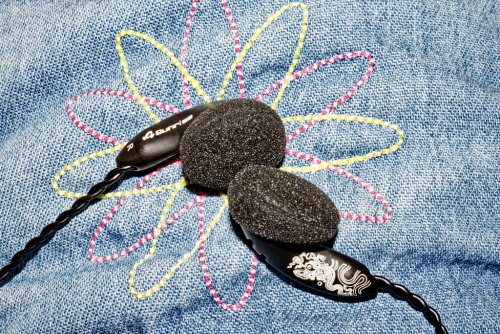 You can read the full review in Spanish here
Reactions: sanjaycr and Dsnuts
Read more…