The true dimensions of the Sennheiser MOMENTUM In-Ear headphones can be measured not only by their uncompromising sound, but also in a wealth of little details – from the nano-precise, stainless-steel sound tunnel to the three-button multifunction remote with integrated microphone.

The design of the MOMENTUM In-Ear speaks a clear, consistent language. Over 200 contrasting red stitches grace the black-lacquered zipper on the soft-covered case that safely protects your earbuds. The black-and-red cable leads to a red, high-gloss housing. And the outstanding design also extends to their fit, with comfortable tips that sit just right.

There’s only one way to deliver uncompromising sound in a small package: by combining top-quality materials with superior craftsmanship. That’s why the acoustic components contain no plastic. They are made of high-quality stainless steel, manufactured using precision milling technology. It’s not a difference you can see – but one you’ll hear in the powerful yet nuanced sound signature. 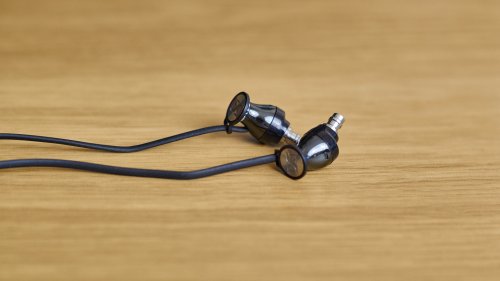 It's been a long time since I tried any Sennheiser in-ear so I was curious about these.

The first thing I’ve noticed when picked them up is how light these buds actually are. Unlike so many earphones nowadays, these are almost entirely made out of plastic. The cable is quite thin and lightweight too, and not removable. It has a rubbery feel to it and I’m happy to report it doesn’t tangle at all. The downside of this lightweight build is that cable is quite microphonic. It is prone to picking up your movements as it rubs off your clothes.

I’m happy to say that Momentum in-ears are not picky about the source. They’ll happily cooperate with a good phone output, but give their best with a reasonably priced DAC dongle like Sonata HD. Moving to Dragonfly Black didn’t yield much improvement. 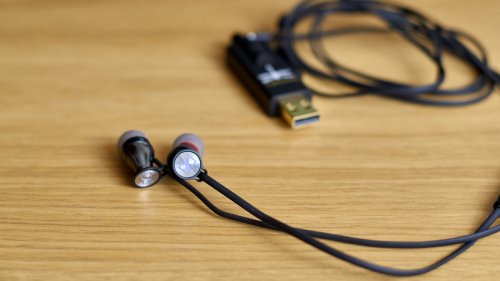 The sound signature was a surprise for me. I expected warm, to die for, midrange and softened highs, but no sir. Bass was prominent, weighty and disciplined – in one word great. The lower midrange has a noticeable dip, while the higher midrange is pronounced. What this means is that vocals are not particularly weighty nor full sounding. That high midrange peak is giving them an edge too. This edge increases the sense of resolution but makes vocals sound more aggressive too. Occasionally harsh sss, hhh, etc. can be heard. Going higher into the frequency response everything sounds fine. Momentum can reveal plenty of atmospheric details on your recordings.

This U shaped signature really took me off guard, because I just wasn’t expecting it from Sennheiser. But moving on there are other qualities here. As I mentioned, bass notes are weighty but well-controlled, never rumbling without a purpose. Overall clarity and instrument separation are great too. Browsing through my Pop and Rock music I had a lot of fun. Due to its sound signature, my favorite Jazz singers didn’t sound as present and rich as I wanted them to.

Tin Audio T2 – has a more balanced approach with less weighty bass but fuller midrange. Some consider them to sound a bit thin due to bass restraint, but I believe T2 offers higher fidelity sound then Momentum. Detail retrieval and instrument separation are neck on neck.

BLON BL-03 – Even heavier and punchier bass than we have with Momentum. Similar slight lower midrange dip, but not as pronounced higher midrange. Thanks to that BL-03 sound tamer and never harsh. Basshead haven. Detail retrieval and instrument separation are comparable.

**** **** – Warmer sound with the fuller but also slightly muddier midbass and midrange. Great with vocals. No harshness and roughness in the upper midrange whatsoever. The highest frequencies are clean but not as pronounced. Compared to Momentums they do sacrifice that last bit of clarity for warmth and fluid-like sound.

As you can see, I believe that all of these are very comparable no matter their wildly different pricing. While **** sacrifice some insight for warmth, with T2 and BL-03 you get as incisive sound as with Momentum. Their build is top-notch too.

Depending on your preferences you may welcome or dislike this detour in Sennheiser's sound signature. Other than that these are quite good. As far as established western brands go, this is as good sound as you get at this price I suppose. But if we're talking about models coming from the east, you’d be able to spend less yet acquire the same sound quality with even more premium build. To quote Bob Dylan – The times they are a-changin‘.

You can read this and many other reviews at iiwireviews or watcha video review:

Reactions: volly
Pros: Satisfyingly powerful sound, good comfortable fit, full function ios remote with volume control, tangle free cable
Cons: While an attractive design...perceived build quality lacks the "all metal eye candy" of many of the very affordable Asian offerings.
The Sennheiser Momentum in ears have been out already for quite a few years now and this is my second time revisiting these in ear monitors....first was just after their initial release and while I thought they were ok I had also picked up the 10x pricier ie800s so never spent much time with them and passed them on.

Well over a year ago I sold off the ie800s thinking the lower priced Asian alternatives would suffice but a year later I sadly missed the sound from those little Sennheiser gems. Not having the heart to spend another 1k and seeing the used and new markets is fraught with counterfeits thought I’d try a more affordable alternative...which led me back to the Momentum in-ear.
These are now the current Rev 3 (see designation under the bar code)..... 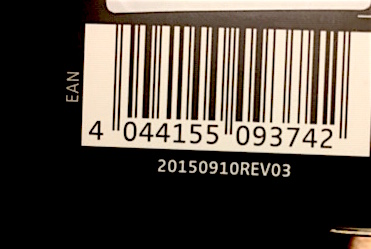 ...not that anything has changed AFAIK....Rev 1 Momentum in ear, Rev 2 "HD-1 in ear" and now back to “Momentum” in ear
https://en-ca.sennheiser.com/momentum-headphones-in-ear
“Due to market requests, we are bringing the Momentum name back home. The HD1 In-Ear has now been replaced by the MOMENTUM In-Ear.”
....accessories remain the same although the inside bedding has been replaced by a felt like covering as opposed to the shiny upholstery of the rev 1 & 2s, see photos
Rev 1 & 2 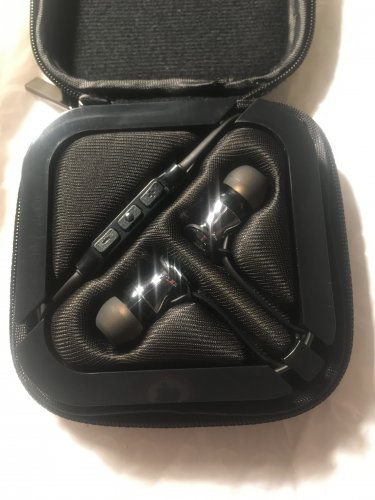 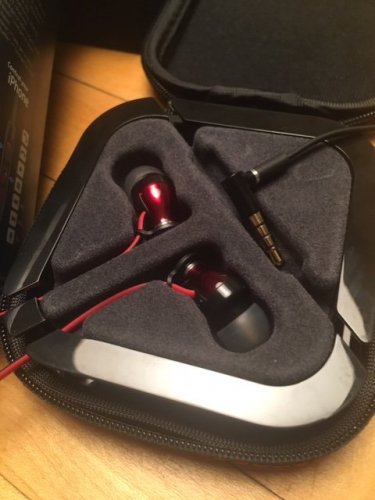 ......sound wise....once I decided on the proper sized ear tips for the best base performance and sound I really liked the presentation and while not as open as the open back full-sized HD650/660S there is a family resemblance, smooth and easy listening and like the more pricier ie800s the base is more present/powerful but balanced which adds body and weight without interfering with the mid-range and treble...the sound-stage is satisfyingly wide when called upon, overall IMHO a big improvement overall to the much more affordable Asian brands.

Build quality is sufficient with its plastic body and aluminum nozzle they are relatively light weight...
Fit really really comes down to the individual, the housing and cable are designed to be worn down and not for over the ear....the shell may also extend too far out for some users, my ears are big enough to where they almost sit flush. See photos 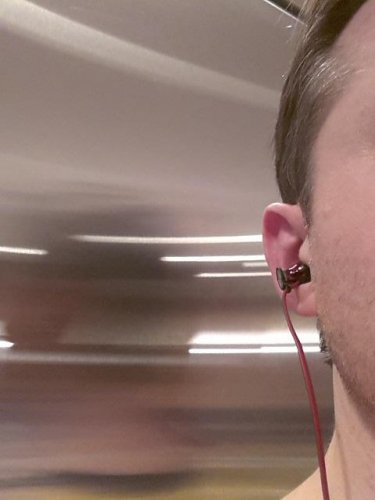 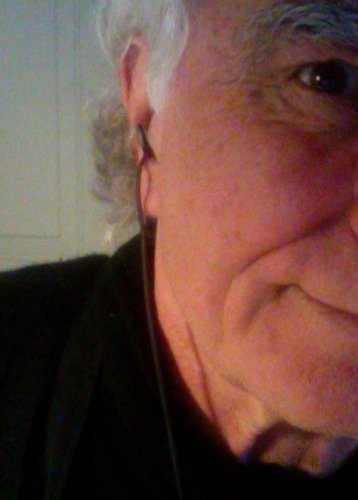 The IOS compatible remote is great for cold weather use so that one is not searching for inside coat pockets to pause and most importantly to adjust the volume levels and the tangle free flat cable is a god send.

Overall though I’m quite satisfied by the sound quality, maybe not in the league of higher priced or tonally correct offerings, but when out and about they keep me entertained and add an extra stride in my steps, micro-phonics is good and as a portable it crosses all my "tees".........Sennheiser 2 year replacement warranty. (when purchased from an Authorized dealer)
Pros: Wonderful bass, recessed but smooth sounding midrange, pretty good soundstage
Cons: "Splashy" treble, wire not the greatest
Not an audiophile, but here are my most notable impressions of these in ears:

They're V-Shaped
Natural, warm, accurate, true to life are not the words I'd use to describe these headphones. They're fun though, and for on-the-go listening, I think these are great, since you won't be looking for detail of the n-th level while walking down the street, or standing in a bus.

They have bass
Quite a lot of it. I'm no expert on bass bleeding in the mids, but I suspect there might be some splash into the midrange. Most of the bass is in the mid to sub bass region, which is good, and the bass doesn't sound boomy. It has a lot of impact and get's pretty deep.

They have forward and "splashy" treble
There's some emphasis on the high-mid to low treble frequencies, but not as much as I would have expected. It does have a lot of extension though. It sometimes makes some instruments and sounds, like cymbals, sound overly emphasized and in your face. Also, while this is going to depend, I find these earphones sometimes get a little sibilant on certain tracks. Not to the point where I can't listen to them anymore, but enough to make me think of lowering the volume ever so slightly.

Midrange is recessed
It's not a bad midrange though. It sounds smooth and natural. Most of the time, vocals don't seem to be buried under the treble and bass, however it can happen on certain tracks. Most notably those, that I know have backing vocals, and I have to kinda search for them in the mix, whereas on other headphones they're just there.

Soundstage is good
Not something I would write home about, but enough to keep my interest. Imaging though, IMHO is not the best. Everything sounds slightly outside of my head, but I wouldn't be able to tell exactly where from. Just the general direction that the sounds are coming from.

Wire is sh**
It's thin, quite long and it remembers that last time you put them carelessly into your pocket and they got tangled.

They're quite big
You're not going to wear these under your hat - you can forget about that.

Isolation is... meh
They're shallow fit, so..

Foam does wonders with these
It takes away a little bass and some of that overly splashy treble and converts it into a bit more midrange and soundstage. It doesn't really change the overall signature of them, but those slight I'm all for those slight changes in these earphones.

Would I buy them again for 80$?
Yeahp. They're fun, they're good looking, have a 3 button remote for both android and iOS (separate models) and they sound a helluva lot of cleaner than my previous IEM's - AKG K323. Oh, and they sound fun.
Compared to AKG K323: AKG's have the same amount of soundstage I feel, but the imaging is very accurate. And because they sit so deep into your ear canal, it sounds slightly freaky when a violin is making sounds right outside of your right ear. Also, because they go so deep into the ear canal, they're more comfortable and way less conspicuous. As for sound, the AKG's have less bass, that gets just as deep, they have less treble splash, but more emphasis on mid and low treble, and they sound dark AF. Something about those mid's I just can't accept. Also, the wire's ****, and is shorter, so it's even worse.

I prefer Momentum In Ears, over AKG K323 - they sound better and cleaner. AKG's have their moments, but most of the time, I don't regret spending nearly 2x on the Senns' as my replacements.
Read more…