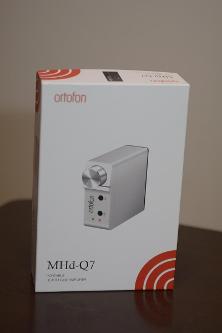 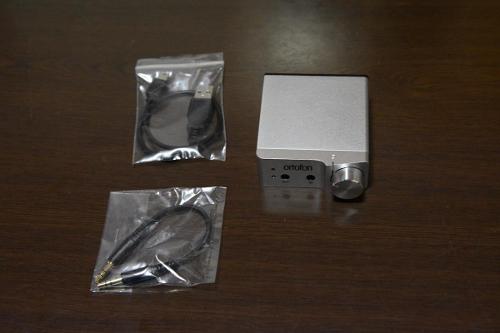 The MHd-Q7 comes in a plain cardboard box with closed-cell foam packing. Contents are minimal: you get the amp itself and nondescript 3.5mm interconnect and USB charging cables. Fair enough. 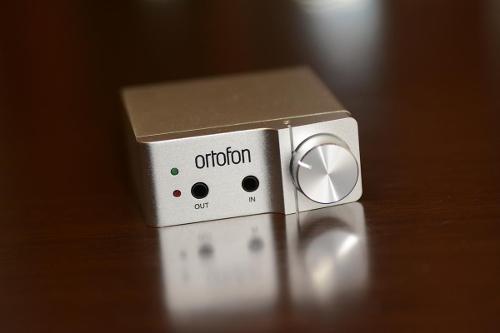 Ortofon really knows how to make a good looking product. The MHd-Q7 really feels high quality with its clean and stylish aluminium construction that has a smooth, pleasant-to-touch finish with absolutely no rough or jagged edges whatsoever. It weighs in at about 150g, which is enough to make it feel solid but not unnecessarily heavy.  I wish more amps looked and felt this nice. 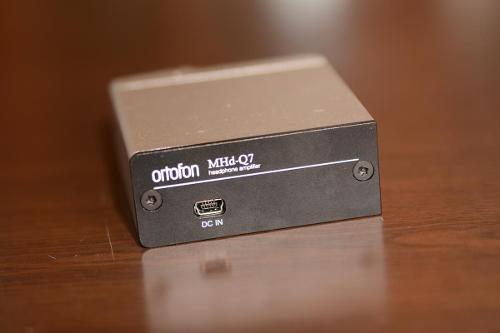 The wonderfully minimalistic design extends to its functionality as well – no unnecessary switches or knobs here. All you get is the 3.5mm input and output jacks, volume knob, power and recharging indicator LEDs on the front and USB charging port on the back. I was quite impressed at the quality of the volume knob which also doubles as the power switch – it feels solid, giving very granular volume control and has a satisfying click when turning on or off.  Unlike my daily driver, the Tralucent Audio T1, I did not notice any channel imbalance whatsoever, nor any noise while adjusting the volume – absolutely brilliant!

Although it calls itself a ‘headphone amplifier’, you can tell that it was designed mainly for driving IEMs, which it can do to volumes that would be more than satisfactory (or safe) for most listeners. It, however, struggled to drive my K701s, which are 60 Ohm headphones (albeit quite inefficient)  – maxing out the volume achieved barely adequate volume levels for me. I don’t like the prospects of this amp driving your 300 Ohm Beyers or other high impedance phones. 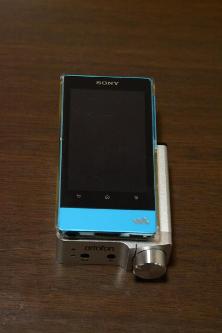 The MHd-Q7  measures 67mm wide by 84mm deep (including volume knob)  and  27mm high (as per the manual). This makes it unusually short, wide and deep compared to many other amps out there. This means that it will be quite difficult to stack it with some players such as my F-series Walkman as the widths do not line up  and the difference in length introduces problems with shorter     interconnects. This may make it an awkward choice for people looking for an amp to use on the go.

Battery life is decent, with a single full charge lasting about 20 hours (the manual quotes 18). You can also use the device while charging it – not being able to do this was a minor annoyance with the T1.

The MHd-Q7 produces a very smooth, analogue sound overall. I would not call it muddy, however, as it retains a high degree of clarity with a spacious presentation and excellent instrument separation. I would say that it wins out against the T1 in this respect.

Bass is more pronounced, yet with a soft and rounded quality to it. The T1 produces a tighter and more controlled lower end, however I did find that the MHd-Q7 had a more natural sounding timbre, especially for instruments like bass guitars and brass instruments.
Mids retain that signature Ortofon warmth and close presentation – vocals especially sound very intimate and smooth.The high end is less pronounced than that of the T1, so it does lack a little bit of sparkle. Instruments like high hats and cymbals also sound somewhat diminished in comparison.
All in all, I would say that the overall sound characteristics of this amp are close to that of the Ortofon e-Q8, and tend to emphasise them when the two are used in combination.

The Ortofon MHd-Q7 is a strange beast. Very handsome looks and solid feeling construction pair awkwardly with odd dimensions that hinder portable use, which it was supposedly designed for. I also take issue with it terming itself a ‘headphone amplifier’ when it struggles to drive much more than IEMs. Its sound is sweet and smooth and spacious: while not particularly my cup of tea, I can certainly appreciate the finesse with which it renders the music – there is not a hint of sluggishness to be found here.

If you’re a fan of vinyl-like sound and can make its peculiar form factor work for you, I think the MHd-Q7 is certainly worth your consideration.


Aside from importing and distributing Ortofon's global products such as turntable needles, their Japan office also makes some local Japan-only products such as earphones and amplifiers. Ortofon Japan produced their Hd-Q7 a few years ago and was already reviewed here.

Around early 2012, I was privy to the development of a portable amp Ortofon Japan. But for about 6 months I hadn't heard of any further progress form it until the e-earphone event in mid October where I met my Ortofon contact who then told me that he will ship me the MHd-Q7 for a review.

Physical Design and Signature the MHd-Q7


In a current portable amp market these days, there seems to be a trend to make more powerful amps that can drive high impedance headphones. Raw power seems to be requirement to get some attention and to "fit into the club".

Although Ortofon is a new participant to the portable audio bandwagon with this new portable amp, they have opted to stick to their philosophy of an analogue sounding signature that focuses on subtleties rather than just raw grunt power. As such this amp has a somewhat hint of a tube-ish taste.

As with it's older bigger desktop amp brother, the Hd-Q7, this small portable amp was designed with very stylish and clean-cut lines. It's very simple yet very classy. Although not a very practical shape, it's definitely attractive.


This amp weighs at 150g, measuring 82mm (from the knob to the back), 67mm wide, & 27mm thick. It charges via a miniUSB at the back and a full charge leaves the MHd-Q7 running for approx 22 hours. The input and output 3.5mm jacks are in the front next to two leds (green for power on/off, and red for battery level low). The volume knob acts as a power on/off too.

There was a little weirdness to the circuitry of the amp that when it charges, it will automatically stop charging when it's fully charged. It doesn't trickle charge. So during simultaneous charging and operation, you may find that even though the miniUSB is plugged in, the amp may run out of charge after 22 hrs. You'll need to swtich off/on disconnect/reconnect the miniUSB to charge it again. I've mentioned this to the maker and although they can't make anymore circuitry changes, they've updated their manual to reflect this.

As with the Hd-Q7, the volume knob is firm yet smooth. No channel imbalance was noticed at -any- setting. There's no sense of scratchiness nor static or noise during the volume knob operation. I wonder why other makers can't do this.

Update [30th April 2013]: The output impedance of this headphone amp is 0.38ohm. This further makes it suitable for the low impedance ear/headphones.

How Does It Sound?


If Ortofon Japan has aimed for a really clean sound that suited for classical and jazz, I'd say that they've done it and very well at it if I may add. The MHd-Q7 maintains very analogue almost tube-ish sound. It's extremely transparent, clear, and has a very airy presentation. It's bass has a nice warm touch to it. The midrange and vocals are also extremely warm and intimate.

Most of all it does a brilliant job of creating a deep 3D imaging and wide soundstage presentation. I must say that in single ended mode, for most of the genre I listen to, I actually lean more towards the MHd-Q7 over the ALO Rx Mk3.


Listening to the Chan Chan track the MHd-Q7 sounds richer than the ALO Rx Mk3. It edges out in clarity, transparency and staging. The Rx Mk3 actually sounds flat-ish and un-engaging by comparison. Meanwhile the RSA SR-71b has never really been my favourite amp and remains the same in single ended mode. The SR-71b sounds murky by comparison.

The MHd-Q7 has a nice warm midbass and highly involving vocals whilst the Rx Mk3 has a deeper sub bass but sounds thin in the midbass and mids by comparison. The highs on the MHd-Q7 also sound more airy with clarity and detail by comparison. But probably the combination of the 3D imaging depth, and wide soundstage that grabs my attention. It has a more immersive impression than the Rx Mk3.

Similarly with the El Cuarto de Tula track, the MHd-Q7 sounds more immersive and engaging. Due to the wide soundstage, the instrument separation sounds more distintive yet coherent.


On listening to strong vocals like Lana Del Rey's Video Games, the 3D depth difference is somewhat less but still edges out to the MHd-Q7 than the Rx Mk3. Again, Lana Del Rey's voice is filled with bloom and extremely immersive.


For a change, I tried something modern like Cher Lloyd's Want U Back. For fast songs such as this (and the rest of Cher Lloyd's album), the MHd-Q7's tube-ish signature starts to show its weaknesses. The Rx Mk3 responds faster whilst the MHd-Q7 seems to feel laggy.


As such the MHd-Q7, as the makers intended, is not a general purpose amp but catered really for those who like classical, jazz, and slow deep vocals. I do enjoy my Vivaldi collection, 50's/60's West Coast Jazz, Bossnova, and some country vocals such as Anne Murray with this amp.

On the other hand, as previously mentioned, more modern genre like hip hop, electronic, and dance the MHd-Q7 isn't suitable for such genre.

Although the MHd-Q7 has a rather awkward shape for most of the DAC/Amps out, it does work out with some combinations. The JDS Lab's ODAC was already shown above to work quite well and even the new iRiver AK100 seems to match pretty well with the MHd-Q7; resulting in a more cube stack.

Alternatively just using it with an iDevice has also been quite rewarding :-

This amp is quickly becoming my default amp to throw into my satchel. It works well with most of my DACs and earphones I have and most importantly for the easy going genre that I listen to most of the time.

audionewbi
Thanks, a great review. Would you recommend this for Acoustic guitars?

terirapt
Bought one based on your excellent review, and it is like what you mentioned. However, my set lasts only about 6 hours on full charge (at maximum volume though). Any idea what could be the issue?
Problem is that I bought it while I was in Japan last week, and now I am back home, and thus, kind of difficult to send it back to the retailer for exchange.

AnakChan
I've not tried full volume but 6 hours is really short! Mine lasted something like 20 hrs. The charging mechanism does have some peculiarities. When it's fully charged, the mechanism actually stops charging (even though the USB is still plugged in). And if you're using the amp at the same time, you start draining the battery (even though the USB cable is plugged in). So when you disconnect thinking you have a full charge, you may not necessarily do.
I'd say test it properly first - charge it fully and when it's fully charged, disconnect and use it.
Who did you buy it from? If you have the receipt, etc. feel free to PM me. I can't guarantee I can solve your problem but with my contacts in Ortofon, I can at least try.