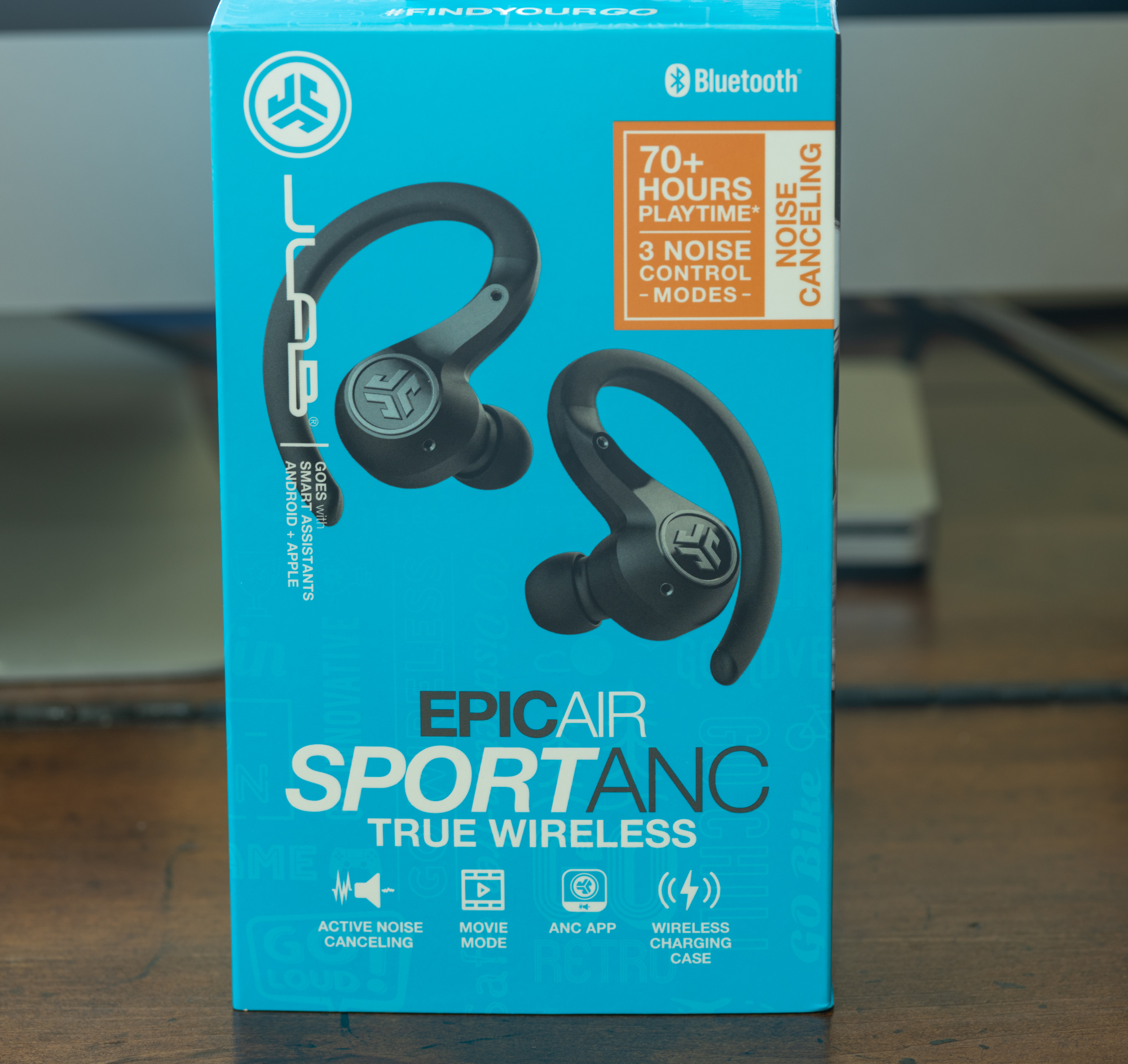 I recently received the Jlab Epic Air Sport ANC true wireless headphones. I had followed the press releases by JLab and was l looking forward to seeing how these were compared to their prior models. Most importantly, I wanted to see how much of a difference the ANC makes when I use them at the gym and other loud places. 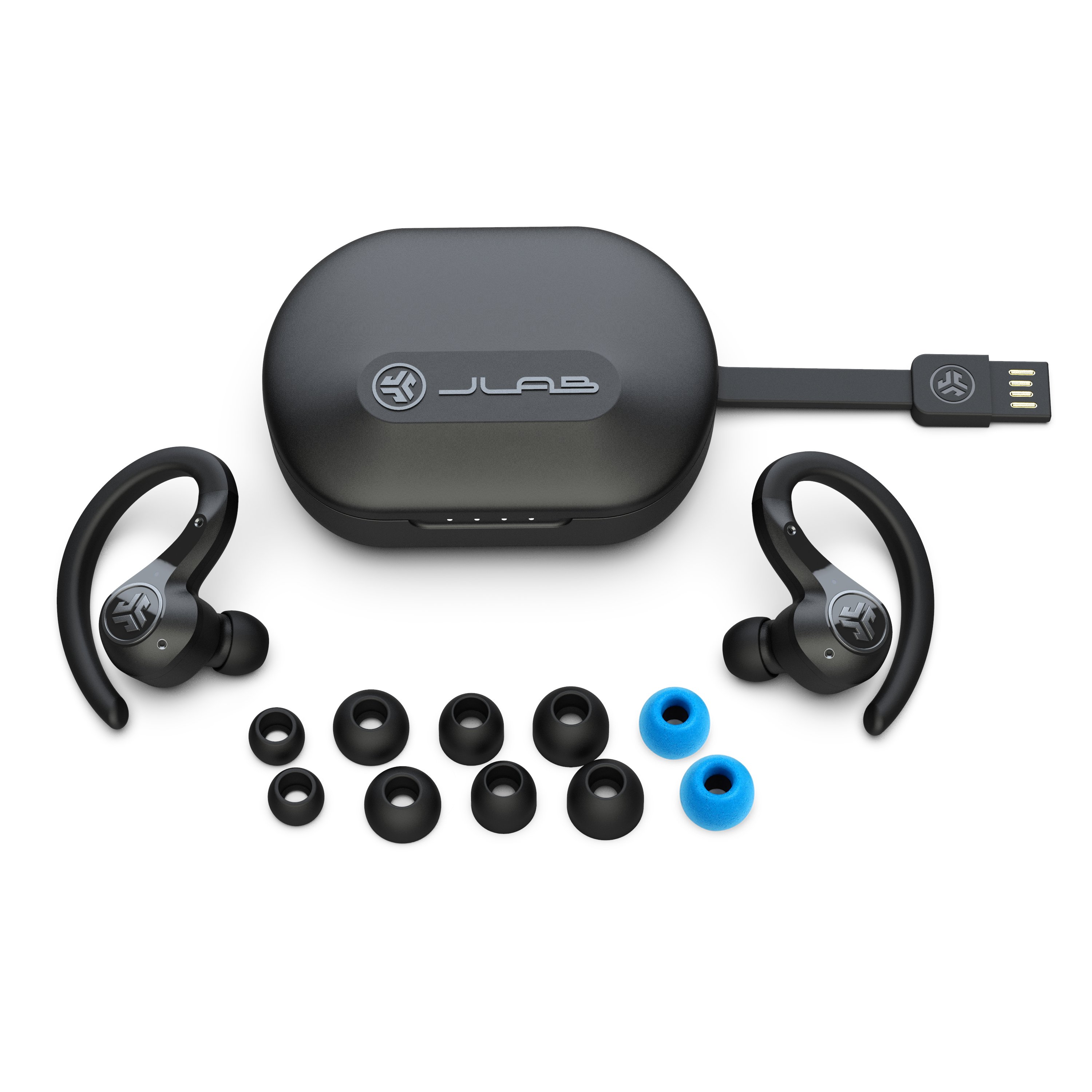 In the box the Epic Air Sports come with 3 gel tips with the corresponding sizes of small, medium, and large. Two extra long tips with the medium and large sizes are also included as well 1 set of medium size cloud foam tips. The charging case again has the built in usb charging cable and now can also charge wirelessly. 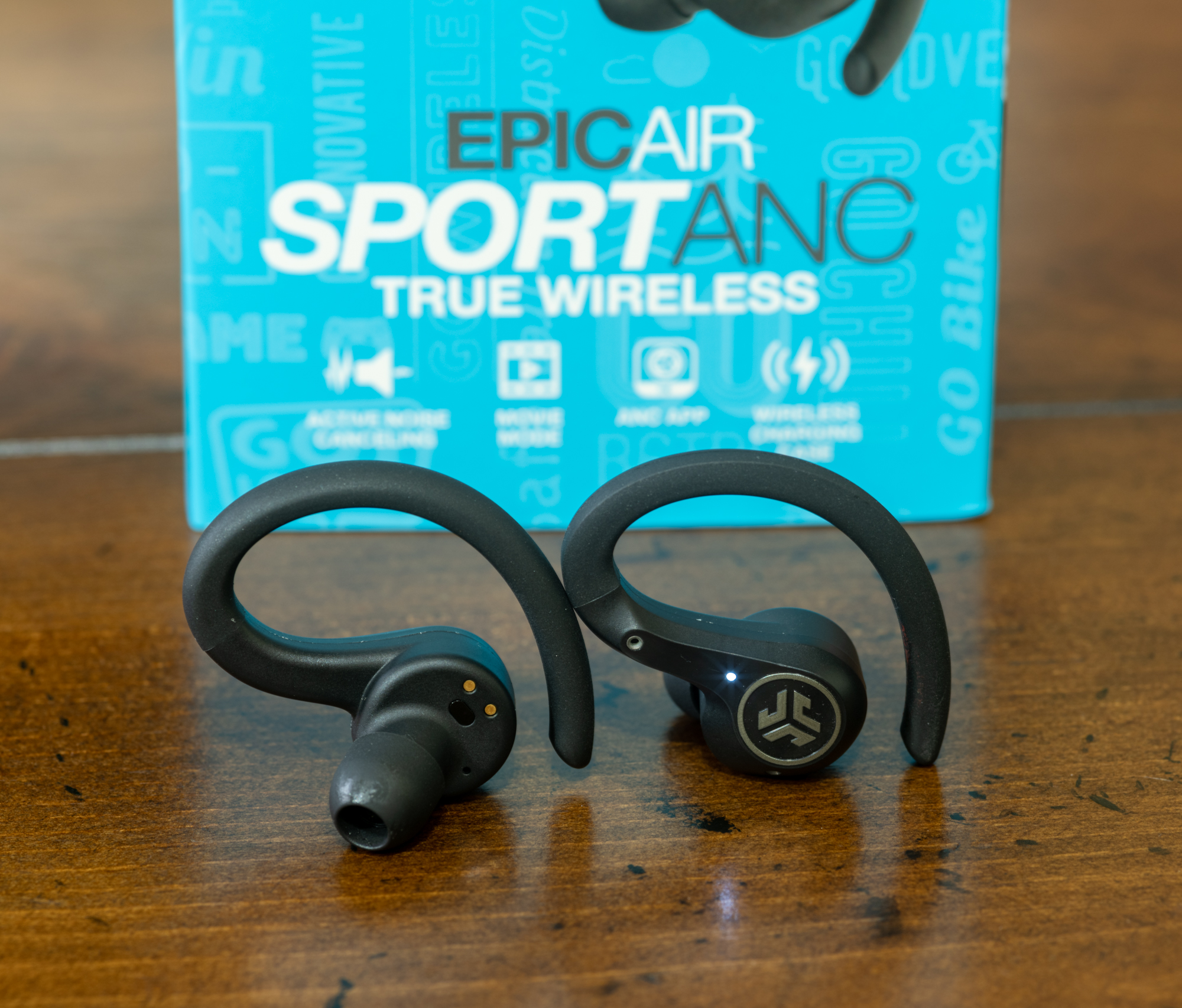 The Epic Air Sport ANC have a run time of 15 hours with ANC off, 11 hours with ANC on. The earbuds when coupled with the charging case, get an extra 55 hours of charge, which is equal to a total 70 hours of play time! The Epic Air Sport ANC utilize 6 built in microphones to cancel out outside noise and aid in active noise cancellation and is part of their smart hybrid anc. They also incorporate JLab’s Be Aware Audio which allows the wearer to hear their surroundings while still enjoy their music. This feature allows the person to hear traffic or other dangers. These features can be controlled on the earbuds themselves, but you can also control the level and whether to turn them off using JLab’s new JLab Air ANC app that is out for both Android and Apple. This latest iteration of the Epic Sport series now has wear detect sensors built into each earbud. This now means that the infrared sensor in the earbud will pause the music when you take it out of your ear. A new interesting feature also added to these earbuds is the Movie Mode. This new mode makes for a more enjoyable time when watching movies with a low latency mode that avoids audio lag, now the voices sync perfectly with the screen. The Epic Air Sport ANC use Bluetooth 5.0, are IP66 Sweat & Water Resistant, and the case allows for wireless charging. 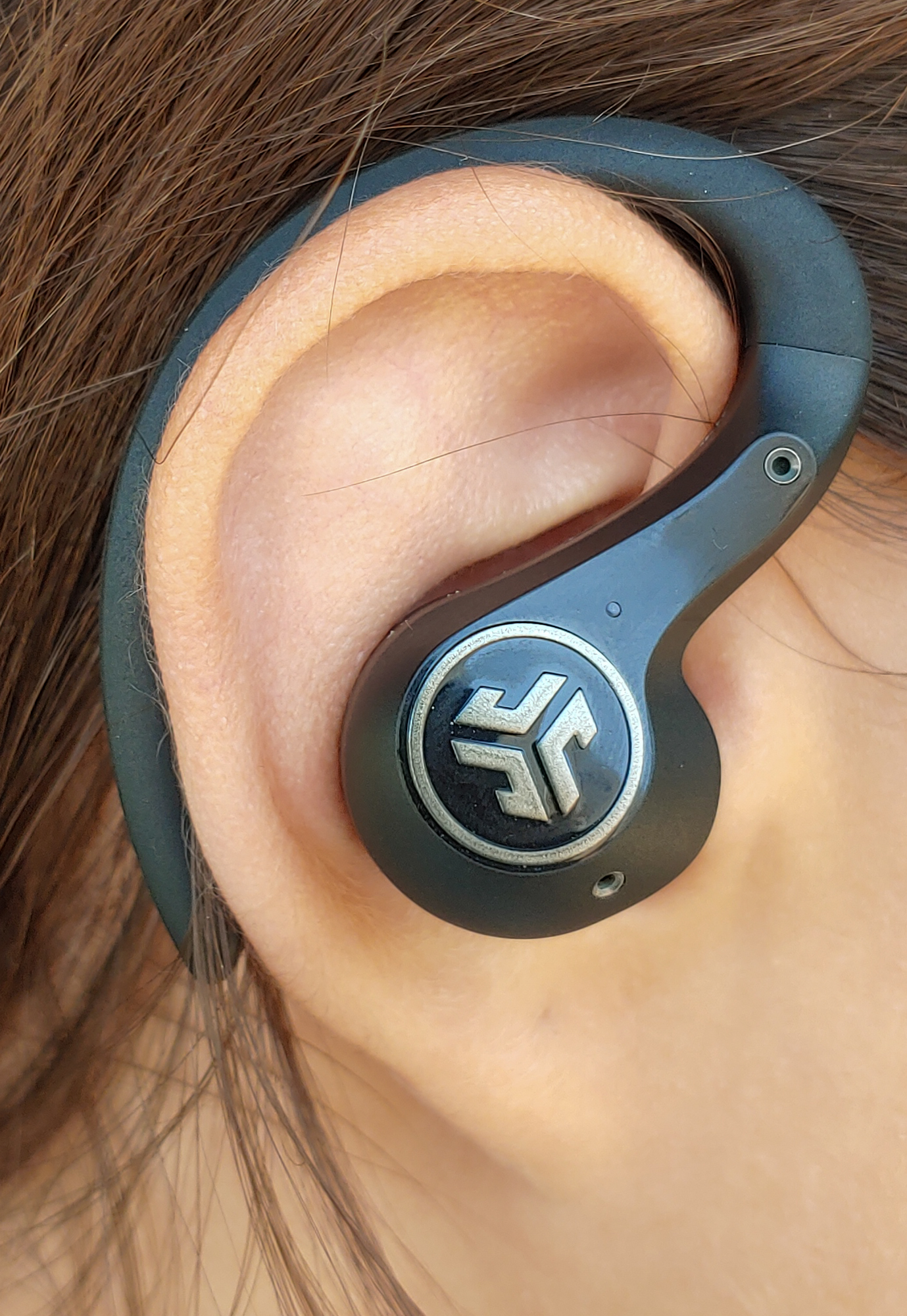 I had my daughter model these, she has nicer ears than mine : )

When looking at the Epic Sport ANC, they are made of a durable black plastic with an angled nozzle for the tips. The now ubiquitous JLab ear hook design is used to keep the earbuds in place, they are pliable and fit around the ear easily. I find them comfortable and the earbuds can be worn for a 2 hour workout at the gym without them bothering you. I have found the medium tips fit me best and that I have to move the them forward when in my ear to get a proper seal. I want to mention that these work while wearing a mask, I have to wear a mask at my gym and I had no problem. I also found that I got 40ft or more from these before they started to lose connection. I did not have any drop outs tested having my phone in my front or back pocket etc. 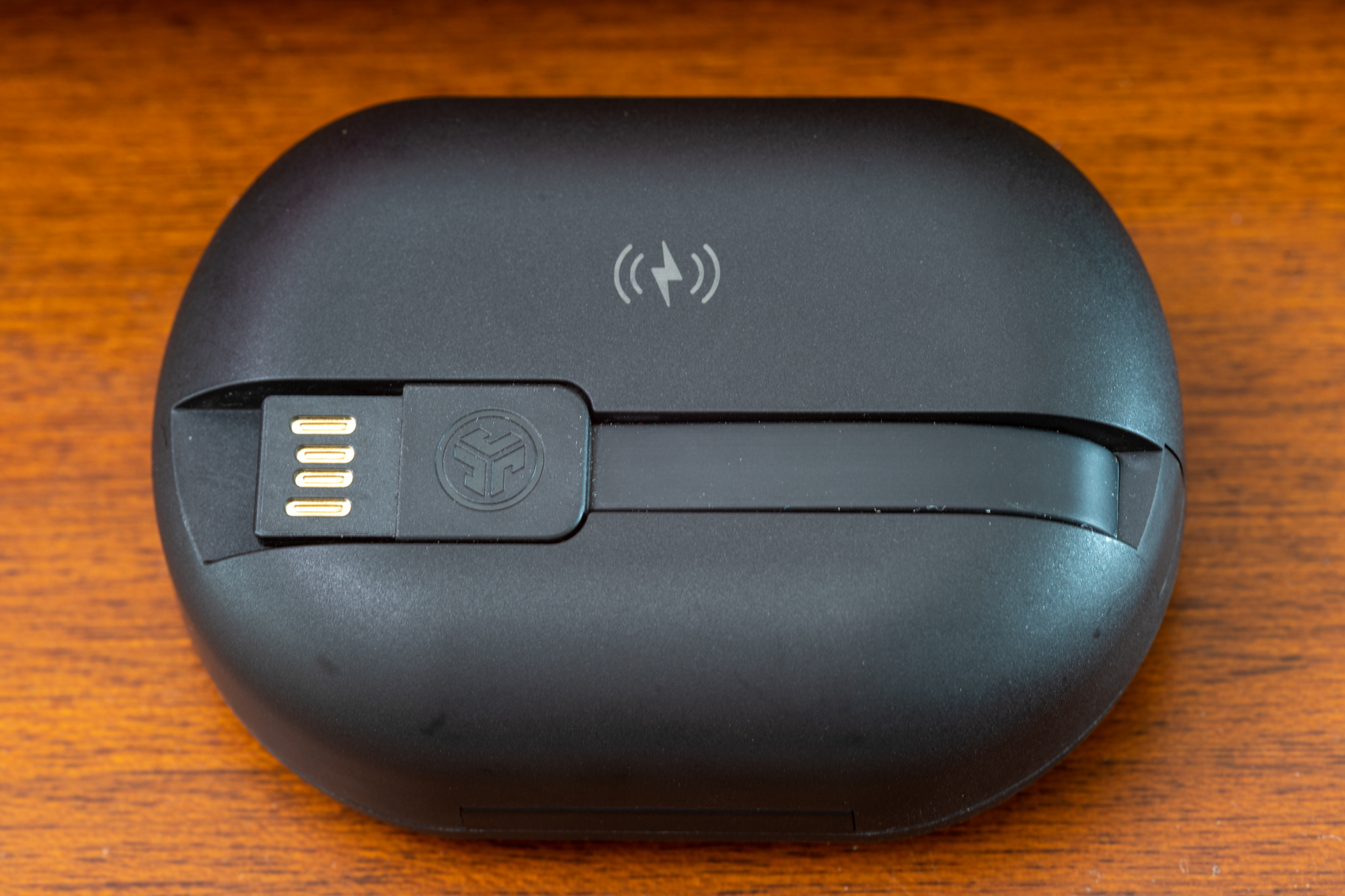 The case can be charged via usb or wireless charging

The case feels substantial but takes up a small foot print. It has 4 status lights to show what the charging level is. There is a usb cable builtin to allow for charging. Something new is the ability to charge the case wirelessly, which I think is a really nice addition.

The Epic Air Sport ANC utilize touch controls. When you take them out of the case for the first time, they are ready to pair to your phone or device you are going to use. After being paired, the next time you take the earbuds out of the case, they are already on and automatically connect to your phone. The controls become intuitive once you have used them for a bit. I am used to them because I have used other earbuds in JLab’s line of true wireless earbuds. For example, touching the left side lowers volume, and touching the right earbud raises the volume. I have broken down some of the controls below in a fairly easy to understand format: 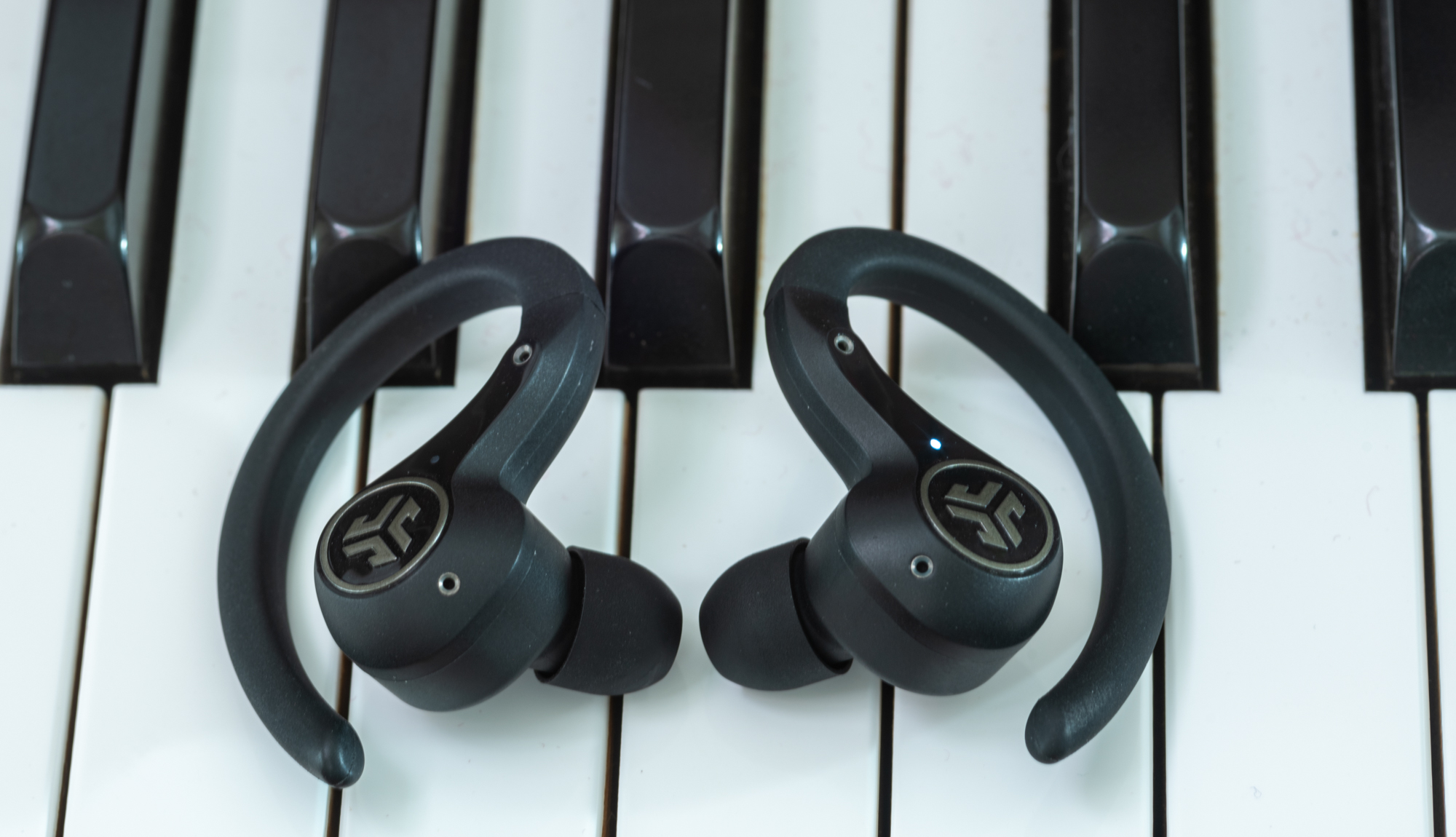 First off, I wanted to touch on the active noise cancelling (ANC). The noise cancelling works well, I used it at my office and it substantially blocked out the hum\fan noise from my server room. At the gym, it lowered the sound from the runners on the treadmills and dulled the clanking of weights a bit. The ANC also quieted the fan and air-conditioning noise. I think the ANC was great, although I turned it off outside when there was a wind, it seemed to create digital wind noise. The Epic Air Sport ANC come with 3 set EQs to choose from JLab Signature, Balanced, and Bass Boost. You can also utilize the app and change how each EQ sounds to fit your taste. On top of that, there are 4 EQ presets you can fool with to customize the sound of the earbuds even further. I found myself sticking with Balanced. Balanced had the best EQ setting for me though as I do not like too much bass messing with the rest of the overall sound. I am not a fan of Bass Boost either because as I already mentioned, I do not like the overpowering bass, but some might prefer that. I tested the earbuds on both my LG G8 ThinQ and IPad Pro. I used both flac, mp3. For music, I have about 128 gigs of music on my phone alone, covering all sorts of genres, from Classical, Rock, Jazz, and Thrash. I found them to have a fairly wide soundstage with good instrument separation, everything sounded fairly clear and crisp. I could not discern a change in audio quality with the ANC on or off. I also tried watching some Netflix on my Ipad pro. I did not notice any lag, voices were in sync. With the ability to EQ the sound, it really is up to the user how they sound, which is a nice change from their prior headphones. 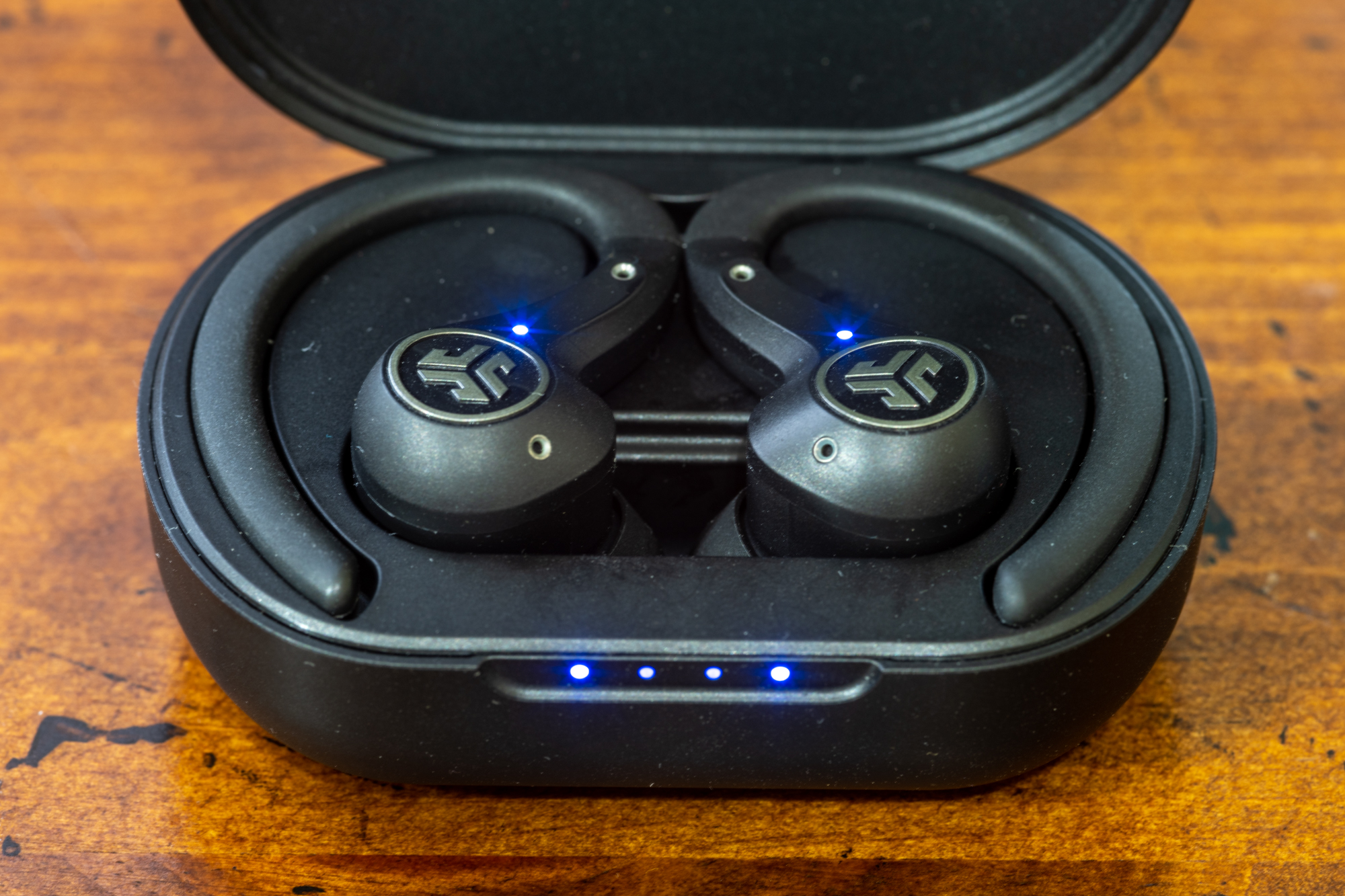 I used these for several calls during the course of my review. I used the Epic Air Sport ANC during a Teams meeting for work and they performed very well, there were no complaints about how I sounded. I called my elderly parents and they could hear me clearly. In fact, I made several calls while out walking my dog, in windy conditions and they all sounded great, no complaints. I had no problem answering calls, I encountered no problems. 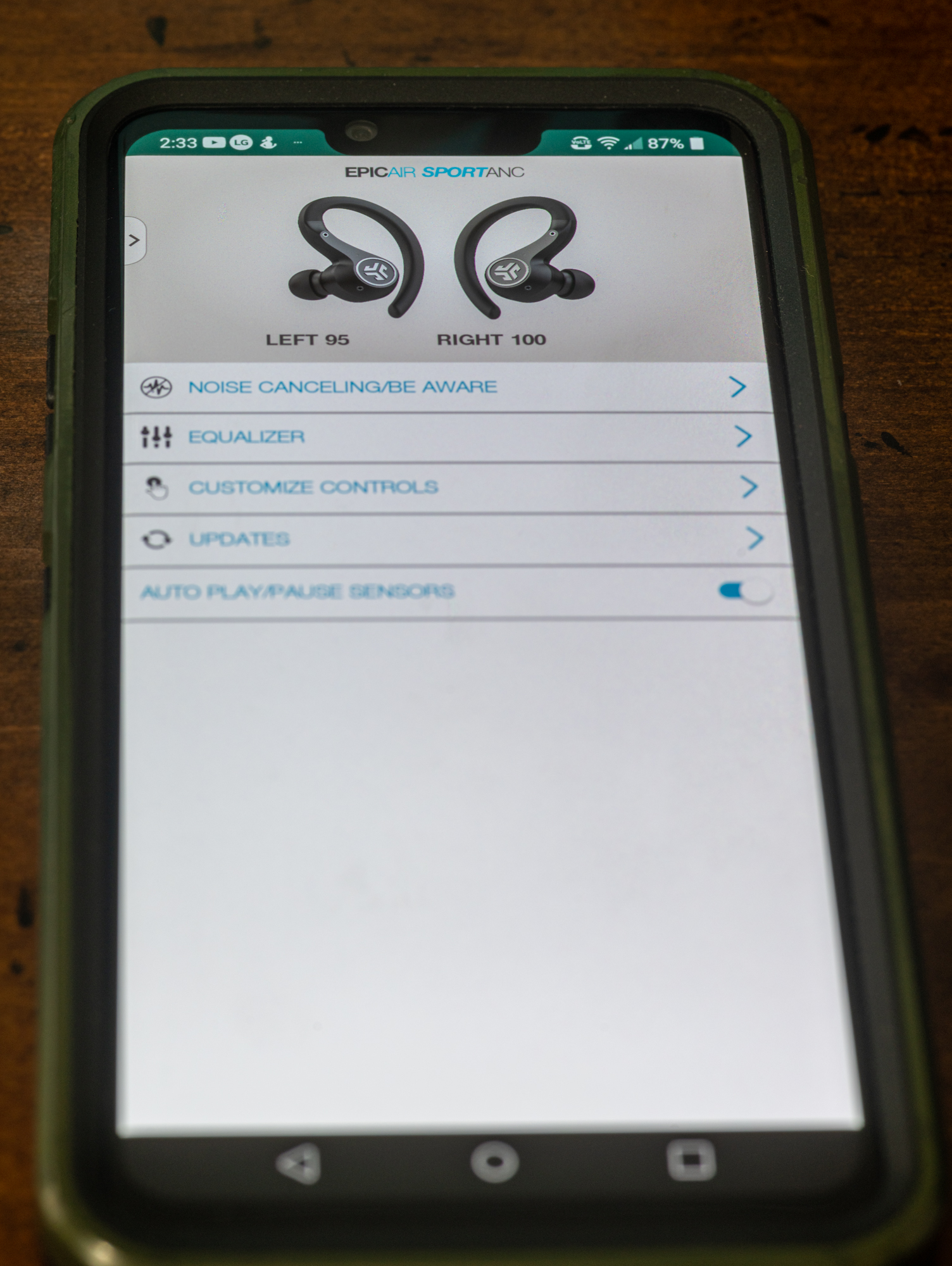 I initially used the app on my Ipad Pro, but then tried it on my LG G8 THinQ. The app is separated into 5 sections. It allows the user to change the level of active noise cancelling, and Be Aware. You also can change the EQ in the Equalizer section, there are 4 separate EQ settings, and also have the ability to reset it all if you made changes you do not like. You can also customize the touch controls, for those that would like to set that up differently. Another great new feature is these now can have their firmware updated to improve and add new features. I noticed there was an update already waiting to be applied when I first used the app and updated my Epic Air Sport ANC. Another part of the app allows you to turn off or on the auto play/pause sensors. 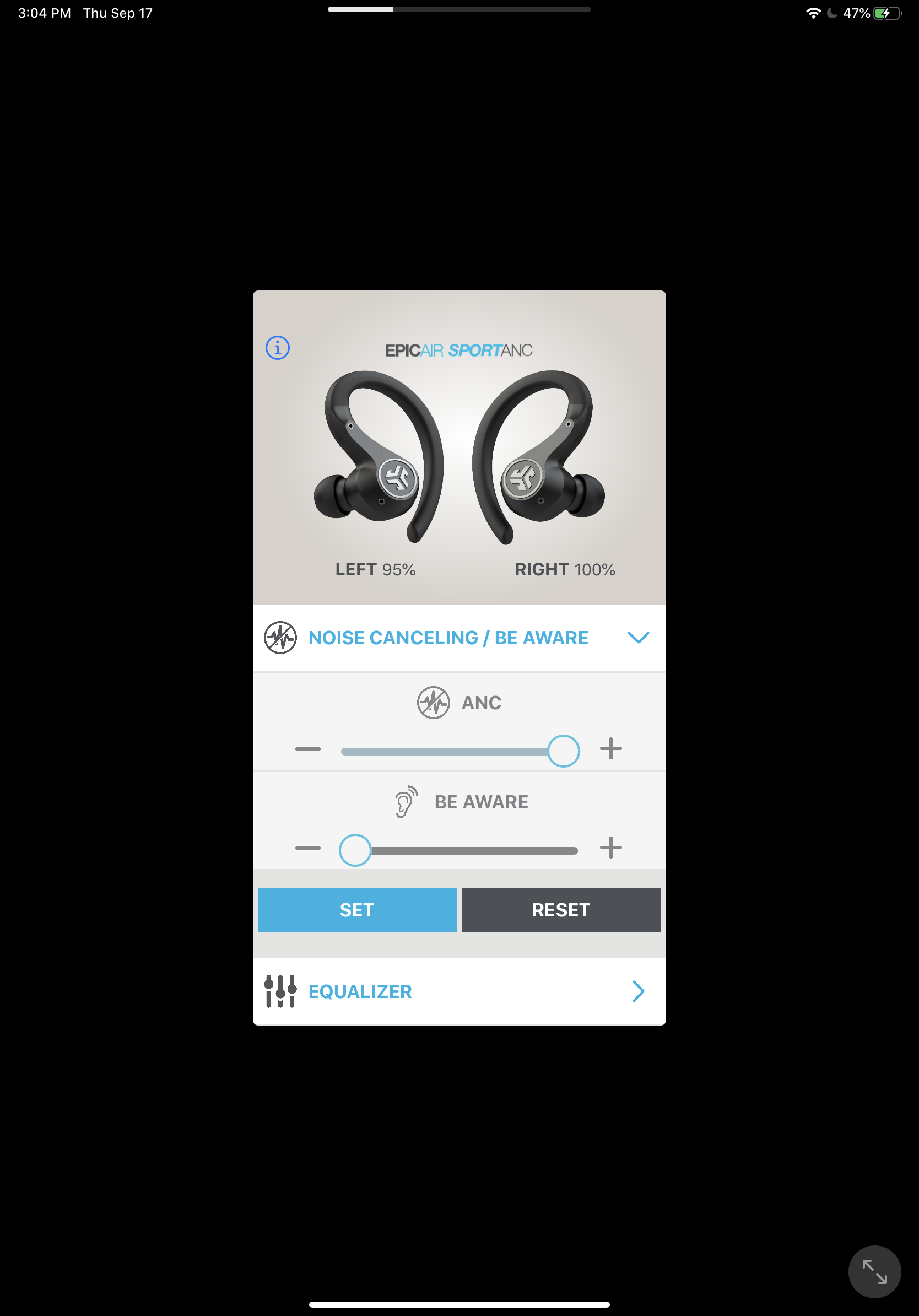 Screenshot of ANC and Be Aware in App 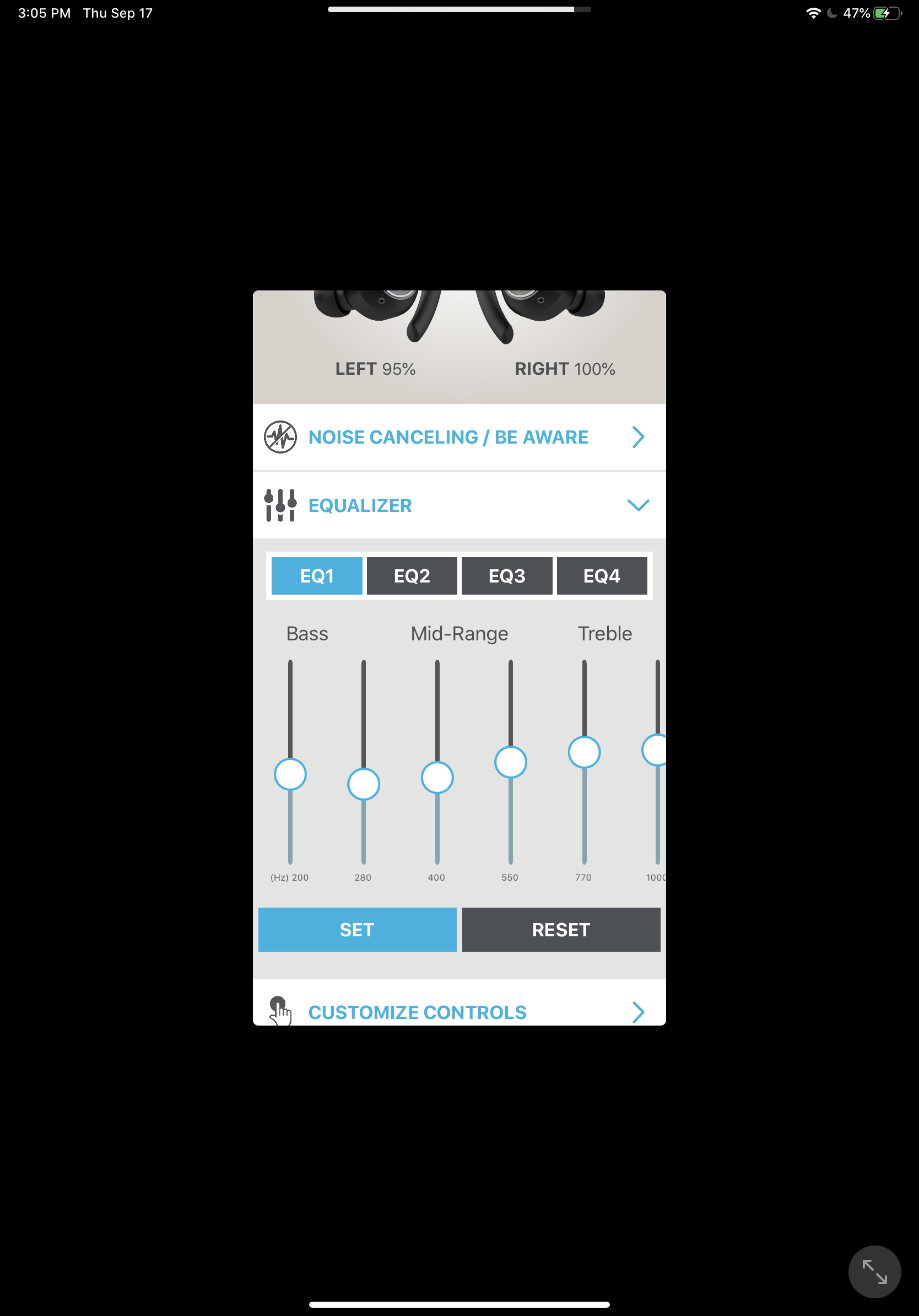 I am really impressed by these, they have great ANC, battery life, nice app, customizable EQ, and reasonable price at $99. I think that JLab has a winner with the Epic Air Sport ANC. Also they have a 2 year limited warranty and 30 day money back guarantee. I can easily recommend these to someone who is looking for affordable and great sounding earbuds.

Like the review! I just got mine this past weekend, and I have enjoyed them so far. I have to admit, I didn't buy these to just wear around. I only run with these. They have been great for that, especially using the longer tips. They have good isolation, sometimes a little too much. I don't use the ANC while running, because there is actually a digital wind noise that makes it sound worse. Because of all the wind noise and breathing noise and traffic noise, I prefer using the signature sound setting. It increases the bass and treble just a bit and keeps them from getting lost in all that background. Although I paired them with my phone, I use them exclusively with my Garmin watch. The connection is good, but I do have to turn the volume up a little higher than with my old JLAB Sports. They still easily go loud enough for me, especially since I'd like to hear things like trucks and buses. If you are a runner, these are a no-brainer. FYI, I used my old pair for an entire year, and my sweat nor the occasional cloudburst downpour managed to kill them. That may sound like nothing, but I had killed 4 different sets of "sweatproof" bluetooths inside a month each before getting my first pair of JLABs. I don't expect these to wear any differently, maybe better since the longer tips seem to block out more sweat from getting in my ear canals.
I am glad you like the review, I mentioned the digital wind noise in the review. I also disable ANC when outside with them. On my android phone, I paired them so that the music app volume and headphone volume are separated if that makes sense. I have more granular control over the volume. I find that they are plenty loud for me at vol 2 lol. I have used them cycling myself and have found them to be quite good, I never touch the Be Aware more, I just dont have them loud. A thing I would do is not put them back in the case when they are soaked, let them dry out. It can sometimes fry the case. For the old jLab set, try some deoxit to clean off the connectors on the earbuds and case. They just might not charge anymore because they are dirthy?
**I meant dirty not dirthy.
Oh, my old ones still work just fine. I gave them to my 8yo, and he uses them with his iPad.
Just ran a few miles in a light to moderate rain with them. They are not phased. Sounding slightly better too, as I use them a little more. These might sound more even, less bassy, than the older jlabs.
They do seem less bass orientated and more balanced to me also.