Hybrid Driver. GuideRay GR-I series is equipped with a custom 10mm dynamic driver and a balanced armature to reach a balanced low, mid, high frequency performance. The bass is strong while the mid and high frequency focus more on the details and dynamic changes

Ergonomic Design. GuideRay GR-I series is made from high quality resin which is molded based on large data to fit in your ear snugly. The pre-shaped earhook also enhances the stable and secure fit. Feel free to wear it for any occasion

12-Month Warranty: We are dedicated to give to utmost importance on our users’ satisfaction which is why we made sure to include a 12-MONTH limited warranty security for your audio investment, keep your mind and ease and focus on your audio sessions more 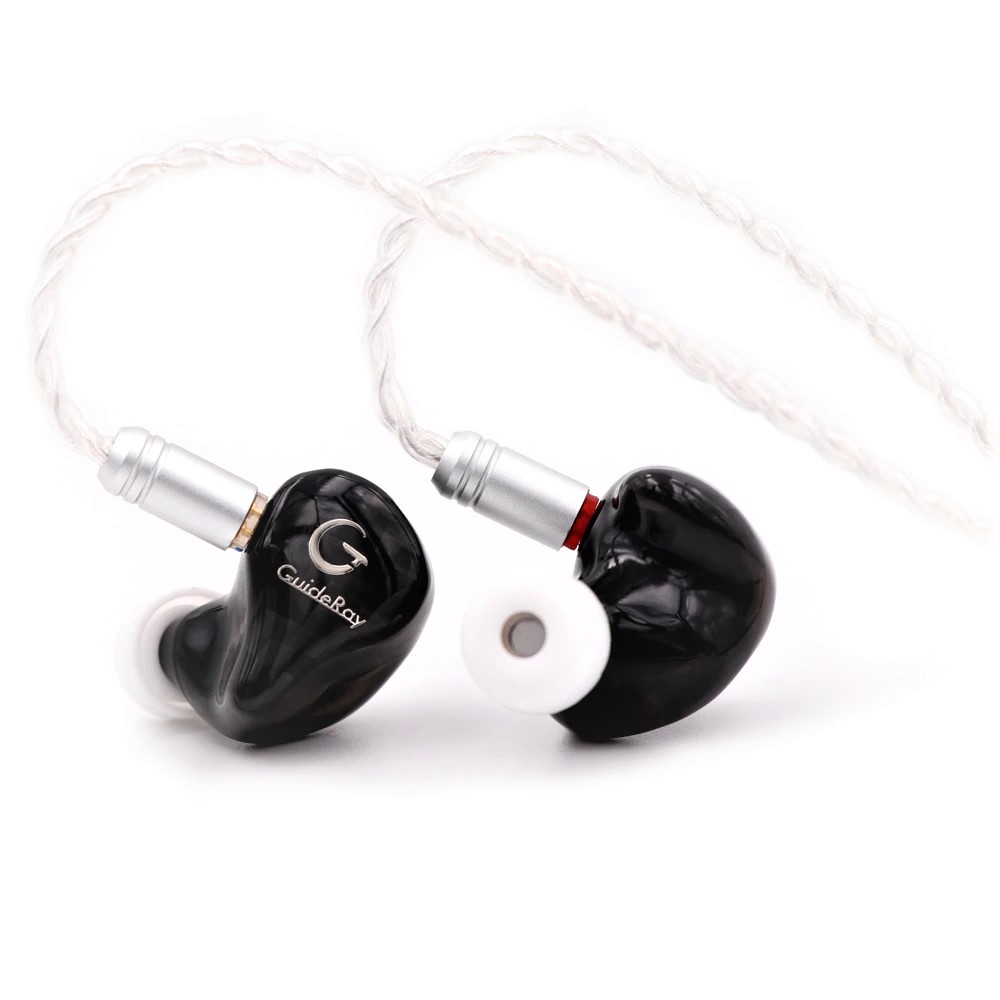 Disclaimer: I was provided the GR-i68 to review by Linsoul Audio. I have no financial interest in GuideRay or Linsoul, nor have I received any incentives for this review. If you have an interest in this iem after reading the review, Linsoul Audio has them in-stock and ready to ship. Linsoul can be found at their website, facebook, Ali-express store, or Amazon store.

I had not been introduced to Guideray prior to the GR-i but their website shows they have been making audio gear since 2011. Interestingly, some of the products are recognizable as either being the OEM for other brands or close copies thereof. If you are interested in more information about Guideray, their website can be found here.

You will see three models that are all the GR-i. The GR-i18 has a purple shell and wood face-plate, while the GR-i58 is blue with an abalone look face-plate and the GR-i68 is black with a carbon fiber face-plate. Internals are all identical in all three so while this review is specifically about the 68 series, the sound notes will be equally applicable to the 18 and 58s.

The GR-i comes in a lift-top box with the image of the earpieces on the front and the company info on the rear. In a departure from the norm, specs are on the side of the package rather than the rear. Lifting the lid reveals a card-stock covered foam tray with the earpieces displayed. The cable, manual, warranty card, and 6 sets of tips (3 single flanged donut style and 3 double flanged in SML). The addition of a a case would be welcomed as the kit is fairly minimal.

The inner shell is 3d printed using a synthetic resin with the face-plated being hand-fitted and polished. The upside of this style of production is the ease with which changes in color and design can be made by using the printer to do a lot of the work. Hand-fitting the face-plates allows for a level of polish not normally seen on machine made designs and also allows each iem to be slightly different as the pattern, color, and even angle of the face-plate can be altered. In this case, it can be tough to tell as the carbon fiber mesh is pretty symmetrical and doesn’t have a lot of distinct features, but having seen several pairs they do indeed have variations in the alignment and positioning. Build is well done with no gaps, glue, etc and it can be hard to tell where the face-plate ends and where the inner shell begins. Shells are mid-sized wtih the nozzles exiting the front edge of the shell with an offset that gives the nozzles a very slight upward rake. Comfort was good for long listening sessions without a lot of physical fatigue as some can cause.

The GR-i is a dual driver hybrid utilizing two custom tuned drivers. Low-end is provided by a 10mm dynamic driver while mids and treble are handled by a single balanced armature. The printed materials list dual sound bores and removing the screen in the nozzle does indeed reveal separate tubes for each driver. Nominal impedance is listed as 19Ω with a sensitivity of 100 dB/mW. I found the GR-i worked well from a phone or tablet and while it did scale some qualitatively with better sources, it does not need an external amp to be used with a phone or tablet.

The provided cable is silver plated single crystal oxygen-free copper in 4 wire twist up to the splitter and two paired twists above that. At the south end, the 3.5mm gold plated jack is of the 90º variety that I prefer with a brushed aluminum and clear plastic housing with a proper strain relief. The splitter is matching brushed aluminum while the chin slider matches the clear plastic portion. The North end terminates with pre-formed earhooks, brushed aluminum housings, and .78mm bi-pin connectors. Connectors are extremely well marked with both L/R markings, a red housing, and blue dots to show the front pin. If you manage to get this plugged in incorrectly, you had to work at it.

The GR-i ships with six sets of tips, three single flanged shallow donut types and three fairly shallow double flanged tips. Unfortunately for me, none were a great fit and were comfortable at the same time. I found that the large size were quickly fatiguing and the mid size were too small and resulted in poor seal. I did a good bit of tip rolling and found the KZ starlines to work well for me. I did my listening tests with the KZ tips as it was the best option for me. Be prepared to do some tip rolling to get the best out of the GR-i

Sub-bass is boosted and provides good slam and rumble with the peak of the boost at about 100Hz and roll-off only becoming notable in the 30Hz range. The mid-bass is well boosted, but steps back from the sub-bass and eventually bottoms out as it heads into the lower-mids. Bass control is fairly good with attack being a bit slower than decay (reverse of some others). This gives the bass good weight and a bit of a thickening without sounding muddy or flabby. Texture is reasonably good for an iem in this price range, but will lack some detail compared to models at higher price points.

The mids are definitely not the focal point of the GR-i with lower-mids being considerably recessed compared to the mid-bass. The lower mids are somewhat colored by mid-bass bleed and give the GR-i an overall warm and somewhat dark tonality. As you move up, the mids start to move a bit forward but remain well behind both the lower treble and sub-bass peaks and create an odd circumstance. Vocals are behind a lot of the other instrumentation. While listening to the Doobie Brothers – Rockin down the Highway, at times the piano is well in front of the vocals and at other times the rhythm guitar is out in front. Mids manage to have good details in spite of this, and the GR-i is more resolving than expected.

There is a pronounced lower treble peak that defines the north end of the V along with the 100Hz bump at the lower end. Above that peak at roughly 4.5kHz, the treble drops off fairly quickly with a couple minor peaks at roughly 8kHz and 10.5kHz that attempt to add back some air and sparkle. Neither is entirely successful as cymbals come across a bit metallic and overly forward and snare rattle is a bit lifeless. To my ear, the treble is the weak point of the GR-i with a combination of a lower range that can be a touch harsh at times and an upper-range that rolls-off too soon and can feel a bit closed off. I’d love to se the next generation of GR extend the treble a bit more and bring the lower treble down a notch.

Stage on the GR-i is defined by the vocal positioning and seems deeper than wide due to that recess. Stage width is average or a little better while depth is deeper than average for the class. Seating the orchestra does have some anomalies as some instruments are more forward than they should be while others tend to sit a bit further back than normal. Instrument separation is good but when combined with the signature can feel like there are two rows of instruments and each falls into either the front or rear line. Spatial cues are well rendered partially due to the above average detail.

For a first release, the GR-i is quite the looker. The shells are well made and the face-plates give them a unique touch. Sound wise, there are some things that are very traditional like the deep-V signature and others are distinctly different like the attack being slightly slower than decay to provide a bit thicker signature than others in its class. While having the obvious lower treble emphasis, the signature below that borders on the dark but maintains reasonable detail and clarity.

Reading the details of the sound signature might lead one to think I didn’t particularly care for them, but honestly depending on genre, they can be a lot of fun. While not well suited for jazz or orchestral pieces, the GR-i can be a lot of fun for rock, pop and hip-hop.

If you like a signature that is a a bit thicker and darker than the standard sub-$50 fare, you may well like the GR-i too.
Reactions: Luan Lima
Read more…