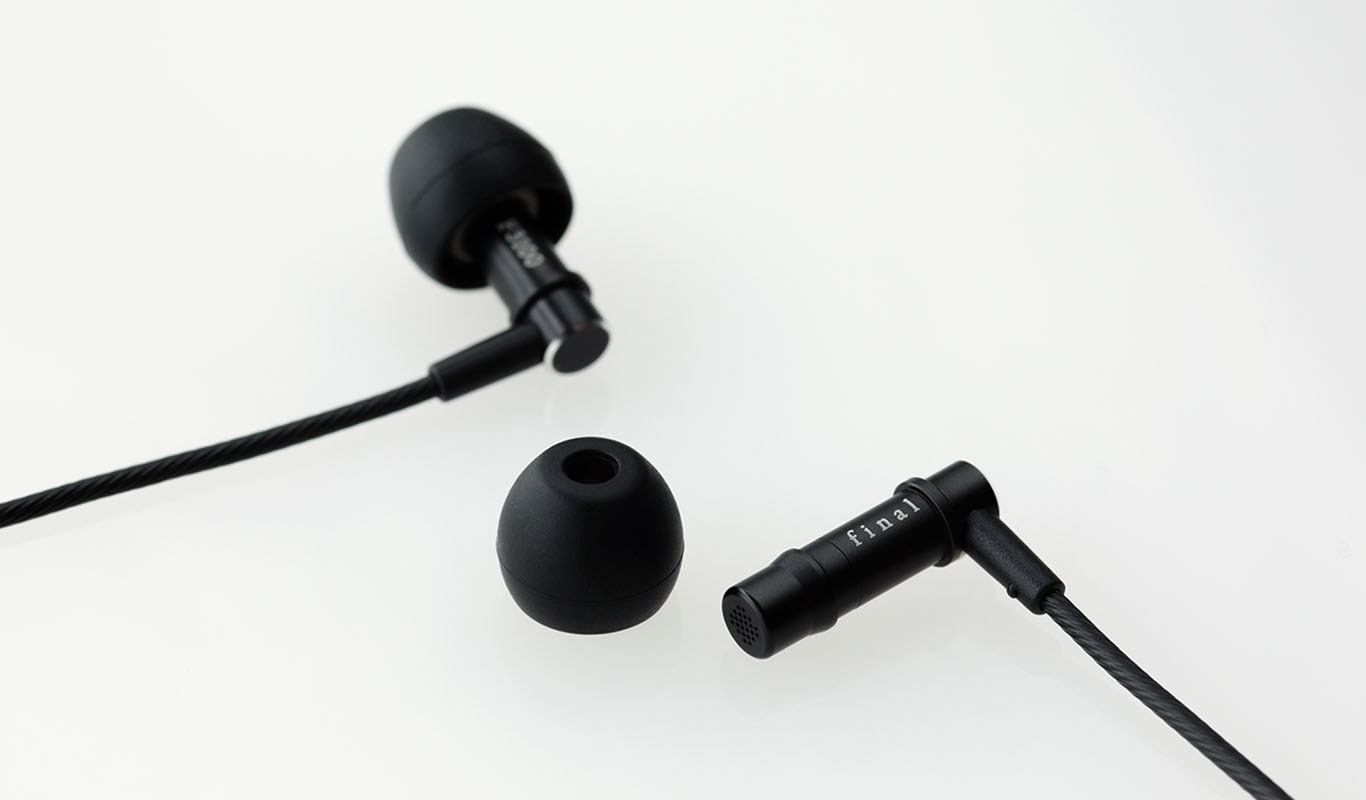 Extremely small and lightweight, with a perfect fit and high sound insulation properties. Situated close to the wearer's eardrum and being highly airtight, this model delivers high resolution, a vast sound stage and clear bass tones.
Bringing the driver unit closer to the ear drum, achieves an even more realistic, vivid sound quality. In order to achieve this in the F3100, we have meticulously downsized the housing with a design consisting
of the minimum possible elements. Miniaturized to have a diameter of 5.5 mm, the housing is finished with
a hard aluminium-magnesium alloy anodic film. This also contributes to weight reduction. Final's unique method of using full-range balanced armature drivers across all models recreates bass tones with a fullness you would never imagine from the housing size. The cable is high purity OFC. The earphone comes with an ear hook to prevent microphonics from the cable.

The entry model for the F series, this earphone realizes sound quality and ease of use in a higher dimension and is tuned to emphasize reproducibility of lower tones compared to the F4100.
Share:
Facebook Twitter Reddit Pinterest Tumblr WhatsApp Email Link 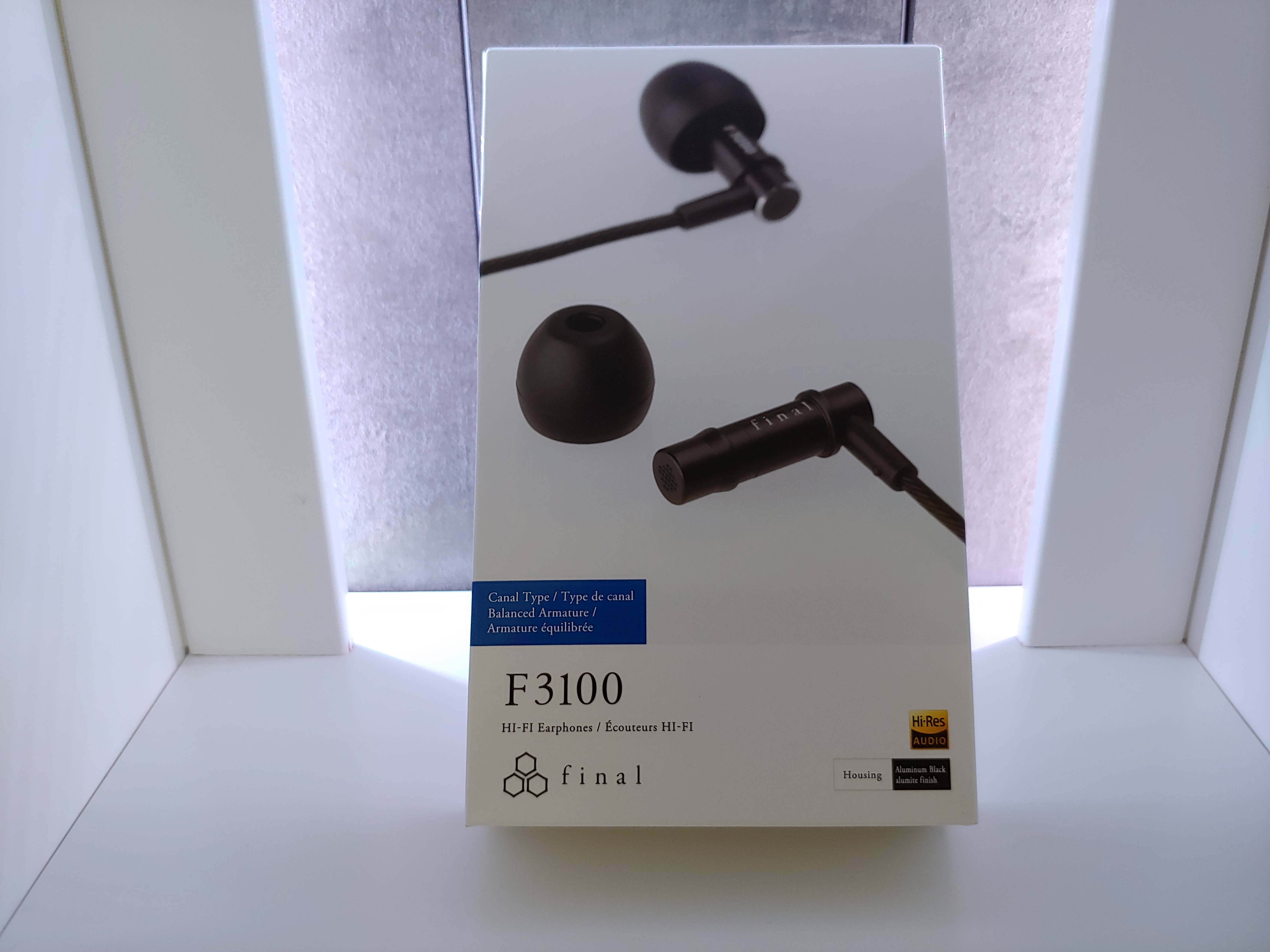 Disclaimer: Bought at my own expense at Amazon japan.

Disclaimer 2: This review is based on the price I got it for which is 87 usd and again no discounts or anything like that was applied for me, just bougth it like a regular customer. 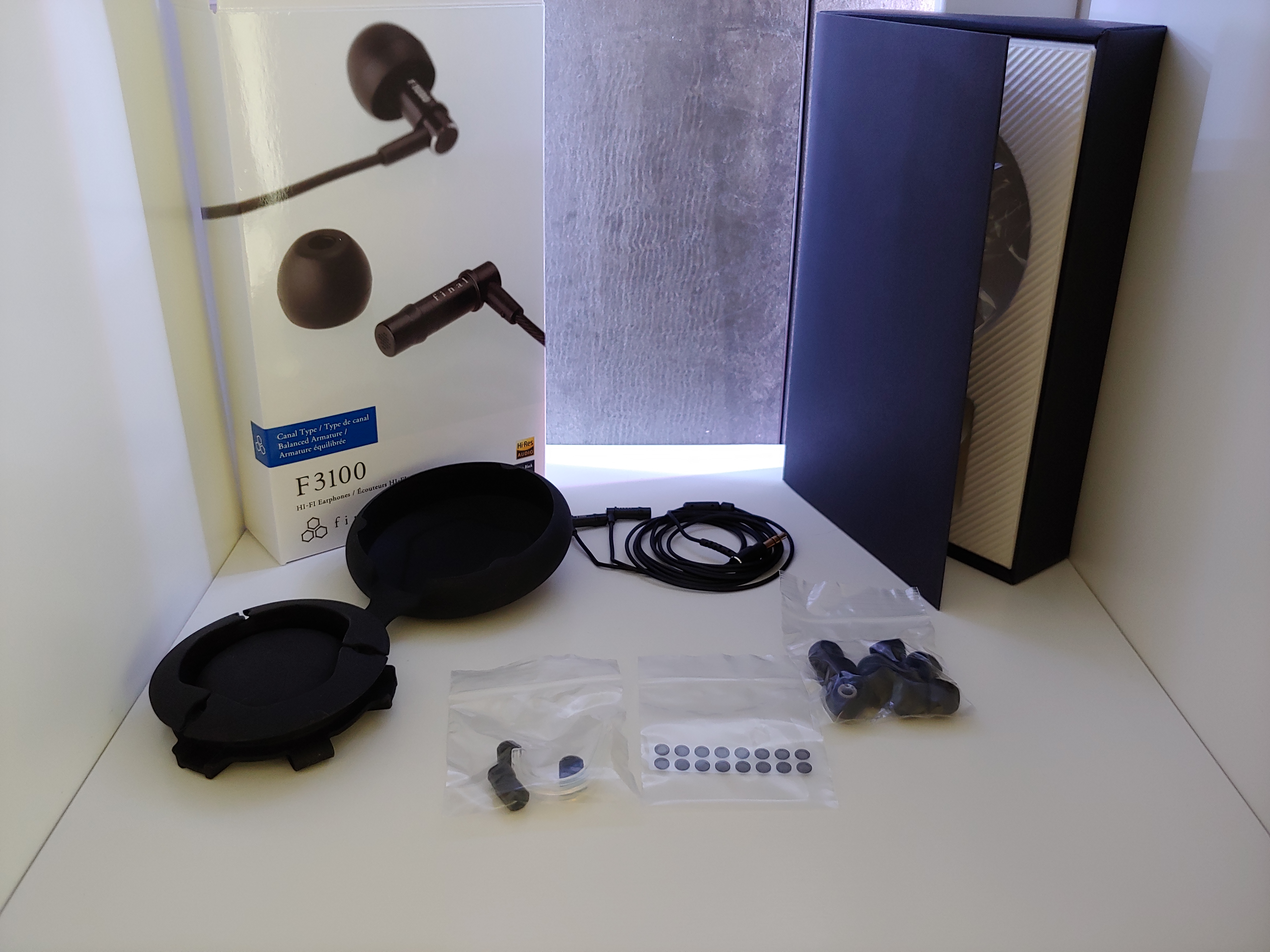 The foam tips were in another spot so they aren’t in the picture.

Silicon Type E tips SS/S/M/L/LL (doesn’t have different colors for L/R, like the ones in the E series) 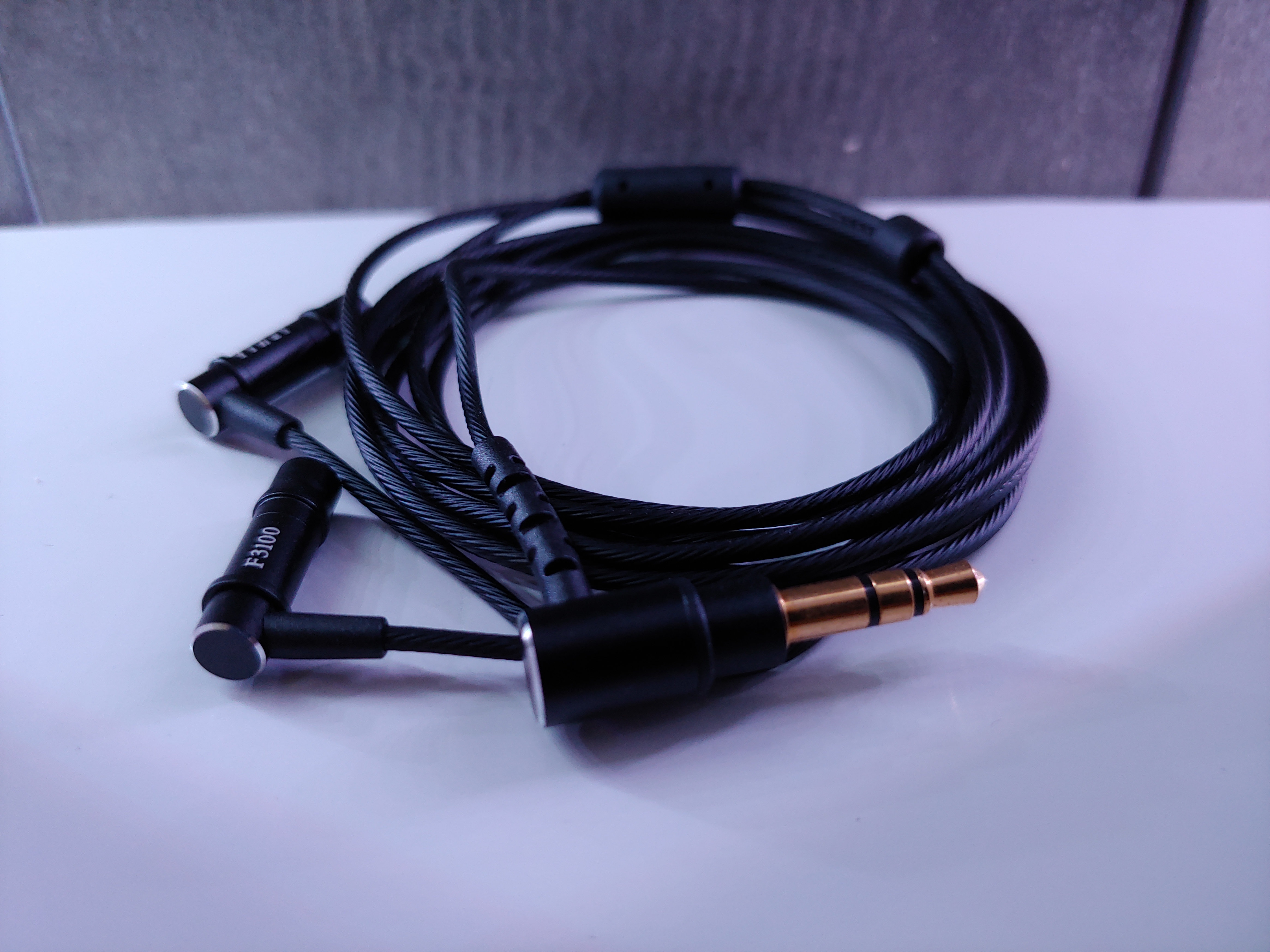 Cable: Here we have a thinner than a noodle cable, that is non-detachable. While the surface feels nice and durable, the thinness makes me very worried about the durability/lifespan of the cable. Very disappointed that they didn’t use a detachable cable instead. The cable has microphonics and is recommended that you use it over ear style. (especially if you use it with deep fit). 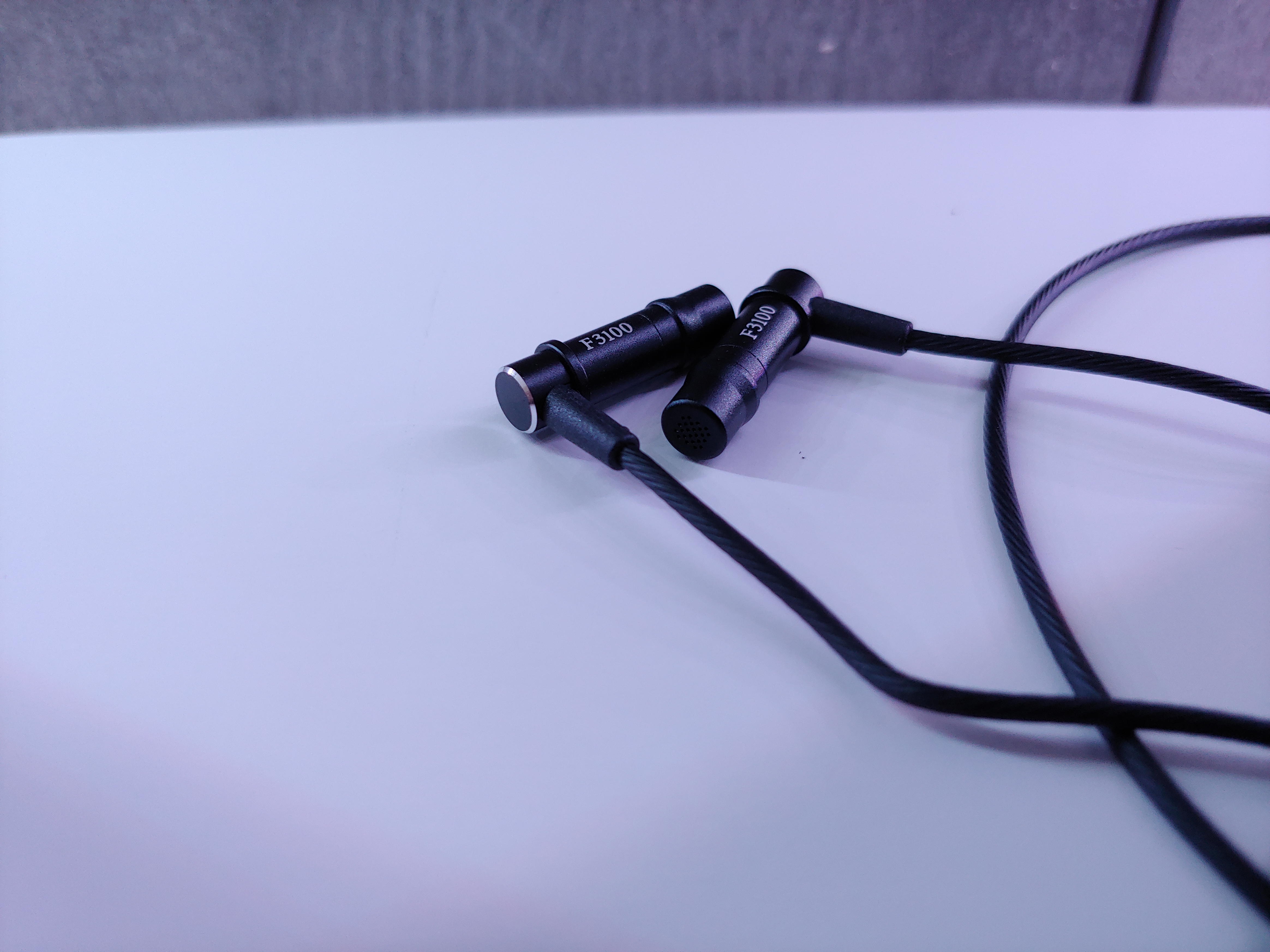 Build: It is an extremely small and very lightweight iem. The build itself is made out of aluminum. The L/R markings are on top of the iem and written with a white text color so it is very noticeable and there is a small physical dot that marks the left side. Although with the small size of the iem that dot might be very hard to actually feel.

Fit: The fit is unique in that you can chose to either insert it like a normal bullet style iem or you can insert it deep (you need smaller tips if you use it deep, I use S with it while normally I use L (LL with type E tips)). I found that using it with deep insertion, it could use its full potential more than a normal fit. While using the deep insertion, I found the fit to be great but with the added downside that the cable microphonics were a lot more noticeable and therefore required an over-ear style.

Comfort: I was worried that the deep fit would be uncomfortable but surprisingly it is very comfortable, the small size makes the heat generation lower than average and is great for long sessions.

Isolation: This is the best isolating iem I have ever tried, it beats the Audiosense DT200/T800 and the Dunu DM-480. If you need isolation this is going to do it for you.

Lows:…Nothing much to say about it besides that it is absolutely garbage in every way. The bass quantity is below anemic/non-existent I can’t understand just how little bass there is in it. Even dismissing the quantity, the speed is so fast that it isn’t natural at all its like when the bass attacks it is gone instantly and you can’t really enjoy/hear it. Extension? It doesn’t even rumble at the slightest level, sub-bass that should rumble, sounds like a very fast/tight low quantity mid-bass on other iems…

(Normally I would go into the sub and mid-bass here but I already gave my thoughts on the bass….)

Mids: now this is one of the only good things about the sound of the F3100. The vocals are detailed and crisp but male vocals are too thin while female vocals are borderline sibilant on most rock/metal tracks. On more calm/emotional songs like Hiroyuki Sawano – Solitary Serenade it has quite beautiful vocals and the piano sounds very natural. Then there are electric guitars on rock/metal that sounds too bright and unnatural (for example on Amaranthe – Maximise 02:10-02:26).

Female-vocals: Sounds good on emotional tracks but on anything bright sounding that is rock/metal it is borderline sibilant.

Male-vocals: no body to it due to the bass and definitely too bright, makes it sound unnatural.

Highs: Some sharpness on rock/metal and isn’t natural, string instruments in the track Interstellar Ascension is too thin, bright and not textured. Nothing good except the detail retrieval, but that is due to the treble quantity overall.

Tonality: Reverse L-shape that is bright, analytical and thin sounding. Timbre is also bad, not to talk about the bass…

Instrument Separation: Very good separation but is definitely helped by the anemic bass.

Hisenior T2: Treble quantity is lower not sharp at all and a little bit more natural while having less details on the T2.

Quantity on the mids is similar, but quality is much better on the T2. Male vocals have more body and the warmth it needs, female vocals are natural and clean without sharpness.

Bass…it exists!!! The T2 sounds like a basshead (it isn’t!!!) iem coming from the F3100… The speed in the F3100 is faster but too unnatural but it is tighter and cleaner.

Details, instrument separation and soundstage is much better on the F3100 while timbre is equal.

Overall the T2 has much better sound quality except for the technicalities (details, instrument separation and soundstage). T2 is the better choice if you want a mid-forward iem without losing the bass and treble. F3100 is better if you want isolation at all costs (it is thinner and analytical, while the T2 is fuller and more fun).

Tin Hifi P1 (micropore mod): Treble is much more even and without peaks on the P1, while being much more detailed and natural.

Mids are heavenly on the P1, male/female vocals are very balanced, detailed and natural.

P1 is a basshead in comparison to the T2 (P1 is almost anemic with the micropore mod too) and makes the P1 seem like a DD (it has texture, punch, speed, tightness, just superior in every way).

The P1 is absolutely destroying the F3100 over and over again….no contest at all. Guess the only reason you want the F3100 is again for isolation and for something easier to drive (THE P1 IS STILL BETTER EVEN WITHOUT MUCH POWER!!!).

Audiosense DT200: The treble quantity is lower on the DT200, it is more detailed and natural.

Female vocals aren’t as forward on the F3100 but still more clean, detailed and natural. Male vocals have the body and warmth it needs.

Bass is again much better on the DT200. Much more texture, powerful while being more natural because it doesn’t have the unnatural speed of the F3100.

Soundstage, details, instrument separation and timbre are much better on the DT200.

ThieAudio Voyager 3 (up-up config): The treble quantity is lower and has a warmer sound overall on the V3. More detailed and natural.

Bass is better on the V3, more texture, powerful and more natural.

Soundstage, details, instrument separation and timbre are much better on the V3.

Conclusion: Well, this was one big disappointment. This is incapable of reproducing bass which means that the majority of songs aren’t able to be played on it and for those that don’t have bass the unnatural timbre is just bad. In conclusion the only reason to get this is because of its great isolation. Thanks for reading and thank you for releasing my ears from captivity.
Reactions: Toastybob and baskingshark
Read more…