Pros: Neutral Sound Signature
Cons: Need to build them into a pair of headphones yourself
As an avid DIY’er and Grado Modder, I am always on the lookput for new drivers, cabling ideas, cup designs, etc, etc…I turn my own cups in my workshop, and primarily like to use vintage Grado SR80 drivers, the pink variants. I also have a penchant for the Symphones Magnum drivers.

SR80 “Pinks” are Grados built in and around the mid-nineties. They are named “Pinks because the cheesecloth over the driver grill fades to a shade of pink with age. The cheesecloth has no magical powers to impart upon sound signature, but, it does indicate the drivers are tuned a certain way…a way more in synch with the way Joseph Grado used to tune his drivers. They tend to be more neutral than the current drivers used by Grado, with a less pronounced mid-bass bump, and smoother, yet still articulate, treble.

The Symphones Magnums tend to have a little less soul than the Pinks, but better extension on both ends of the spectrum, with the bass hump pushed down a little deeper.

Why am I prattling on about the SR80 Pinks and Magnums? A while back I came across a website for a company called Elleven Acoustica. They had metal cups, Mahogany sleeves, RS1-type and GS1000-type Mahogany cups for sale. I noted them down mentally, but was disappointed to find the site shut down later.

A while went by, and a fellow modder brought them to my attention again. The site was up and running. This time, it had those GS1000-type cups, the RS1-type cups, no sleeves or metal cups, some very nice looking Gimbals that come with a headband of springsteel, a cable and of particular interest: drivers.

I contacted Elleven Acoustica and spoke to a nice gentleman by the name of Chris about the drivers (called Ypsilon on their website). He described them as tuned for neutrality, and optimized for use in a tonewood cup, with a press-fit. This intrigued me. The Magnum V6, per Rhydon, has been tuned to be as consistent as possible, regardless of enclosure, and mounted with a foam strip. I noticed also that unlike any other driver I had seen, these were encased in aluminium. Aluminium is usually a source of ringing and tempered with a wooden inner sleeve in the world of Grado modding (Rhydon bucked this trend as well a while ago when he did his all-aluminium headphone builds…even these had plastic casing on the drivers though).

After a little back and forth, Chris was kind enough to offer me a pair of drivers for review purposes. Consider this my full disclosure. I am not employed by Elleven Acoustica and receive no financial compensation for this review.

Per the instructions and specifications included with the drivers, I made a pair of cups with a press-fit seating using Black Limba for the body and Rosewood for the end caps. During our discussions Chris and I had talked cup-length. I usually make the inner chambers of mine ¾ of an inch long. This usually makes the total cup length 1 and ¼ inches long. Chris said this was more or less in keeping with his requirements for good results. I made the cups narrow enough on the outside to be used with the headband from a pair of Sony MDR7502 headphones, and when I did final assembly, used a cable made from basic Mogami sleeved in black paracord and terminated with a Rean 1/8th inch jack. The cable was made by fellow Head-Fier and MoT, PETEREK. The drivers themselves arrived in a neat little wooden box bound with twine. They were sandwiched between foam inserts. The contact pads had a dollop of solder on them already, one colored red to indicate the positive terminal. They differed from all other drivers I have used in that they had those aluminium shells, as well as a different magnet….it appears to have 4 holes on its back instead of two. In addition, they seem to have a smaller diameter for the voice coil, and the felt on the back of the driver is positioned under a ring of plastic instead of over it. Chris had advised (and the documentation with the drivers had reinforced) that the drivers need 20 hours of burn-in to sound their best. I have heard burn-in working before. I have also heard it not working at all. Debate it all you want, I am not interested in the discussion. The man designed the drivers, the man told me to burn them in, I did as advised. Personally I heard distinct changes over that 20 hour period as I checked in randomly out of curiosity. Most notably, the bass started out boxy and mono-tone, by the end it was deep, had lost all boxiness, and was tighter than a [insert inappropriate simile or metaphor here].

I listened to my build with several genres of music, from multiple time periods. I listened to vinyl via my home-rig (an Advent Model 300 amp and a Technics SL1200MKII) and I listened to FLAC files at 16/44 on my Pono player and my Sansa Clip+. I also pulled out my “old-school” rig, a FiiO E12 strapped to an iPod Touch (1st Gen) playing ALAC at 16/44. 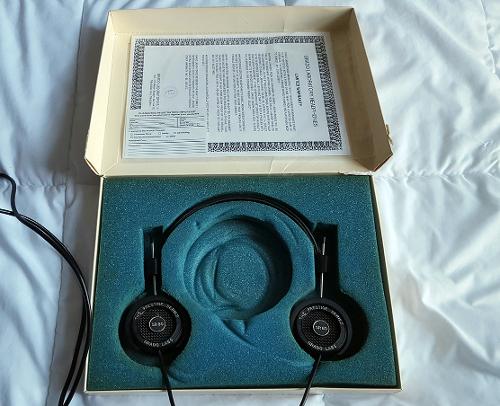 My impressions? The Ypsilon were indeed the most neutral of the lot. Compared to the Magnum, they had less bass, which could be perceived as more controlled bass by some. Their highs were a little less aggressive as well. The Magnum V6, by comparison, has a bass boost on it, albeit a little lower down in the spectrum than modern Grados. It sounds more “fun”. Compared to the Grado SR80 Pinks, the Ypsilon was more reserved. Both were almost equally neutral. Somehow the Ypsilon sounded more “polite” though.

Unfortunately I have never had the pleasure of hearing a pair of the old, HP-series Grados (if anyone out there wants to lend me a pair for a few days, I am totally trustworthy, I swear…). I would have loved to have heard the Ypsilon next to them. For my personal preferences, I lean towards listening to the Ypsilon more than any of my other headphones at the moment. Post burn-in, it is the most “honest” headphone I have at the moment.

After posting this review, my intent is to share them with a few Head-Fiers I have already spoken to, to get their opinions on them as well. If appropriate I will add their thoughts to this review.

In the grand scheme of things, the DIY market has never had it so good…we now have two extremely competent drivers that cater to both sides of the listening coin: those who seek neutrality, and those who seek a “fun” signature. It might even no longer be necessary for me to hunt out on eBay and hoard those old SR80 pinks anymore. I wholeheartedly endorse the Ypsilon by Elleven Acoustica, and feel it deserves equal consideration when folks are looking to build a new set of headphones.
Reactions: WNBC, capnjack, GoodGucciGoo and 3 others
Read more…