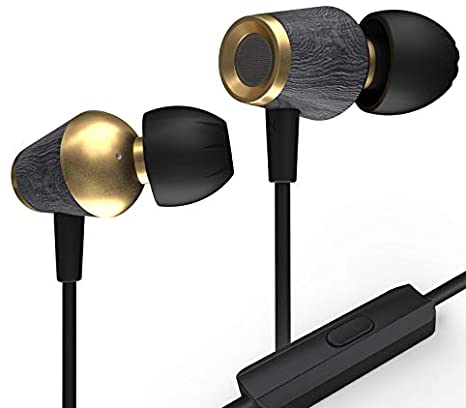 
CCA CST
The CCA CST is a new single dynamic IEM from the sister company of KZ. It features a 10mm driver with a double magnetic circuit. It has a fixed cable and is constructed from wood and metal, and is the first single dynamic model from CCA. The diaphragm material is not specified.

The CST comes packaged in a very small, flat, white rectangular box. There is a colour image of the IEMs on the front and brief specifications on the back. The IEMs are packed in a plastic tray with the documentation and two pairs of Starline tips (S, L). The medium size tips are pre-fitted on the earphones.

The earpieces have a body made of a light-coloured wood. There is a gold-coloured metal trim on each end and a large vented grille on the rear but there is no branding or channel identification. The angled nozzle emerges from a domed cap with a prominent lip to secure the tip and there is a small circular pinhole vent near the base. The IEMs are reminiscent of the VJJB K4S which are also made from wood and metal. They are light in weight and very comfortable. The cable is rubbery and is terminated in a 90° angled plastic 3.5mm plug. There is some cable noise.

Testing was performed using an Xduoo X20 DAP and a burn in period of 100 hours was carried out. The pre-fitted tips were used and although I did not obtain a perfect seal, after experimenting with various other tips the medium Starlines proved to be the best compromise.

First Impressions
The CST displayed a warm, well-balanced U-shaped profile which was very easy to listen to. The lower frequencies were elevated with strong sub-bass, a prominent mid-bass and some bleed into the mids. The mids themselves were a little recessed and warm in the lower region but possessed good timbre. The upper mids were brighter and more forward and this trend continued into the treble which was above the mids in level, but not above the bass and with only a slight trace of harshness. Detail retrieval was good but the transients were a little soft. The soundstage was one of the best features, being wide, deep and spacious with a good impression of height. This was probably due to the vented rear of the earpieces. Overall this relaxed and natural presentation was very impressive at the price.

Bass
The CST's bass was forward and powerful, warm in tonality and a little soft in attack with the emphasis in the mid bass and a good sense of weight. The sub-bass did roll off somewhat with the lowest frequencies lacking definition. The texture was good and there was a good reproduction of recorded ambience.

Jennifer Galatis's soundtrack "Io" features an arsenal of keyboards. "Interstellar Voyage" begins with an anthemic theme in synth strings supported by deep sub-bass tones. These displayed good texture on the CST but due to the limited extension, they lacked some impact. Where the mid-bass took centre stage, the effect was very satisfying.

Mark Dwane's series of albums on mystical themes performed on MIDI guitar are always very well recorded and produced. "Siren's Song" from "Archives 2" is based on a fast-moving sub-bass riff with wordless female vocals and electronic effects. The bass notes possessed good texture and reasonable impact but did merge together a little with some lack of definition due to the blunted transients. This is a severe test and to be honest, the CST did do fairly well considering the price.

Mids
The midrange was somewhat recessed, but still retained some presence. The lower mids were less prominent than the upper mids which were brighter.

Benny Andersson's solo album "Piano" features his own compositions. The beautiful "Jag Hor" received a measured performance from the CST. In the quiet passages it sounded great with good clarity and definition but in the more powerful sections the dynamic range was a little squashed and the atmosphere of the recording venue rather flat. Occasionally there was a strident tonality in the climaxes with a thin note quality.

Pachelbel's famous "Canon in D major" performed by the JF Paillard Orchestra also came over very clearly with the divided string sections well defined and the harpsichord continuo clearly audible. Once more, however, in the more lively passages the timbre of the strings became less natural with a slightly sharp edge and there was some clouding of detail.

Treble
The CST's treble was largely well defined, especially in less complex tracks and at low volume. In more energetic pieces the separation did suffer a little and the tonality became brighter and less defined. However, detail retrieval was very good in general.

"Pyramid" from "Behind the Gardens" by Andreas Vollenweider showcases his trademark electric harp and complex percussion arrangements. The high notes of the harp were clear and the complex percussion accompaniment bright and well textured. Towards the conclusion there are multiple cymbals playing and there was some splashiness and merging of detail in the loudest sections.

The BBC Philharmonic's version of Hubert Clifford's "Kentish Suite" is a fine Chandos recording. Part 5, "Greenwich" brings to bear the full orchestra in a dynamic performance with prominent strings, brass and percussion. There was plenty of verve and attack on the CST and the layout of the orchestra was nicely portrayed. The brass and percussion did tend to dominate, being just a little too bright and forward, affecting the balance and the violins displayed a slightly thin timbre in the loudest passages. The slow movement "Pastoral" on the other hand, was more to the CST's liking with the woodwind solo floating over the harp and string accompaniment in a most attractive way whilst displaying a more natural tonality.

Soundstage
The CST displayed a large, spacious stage with good imaging, layering and separation. The sense of space was well rendered enabling the ambience of a recording venue to be heard clearly. In dynamic and complex passages the staging became flatter and there was some merging of detail.

Vangelis's "Elsewhere" from his album "Direct" begins with an electronic percussion elementcircling from left to right which is joined by another from right to left which weave in and out in a figure of eight. This was very well reproduced by the CST. A solo voice high in the centre plays the main theme and the climax was very well handled with the full range of keyboards at Vangelis's disposal excitingly presented. The CST was very impressive in this piece.

Malcolm Arnold's wonderful "Cornish Dance No. 3", in a classic Lyrita recording with the LPO and the composer on the rostrum, produced an expansive staging on the CST with the bass drum foundation, brass fanfares and a bright incisive tambourine cameo all combining to produce a thrilling performance. The ambience of the concert hall was particularly well reproduced. There was just a hint of splashiness in the cymbal crashes in the climax.

Comparisons
I have chosen some dynamic drive IEMs with a fixed cable at a similar price to the CST for comparison.

KZ ED9
At a current price of around £14 the ED9 still holds its own in this sector with its two tuning options. With the gold nozzle it sounds similar to the CST with a powerful bass and a strong V signature but loses out in detail and refinement. The brass nozzle gives a more neutral and transparent sound with better detail and staging which is exceptional at the price. The vented rear endows the stage with a spacious quality.

Cambridge SE1
The SE1 started out with a list price of around £70 but appeared on Amazon recently at a bargain price of £20. It is a bullet-shaped IEM with an 8mm dynamic driver featuring a beryllium plated diaphragm. The earpieces are crafted from aluminium and there is a fixed cable. It has a powerful and punchy bass, smooth well-resolved mids and a clean treble. It improves on the CST with superior transients and better separation. The overall profile is U shaped but mids are more prominent than the CST. Treble is smoother and more refined but with no loss of detail.

Lindy Cromo IEM-75
Another Amazon bargain, this too had an original price of £70 but was reduced to £12.99. It is a dual-drive IEM with a 15mm bass unit and 7mm tweeter, a metal body and again, a fixed cable. Bass from the large driver goes very deep and is effortless. Mids are somewhat less forward than the CST and the treble rolls off earlier so the overall sound is fairly dark producing an L-shape profile, but it is very smooth and engaging. It does lose a little in detail to the CST but does not suffer from compression or splashiness.

Conclusion
On the front of the box the description includes the words "natural sound" and I would not disagree with this. In general the CST presented music in an entertaining, unforced and attractive fashion with the only negatives being a somewhat thin tonality in the treble and a lack of definition in complex or dynamic pieces at loud volumes. It is well made, looks good and has a well balanced sound quality. If you don't mind a fixed cable and you have a limited budget, it may well be suitable. 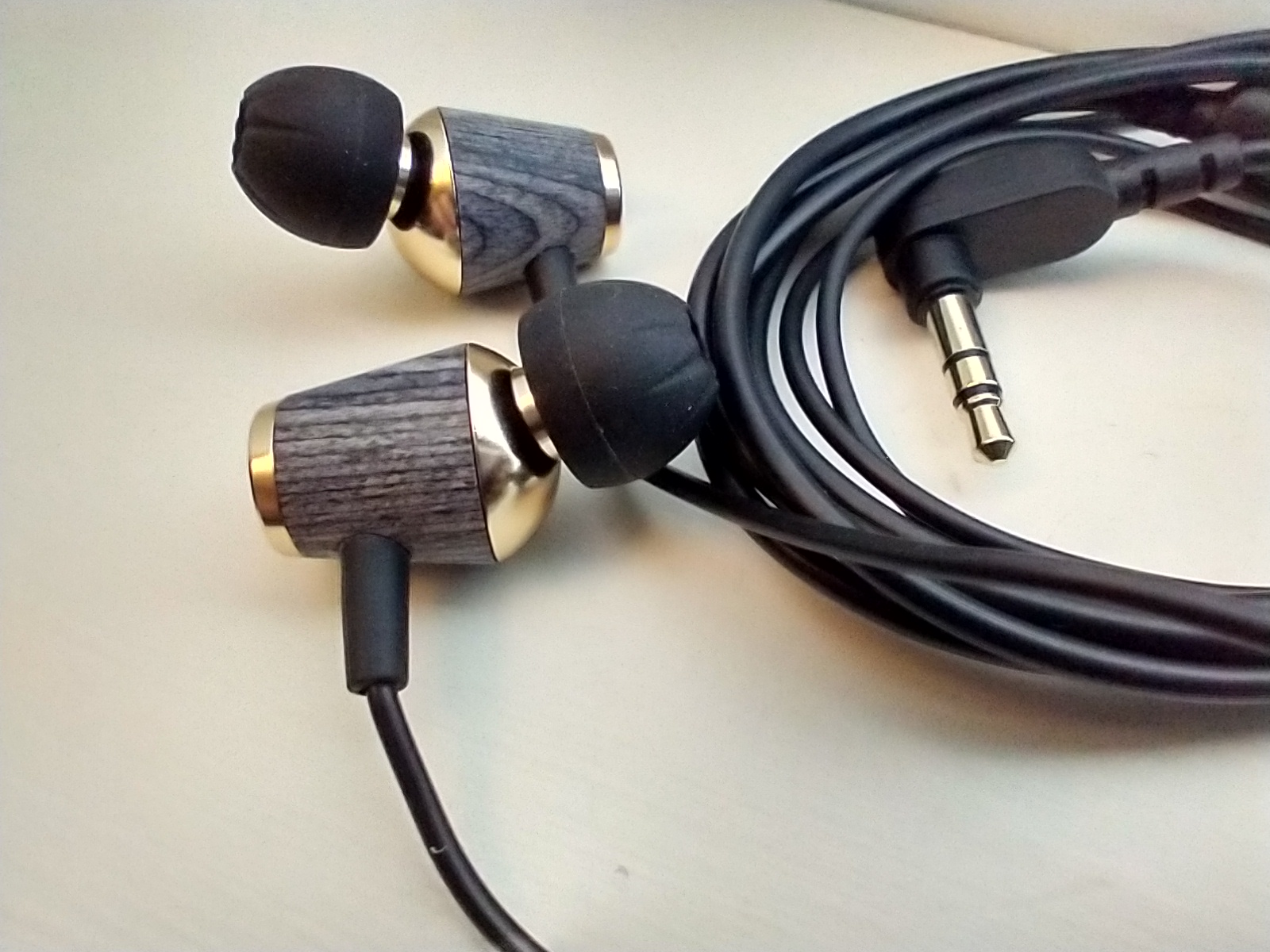 The box is small really small with nothing for accessories but some starline tips but its perfectly fine as you don't need much with these. construction is very good the cable itself is thick enough without being too ridged or too limp. the wood housing and metal accent caps give this a look of a much more expensive earbud.

Bass: Bass has both quality and a decent amount of quantity its not prefect but for this price its down right good.

Mids: Are Full with a forwardness and details I was not expecting the bass adds some warmth to them but not to the point of recession. The can get a little shouty and metallic under high volumes but mostly this is not the case under normal listening.
Treble: Is very pleasant, yes there is some good sparkle but its never harsh in my opinion nor is it too laid back, honest its just right.
Soundstage and imaging:
Was surprising I was expecting closed and narrow but got a decent width and depth, its far from an ultra expansive stage but wide enough to give you a directional sense. Details are decent but for its price that's just fine.

Conclusion:
The CST is better than it should be for the price and offers a good looking fixed cable IEM with a very pleasant relaxed smooth sounding Vshaped signature many will just love, a tip change can make these even better and as is they're worth the price for sure.
Reactions: lowfrequenciesmatt and G777
Read more…