Menu
Log in
Register
CCA A10 - Reviews
Overview Reviews (2) Gallery
Pros: Great details, sound stage and an excellent overall sound signature. Solid construction.
Cons: A larger IEM that might be too big for some people.
Stereotypical stock accessories.
The A10 uses 5 balanced armatures for a distinct very clear sound from the mids to the bass although the highs do extend a bit too much for my ears with certain types of music, nothing that an EQ can't take care of.
The construction and size is very similar to it's Tripowin and KZ siblings but in my opinion this is a much funner sounding IEM with more soundstage and resolution.
Definitely not a Basshead approved sound but it does have a surprisingly good amount of bass details similar to perhaps that AKG sound signature.

The vocals are perfectly centered and slightly forward but very pleasurable.

The highs do have some sparkle on some tracks but I don't find them overly harsh compared to other all BA earphones.

CCA has definitely done a excellent job with tuning with this one and it is a quite pleasurable sound if not leaning toward a more analytical listening than fun listening yet still it is a fun earphone to use. 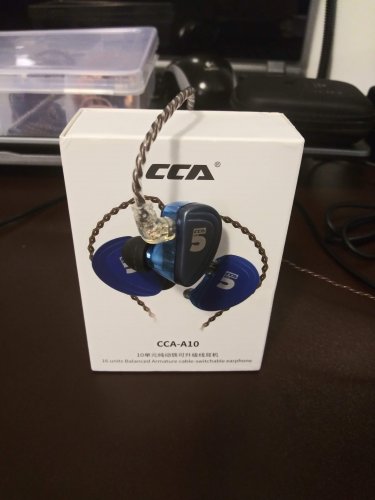 Pros: Resolution
Clarity
Detail
Separation and layering
Cons: Usual tangly cable
Not for bassheads
Treble may be too lively for some
The CCA A10 is the fifth and latest IEM from Clear Concept Audio, a sister company of KZ (Knowledge Zenith). It features five balanced armatures per channel. One 22955 BA covers the bass region, two 29689 BAs are employed for the midrange and two of the familiar 30095 units cover the treble.

The packaging and accessories are similar to that supplied with the C10 and C16 and include the cable, a set of three Starline-type tips and documentation, all presented in a neat small white box with an illustration of the IEMs on the front and the words “10 balanced armature” printed below. There are some specifications printed on the back.

The A10 has a smooth zinc alloy faceplate finished in an anodised blue colour with a peacock-like sheen. There is a large white number 5 on each earpiece with the channel indication on the side of the transparent resin inner part of the body, through which the components can be seen. The earpieces are very similar to those of the C16.

The detachable cable is the “Type C” design, following that used on the previous model CA4 and KZ ZSN. It has a clear plastic female connector with the pins being situated on the body of the IEMs. The cable itself is similar to that used on the C10 and C16. It has a very long section between the Y-split and the earpieces and as a result is somewhat prone to tangling. The plug is a right-angled plastic 3.5mm type.

The earphones were left burning in for over 72 hours before testing and included tracks of white and pink noise, glide tones and other audio conditioning tracks. After this I used a Hifi Walker H2 DAP and a Sony NWZ-A15 for evaluation. The output was very robust and I therefore did not use a headphone amplifier.

The A10 was tested using the supplied cable and the pre-fitted medium Starline tips, which resulted in a very comfortable fit. I found it essential to insert the tips snugly into the ear as deeply as possible to ensure a correct sound balance. Used this way, the fit, seal and isolation were above average.

Initially, the sound was very bright and somewhat unbalanced. However, after 72 hours burn in the sound was transformed. As with the CA4, the burn-in process altered the sound of the A10s significantly. It seems these CCA IEMs need a long burn-in time to give of their best. After a further extended run-in period the overall balance was much more even, with a clear and detailed treble with good extension. In fact the detail retrieval was superior even to the C16. This resolution made it easy to hear the differences between the two DAPs I was using, showing the Sony to be warmer in tone with slightly softer transients but a deeper bass. Midrange was very open and neutral with no bass bleed and excellent clarity. The bass was also impressive displaying good depth and extension with some sub-bass rumble and physicality, qualities normally associated with dynamic drivers. In more detail:

I was very impressed by the bass performance. Despite only employing one 22955 driver the bass was deeper and more satisfying than that on the C16 which uses two of these. It was accurate and well-defined and the speed was notable, with no overhang even on complex tracks. Bass reached deep, as evidenced on “Reverie”, an electronic version of a Debussy piece by David Wahler. The rich bass accompaniment formed a perfect foundation for the delicate melodic line and had very good texture. Classical music was also enhanced by this excellent resolution. “The Swan of Tuonela” by Sibelius, performed by the Lahti Symphnony Orchestra conducted by Osmo Vanska, was a perfect example, with the bass drums at the beginning of the piece providing a satisfying rumble and a sense of foreboding. Basses and cellos displayed excellent texture with bowing very well portrayed. David Essex’s “Rock On” has a superb production by Jeff Wayne. The double tracked bass guitars sounded great, going deep with a lovely texture, forming a perfect backdrop for the vocals which were clear and well articulated.

The midrange was clear, clean and totally free of bass bleed, creating an open and refreshing effect. As a result, layering and separation were first-class. Electronic music benefited greatly from this. Ed van Fleet’s “Starry Night” from his album “Horizons” showed the A10’s capability at its best, with all the different synthesiser voices being very well-defined, and combining beautifully to create a superb atmosphere. Jacques Ibert’s “Esacles” is a wonderfully varied suite of orchestral pieces for large orchestra. In the third movement, “Anime”, performed by the Minnesota Orchestra under Eiji Oue, the orchestral colour and verve were reproduced to thrilling effect with a wonderful sense of immediacy. Brass shimmered, percussion had great impact and power resulting in a superbly entertaining experience. Linda Ronstadt’s vocals on “Talk to me of Mendocino” displayed great dynamic range, with the climaxes full of power and the softer sections conveying all the emotion of the beautiful Kate and Anna McGarrigle song. The cello solo in the bridge was beautifully reproduced.

The treble was clear, crisp and well-articulated, with superb detail and extension. In fact the resolution was so good, I was hearing things I had never heard before. Some years ago I compiled a tape of some favourite tracks from vinyl. No longer having the records, I converted the tape to MP3. With the A10s, I was able to hear the crackles and pops on the original recording which I had not been able to do before! As with the C16, the A10 was not forgiving of poor recordings and took a “warts and all” approach. The extreme clarity reminded me of a live feed from a studio mixing desk.

Vangelis’s “Albedo 0.04” from his “Rosetta” album has many complex percussive elements full of detail and interest, with metallic sounds particularly well-defined. In addition, the transient attack and speed on offer here really added excitement and spice to the sound. The jangly and aggressive guitars in Grace Jones’s “Walking in the Rain” had real edge and attack. Ms Jones’s voice came over with an appropriate menacing tone and the whole production was full of life and energy. The delicate percussion parts in Stuart Mitchell’s “Mausoleum at Halicarnassus” were superbly reproduced with a lovely natural timbre and decay. The triangle came over clearly and when accompanied by the harp, the separate sounds were easy to discern.

The A10’s soundstage was wide and deep and also displayed a good impression of height. The stereo imaging and separation well above average, being especially impressive in classical music. “Farrago” is a varied suite of orchestral pieces by E.J. Moeran. In the version by the Ulster Orchestra conducted by Vernon Handley, the positioning of instruments within the soundstage was excellent, with the different sections of the orchestra all in their proper locations, both laterally and with regard to depth of image. Dave Brubeck’s “Unsquare Dance” sounded superb. The hand claps were crisp and well-defined and the drumstick parts were brimming with detail. Stereo imagery was excellent on this track with the trio laid out very naturally, with the clean, clear separation adding to the realism. “Another Land” by Davol from his “Paradox” album displayed a cavernous acoustic with deep bass synths echoing impressively and tinkly percussive parts clear and crisply defined. String patches showed multi-layered qualities with lots of “air” resulting in a very atmospheric performance. “I am a Camera” by the Buggles is a wonderful Trevor Horn production with a huge three-dimensional soundstage. Depth on this track was particularly well presented and the powerful instrumental conclusion was very effective. Vocals were exceptionally clear with a great sense of distance.

After the CA4’s V-shaped sound departed from the profile displayed by the earlier two models, C10 and C16, the A10 returns to that more neutral, well-balanced presentation. It has superb levels of resolution and detail. Out of the box, it sounded very bright and somewhat unbalanced but after an extended run-in a beautifully natural, well-judged profile resulted. The overall sound resembles that of the C16 but improves on it with a deeper bass and even more detail and a well-extended treble. Separation and layering are first-class and soundstage is excellent. It is a great achievement compared to the C16, considering that three fewer BAs are used per channel. Overall, I feel this is the best model so far from CCA and it deserves an unreserved recommendation.


Note: I would like to thank Sunny from Better Audio US at Amazon.com for providing this review sample at no cost to me. 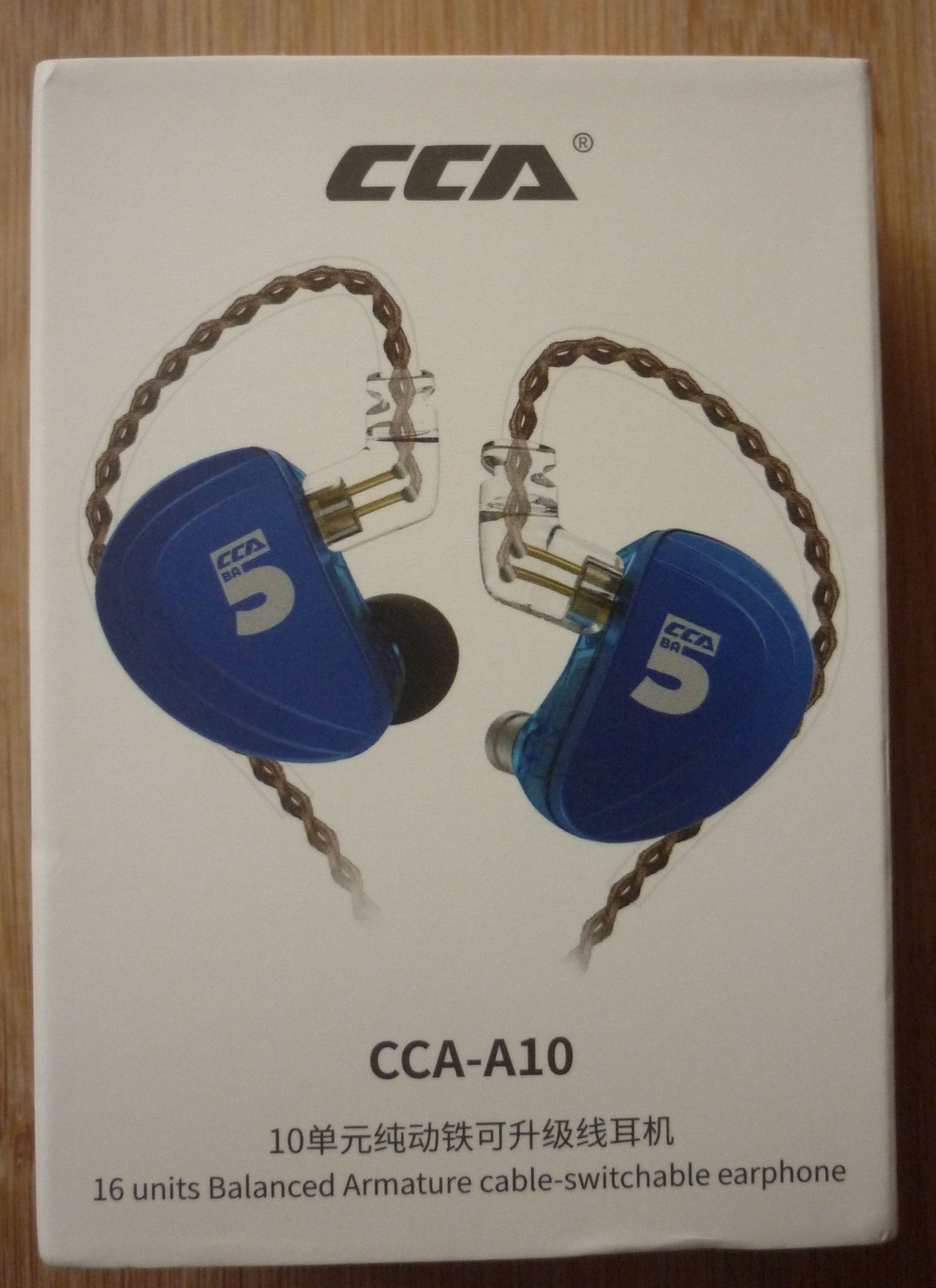 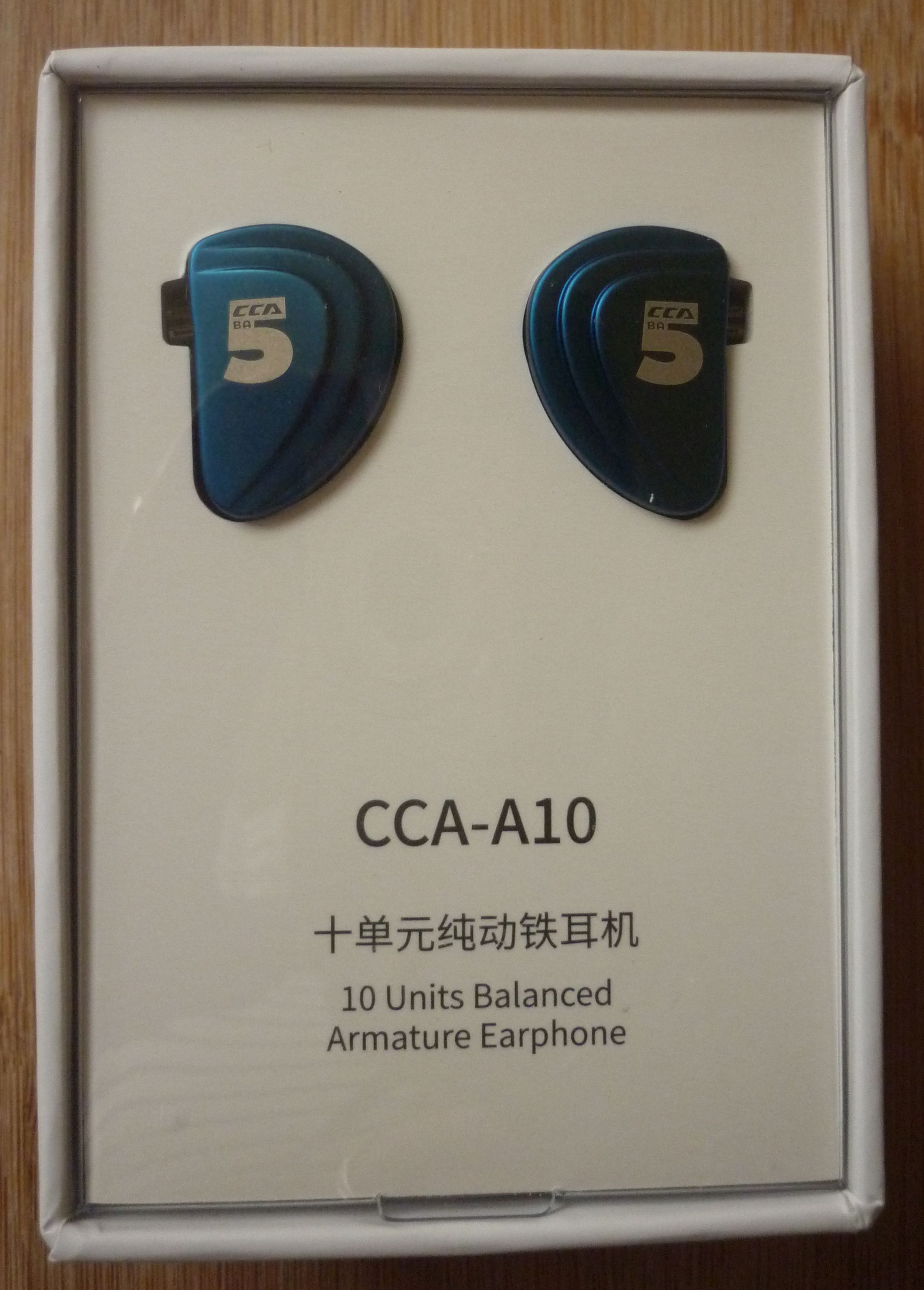 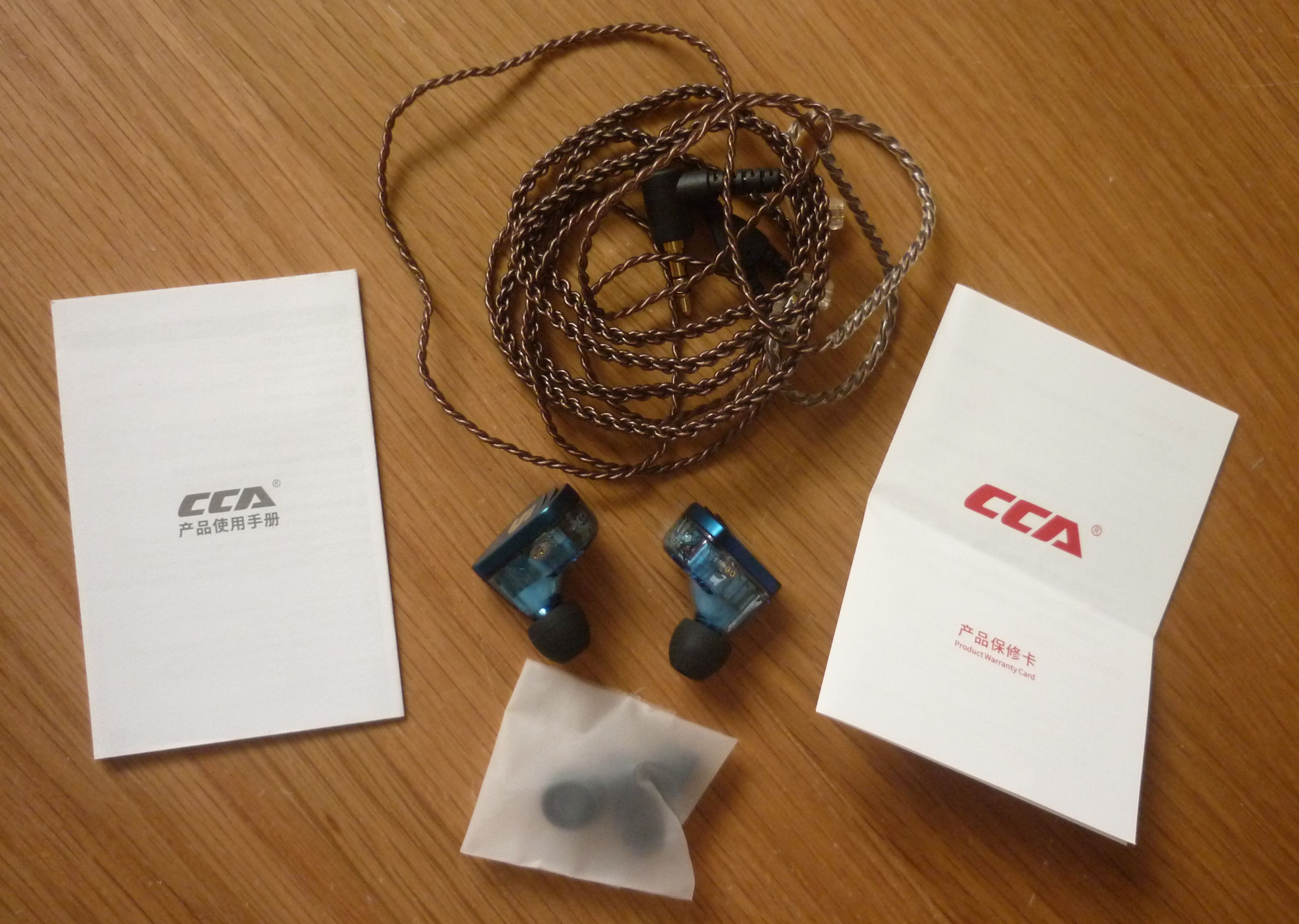 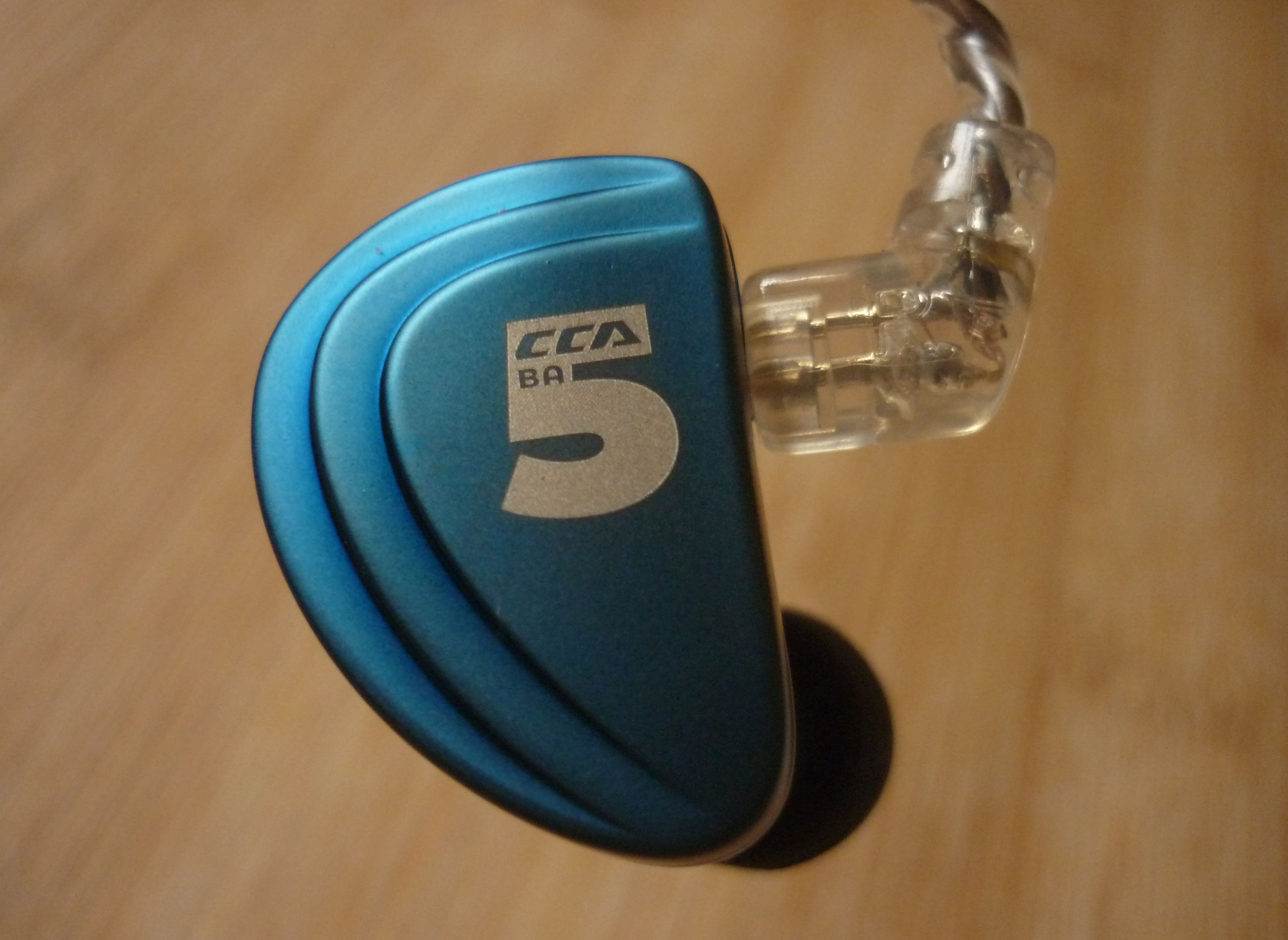 RikudouGoku
Ok thanks will save my money then.

SweetEars
i am fan of the revonext Qt2 signature. How does this compare to QT2 in terms of differences

Nimweth
Sweet Ears, I will need to fish out my QT2 and do a comparison. As I recall the QT2 has a powerful bass, recessed mids and bright treble, a classic V shaped profile. I will get back to you!