The inception of our latest product originated as a result of our partnership with a leading microchip foundry. Together we have created an integrated version of our V5 FET circuitry. In order to overcome many of the inherent limitations associated with ICs, we have externalized parts of its circuitry and completed those sections with high quality discrete components.

Organic and Exuberant
Pros: - Natural, energetic, light and juicy upper midrange without sounding shouty or overdone
- Lifelike timbre
- Midrange is neither too forward or recessed
- Great balance between female and male vocals
- Treble and upper treble becomes more sweet and sparkly
- While narrower, the soundstage is mostly preserved despite the upper midrange boost
- Controlled and textured midbass and subbass response
- Good build quality
Cons: - Not enough kick in the lower regions
- For those seeking huge soundstage, these aren't for you
- Won't pair well with shouty or too bright IEMs and headphones
Disclaimer: Burson sent me this product for free in exchange for a full and honest review.


* I'm using the Burson V5i op-amp together with the xDuoo XD-05 BAL dac/amp.

8820's bass is less defined and a tad more present and soft, which ultimately sounds muddy to my ears.
Midrange and upper midrange are a bit dry and are not lifelike as the V5i.
Treble and upper treble extends more on the 8820, but are not as sparkly and detailed like the V5i.
Soundstage is a bit wider on the 8820, as a result of its more neutral midrange.
In contrast, female and male vocals are clearly better on the V5i, due to the more cohesive and intimate midrange and upper midrange.

V5i is the winner here.

1612 will sound warmer, thicker, mellower and darker with most headphones and IEMs. While it still has some treble sparkle, It isn't enough to save its sound of complete mudyness and lack of detail.
The soundstage is the only good part, it's the wider due to the bass boost and upper midrange scoop. However, 1612 has a good synergy with shouty or sharp IEMs and headphones, for obvious reasons. For example, using with my TRI Starlight, which is a super bright sharp V-shaped IEM, the timbre gets more tamed and smooth.
However, pairing with the Kinera Nanna, it becomes a complete mess, because the sound of this IEM is already thick, mellow and average on details. At the end, It's all a matter of synergy. But still, there are better options than the OPA1612 on the market today. You can find better amps and op-amp which are warmer without being dark and muddy.

V5i is the clear winner here.

Dead flat, lifeless and distant sounding. Average to low detail. Worst op amp I ever tried. V5i beats it in every single aspect.

I know it's a different kind of comparison, but I find it interesting to make one, due to its huge popularity and efficiency.
BTR5 is more neutral and brighter and its midrange isn't as pronounced and organic as the V5i. Treble and bass extends more on the BTR5 and the same goes to soundstage's width and depth. It's difficult to define a winner here. Again, It's all a matter of synergy: I would choose the V5i when using with a more V-shaped and harder to drive IEM or headphone, because it will give me the fluidity that is missing in the midrange, but I would stick with the FiiO when using a more balanced earphone that doesn't require much power and correction to its sound.

Burson V5i gives you a significant upgrade from the stock OPA1612, also beating most op-amps from its price bracket. It can be a bit expensive for some people, but it will definitively sastisfy those seeking for a more organic and mid-centric sound.
Last edited: Apr 14, 2022
Reactions: Light - Man
Burson V5i D - OPAMP for warm, lush, thick signature lovers
Pros: Warm, lush, airy and holographic stage
bit more gain compared to the stock OPA1612,
warm, fat yet very controlled bass
Cons: May not pair well with all headphones/earphones
Intimate and thick presentation may not suit everyone's taste
Stage width is reduced compared to stock OPA1612
First of all a big thanks to John from Burson Audio for contacting me and sending V5i for free in exchange for my honest opinion.

I am not a reviewer and this my first review, so please bear me with this review.

The installation is very easy and simple. 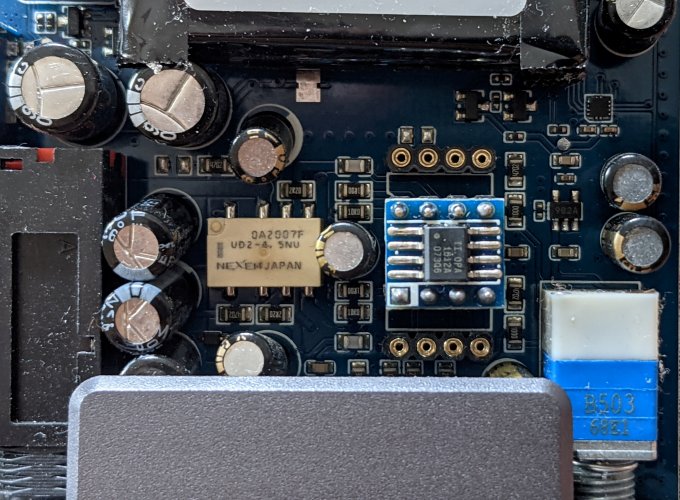 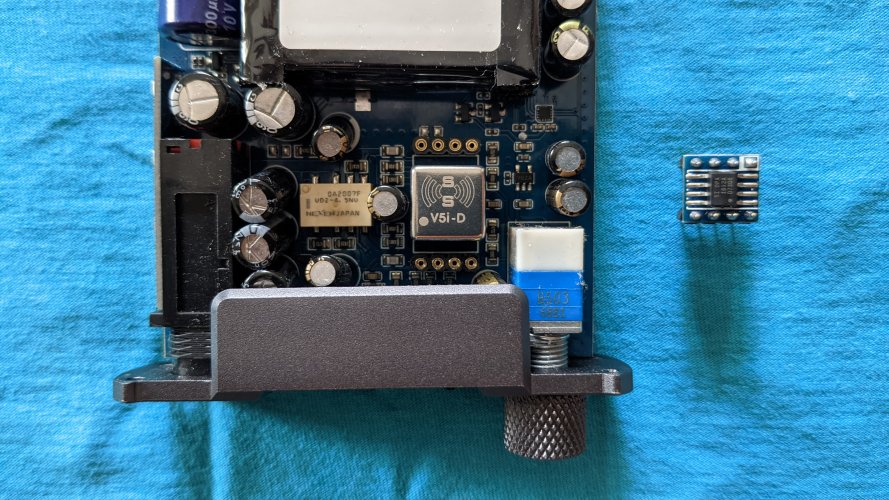 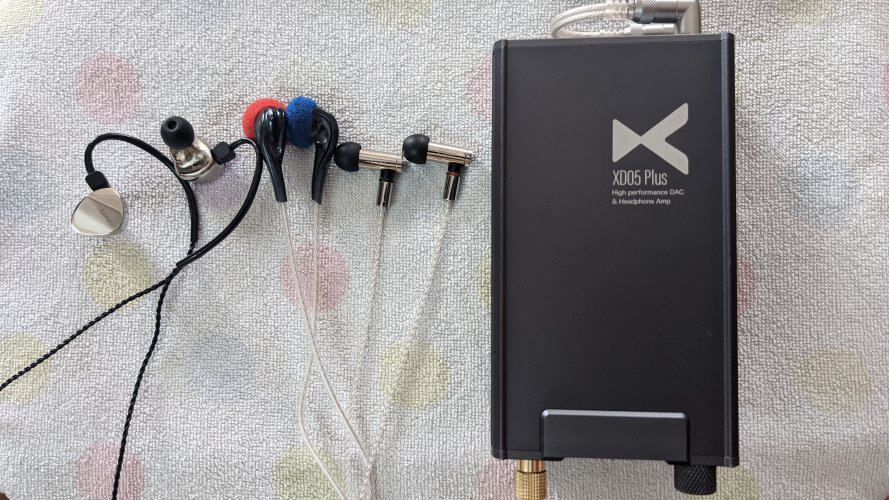 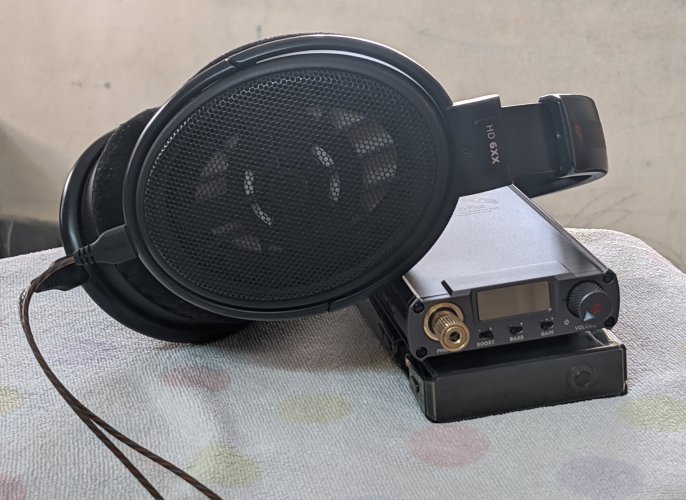 I was not able to find much differences vs the stock OPA1612 initially but as I spent more time with it the differences became more apparent.

The first and easy difference I was able to find is V5i has a touch more volume at all gains which is definitely a big advantage IMO.

I love warm, thick and lush sound so please take my impressions with a grain of salt.

I loved V5i pairing with all my headphones except EM5 which already has in your face kind of presentation and V5i made it worse for me. I did not like the pairing at all, I liked EM5 more with the stock OPA1612.

Lows:
With V5i the bass is fatter but surprisingly more controlled when compared to the stock opamp. With the stock one the bass is a touch tighter but it has less control with bassy songs.

Mids:
Mids is where V5i has it's charm they are more intimate, lush, thicker and liquid. Notes have the weight to them which I like.

Highs:
The highs have a little more sparkle and airy, with the stock opamp the highs can be harsh on some recordings. With v5i you can push the volume to higher levels without getting that harshness or sibilance.

Soundstage:
This is where things get little interesting. The stage definitely less wider compared to the stock one but the depth increased a little. With HD6XX the stage is less wider but at the same time it's more airy and holographic. It's more of a preference thing than which is better IMO.

If you prefer warm, thicker, airy and holographic presentation, it's a must try.
Reactions: Light - Man
Burson v5i op-amp
Pros: -Soundstage width increase
-Organic life like sound
-Music has meat to the bones
-Lovely mids with a fuller tone
-Lows goes a bit deeper
Cons: None that I can think of
Introduction

I was contacted by Burson Audio to conduct a review on the V5i a few months ago. The v5i op-amp took a long time to arrive from Hong Kong. I was provided with one Op amp to test them in my Topping D10 dac.

I bought the Topping D10 as a 2nd hand unit for AUD$100, to use as a spare. My main dac(s) are Yggdrasil and Bifrost 2. So why did I buy the cheap Topping D10? One, I could use it as a spare and it's cheap. Can just keep it in the drawer and forget about it. I have always view the D10 as clear but digital sounding - which is another way of saying I don't like it.

I like a dac that is neutral sounding and also have a soul to the tone and the Topping D10 in it's original form isn't it.

The V5i Op Amp
I did not know about this op-amp before it arrives. I did not read up much about it because I want to experience it without being tainted by others impressions.

This is the tiny bugger. 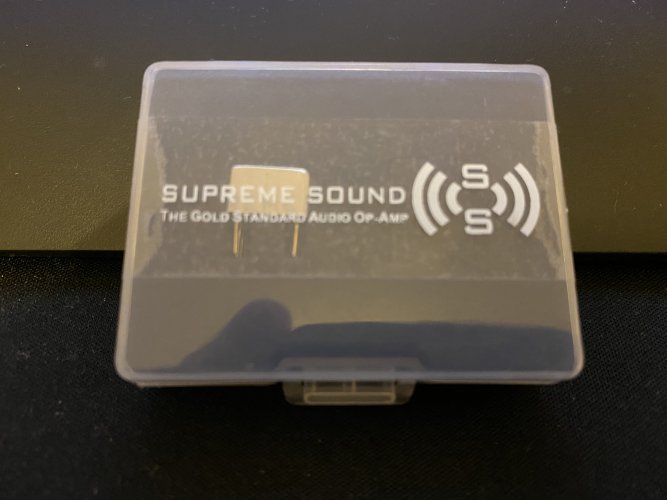 Installing it into the Topping D10 dac is straight forward. Open up the D10 and see the picture below on how to install it.

In the first picture is the dac in it's original form. The black chip 'circled' is the original. In the 2nd picture, you can see the Burson v5i op-amp installed 'circled - and it must be installed with the words facing left like you see it in the picture. This is important as installing it the wrong way will result in no sound and may damage both the op-amp and dac. 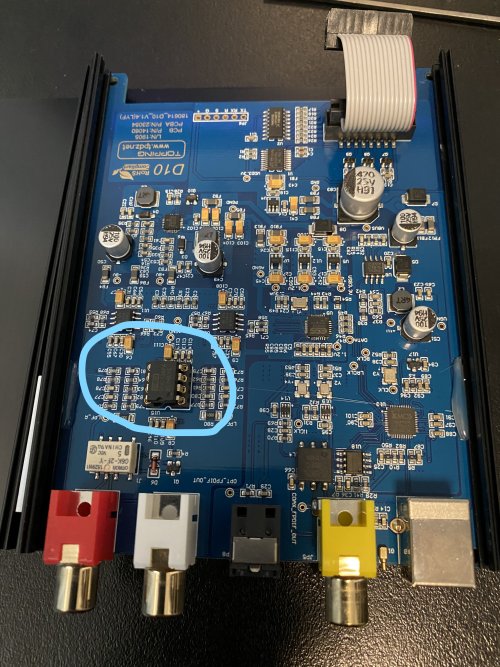 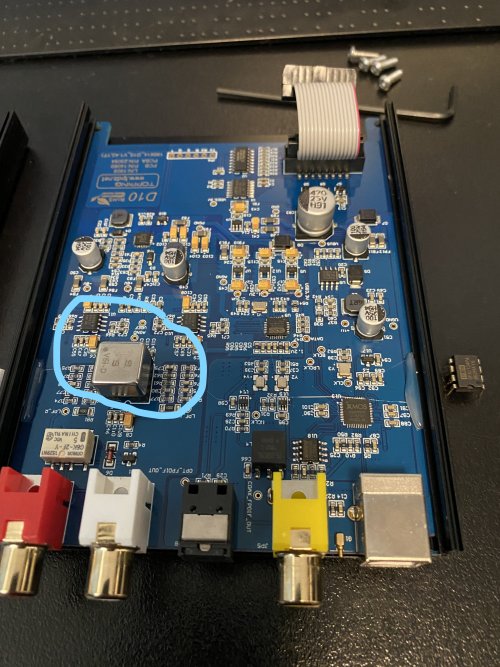 Mids
This where it stands out for me. Mid range and vocals are very engaging now and sound organic and natural. Love it !

Highs
Sound a bit rounded off but still very detailed. This makes for a non fatiguing listen especially for longer sessions.


Performance Closing thoughts:
I am used to Yggdrasil for 4 years and I won't lie when I say that the Topping D10 is so far from Yggdrasil's performance scale that it's not worth comparing.

However taken on it's own - Topping D10 with Burson v5i op-amp installed show a marked improvement that makes this cheap dac worthy as a spare dac in case I need one. In the company of my gear, it was still enjoyable and engaging enough. Recommended.


Value
Not knowing how much this v5i opamp cost, I can't comment on the value to performance ratio.
Reactions: Light - Man
Read more…