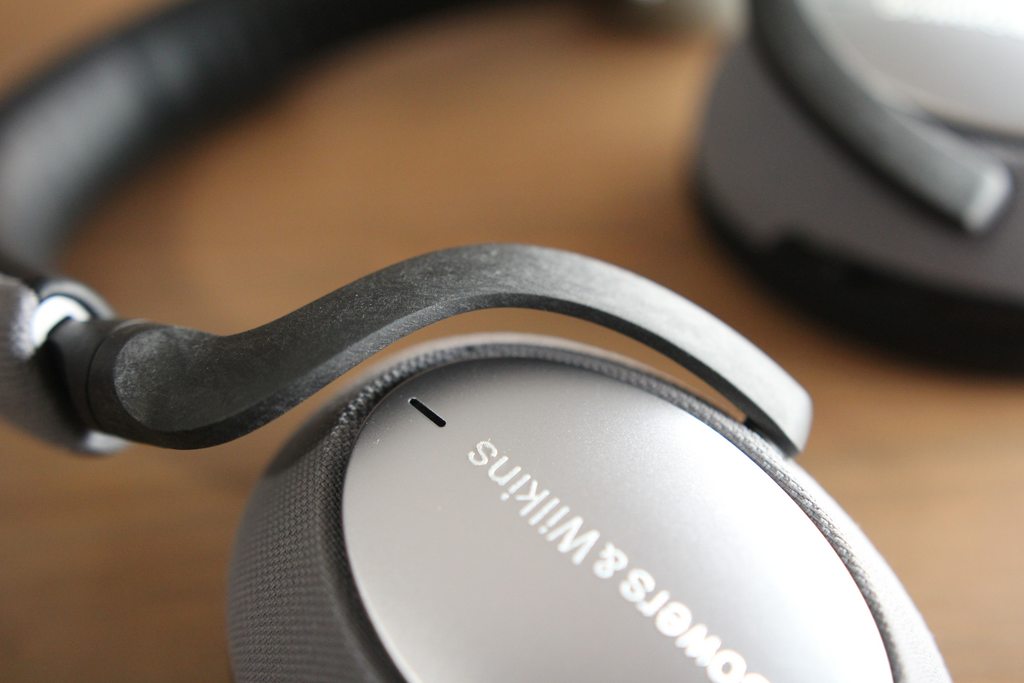 Bowers & Wilkins already proved their knack for product design several times over and the PX7 is not an exception. The earcups and headband are covered in stainproof cloth, the skeleton is made of carbon fibre and although the pads are made of leatherette this time, the whole thing feels sturdy and of high quality. Unfortunately, the headphone is on the clunkier side of things this time, but due to its good design, it doesn't look ridiculous on one's head. In short, it's a gorgeous headphone, which is exactly what we expected from this manufacturer. A special mentioning of the supplied transport case had to be made, by the way. Just like the headphone, it's sturdy, good-looking and has the perfect shape to be stuffed in a bag or backpack. Nice! 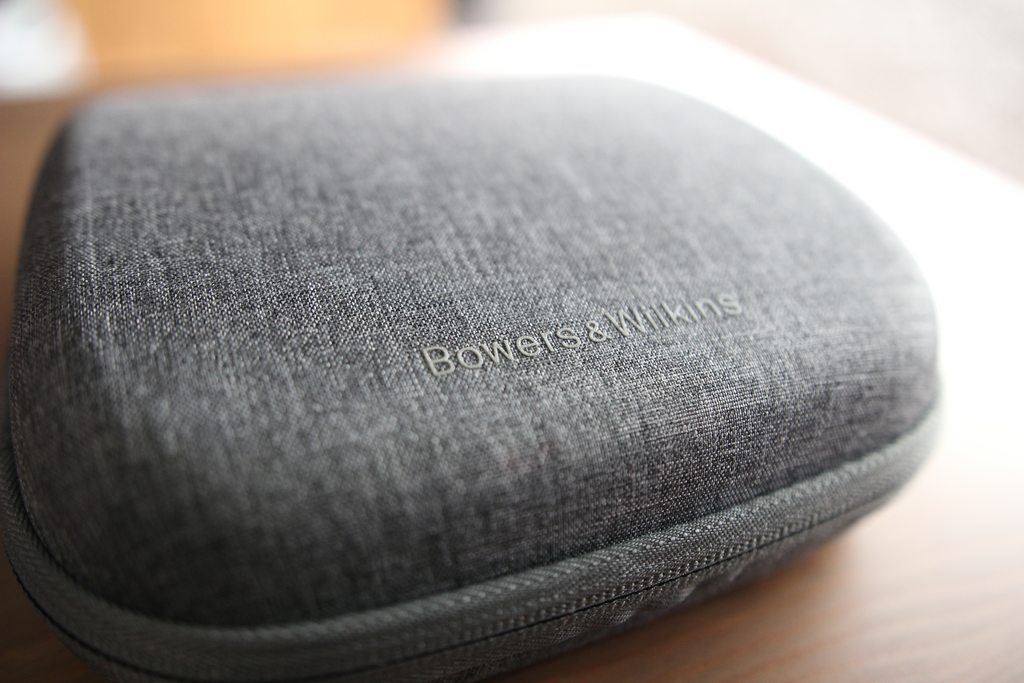 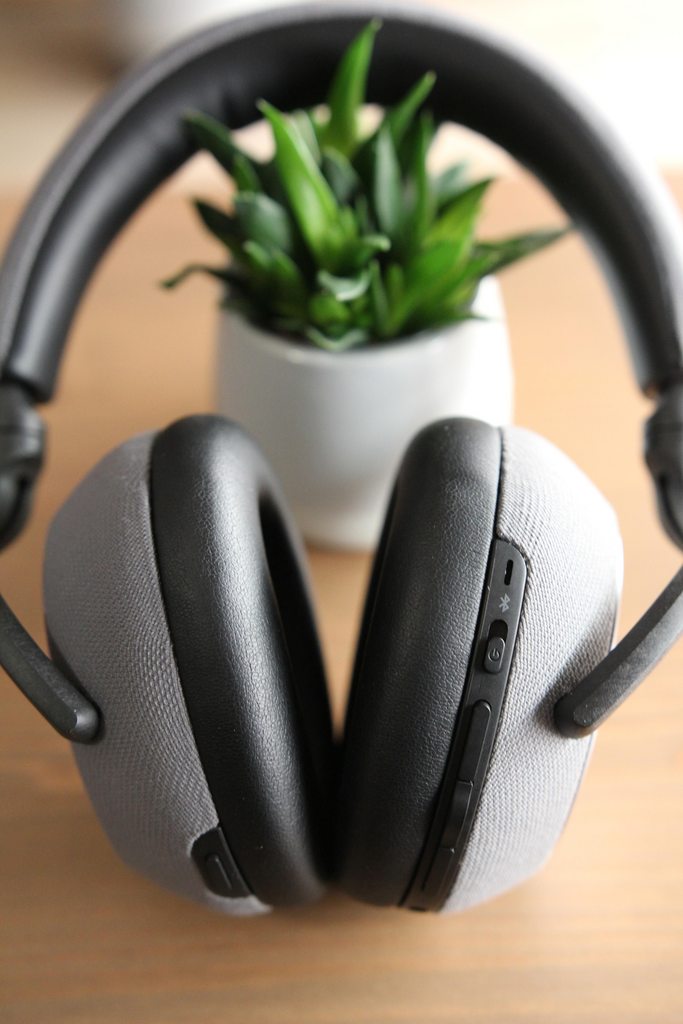 B&W left the predecessor's control schemes untouched, honing the principle of "don't fix what's not broken". Volume and playback controls are handled by the same three buttons, a separate button handles ANC. And finally, you don't need the app anymore to switch between modes. Each press of the button jumps to the next ANC mode and a friendly voice will tell you, into which mode you just switched. Of course, seasoned users can replace the voice with a short tone signal via app. The aforementioned app is kept clean and simple, yet offers all the options you need. You can rename your headphone, manage paired devices (other manufacturers should take note!), switch between ANC modes and adjust a couple of other preferences. According to the manufacturer's philosophy, there is no equaliser function, which might be a bummer for some. One brand-new feature is "sound landscapes", which lets you play certain nature-sounds, for example a campfire in the woods or rain against a window. That might be not everyone's cup of tea, but if you're not in the mood for music and just want to isolate yourself from cabin noise or traffic.. Hell, why not? I actually can see myself using that feature while reading in the plane, actually. 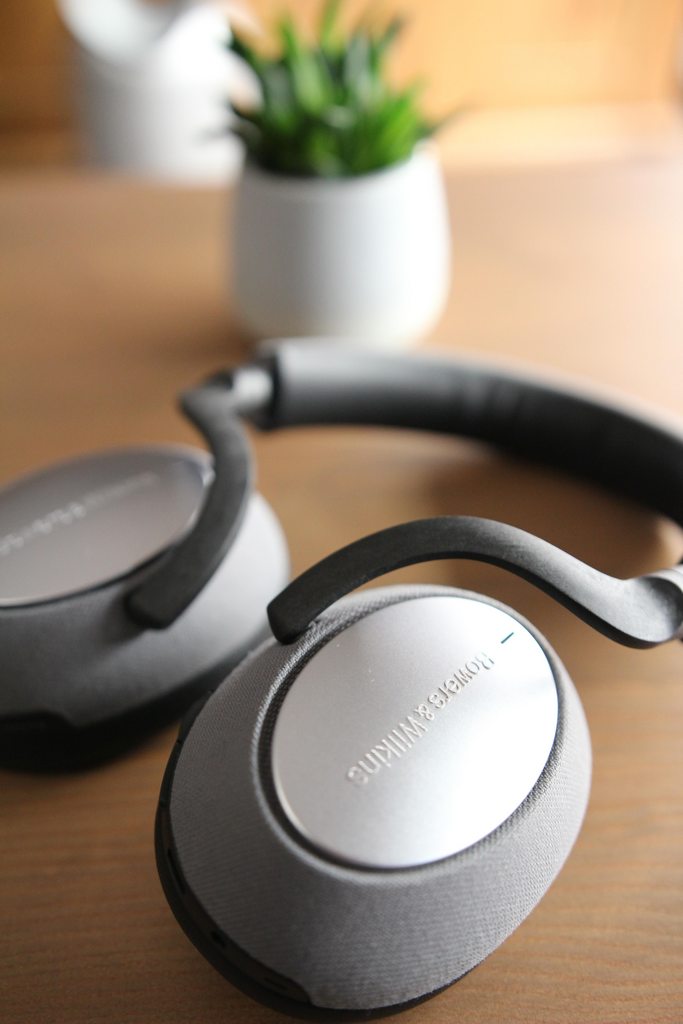 One huge update over the original PX is the comfort. The PX was uncomfortable as frack and inflicted pain upon most users after one hour of wearing. People with glasses additionally had to suffer from a catastrophic loss of bass, because it was impossible to get a proper seal with those stiff earpads. Fortunately, all these flaws have been eradicated. The PX7 wears as comfortably as the competition now and I could find no flaws with its fit. Still, the headphone clamps firmly to your head, so short sprints to the station or ecstatic dancing in public are no problem with these.
Due to its solid construction, the PX7 isolates well, even with ANC disabled (Sony, take note again!). The original PX still isolated a bit better, due to its heavier weight. 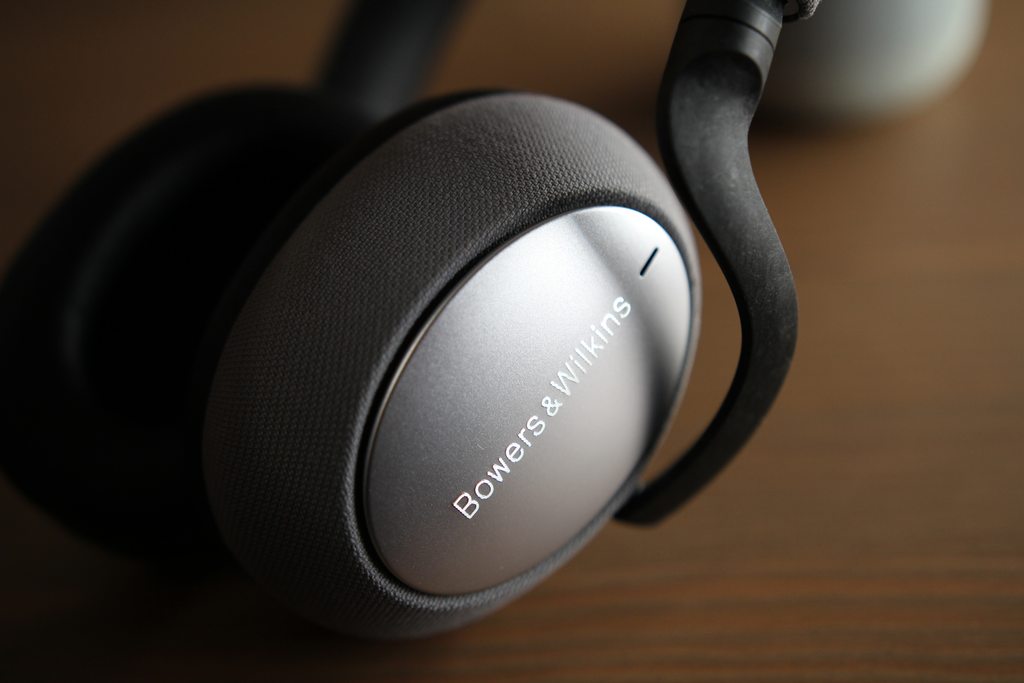 The sound of the original PX was pretty much an exception in B&W's line-up and the PX7 once again has been tuned according to the brand's house signature: Strong bass-foundation, relaxed mids, accentuated details. Those who didn't like the predecessor's rather neutral and mid-centric tuning or had issues with non-existent bass due to a broken seal: Rejoice! The low-frequency department has called Sony and ordered its crown back. Bass quantity is quite comparable with the XM3 (which means there's a lot of bass), but much more controlled, well-structured and quite fast. The mid-frequencies sound rather relaxed, but not as laid-back as in most v-shape-tuned headphones. I'd almost call the PX7's frequency response "w-shaped", because there seems to be an enhancement in the presence area going on, which gives voices and stringed instruments some good presence in the mix. In general, the PX7's mids sound very good to me. Whereas Bose's mids sound a little thin/ artificial and Sony's are just dead and lifeless, B&W managed to retain emotion and body in guitar solos, strings and voices. Not to everyone's taste is the treble region. If put the PX7 on your head directly after listening to a reference-tuned headphone, it sounds quite muffled and dull (imagine coming from a noisy street into a well-dampened room). That's because the lower treble region is really laid-back. Technically, the PX7 is a very detailed headphone, but due to its tuning, that's not really apparent. I'm immediately reminded of the Audioquest Nighthawk, which is a very controversial headphone because of similar tuning choices. Anyway, back to the PX7: After the lower treble dip, we can hear an enhancement/peak around 10khz, which gives cymbals and hi-hats an extra portion of shimmer and brilliance. As a result, treble sometimes sounds a little artificial and metallic, but at least for my ears it's not fatiguing by any means. And that's a keyword to describe the PX7's overall sound signature: Fatigue-free listening. This headphone is by no means tuned for critical listening at home, but for enjoying music while travelling the world or enduring the daily commute. It's the kind of sound signature that lets you lean back and relax, giving you almost something like a float-tank experience, especially together with the ANC-function. And when speaking of floating: The soundstage is stupendously huge. There is not much depth or ultra-precise imaging going on, but the stage is really wide and roomy, making even some open-back headphones sound claustrophobic in comparison. I don't know how B&W achieved that effect, but it's definitely impressive. 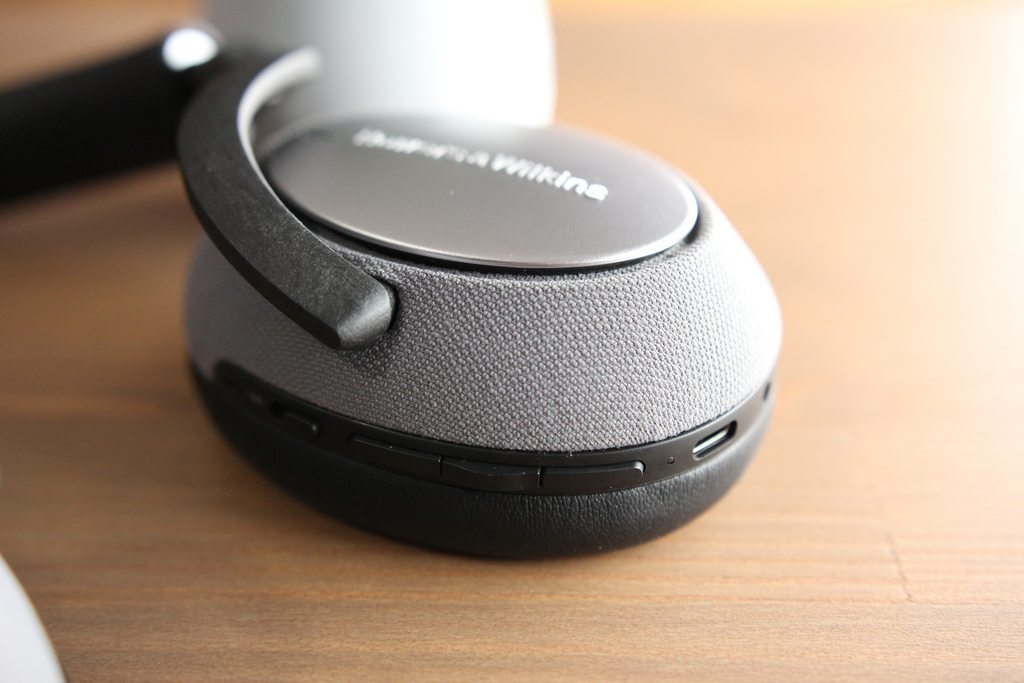 The PX7 supports AAC, aptX HD and aptX Adaptive 24 Bit. With these codecs you can enjoy your music in very high resolution, which should be standard for headphone in this price class (but unfortunately it isn't). AptX Adaptive is particularly interesting, because that codec allows for the optimal balance between bit rate and latency, depending on the source file's bit rate. Unfortunately, there a currently no playback devices on the market that support this new codec, but at least the PX7 is equipped for the future. Just like the predecessor, the PX7 can also be connected via 3,5 mm jack and USB-C. In order to use the 3,5 mm connection, the headphone has to be switched on, which is a bummer. At least B&W improved the internal electronics in this generation, so you won't have any issues with hissing or interference when using a wired connection. 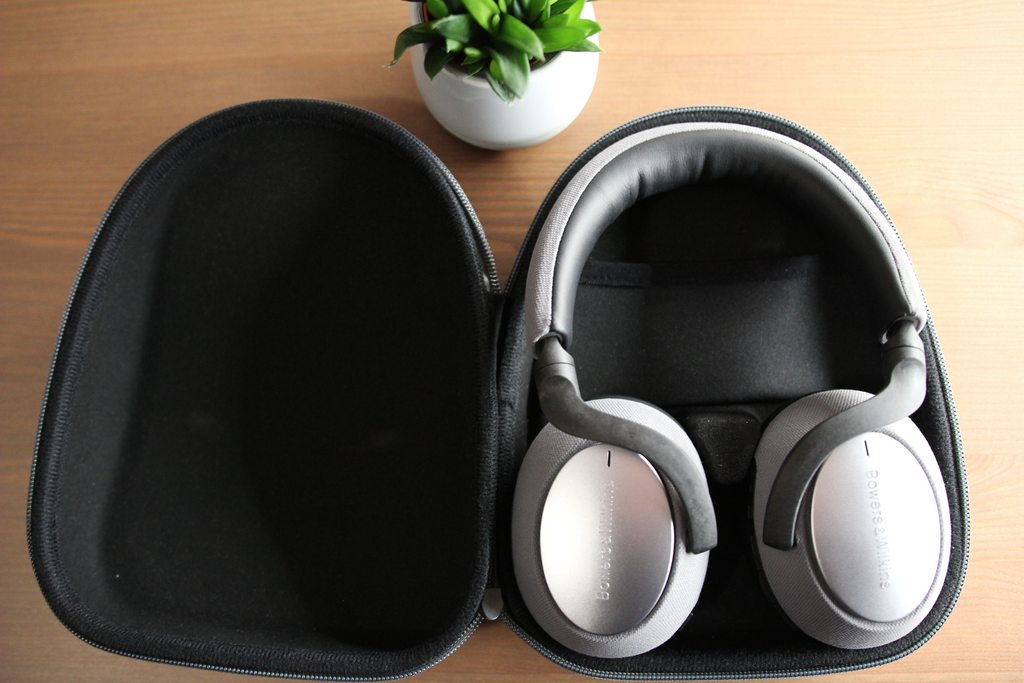 The main reason to buy such a device is, of course, it's active noise-cancelling function. And this has been greatly improved over the last generation: The ANC doesn't affect sound quality (or -signature) and is way more efficient. It's still a small step behind the capabilities of Sony's magical ANC-Chipset, but it's really close. For me, the PX7 still pulls ahead for one particular reason: Due to the tighter fit, it doesn't wobble on your head during rocky bus rides or short sprints and is less prone the notorious popping noises or other ANC-artefacts. Alas, the external microphones are not optimally placed, so they'll pick up a lot of wind noise on the highest ANC-setting, which can be very annoying. By switching to the low ANC-setting, this problem can be resolved, though. By the way: The competition (especially Sony) struggles with wind noise, too. So this seems to be an issue inherent to the technology. 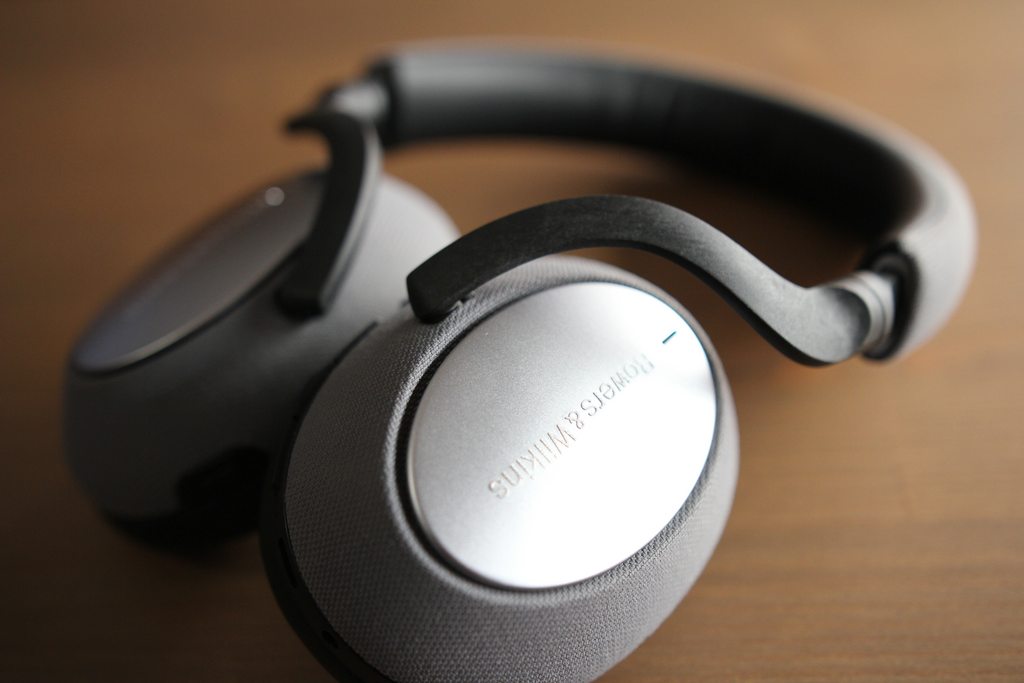 Just like all the other ANC headphones on the market, the B&W PX7 has its weaknesses. Especially the sound signature, that won't appeal to audiophile purists out there. All in all, the Britons have managed to put together a very convincing package of build quality, comfort, sound quality, codec support and noise-cancelling. In my opinion, the PX7 is the most compelling product in this price class and gets a clear recommendation from me!
Reactions: Aero Dynamik, tiagopinto, wolfjeanne and 4 others
View previous replies…

gxtoast
Thanks for the review. Are you able to review the microphone? Cheers, Nick

X1787X
Very good review. I'm not quite a audiophile and listen mostly to low quality files on the go so these should be perfect

Aero Dynamik
Very useful review. Thank you very much. "Especially the sound signature, that won't appeal to audiophile purists out there" I don't think it ever will be possible to recreate realistic sound especially in a pair of headphones, and I wouldn't be surprised if B&W shares that notion. Instead and think B&W's focus is to try to recreate the emotions that live sound can produce and I wouldn't be surprised if the B&W PX7 (which I haven't yet listened to) does an excellent job at that. I have the B&Ws P5s and despite having several options to choose from they have become my go-to phones. See if can avoid pulling the trigger on the PX7...
Read more…