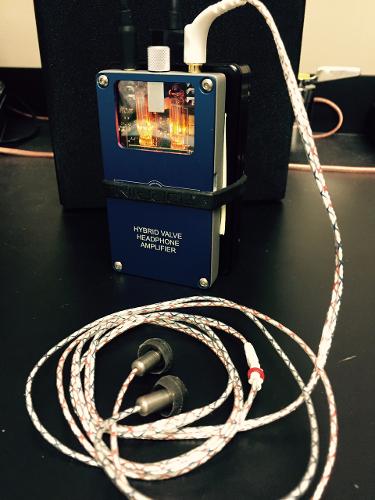 You are using an out of date browser. It may not display this or other websites correctly.
You should upgrade or use an alternative browser.
World's first portable Hybrid Valve Headphone Amplifier (with a footprint smaller than most cellphones). It's so cheap, so cheap that I don't want to buy it because I'm afraid it will sound bad just based on the price.. Haha.
Please go ahead and prove me wrong though. I've been eyeballing the new AK100II and AK-JR but getting away with spending 120€ would be just fine with me.
Sennheiser HD 800 S | AKG K3003 | CA Vega

I'm just so proud of this coming out of New Zealand. I might actually for once be able to try before I buy. It is insanely cheap but those who have heard the prototypes seem to like it. I asked whether there was a possibility of bypassing the output DAC in future models, just waiting on a reply. Also maybe the thread starter wants to change the thread title to just "First portable valve headphone amp". See if we can generate some interest.

venasa said:
I'm just so proud of this coming out of New Zealand. I might actually for once be able to try before I buy. It is insanely cheap but those who have heard the prototypes seem to like it. I asked whether there was a possibility of bypassing the output DAC in future models, just waiting on a reply. Also maybe the thread starter wants to change the thread title to just "First portable valve headphone amp". See if we can generate some interest.
Click to expand...

brooko said:
I should have a review sample by Tuesday or Wednesday (hopefully) - so review coming.
Click to expand...


Awesome! Just got a reply on Kickstarter to my above question: "Hi Andrew. Thanks for your input. Yes -if we have enough interest in adding a DAC, we will add this as a stretch funding goal and set this as a separate model."

Insulin is not a cure - please support the Juvenile Diabetes Research Foundation and help create a world without Type 1 Diabetes!

billybob_jcv said:
How is this the "world's first"??

Read the second part of the heading ....  "with-a-footprint-smaller-than-most-cellphones"

I'm guessing that was what OP was meaning.

Miu Audio used to have one of those....

brooko said:
Read the second part of the heading ....  "with-a-footprint-smaller-than-most-cellphones"
I'm guessing that was what OP was meaning.
I should have comparative photos later in the week.
Click to expand...

purpleangel said:
The "with a footprint smaller then most cellphones" was just something I copied from the review, as I could not think of anything better to put in the thread title.
Click to expand...

Thanks - I'm assuming that's why they've made their claim (size) - because there are definitely other portable tube amps out there (I've owned one previously - the PortaTube).  I guess that's why I'm so interested in this.  The PortaTube sounded sublime.
“Sometimes, the truths are those things you want to hear, and sometimes what we call truths are habitual lies we're comfortable with.”
iUSB > iGemini > iDSD > iTube > LSR305s OR IMS X8 + Celestion F10s
Other Amps: Q5 / VE Enterprise / XRK NHB
DAPs: FiiO M9, X7ii, X5iii, / iPhone SE
HP : HD800S / HD600/ HD630VB / MS Pro / Audeze Mobius & IEMs : q-Jays / Curve / LZ Dipper / 64 Audio U10

A bit more information from Martin.

There is no volume pot - that's controlled from the phone/DAP/source.  Initially he was going to release two models - a high gain and low gain, but he's just had a new prototype completed (he's waiting on PCBs to arrive shortly) - and this will give buyers 3 options (high / off / low).

I'm going to quote some of his message to me - as I really like how open he's being with information.

I'm sending you two Amplifiers. Your question #1 is relevant to this. You're right there is no potentiometer. In designing the Amp we decided the best way to control the volume was at the source eg MP3 player. We wanted to achieve uncompromised sound and found that all the small carbon tracked potentiometers small enough for portable gear added noise to the signal. We had gone to a lot of bother using metal film resistors throughout so we wanted to stay true to the design.

However we noticed that with some very sensitive headphones (particularly IEMs) there was some background 'hiss' present. The hiss was not present at all on some other headphones. So with the new design which is coming out for Kickstarter soon we've added a 3 way ON/OFF switch where the centre position is OFF and then depending on LEFT or RIGHT you can select high gain or low gain depending upon what type of headphones, their impedance etc. This completely removes the unwanted hiss is you have very sensitive headphones or in ear type.

I haven't got the new PCB's back for this design yet they're still a week away so I've sent you two amps, one set at high gain and one low so you can try them both.

Second question- output impedance. The OPA2134 can handle anything down to 4 ohms. The data sheet in fact states it is protected against a direct short at the output so there's no output impedance restrictions. I tried today some Sennheiser HD700 which are 150 Ohms and there was plenty of drive from the Valve Amp and plenty of volume.

Third question- I'll set up some tests for the 16-300 ohm loads. I'll run the Amp's output into these loads and measure the voltage across the load on the oscilloscope and give you these figures in a couple of days.
Click to expand...

I've explained that I'm looking for actual output impedance on the headphone out - so we can check damping factors. And by next week we should also have power output figures.

He's also considering adding a volume pot if enough people request it.  I've advised that it might be worth looking into - especially if people would prefer using it from a DAP with a line-out.