Menu
Log in
Register
Install the app
You are using an out of date browser. It may not display this or other websites correctly.
You should upgrade or use an alternative browser.
Sony Walkman NWZ-X1000 (UK out NOW, US version out mid-June)

US pricing via Amazon.com

It will be made available from mid-June.

Will be available from tomorrow at your local high street branch (13 May 2009) according to Pocket Lint. Amazon UK, play.com and SonyStyle online still has the release date set at the end of the month.


Here's a video by Sony Japan explaining the functions and UI:

The Japanese version, NW-X1000, will be out on the 25th of April. It will be available in both black and red colours. 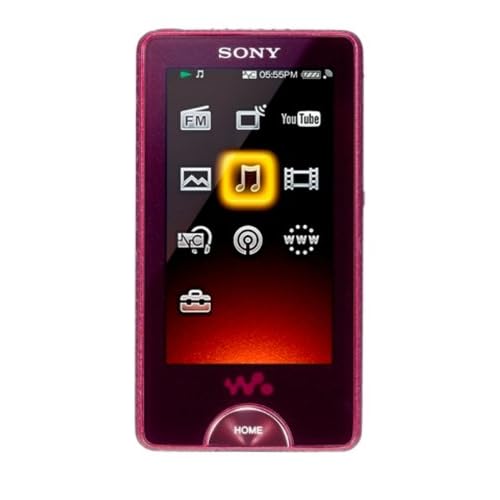 Wow. I am really digging the design. It has both touchscreen and dedicated buttons (volume, play, skip, back) ensuring the best of both worlds. It also has a nice OLED screen. Other features includes WiFi, active noise cancellation, digital amp, Youtube and web browsing. It will be available in 16GB and 32GB flavours.

Really nice looking (judging by the crudely drawn render) with some reasonable new features. I personally won't be interested in this as I require tactile feedback for 'blind use', but this still look slick enough for people thinking of jumping on the touchscreen DAP wagon.

Sony are fast! Two or three new models each year

My only wish is if they would let you listen to your own music on it in stores, hook it up with a laptop or something...this inflexibility is holding them back.
They know how to make a great player, but with all the choices out there many people don't want to buy it 'as is'.

Nice! now if Sony can get their shi** together for PS3 (getting better) and PSP (not so much) that would be nice.

Their consumer department seems to be doing fine right now. They still need to get some form of lossless codec on this though.

I agree with the PS3 and PSP, though I am more annoyed with Nintendo now than with SCE.

Everything's going to touch screens... it's just easier to manufacture...

Not too sure how I feel about it but I have been looking into getting a Samsung P3 when they come out.
Home: Foobar2000 > Alien USB DAC > CIAudio VHP-1 > Audio-Technica ATH-AD700
Portable: Sony NWZ-A728 > Etymotic Research HF5

BTW, this isn't Sony's first touchscreen DAP. If the iPod Touch can be considered a DAP/PDA, then so were their now discontinued Clie models. The VZ90 released four years ago had a hot HVGA OLED display, WiFi, MP3 playback with two memory slots (CF and MS Pro).

If this sounds anything like the S639F, isn't too expensive, retains the S639F's WAV support, and I have a job, it looks like I might have to buy this.
Quote:Originally Posted by bonemOn the back of the box it says "WARNING: Strictly prohibited when using condoms". They didn't mention anything about IEMs so I went ahead and used it.

Sorry for the double post, but let's start a petition to ensure that Sony prices the 16gb model below $270. I know it seems like it will be useless, but if we start here and now, maybe it will have spread over a good number of other sites by the time the new player is out.

Use this site or something similar.
http://www.petitionspot.com/
I tried, but it won't let me make a username. Even when I enter the most random thing possible, it says it's taken.
Quote:Originally Posted by bonemOn the back of the box it says "WARNING: Strictly prohibited when using condoms". They didn't mention anything about IEMs so I went ahead and used it.

They need to bring ATRAC back for this run before I even think of wanting to own it, otherwise, my NW-HD5 will do it for me.
Ray Jackson
HEAVY METAL WARRIOR, LTD.  Where the fans come FIRST!!!
Web:www.BIGHMW.com   MySpace Music: www.myspace.com/bighmw  Facebook: http://www.facebook.com/bighmw
Soundcloud: www.soundcloud.com/bighmw  BIGHMW TV on YouTube: www.YouTube.com/BIGHMWOfficial,
Twitter: [size=1em]www.twitter.com/bighmw (I'm listed on twitter @bighmw, use the #bighmw)[/size]

DJGeorgeT, keep in mind the S630 and S730 weren't listed with WAV support on a lot of sites. I think this player will at least support WAV.

OGG is a good idea, though. And I would LOVE to have FLAC, but I guess you can't win in everything.
Quote:Originally Posted by bonemOn the back of the box it says "WARNING: Strictly prohibited when using condoms". They didn't mention anything about IEMs so I went ahead and used it.

My point is, just because it isn't listed, doesn't mean it isn't there. The thing hasn't even been seen yet.
Quote:Originally Posted by bonemOn the back of the box it says "WARNING: Strictly prohibited when using condoms". They didn't mention anything about IEMs so I went ahead and used it.
You must log in or register to reply here.