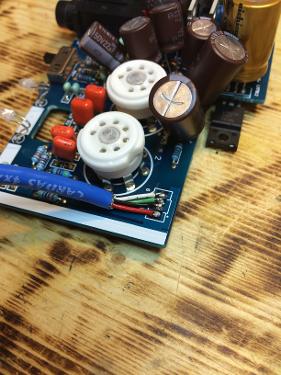 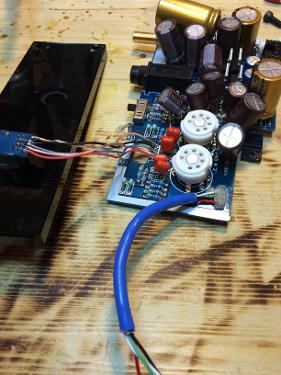 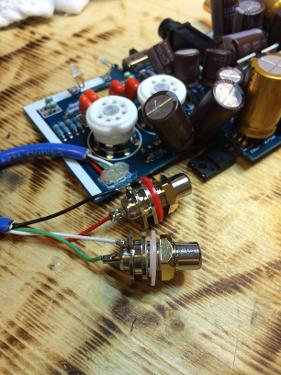 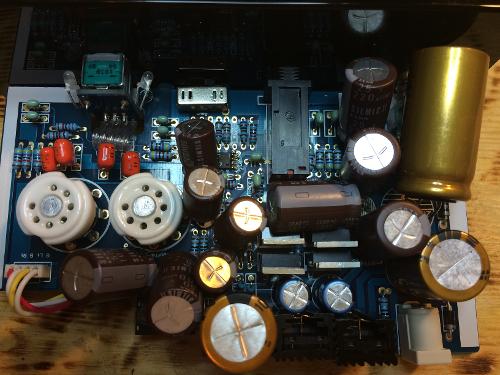 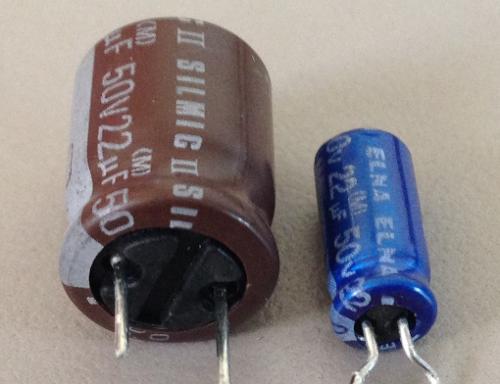 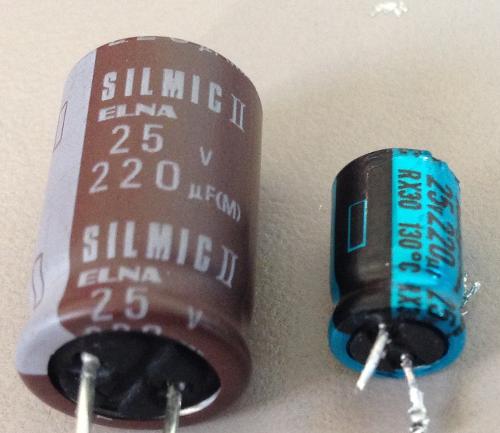 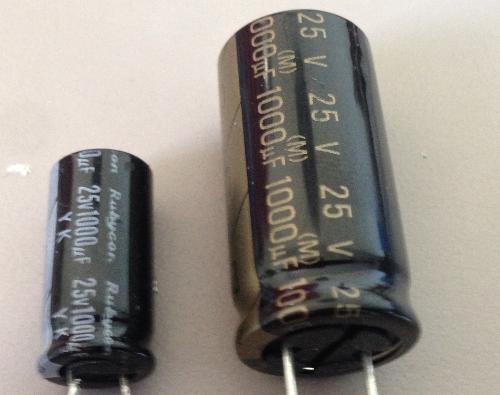 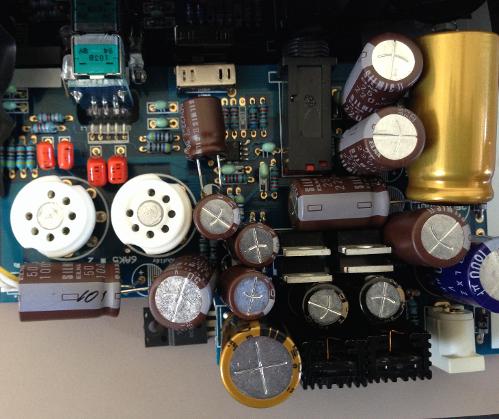 Wow oh wow, what a combo when it’s all done and all for less than $350!? I started modding the he-300/EF3 combo a few weeks ago and have just finished all the tweaking I think it could stand.

HifiMan has priced this combo at $250, which pretty sweet when you consider they sold the headphones alone for $299 not so long ago.  I thought for this price I had a low risk $ risk system to play with.  Here’s what happened:

I allowed the system at least 100 hours of burn in before I played with anything.

Cans
The mods on the headphones was pretty common to begin with.  I removed the felt as suggested here.  However, the treble bounced all over the place without any dampening.  So I created a thinner absorption layer with two types of wool fabric: at thick textured wool around the driver and a thin wool to cover the driver openings.  That brightened things up for my liking without all the distracting reflected sounds.

Tubes
Next I attacked the amp.  First I replaced the original Chinese 6J1 tubes with Russian 6ZH1P-EV tubes from Yen Audio.  That was an easy improvement.  The change wasn’t as dramatic as I hoped, since the tubes were $40 on their own. Still there is no way I could create the final result with the 6J1’s.


Caps
The third step was to start swapping out the electrolytic capacitors.  The original ones were a few cheap Elnas and a bunch of Rubycons.  The challenge is that the original caps are tiny compared to Elna Silmics and higher quality Nichicons.  I had a choice.  I could leave them alone and have a pretty view from the glass top of the amp or I could do some funky placements with inconsistent lead lengths to get them all to fit.  I chose the latter. As you can see from the pics the size difference is huge, but you knew that.  It took a lot of planning to find a way to place them.  I wanted to have Silmic II everywhere, but it wasn’t possible.  So I used a few pairs of Elna Cerafine or Nichicon FGs.  I replaced a total of 14 capacitors, but not all at once.

First swap: 2 50v 100uf.  The change was an immediate clarity in the bass range.  The base drum and electric bass are now two distinct sounds even when they play on top of each other.  I’m not an amp engineer, so I have no idea why that frequency range changed, but it was as dramatic as the tube swap.

Second swap: 4 50v 22uf.  The size difference is monstrous.  At first I thought, “No way.”  However with a little redirection and looking at the board from various angles, I got them all in there.  There wasn’t a big change here.  In general, I thought it was nicer, but that could just be pride of making a mod.

I’m not sure the purpose of the single 1000uf cap, but there was only one and I swapped it.  Due to size I could not replace both power supply caps.  That made me uncomfortable, but it was for the power supply so maybe an unmatched pair wouldn’t matter. Outcome
The result blew my socks off.  Getting rid of those tiny Rubycons make all the difference.  Everything has come to life.  This is a completely different amp.  I’m not adept at describing sound differences, but here’s my attempt.

The best objective result I could muster:  I’m going thru the Philip’s golden ear program.  I was stuck in a few lessons at the gold level.  However, after this mod I had no trouble making distinctions for the quizzes and passed two more exercises immediately.  The difference was that clear.

Maybe the best was to describe it is with Diana Krall’s Live in Paris album.

This was a live recording and you expect some reverb.  However, with the original setup I couldn’t tell if it was added studio-style reverb or natural reverb from the venue.  After the mod there is no question.  If fact I can even hear a stage left echo, some distance away.

During applause you can make out the different hand clapping styles, rather than sounding like cloud of white noise.

The brushes on the cymbals in ‘Deed I Do' sound like brushes and not static noise in the recording (which is what I originally thought it was).

Anthony Wilson plays a Les Paul, not just any guitar. You can hear the distinctive warm resonance in the guitar body.  When John Pisano is playing a classical guitar it is obvious we are hearing an acoustic.  You can even pick out the occasional string buzz. In other words, there is enough detail now to enjoy even the subtle differences between the two.

Vocals everywhere are improved.  Nuances in voice is clear.  Also, vocals are not blended in but stand out as they should.

In “A Case Of You” the empty frequencies are empty.  In quiet passages, you can hear a hacking cough in the 20th row just left of center.  I don’t think he’s a smoker, just a dry throat (hahaha).

I hope somebody can explain why tiny cheap caps restrict the reproduction so much.  Are they creating noise or adding harmonics - or just generally muddy.  I have no idea.
Share This Post
post-10600913
Post #2 of 16

If any lurkers are interested in the EF3 mods ....

My Tung-Sol NOS tubes came and I finished the comparison:


(For other tube rolling ideas for the EF3: http://www.head-fi.org/t/563884/little-dot-tube-amps-vacuum-tube-rolling-guide)

Mods on the EF3 don't seem to generate any interest on this forum, but I have to record the findings somewhere.  It's just too great an amp at this price to keep to myself.
Share This Post
post-10619372
Post #3 of 16

Hey iano,  have you started yet?

One thing I ran into was the PCB holes.  They barely fit the larger leads.  I had to carefully ream out any excess solder.  It wasn't a problem just made the process slower - care is required.
Share This Post
post-10626036
Post #5 of 16

No starting this weekend...good heads up though

Would tubes be the next best thing to the cap mod and would that alone make nice improvements or would the SD600 be a better option? I have no experience in modification.

Thanks for all the good information about the mod of the EF3 amp. I finally received all the parts and finished the project last night.  I'm burning in right now and hope to report back in a a few days.

Here is how mine turned out. Next, I'm working on different tubes. I replaced the Chinese ones with Sylvania and will experiment with some different ones.

Ha!  Yours is squeezed in too.  It's pretty tight in there, but it works.

Yes, for sure.  The stock parts of the amp are pretty cheap.  I finished the upgrade of the RCA jacks and wiring also.  What a HUGE difference!  The cheap thin tin wire was so bad.  I used Cardas RCA jacks(around$10 each) and Cardas 24x4 headphones cable.  There is no distortion now with my HD600's.  I also replaced the wiring for the volume control because I pulled the wire lose while taking it apart.  I just used Mogami 2893 26AWG for that.