I'm trying to choose between the IRiver H 320 and any of the I-Pod's. How does the sound compare. The color screen is very cool and for the price if it sounds as good as the I-pod I might go the way of the I-river. Any suggestions??
Regards,
Joe
Feedback http://www.head-fi.org/forums/f12/audiojoe1-121254/

I have an iRiver H120 and I like the sound much better than my iPod Mini. Also, you get more features with the iRiver including an FM radio. If the price is the same, I wouldn't hesitate to by the iRiver H320.
Share This Post
post-1395005
Post #3 of 16

I simply cringe at the title of this thread... the possibilities for fanboy flame-wars seem limitless.

Me too, butHopefully I can squash this possibility with some objective analysis (yeah right). Iriver products seem to be at the pinnacle of the sound quality pyramid of harddisk players, with their fully adjustable EQ and true optical out.

On the other hand, Ipod has some interesting advantages over any other players. Apple stores have been known to test an ipod, and if it fails, pop a new one out of its case and hand it to the owner for use Ipods also have true shuffle (random), something no other products have. (at least as far as i know). There is also a clear commercial advantage that has spawned a slew of products specifically designed for the ipod: iskin, otterbox cases, higher quality recording microphones (though these may be had for other brands as well), special cables and whatnot, tons of companies within which you may buy screens or better batteries at low prices installed, the list is endless.

From a pure Audiophile point of view, it has become clear to me that the Iriver even exceeds my iaudio M3L, mainly because it has the optical out (though that is only one of many factors).

Truthfully, the sound to first and third party product argument seems kind of lame if all you care about is sound, but in practice, being able to choose from a bunch of specially designed equipment for your Ipod is a decent argumental point, especially since Ipod is beginning to shape up its act in the battery life department (their most hotly agonizing issue though primarily in the past).

Unfortunately, and the reason I chose the Iaudio, is that iriver has the nasty habit of delaying their firmware for months and months, annoying the crap out of their fanbase who just want a simple adjustment. Lastly, you should delay purchasing any of them until you look at the product and firmware and completely enjoy it, cause all of the companies have the habit of halting their firmware when the newest product hits the shelves. It's just a quickly advancing technology.
Oh i should mention that some people have big issues with the ergonomics of the interface and all sorts of software issues, one of them is that the Iriver supports more file formats than the ipod products: this is a HUGE issue to many audiophiles who encode in something like FLAC or OGG. Others don't care cause they like the AAC and MP3 that ipods allow.

P.S. to other posters: I'm not going to look at this thread again, so flaming me won't do any good.
Help the poor; Won't you help poor me - B.B. King

I went through this same question. I had an Iriver ihp-120 and an ipod 4th gen 40gig. I listened, tweaked, and played with both of these players for a month. In the end I just like the way the ipod sounds better. Feature wise the Iriver wins hands down, but how often do I listen to the radio? Never. Would I ever record with it? Not likely. I sold the Iriver and haven't looked back.

Ok thank you...sorry to spawn any fanboy or flame wars but I guess I just wanted honest opinions truely based on sound quality and that is what I got. Thanks again...I will be purchasing the H320. However I did as you said and noticed that there is no firmware upgrade for this yet lol! I think that the model has been out for some time as I'm getting it on closeout for a greatly reduced price.
Regards,
joe
Feedback http://www.head-fi.org/forums/f12/audiojoe1-121254/

Yep- I really hate Apple with a passion and quite actively want them to die, but my girl's mini died in about 2 months and the store just gave her a new one... no hassle.
Share This Post
post-1395144
Post #8 of 16

Look, you'll get a gazillion replies, with people trying to convert you to buy the thing that they own themselves.

Why? Because people like to feel secure that way.

Let me start by saying why you shouldn't buy iRiver (which I own myself):

- the menu system is garbage (designed by incompetent nerds), very hard to navigate
- you won't have nearly as much accessories for it as for iPod (cases and all sorts of gizmos)
- iPod looks cooler (general consensus says this)
- iPod's sound is smoother, less up-front
- iPod has AAC support - iRiver does NOT

If you are willing to live with those failings and some others, then go out and listen to BOTH and decide for yourself.

Soundwise, I find:
H320 - more upfront, capable of much more bass, less smooth, sound seems processed and less natural. Amplifier noticeably hisses when the unit is on, however the hissing is not noticeable when something is playing in the foreground (unless it is a quiet track).
iPod - more open, airy, more smooth and natural. Can't detect any hissing with e2 or ER4.

I use the H320 more than the iPod because it has a more street-friendly sound and is more resistant to scratching when I am out and about. I never know when I might need to record some lecture with the H320's mic as well. I also like to listen to morning talk shows so the radio is handy for that. The H320 also is good for songs that are improperly tagged since it uses a file-tree structure. As for the iPod, it supports audible, has faster response times to commands, and even though I am used to the H320 menu system by now, I still prefer the iPod's (once everything is properly tagged) menu structure. I like the sound of the iPod more in quiet environments but can easily be happy with the H320 as well. Actually it depends on genre of music as well. I pair the ER4 with the iPod and the E2 with the H320 since they seem to be best matched that way. As already mentioned, it is best to try both out firsthand if possible.
My feedback
Share This Post
post-1395209
Post #10 of 16

make it simple for ya

I just felt it was a much better player to me since it has more of what I wanted than the iPod, like ogg vorbis support which I need, recorder, line out and in on the player, better battery life, sounds better to me, and I have no problems at all with the interface of it

All in all they're both decent units and the sound quality is arguably "close"on both. I ended up keeping the Iriver due to features I preferred.
TEAM Why Am I Still Here?
MY FEEDBACK: https://head-fi.org/f/threads/wolfen68.36929/
Share This Post
post-1396391
Post #13 of 16

The iriver does not have a "real" line-out. A good line-out is a selling point for me.
Home rig: Toshiba A1 HD-DVD player > Gilmore Lite > Sennheiser 650

The iRiver's hardware has separate pins for line level signal. The Philips UDA1380TT chip does work for both true lineout and headphones out. You may want to read this: http://www.fixup.net/talk/topic.asp?TOPIC_ID=791 .
As you can see the lineout is actually a true lineout. As other have mentioned if you use the player with no equalizer, and full volume, the signal will be basically untouched. Also remember that the chip of both the H100 series and the H300 series is the same. So both h100 and h300 have a true line out.
iRiver Players used to rule :lol:
Share This Post
post-1396419
Post #15 of 16

I have to admit I like the i-pod look. 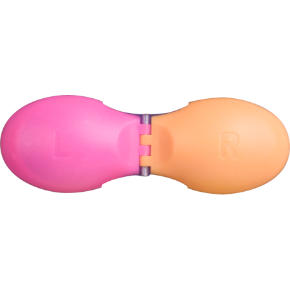