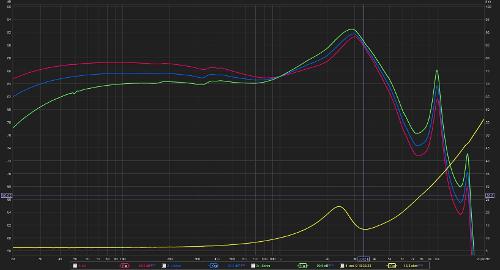 Now before you start a flame war please read my post thoroughly.

The case that I am thinking of is when you use replacement cables for low impedance in-ear monitors (IEM). Some IEM have very low impedance, and as you probably know, this means that you need an amplifier with a very low output impedance in order to have a high damping factor. Without a high damping factor, you will get poor bass fidelity, and depending on the headphones' impedance response, alterations in the frequency response of your headphones.

One example could be the Unique Melody 3X, which has a impedance of approx. 14 ohms throughout the bass region and an uneven impedance in the mids and treble with min/max of 12/18 ohms. If we were to use this earphone with, lets say, the Linum Music cable, which has an impedance of 5.3 ohms, the damping factor would only be 2.6 below 200 Hz, 3.4 at best and 2.3 at worst (assuming that the source impedance is 0 ohms). Now, I do not own the Unique Melody 3X, nor do I have the Linum Music cable, so this is purely a hypothetical example, but surely there must be real life examples of low impedance IEM that are used with cables that have high impedance, given the many options in both categories.

If you have better examples of low impedance IEMs and/or high impedance replacement cables, please let me know.

it's a well understood phenomenon and I doubt many people in here would dispute it. when we talk about cables having no meaningful impact, we assume a good damping ratio so that impedance variations don't really risk making more than 1db of variation.

now if you take the cable as a part of the amp, and look from the IEM perspective, then any extra impedance will change the damping ratio and possibly have various effects on the sound. that variation can come from the amp and from the cable, it's all the same for the IEM that will "see" the sum of both.some possible effect:
-signature change if the IEM has a wild impedance response over frequency(the lower it goes, the wilder the frequency response change).
-more or less roll off in the low end if the amp has protective caps at the output.
-possible impact on the sound of the headphone from loss or increase of the electrical damping.
-even in extreme situation, we could imagine an amp that is fringing instability from too low a load, and a cable with more of less impedance might just be the last push over the edge. I would expect that to be rare, but not impossible.

now if the IEM has an impedance well over 10times the impedance of the amp at all frequencies, then all those effects from a different yet proper cable should be inconsequential as far as audibility is concerned. thus why we all insist so much on a good damping ratio for those who don't know exactly what they're doing. but with IEMs it's not always easy to get an impedance curve so sometimes people think they have a good damping ratio but they don't :'( here is something I got to measure myself. the yellow line is the impedance graph of the IEM with the axis in ohm on the right.
and the rest are the frequency response measured with some added resistors(so really nothing fancy), and aligned at 1khz, obviously the higher the resistor the lower the loudness in reality.  the behavior of the signature is the same as if a cable with increased resistance was used.
as always the wiggling at 50hz comes from some noise in my ADC and has nothing to do with the IEM or the amp. so please disregard that 50hz.

I can provide examples with higher impedance IEMs and almost totally flat impedance response, but the result is as expected, nothing really changes significantly. at least on that source.


other specs can be altered on a cable of course, it's not all about resistance. but it's the most common and obvious change as it impacts loudness in more or less complicated ways.
What is freely asserted is freely dismissed.

here is something I got to measure myself. the yellow line is the impedance graph of the IEM with the axis in ohm on the right.
and the rest are the frequency response measured with some added resistors(so really nothing fancy), and aligned at 1khz, obviously the higher the resistor the lower the loudness in reality.  the behavior of the signature is the same as if a cable with increased resistance was used.
as always the wiggling at 50hz comes from some noise in my ADC and has nothing to do with the IEM or the amp. so please disregard that 50hz.
Click to expand...


Very interesting data. What IEM did you use and what were the resistance of the resistors I took a closer look at the picture, and I can see you used a 3 ohm and a 8 ohm resistor. What equipment did you use to measure the frequency response?

Damping factor not only affects frequency response, it also affects the 'damping' of the speaker. This mostly affects the bass, were one would expect a more floppy bass control. Could you measure how the same IEM's respond to a 50 Hz square wave with the different resistors? Could be interesting to see if the fidelity is indeed worse with lower damping factors. If possible, then match the sound level at 50 Hz first.
Share This Post
post-12769170
Post #4 of 5

F111 . the resistor values I've added to the original cable are in legend at the bottom of the graph(except for the yellow graph where it's just the impedance I've measured where the cursor is), the Odac/O2 as source so add about 0.6ohm. and measured with a vibro veritas thingy into a cheap startech input because the veritas doesn't care to work with my focusrite ADC :'(
all that looped on my laptop measured with Room EQ Wizard.

I don't have that IEM anymore, it was someone who sent it to me just so that I could measure it. but I could certainly find something with less massive impact yet still enough variations to be measurable.

about square waves, I don't think it's something REQ can do, and I'm really a noob for anything outside of it where I've struggled a long time finding out how to set everything ^_^ . how loud can I go with square waves without risking damaging an IEM? I could probably just record with audacity and be done with it, but without any compensation for the coupler itself, I wonder how much good that will do?
for the damping itself affecting the control of the low end, on IEMs it's really trivial as far as I know. those stuff have nowhere near the weight and volume of air that actual speakers have to move. most cases for me of low end dropping on IEMs were due to the impedance curve of the IEM, or to caps on the amp. even adding 150ohm I haven't noticed any obvious mess with my IEMs(most are BA so there is that). I've looked for the few flat impedance dynamic IEMs I have, but I haven't kept the various resistors test that I still do every time to confirm my impedance measurement to be right. so I'm guessing there was really nothing worth looking at. I have distortions values and even an impulse response or CSD graph that I can create, but TBH that rig doesn't have the definition for those stuff to really have any meaning. someone passing down the street probably have more impact on the results than many of my tests. frequency response variations is really the only thing I can trust to some extent.

rin choi's blog (M.R.O) often has a graph or 2 where he added resistors(changed filters etc) like I did. except that he had actual means to do proper measurements

. maybe you'll find that more relevant with more diversified examples than my newbie stuff.
What is freely asserted is freely dismissed.

Once the damping factor is well above 10 it's out of the picture.
It would take very long and very small cables to even consider their end-to-end resistance.
Share This Post
You must log in or register to reply here.