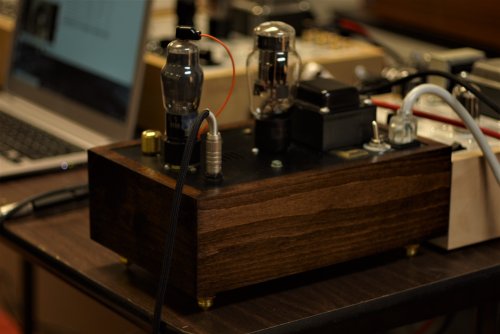 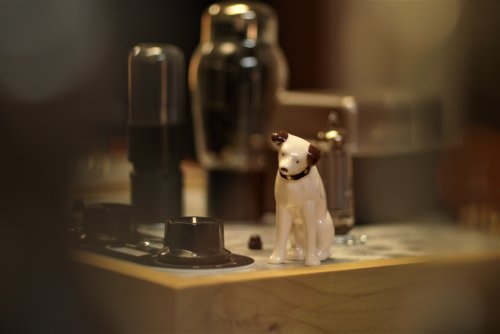 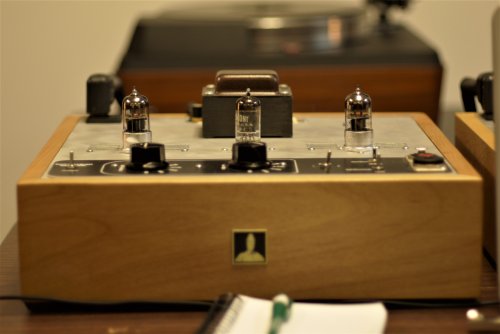 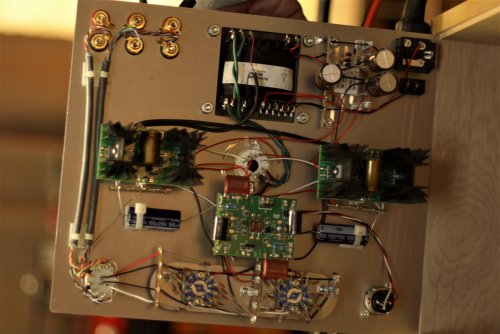 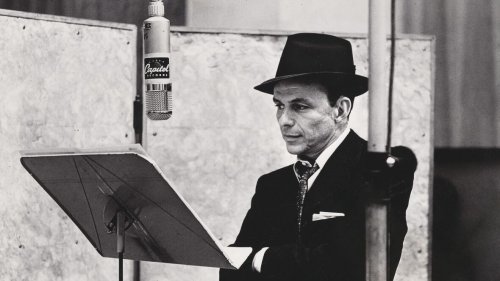 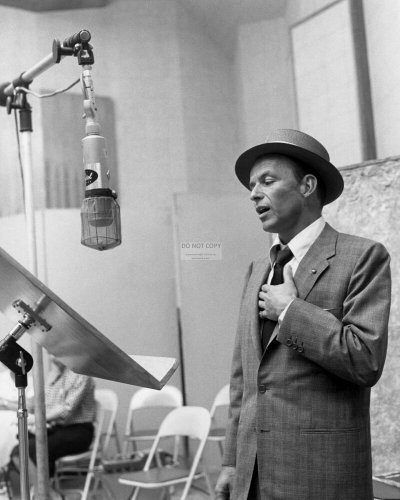 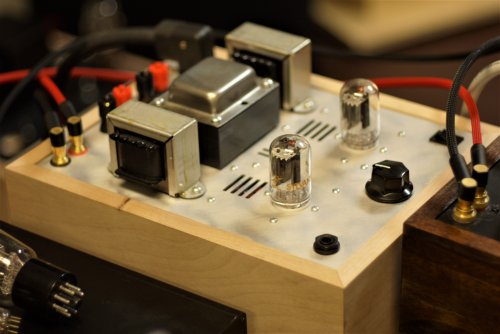 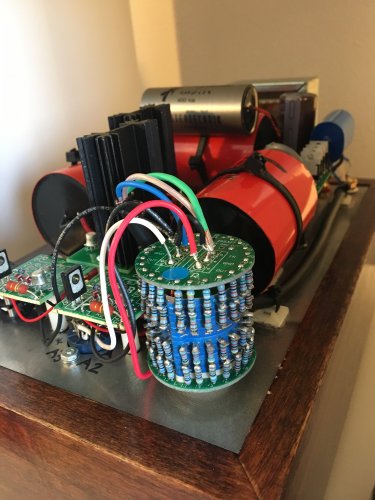 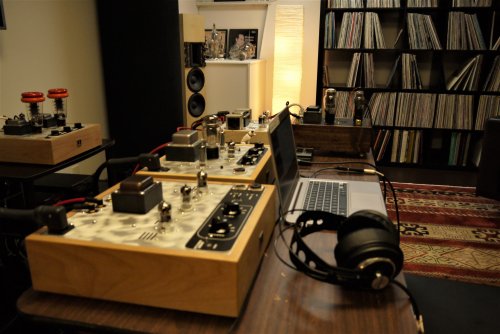 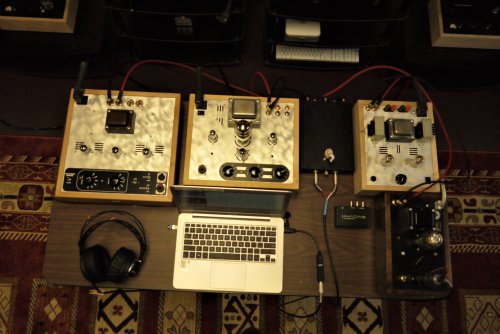 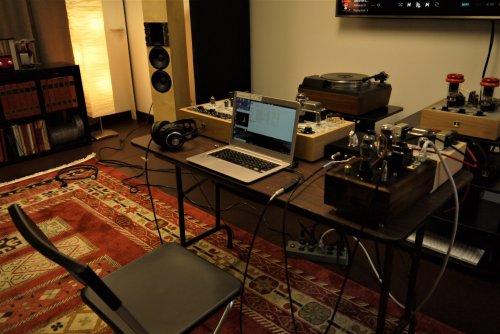 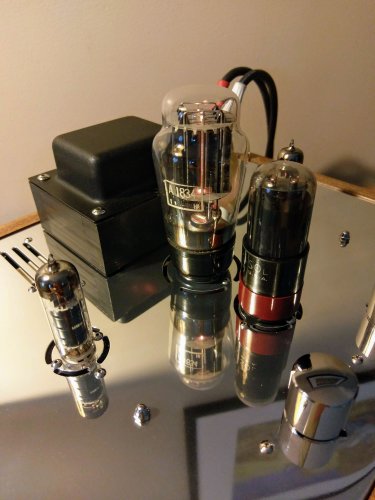 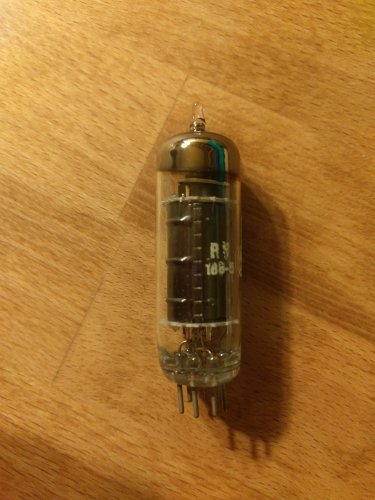 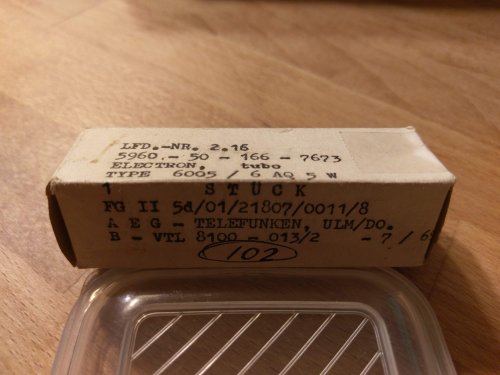 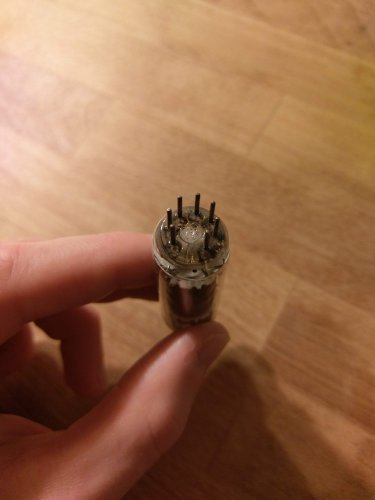 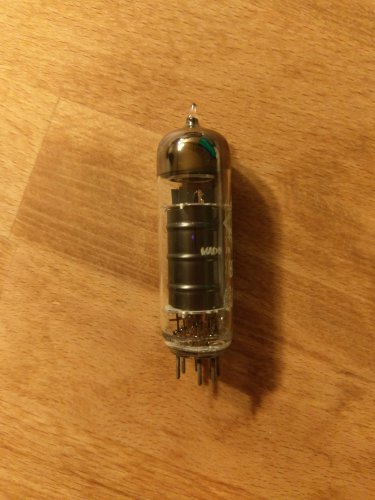 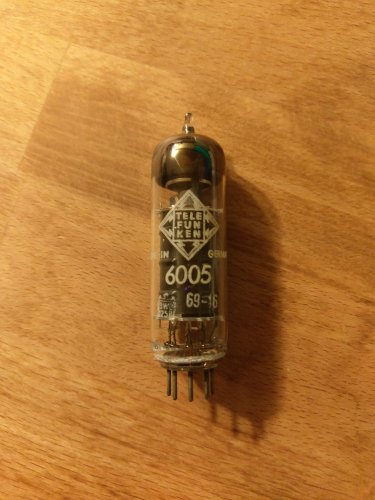 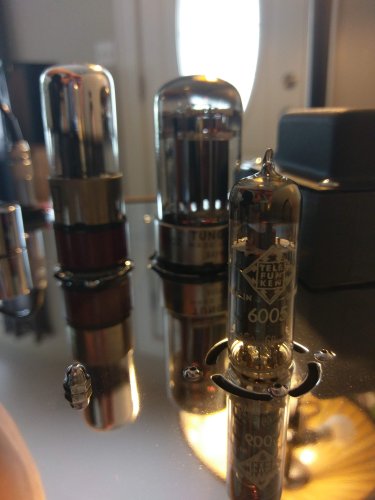 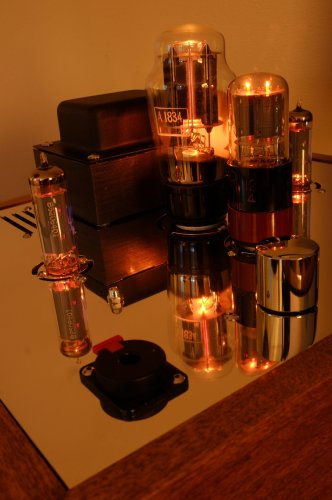 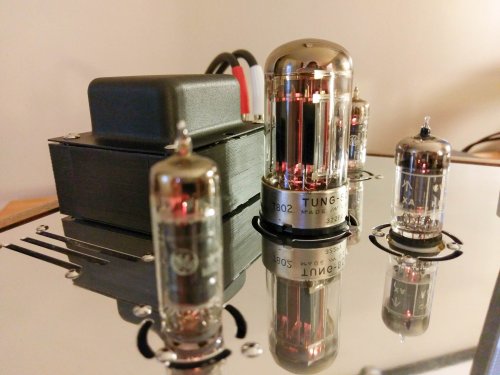 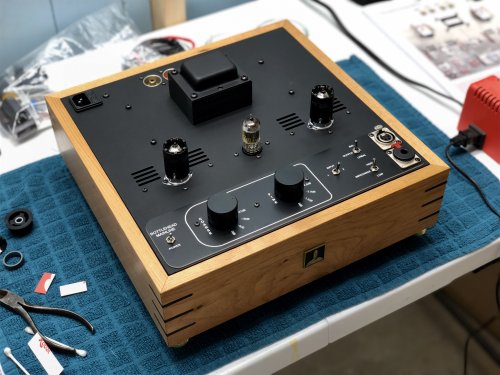 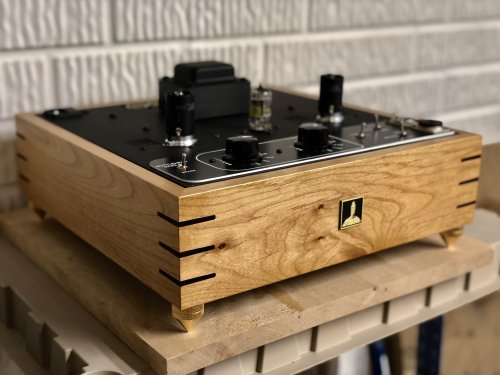 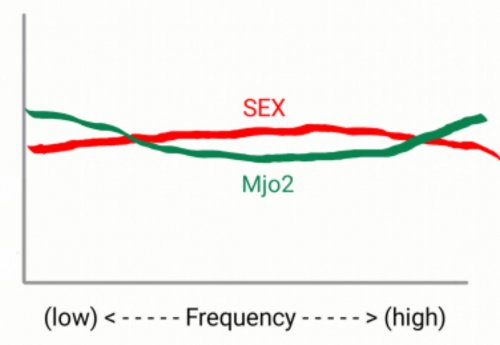 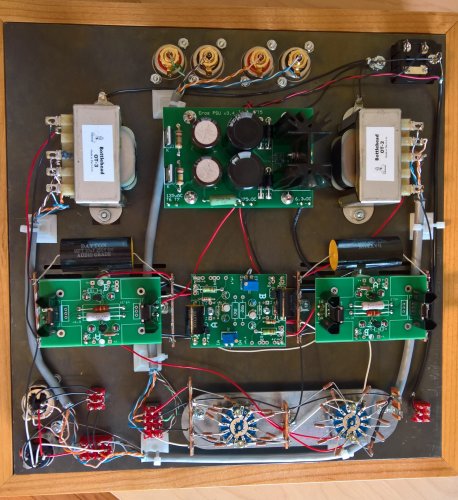 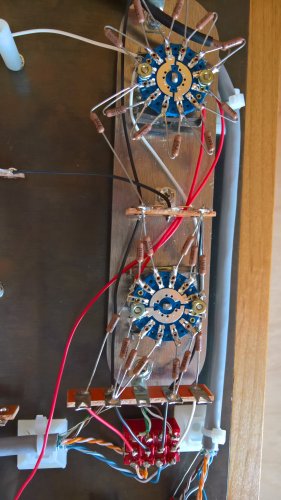 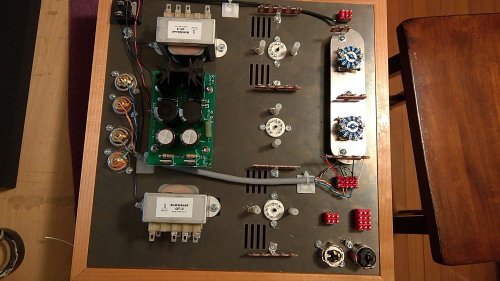 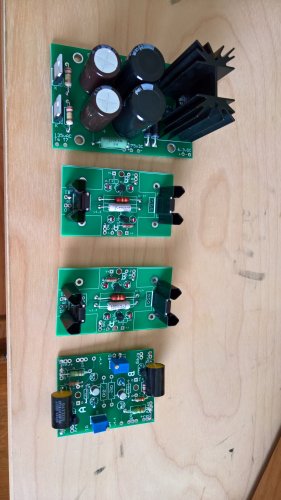 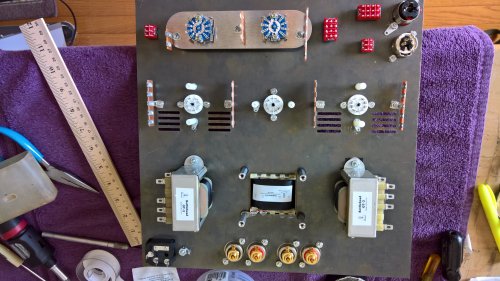 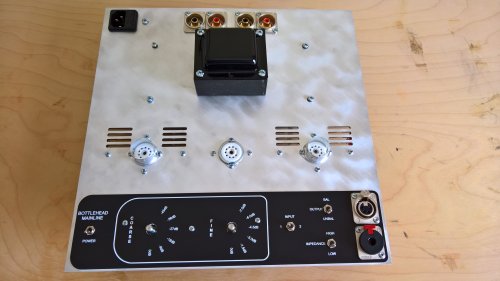 I'm new to DIY world so I'd like to start with a kit and the Crack caught my eye.
Since is an OTL amp It does not pair well with my LCD-X.

I'm looking for advice on what parts change/add/remove to make it more powerful on the 20 ohm region.

Also I'd like to add a second pair of RCA variable output to use it as preamp.

I'm new to DIY world so I'd like to start with a kit and the Crack caught my eye.
Since is an OTL amp It does not pair well with my LCD-X.

I'm looking for advice on what parts change/add/remove to make it more powerful on the 20 ohm region.

Also I'd like to add a second pair of RCA variable output to use it as preamp.

I think you'll find this requires an Output Transformer. The Crack being an OTL ( Output Transformer Less ) Amp outputs at the native output of the tubes, there is no transformer to change the output impedance. While it may be possible to introduce a Transformer, I'm pretty sure it would destroy the unique characteristics of the Amp itself. Best just to buy a S.E.X. which is designed for high Watt, low impedance headphones.

@Doc B. I have a question regarding the S.E.X.

Is there any difference between the two pair of RCA out?

Is it possible to implement a switch to select RCA or headphone out?

I'm afraid I don't understand the question. There are no RCA outputs on a S.E.X. amp, only binding posts and a TRS headphone jack. The binding posts are cut out when the headphones are plugged in.
Dan "Doc B." Schmalle
President for Life, Bottlehead Corporation
Managing Director, The Tape Project, LLC - retired
Share This Post
post-13525274
Post #1,687 of 1,960

Is it possible to have a balanced 4 pin XLR from the speaker taps?

Anywhere to buy such wire or individual parts to DIY (which ones)?

Is it possible to assemble everything inside the S.E.X. and make a hole in the chasis for the XRL output?

Sorry for the amount of questions but I'm reading the whole thread and catching up some possible issues.

CarlosUnchained said:
I read that the noise floor for low impedance planars is present. I have the LCD-X wich is the most efficient of all. If that's an issue with the LCD-2 I guess the S.E.X. is not a good match for the Xs.
Click to expand...

deserat said:
Oh my. I had to send my Mainline off for repair to complete it ( turns out there was a short ). Got it back today and it's plugged into my work rig. ( Bimby source ). WOW!!!!!!!!!! Can't wait to get this home and plug it into the Gumby. I've a feeling the HDVA600 will be going up for sale very soon. My first thought was that it was too polite, but turns out it's the kinda politeness that hides great richness... like a person of such refinement that by shaking your hand makes you feel glad to be alive.

So I've been home now for a couple of hours and bouncing between genre's on the Mainline and HDVA600. Honestly it's a tough call as to which amp I'd call better at this point. They are tuned differently, though not much. The HDVA is brighter but has more bass extension. The Mainline feels slightly more natural in the highs and hits harder in the mid bass. The HDVA has slightly larger sound stage and images better. I'd also give a slight edge to the HDVA in the dynamics department. Though on a number of tracks ( Danny Elfman's Saranada Schizophrana - Piano's for instance ) it very difficult to tell the two amps apart.

Granted the Mainline has about 8 hours of play time on it, and the HDVA several hundred, so if capacitor burn-in (100 - 400 ) hours and tube burn-in ( 20 - 30 hours ) holds any truth, this isn't exactly fair. I'm writing it down now for two reasons. I'd like to see if the flavor of the amp changes over the next week and I figure you might as well. Surprisingly at this point the Mainline sounds VERY solid state. I am hoping for a bit more of that tubular tubeiness. But hey if it doesn't deliver... I've a Crackatowa waiting to be built next.

I don't really see any point in filling this thread up with my impressions so I'll just keep updating this post.

The tube has opened up a bit. At least I'm guessing that is the cause of the change given the time frame. Bass, now extends down below the HDVA and with more impact ( Using Bjork - Black Lake for musical test ). Using Audiophile System Test disk and level matched to 66 db with white noise, 10 hz is audible 20 hz is clearly audible on the Mainline. HDVA wasn't audible at 10 hz, was barely at 20 hz and became clear at 30hz. It's hard to call resolution. Sound stage has opened up at bit wider than the HDVA, but the HDVA is still feels more precise. There is just a little bit of tube air and liquidity coming through now. On one of my favorite test tracks Tools 10,000 Day (Wings, Part 2) the Mainline feels less congested, rendered the rain and the thunder with more detail and layers Maynards harmonies more clearly, the cymbal hits are sublime. Though on Tools Reflection the positioning of the drums during the opening is much easier to discern on the HDVA. On the Elfman Track I mentioned earlier, the mainline is now clearly more airy.

I'll be taking the Mainline into the office next week so I can put more hours on it than I can at home. Does anybody have thoughts on burn-in on for the stock dayton caps?

Quick Note after at about 70 hours of burn in

Everything that isn't listening to my HD800's through the Mainline sounds bad. Birds chirping in the trees, bubbling brookes, the waves rolling in on the beach.... all pale in comparison. Ok that's a little over the top, but you get the point. This is the best thing I have heard next to the HE-1 system. Imaging has tighted up. bass rumbles the side of my head, percussion... oh the drums I never loved drums so much, so much attack, so much decay. The only thing I'm not loving is the intimacy of the soundstage, alot of folk don't like the HD800 expansiveness, but it is one of the things I love, the mainline brings it in a bit more than I like.

Also the Ether C is a no go with this amp. Super bright and anemic bass. HD600 is pushed to it's absolute best then left exhausted, because the amp demands something better.


A few weeks and a couple of hundred hours

I flipped the amp over and re-biased the tube. The sound quality had been dropping, most noticeable in the bass and imaging. The A side had dropped to 127 and the B side risen to 152. Everything is back to normal, or better now.

I spent some time going between the music I mentioned earlier. the 10hz frequency is more audible than memory tells me it was before. Bass is still superior to the HDVA in both extension and control, which kinda boggles me, given that solid state is supposed to have quite the edge in that department. Tool 10,000 days is better than I've ever heard it, I can now hear that the bass guitar is a mic in front of an amplifier, the rain drops are very clear, there are dynamics in the thunder that simply can't be heard from the HDVA. The drums at the begining of Reflection are better positioned and more dynamic, in fact the whole of the Lateralus Album is open and rendered with ease. None of the congested mids for which it is known. Of particular note is the cymbal strikes, which I always thought poorly recorded, the whole life every cymbal strike rendered in exceptional detail, the attack is harder the shimmer clearer and the shine longer than the HDVA by a very noticeable amount . Piano's from Saranada Schizophrana is more open with better timbre.

I can't say the there is a night and day difference while listening most of the time. In general the Mainline feels more airy, more holographic and more resolved and controlled in the highs and bass. Drum strikes are noticeably more powerful. I say all of this as though it is night and day, it is not. I'm sitting in a room I've made as quiet as possible listening to Redbook or better recordings and looking for differences.

Does any of this matter in general listening? I think it does, but then the Mainline is infused my sweat and tears, with my little successes and failures, and the stories I've told to friends about building it. It is very difficult to be objective in that light. In fact I'm 100% sure my mainline sounds better than your mainline - even if you are an engineer and upgraded the crap out of it.

I've an EH Goldpin awaiting installation, and two 10uf Mundorf Supremes on their way... but I'm going to enjoy this as it is for another week or two.
Click to expand...

Solarium said:
I'm also convinced that Mainline is a superb combination with the HD800. I do however use the Mojo with the Mainline, have you made any comparisons with the Mojo vs the Gumby pairing with the Mainline/HD800?
Click to expand...

I've not, I've only used the Mainline with the Bimby and the Gumby. I can say that it's the only amp cycled through that made the difference between those to dac's worth the price difference. I keep pondering the Mojo for portable use, but haven't bitten the bullet yet. Saw a Hugo go for the price of a Mojo on ebay last week, so I'm being patient about that purchase.

I have however finally put the about 300 hours on my Mundorf Supreme's highly recommend that ugprade.

Hugo for the price of a Mojo!? I would have jumped on that like a fat kid on ice cream!