I listen to a variety of podcasts and I find myself frequently adjusting the volume and jumping forward and back in time. So I really appreciate Bluetooth headphones having remote controls with separate buttons for controlling the volume and music. Ideally, they have 6 buttons (vol+, vol-, answer call, rew, fwd, play/pause), although a 5-buttons design (integrated call and play/pause) works almost equally well.
My Sony SBH80 recently broke down and I realised that there are very few, if any, such earphones currently on the market. I also could not come up with an easy way to find them with a web search.

So, the aim of this thread is to make a list of such earphones.I will start with the few ones I know and add any one you suggest to the list.

This is a product category that's unfortunately not getting a whole lot of innovation as most BT headset/earsets are integrated, which personally to me is a no-no as the batteries will be hard to find when they die out a few years down the road.

I got the μBTR as I wanted USB C, aptx, longer battery life, and a shirt clip type over 5/6 separate buttons.

Indeed I share you point about battery life and I'm looking for a rather inexpensive unit that I can replace when the battery eventually gives up. I know, it's not ideal, but I prefer the neckband type because it's tangle-free with respect to the shirt clip / portable amp.

I prefer actual buttons, but touch stripes or pads are also fine, as long as they control music playback and volume separately (e.g., no tap vs long press).
The MW600 has a touch strip for volume control and man I hated that. I still have it around, attached to an old pair of Senn PMX100s but tend not to use it exactly for this reason.

The MW07 seem great, I've added them to the list.
But they're way above my budget: I need new earphones for commuting and don't expect to last them more than a few years at most. Though I managed 3 with my SBH80 and actually still don't understand why the microphone suddenly stopped working (they didn't get wet, overly bent, sat on, etc.). Also, I need at least 5-6 hours of battery life.

It looks loke there are not many products in this category. Upon reconsideration, I don't really need separate controls. But I skip forward/back much more often than I adjust the volume.

So I started wondering whether there are Bluetooth neckband earbuds with combined Vol+/Ffwd and Vol-/Rew buttons where short presses will control music and long presses volume. If I understand correctly, usually it's the other way round.
Thanks for helping with a question that is hard to look up online.
Last edited: Nov 12, 2018
foobar2000 - Aune X1 Pro - AKG K 702
Share This Post
post-14594995
Post #7 of 13

Just throwing you an idea: how about a seperated small BT remote to go with a BT headset instead? I know carrying two devices are less ideal, but BT remote is generally very small and allows you to use BT headset with better SQ that might not have the buttons configuration that you want.
My Random DIY Build Thread
Simple Graphical Guide on SE vs. Bal Audio w/ Headphones
@EarbudsParadise
Etymotic ER4S/SR for reference and analytical; Elecom EHP-SH1000 for fun and dynamic; Sen-fer MT-100 for everything in-between; Earbuds when no need for noise isolation.
Share This Post
post-14595491
Post #8 of 13

Thanks for the tip, I hadn't really thought about a separate remote. However, I feel I would mislay it instantly, since I use my neckband headset in a variety of places. Sound quality isn't really that important to me, since I mainly listen to podcasts when on the move.
Maybe I could think of a "Bluetooth cable" with customisable buttons, if such a thing exists.
foobar2000 - Aune X1 Pro - AKG K 702
Share This Post
post-14595589
Post #9 of 13

Hey thanks, I might consider one of those, as they seem to be operable without looking at them, especially the AT and the Xduoo.
Still prefer the neckband design, though, because of less wiring. 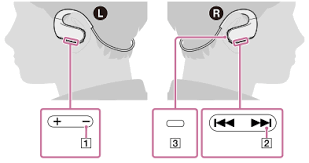 Just giving my thoughts.
I am not an audiophile so my perspective is as a dog walker that needs this functionality. I have 2 dogs with a leash in each hand. It is more convenient to control my audio thru the headset buttons vs opening my smartphone and controlling there.

For me if I want to pause a podcast, answer a phone call, rew or fwd, and I guess vol+ vol- I like separate controls. As of Mar-2020 it seems like everything is getting to minimized number of buttons. Above they have the list of models. I went to Amazon and found the MPows 5th gen but it mentions 3 button controls, and compares itself to the 4th gen (shown above) which shows 5 buttons. I guess I put the 4G on my wishlist whenever one of my current headsets dies. In 2018 I bought a LG Tone device which was nicer than my usual low end stuff, anyway I had to return it because combination of volume and fwd/rew buttons. I guess this scenario (hands busy) apparently don't come up often, so devices like Airpods and other stuff assume complete handsfree. If anyone could make a recommendation as an alternate thing to consider. Thanks.