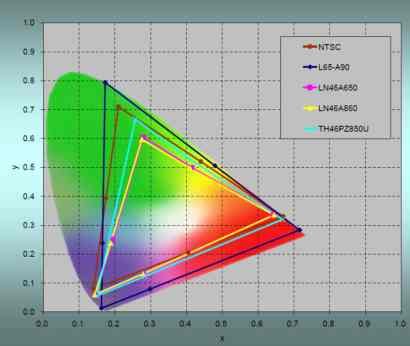 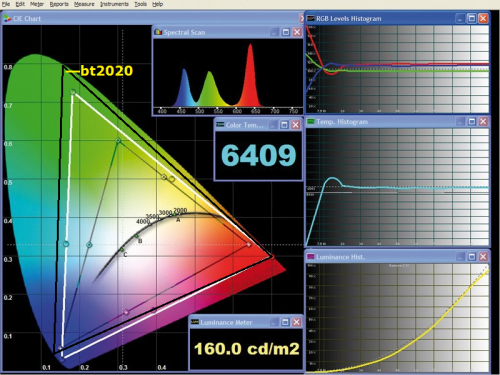 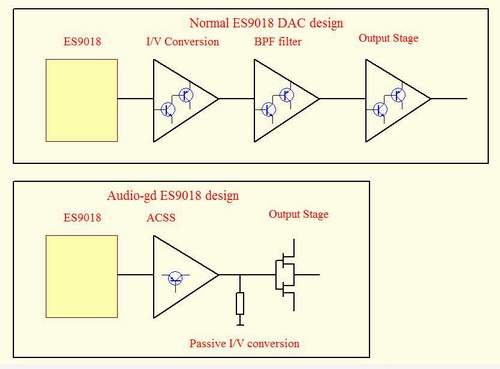 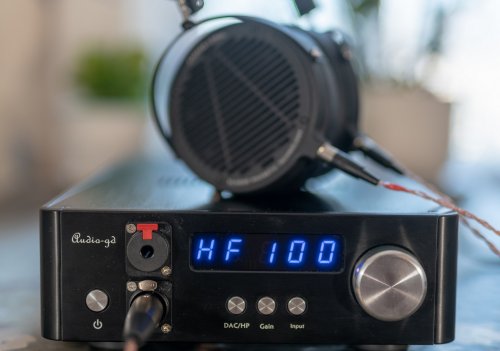 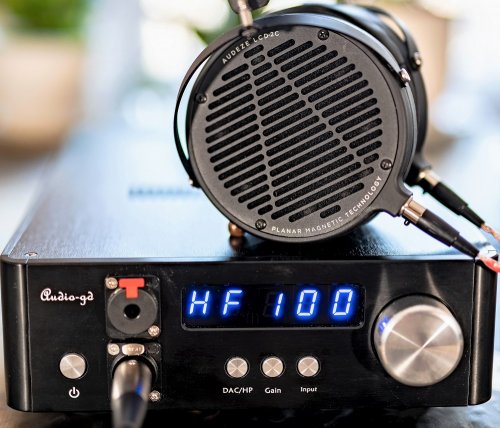 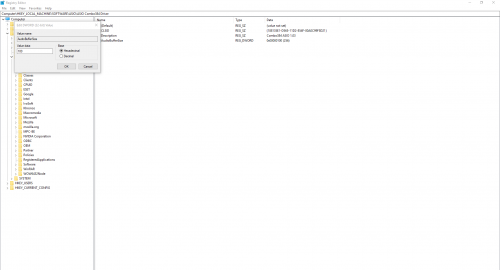 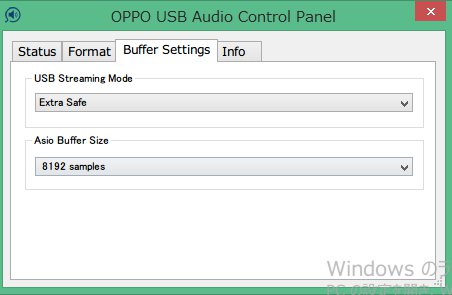 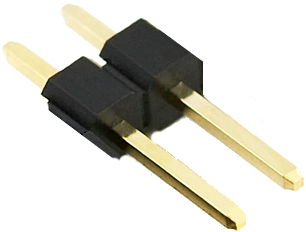 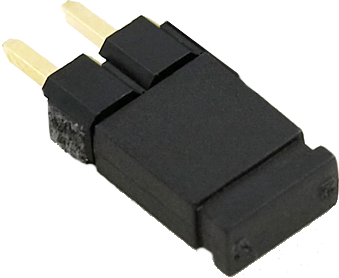 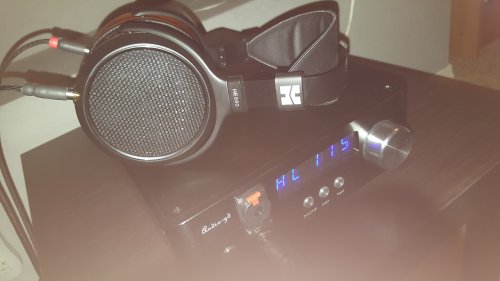 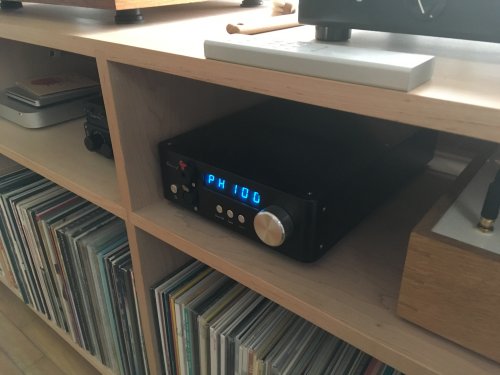 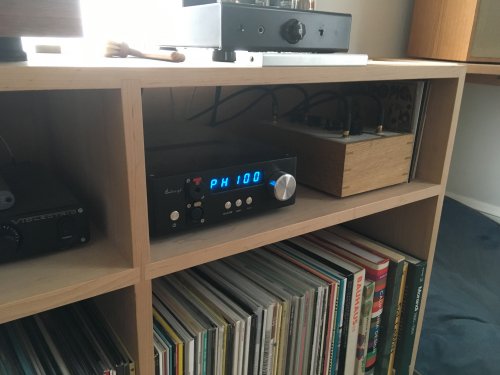 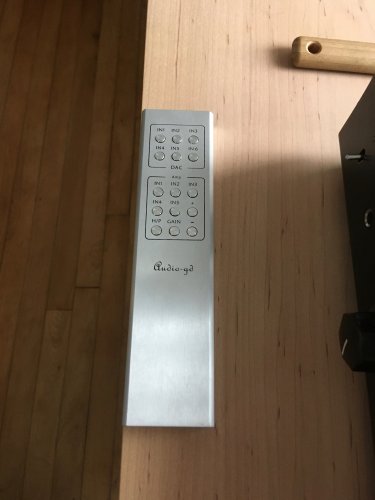 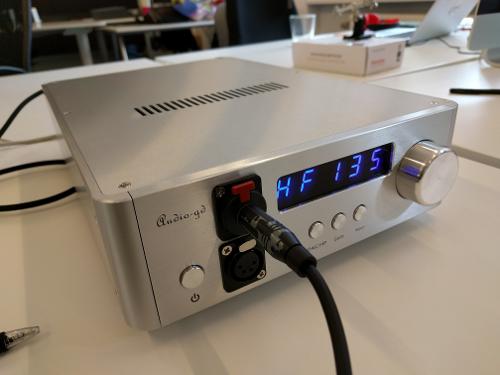 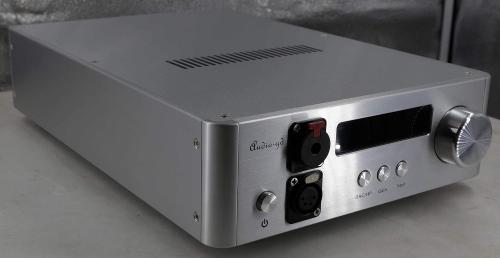 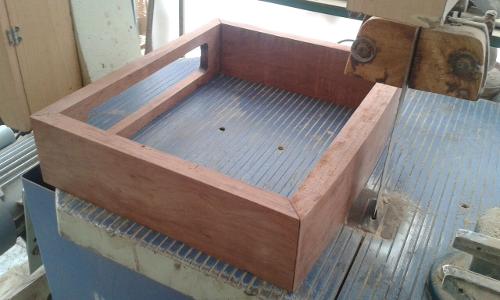 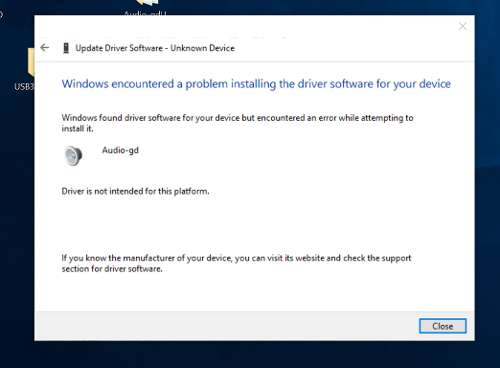 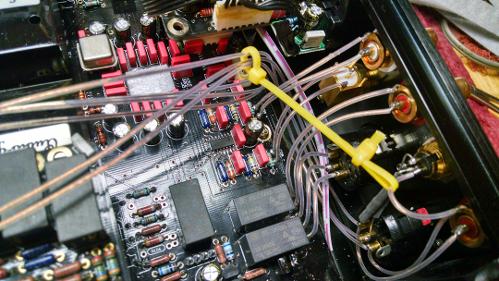 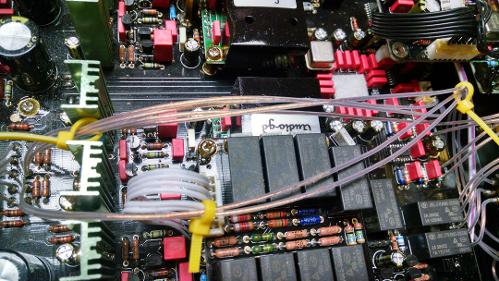 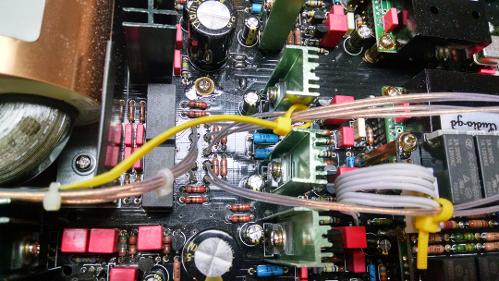 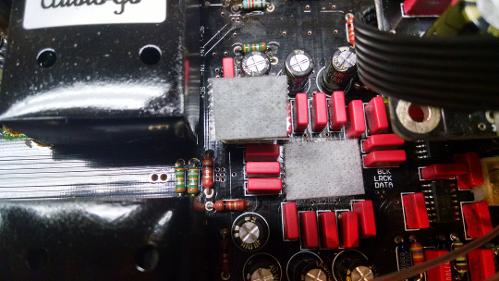 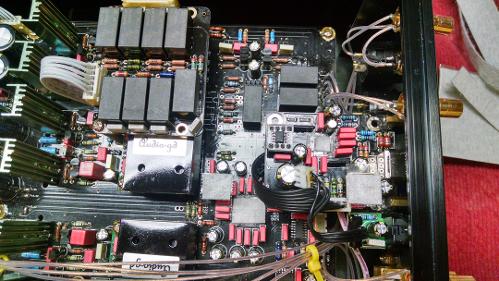 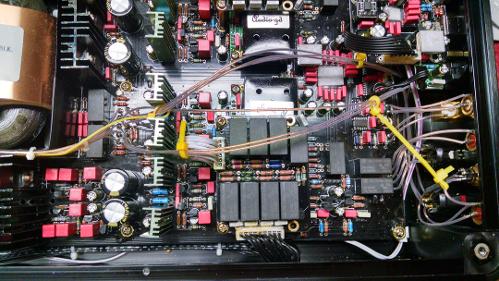 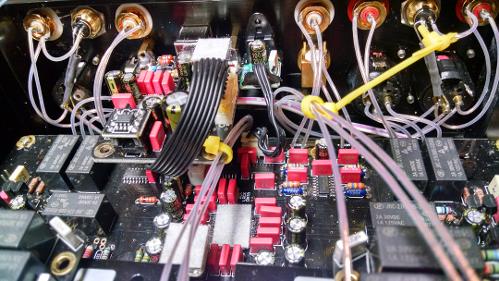 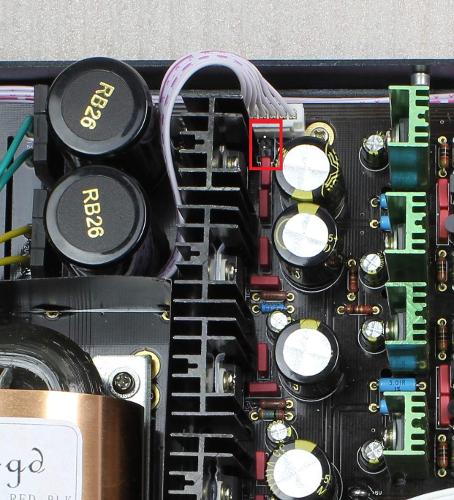 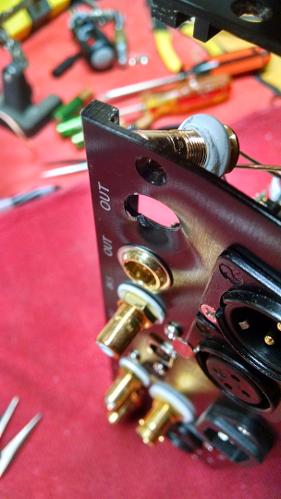 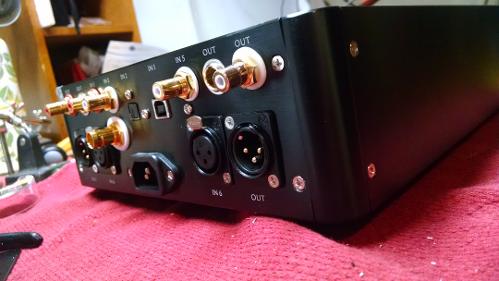 You are using an out of date browser. It may not display this or other websites correctly.
You should upgrade or use an alternative browser.
Audio-gd NFB-28

An output impedance of 2 ohms is not bad, and is sufficient for most applications, it's just that 1 ohm output impedance leaves a bigger margin. In my opinion, the output impedance is likely a tradeoff for the non feedback topology of AGD amps. The noise floor on the AGD kit is generally very low, so it should play well enough with high sensitivity low impedance HP/IEMs.

If your setup is mostly single ended, you should give the NFB-29 some consideration. I don't understand why it never took off, but it should be just as capable as the NFB-28 for most uses. I don't know your situation, but I only went balanced because I wanted a balanced preamp for a stereo setup that I'm now building (with long cable runs). I'm also a one headphone guy, so I don't have to worry about the costs of rewiring a whole collection of headphones.
Click to expand...

I love my older model NFB-28.  My one comment to the thread is be careful relative to both Sensitivity and impedance of the phone / IEM.  I am not an IEM user on this unit, however, I just got a new to me Hifiman HE-X, as an upgrade to my HE-500s.  I did a side by side last night.  I was expecting the HE-X to be ALOT louder than the 500s, for a given output that was not the case at all.  I suspect the Hifiman specs are a bit wonky.

Unfortunately the best path is to always try it, and that I know is not always possible.

BTW, IMHO the HE-X's are an enormous comfort upgrade but maybe a 10-20% sound quality improvement over the 500s, source material dependent.

I'm getting a strange problem on my NFB-28 I was wondering if y'all could help me out with. I run optical from my computer's Xonar DGX into my 2014 model NFB-28. Sometimes I'll get a lot of popping/crackling, that usually fixes itself if I just cycle around all the inputs back to "2 (optical)".  Could that be a sound card problem, drivers, or something in the NFB-28? I'm not sure if cycling the inputs resets the connection with the computer or not, or it'd be easier to narrow down what's going on.
Current: A-GD NFB-28, Audeze LCD-2.2f in rosewood with vegan earpads, AKG Q701, Bottlehead Quickie + PJCCS, Heir Audio 3.ai S, Sennheiser PC163D​
Remember, kiddos, there is no substitute for an audition!​

Sorry to say but that sounds like an NFB-28 issue.

I'm hoping one of you guys/gals could help a prospective nfb-28 owner out. I need some physical measurements, as
its going into a very tight space depth-wise. I'd turn to A-gd, but language barriers...

What I need is 1) Complete depth, including back connectors and volume knob, and 2) Distance from the front end to the front feet.

Also, has anyone here compared the NFB-28 to the Burson Conductor/Virtuoso/v2+? I've searched the internets, and found plenty of comparison with the Oppo HA-1, but not so much with the Bursons.

Burson doesn't appear to have a balanced output option

Return it ASAP or email Kingwa! That's bizarre... the volume control on the NFB-28 is a set of relays, so I have no clue how on earth that problem would appear! Could be a firmware problem, which you might be able to reset.
Current: A-GD NFB-28, Audeze LCD-2.2f in rosewood with vegan earpads, AKG Q701, Bottlehead Quickie + PJCCS, Heir Audio 3.ai S, Sennheiser PC163D​
Remember, kiddos, there is no substitute for an audition!​

The reason for monitor noise is because of the grounds. Have you ever wondered why automobiles use the body of the car as a shared ground instead of running positive and negative wires all over the car? Multiple grounds act like an antenna because it produces a difference in potential and resistance which induces currents we hear as noise. Consider a USB DAC, connected to a computer, and the DAC  connects to powered monitors. The computer, the USB, sometimes the DAC if it has it's own power plug, and the monitors all have their own grounds and the result is picking up every bit of noise in the area.

The reason balanced helps block that is because of the push/pull arrangement of the signal lines which cancels noise out. However all you need to get a noise free setup are a few inexpensive ground loop isolators. They basically decouple the  RCA ground from the electrical ground and this breaks the chain of noise.

jodgey4 said:
I'm getting a strange problem on my NFB-28 I was wondering if y'all could help me out with. I run optical from my computer's Xonar DGX into my 2014 model NFB-28. Sometimes I'll get a lot of popping/crackling, that usually fixes itself if I just cycle around all the inputs back to "2 (optical)".  Could that be a sound card problem, drivers, or something in the NFB-28? I'm not sure if cycling the inputs resets the connection with the computer or not, or it'd be easier to narrow down what's going on.

Optical would isolate the electrics between your computer and your DAC, however if you happen to have the USB cable plugged in at the same time you have any other electrical connection to the computer, it will pick up noise. I'll give you an example, I had a FIIO amp which also had a DAC so it has USB and analog inputs. I went with an external DAC and connected the analog out from it, to the analog in on the FIIO and the noise was awful. The reason for it was the  RCA connections shared a ground between the DAC (and therefore the computer) and the Amp which still had it's own USB cable plugged in. Simply unplugging the amp's USB cable fixed the problem immediately.

pinkypowers said:
Headphone balanced is a COMPLETELY different thing than traditional balanced for stage equipment. Read up on it. This stuff has only been around for a few years. Old-school balanced has been around for ages.
Click to expand...


Well yeah. Pro audio gear all uses XLR even on cheap throw away equipment but it's used so that long instrument cable runs do not pick up noise. The two signal wires are out of phase and summed in order to get the signal. So any noise in the line would be picked up by both wires, and since each is 180 out of phase with the other, when you sum them the noise becomes 0 and you are left only with signal.

Balanced audio for headphones is only a big deal because you want 2 isolated grounds and independant audio paths in order to maximize sound stage and reduce cross channel talk. You don't technically need XLR to do that as even RCA would work provided the internal audio paths were not summed at any point. However 4 pin XLR was chosen by many because it had the 4 conductors and is more convenient than using 2 1/4" jacks (which technically are 3 conductor TRS aka the same number of elements as 3 pin xlr)
You must log in or register to reply here.