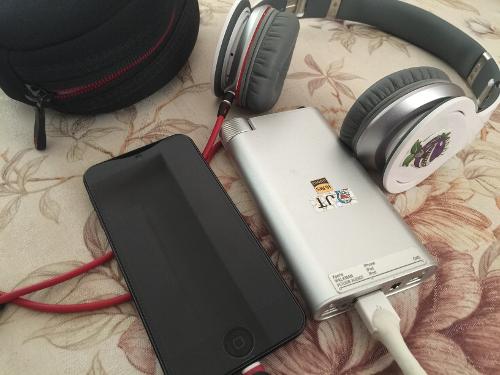 You are using an out of date browser. It may not display this or other websites correctly.
You should upgrade or use an alternative browser.
Apple Touch 6G 128GB - Info and impressions 5G vs 6G

day two
via headphone out 
*Hoping this new model finally brings hi-rez playback (currently at 16/48 max output unless with CCK).
-UPDATE: Touch 6G plays back at standard 16/48. Hi-Res playback only with CCK and external DAC.
Instagram audio pron and memes https://www.instagram.com/headpie/
*My opinions are those of a possibly tone deaf hobbyist.

Touches actually do 24bit. I've forgotten if it tops out at 44 or 48k with that word length. I agree that higher bit rates should be available, especially is an SD slot is available. I don't see apple willing to lose funds in the HiDef software market so I'd fully expect HiDef on this one.
Feedback  http://www.head-fi.org/forum/thread/482354/goodvibes

Touch does playback 24 bit files but it only comes out at 16 bits, even with an external Dac/amp.

cypher labs has a great article on it.

https://www.cypherlabs.com/bit-rate-frequency/
Instagram audio pron and memes https://www.instagram.com/headpie/
*My opinions are those of a possibly tone deaf hobbyist.

Sign me up. I really enjoy the sounds of the 5g...

As long as it still allows a digital line out like the 5th Gen with the CCK Camera Kit I will be picking one up.

Every audio industry insider I've spoken to believes that Apple's only logical move with their upcoming to-be-named streaming service (based off Beats) is to leapfrog Spotify, Rhapsody et al and go straight to lossless streaming, ala Tidal... Basically shut down Tidal before it gets a real market in the states, and hold a higher quality streaming experience over the other competitors... Sounds like a very Apple thing to do. Not to mention they already have the whole ecosystem in place for a high-res music service... Just seems like an easy slam-dunk. Of course once they open that can of worms, they are going to want to have market domination for years to come, so I'd imagine they would work out apple-branded versions of even higher-res formats as well... And I'd imagine any iPod released soon will probably be able to play a myriad of high-res files as Apple works out what they will do on that front over the coming years.

In any event, both the new Apple streaming service and the 6g iPod Touch are rumored to debut at WWDC, so maybe we'll see...

expatinjapan said:
Touch does playback 24 bit files but it only comes out at 16 bits, even with an external Dac/amp.

cypher labs has a great article on it.


I could have sworn I saw 24 bit out of a wadia 170 dock but ultimately, it doesn't matter and I defer. It certainly didn't do high bit rates like we're hoping for from the new model..
Feedback  http://www.head-fi.org/forum/thread/482354/goodvibes

its all a bit of a mystery.
Instagram audio pron and memes https://www.instagram.com/headpie/
*My opinions are those of a possibly tone deaf hobbyist.

Due in the fall.

`The iPod Touch 6 will run with the latest iOS9 and powered by an A9 microprocessor.

The famed media device works with a 1 GB RAM and an expandable memory via micro SD up to 128 GB.

The iPod 6G is said to come in two variants - the 4.7 inch and 5.5 inch versions - both of which has a Retina display.

It will also come in six color variants which are silver, pink, red, blue, space gray, and yellow.`

*I am particularly interested in the possible SD Card memory as my current 5G model is often taken over by photos.
(I doubt they would go with SD memory).

*Also the different sizes are appealing.

I doubt there will be an expandable Memory, my guess, there will be 128GB inside like the iPhone 6 and iPod Mini 3, more intresting would be that they release two models, a multi-meda one and a Music only dedicated one, so they can save costs on camera,etc and concentrate on the best Sound possible.

Chances of expandable memory are less than zero.

I'm betting it will either equal or better the current iPhone... An iPod 6g with more memory than the iPhone 6 would ramp up demand for the iPhone 6.5, since the phone model refreshes usually offer larger memory options....

Most buy Iphones with less than max capacity. Expandable memory would make it most desirable for many and the Iphone no longer sells in a vacuum. It competes with some very capable Android models. It's not just competing against itself. That said, memory is probably not that big a deal for the great majority of users. As a dedicated music player it would be much more desireable for competition with a touch 6. Of course, if they want it to be water resistant, they may not do expandible Memory and it's possible that Apple sees expandible memory as a point of failure and consumer complaints due to outside sources of defects. It's all a pipe dream at this point.https://www.youtube.com/watch?v=MqYWCU0AI8I
Feedback  http://www.head-fi.org/forum/thread/482354/goodvibes

Gotta fill the gap since the loss of the 160gb classic.
Instagram audio pron and memes https://www.instagram.com/headpie/
*My opinions are those of a possibly tone deaf hobbyist.

Yea, as appealing as expandable memory is, there's no way Apple would be including that in their devices

I keep hoping we will see one. Maybe we will, especially with Apple launching Apple Music (new streaming).
You must log in or register to reply here.