TMP Ant - a pint sized Goliath
Pros: Clean, pure, yet not too analytical sound. It can drive probably any headphone.
Cons: A bit light on the bass.

I would like to be clear right at the start, the while I met several times with the man behind TMP I am in no way associated with the manufacture, I have no interest in selling their products and I paid for this item full price.

That being said, TMP is a small Hungarian manufacture. One unique point is the so called "direct tube drive" circuit. All the products (DA converters, integrated amplifiers, phono equalizers and headphone amps) makes use of it. A small tube drives a FET output stage, but in a rather unconventional way. I managed to fish out some technical details from the designer, but I am not sure if I am allowed to write about them...but it is definitely not a "me too" solution.

Before I dive in, a bit of backrgound and playground

The system in which the TMP Ant is used:

As for music. What I most listen to is indie, alternative, electronic, mix-tapes. Nothing "audiophile".

It is a product. I mean, it does not look like a DIY effort. The casing is well done, the typography is spot on, everything feels solid. I really liked the small wooden boxes. 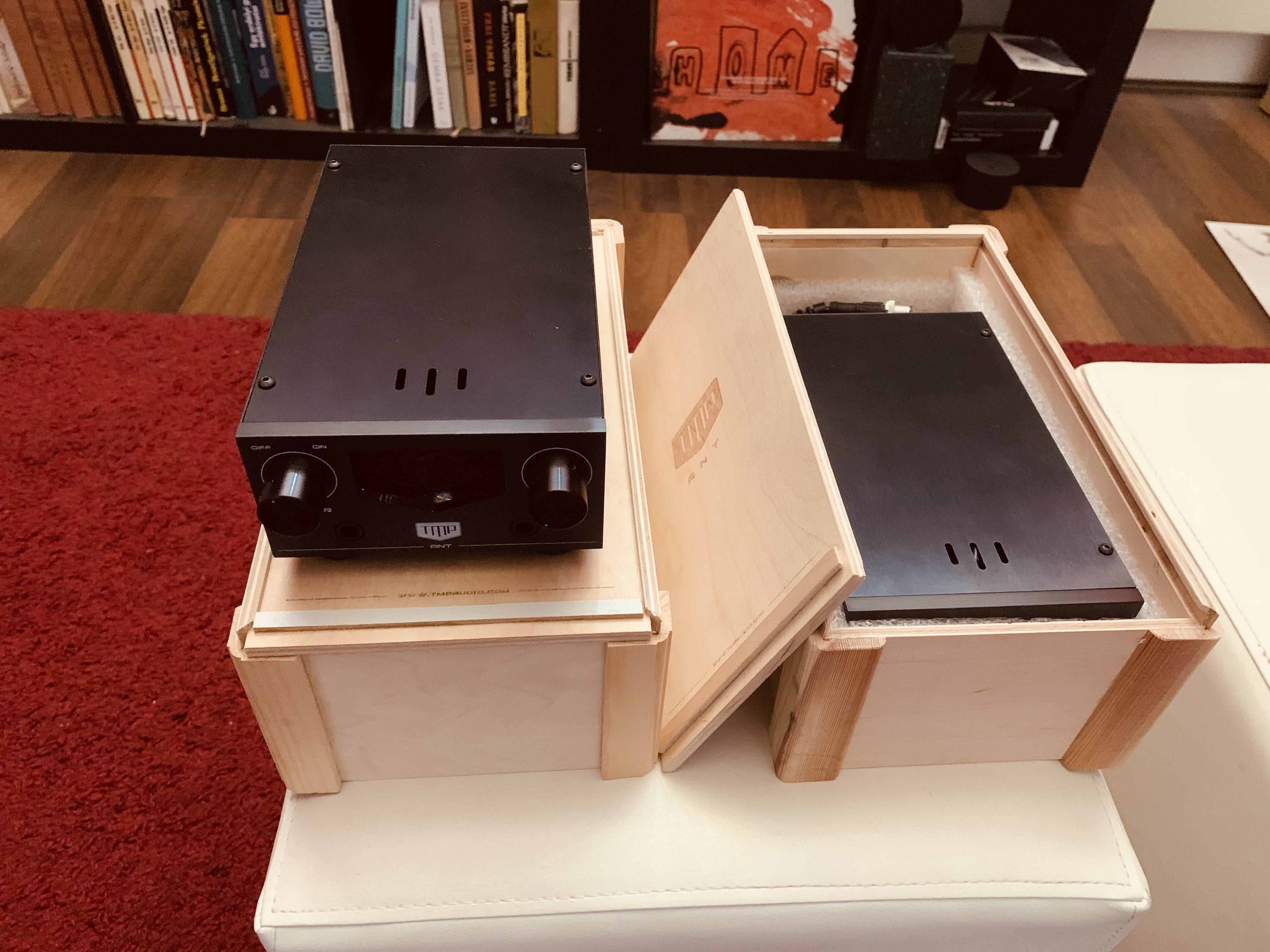 There are some customizations available. Mine comes with a TKD volume pot, which has very satisfying small clicks. The headamp unit does get warm when used (not uncomfortably), the PSU not.

Also, mine is a pure headamp version, but in stock form it also has speaker binding posts, because this little unit has output capacity of 9W to 8Ohms! I heard them driving speakers without problem. Which means, it won't have a problem with a headphone.

The version with the external PSU was a custom job for me, but my understanding is, that it can be ordered now by anyone. It was important for me, because only the external PSU granted absolute noiseless operation with my Grados which are quite sensitive. Actually, this is the only headamp, which has several watts of output power and at the same time completely silent with the HEMP (being the most sensitive Grado).

Some of the capacitors can be configured too (to have better one), mine has better versions of Mundorf.

It has two headphone outputs (low and high impedance output).

Price of the base version is 600 EUR. 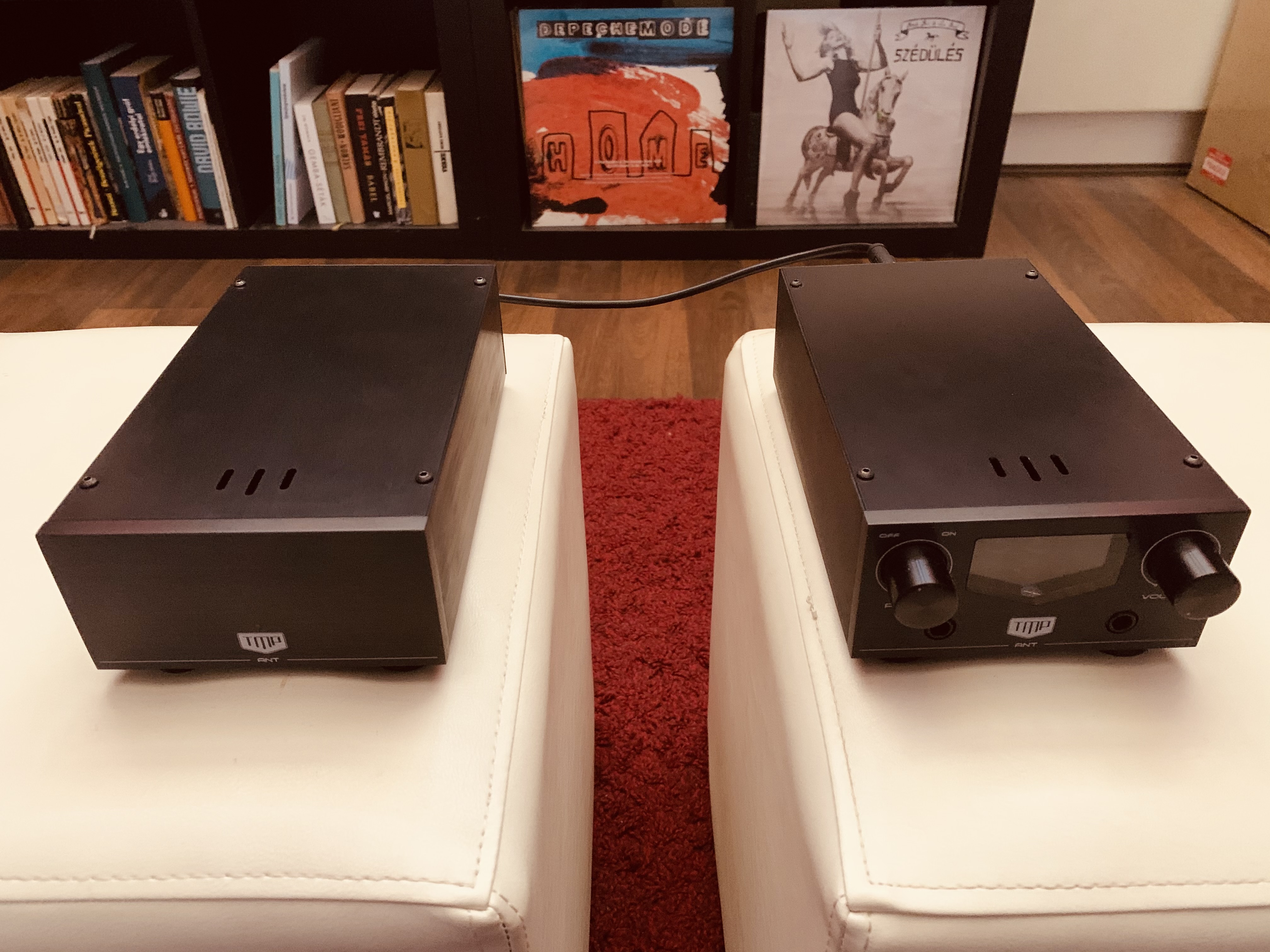 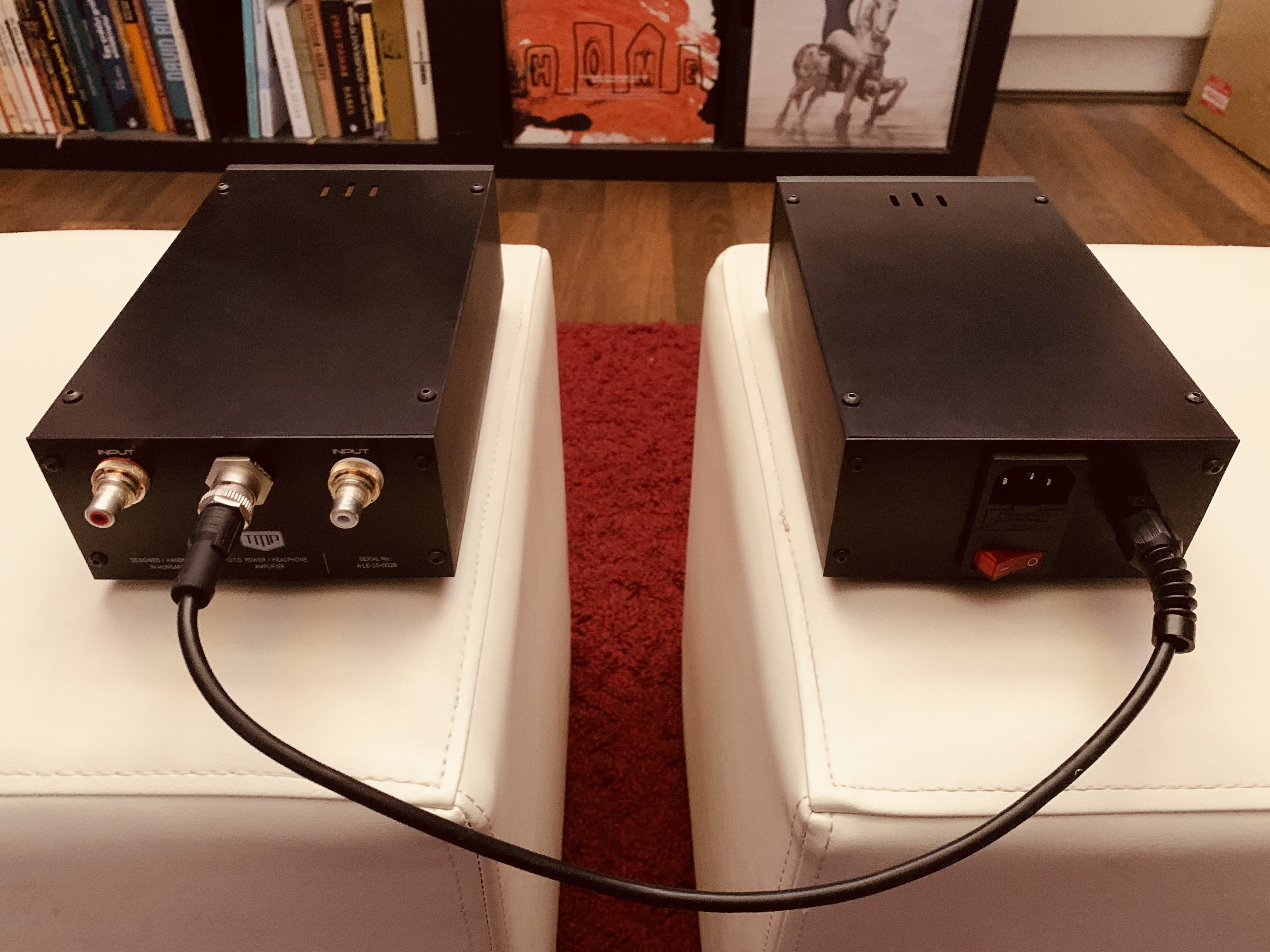 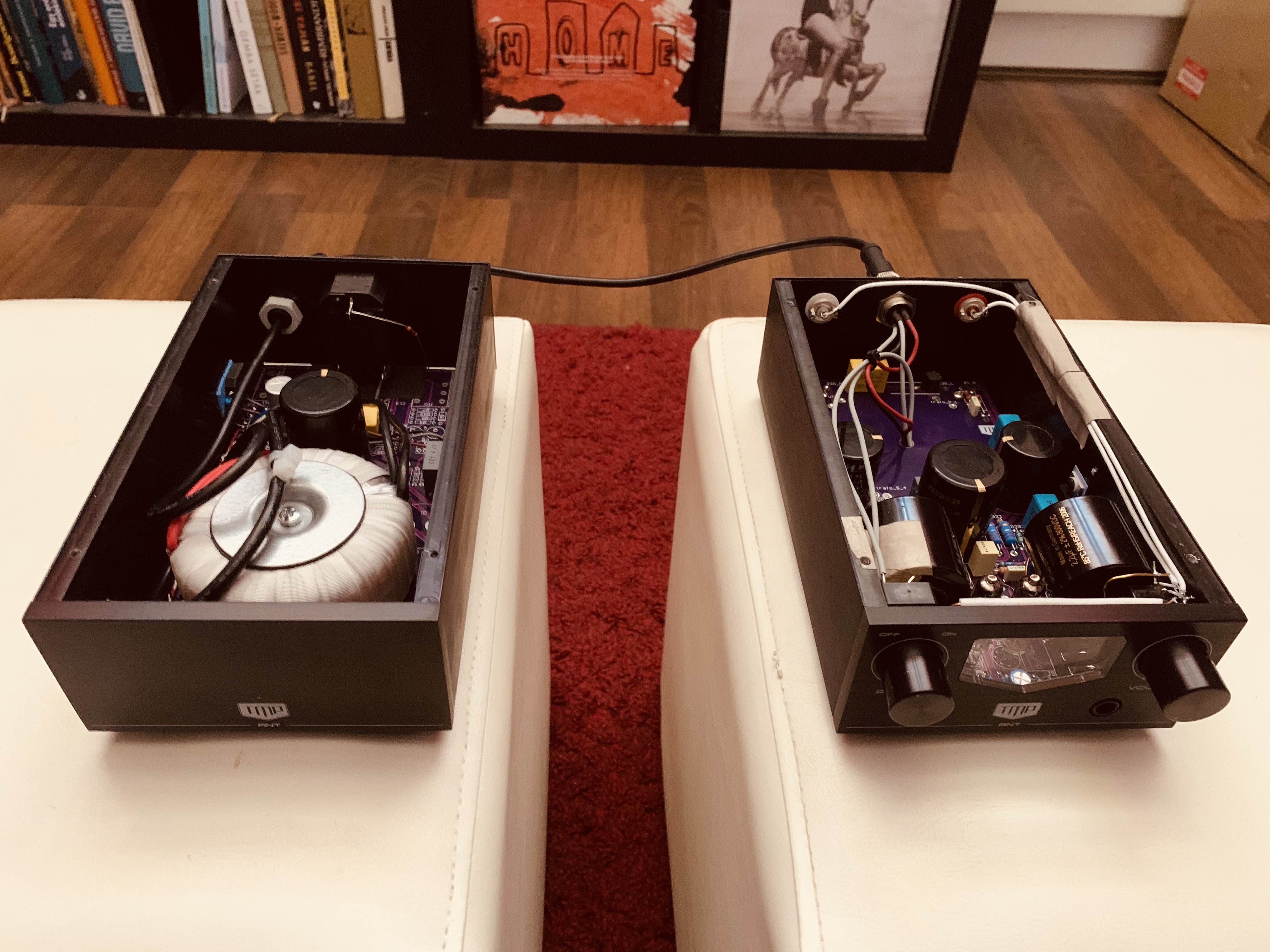 These amps have a very clear sound signature. Not in a wrong, analytical meaning, where the sound is dissected to pieces, rather like "pure water". Although there is plenty of power available they do not hammer my Grados to pieces. Interestingly I find them rather intimate sounding. That coupled with the clarity is a very pure form of music listening. Luckily it does have a feel for rhythm, so music still sound like music, but it is a bit light stepped. It does not march like a 100kg SWAT soldier. A more speedy 50kg maybe...

The bass has quality, color, resolution and speed but it is not a last word on quantity. It is not a steam-drived loose funk machine. The bass has this pureness too, which characterizes the rest of the spectrum. Vocals are human because of this pureness, the resolution and clarity shows all the little details which in turn are presented as "real". And - maybe because of the tubes - the highs are never fatiguing or piercing. They are simply...there. As a part of a whole.

As for paring it loves to play with the HP2i (which is much harder to drive then the recent Grados). Both the HP2i and the Ant are really pure, honest performers. Together they are nothing sort of breathtaking, mostly by acoustic music. The Cascade loves the Ant too, because the Ant helps to even out the sometimes excessive bass of the Cascade. It lends speed and resolution to it, EDM is really outstanding with this combo.

So, in a nutshell I find the Ant a fantastic performer which is not ashamed to have a character. This "review" is probably mostly informal, since TMP is not very well known outside Hungary. But I do know about international sells and if someone fancies something new I can wholeheartedly recommend it.

At least a picture of the system...the contrast between the Helené and the Ant is definitely there. But hey, it is called Ant for a reason 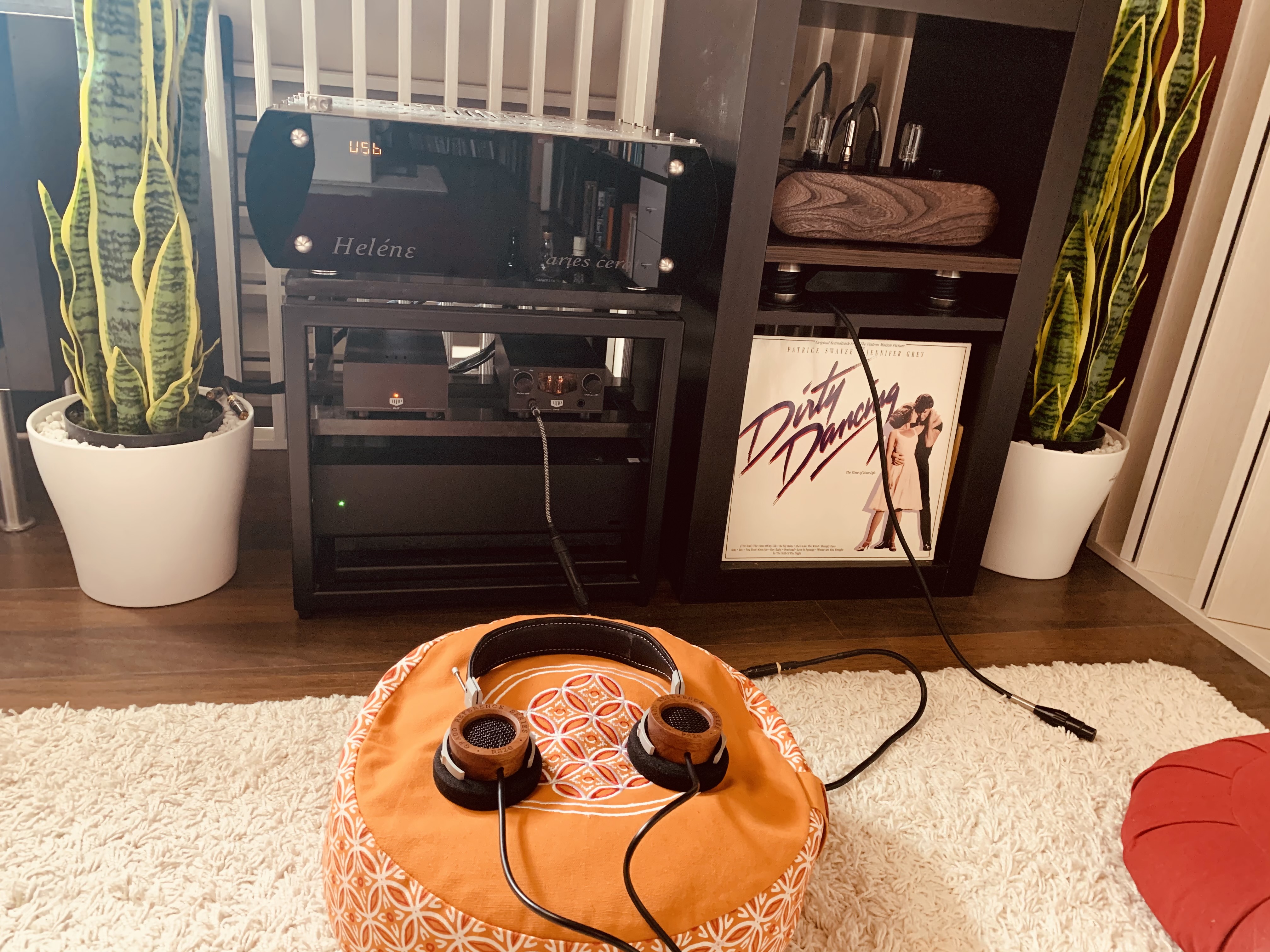 John Massaria
that 88lbs dac is insane!! thanks for review- how much is that headamp anyway? and will it work with 110v?

carboncopy
It’s not a universal PSU, but I am sure it can be done for 110V too, must be specified by ordering I think.

As for the price...it surely depends on the components inside. I could almost tripple the base price with the external PSU and the big Mundorf caps. But since then the base variant became upgrades too...maybe I write a note for the company, they can chime in if they will...

carboncopy
(Edited the post with the price of the base variant.)
Read more…